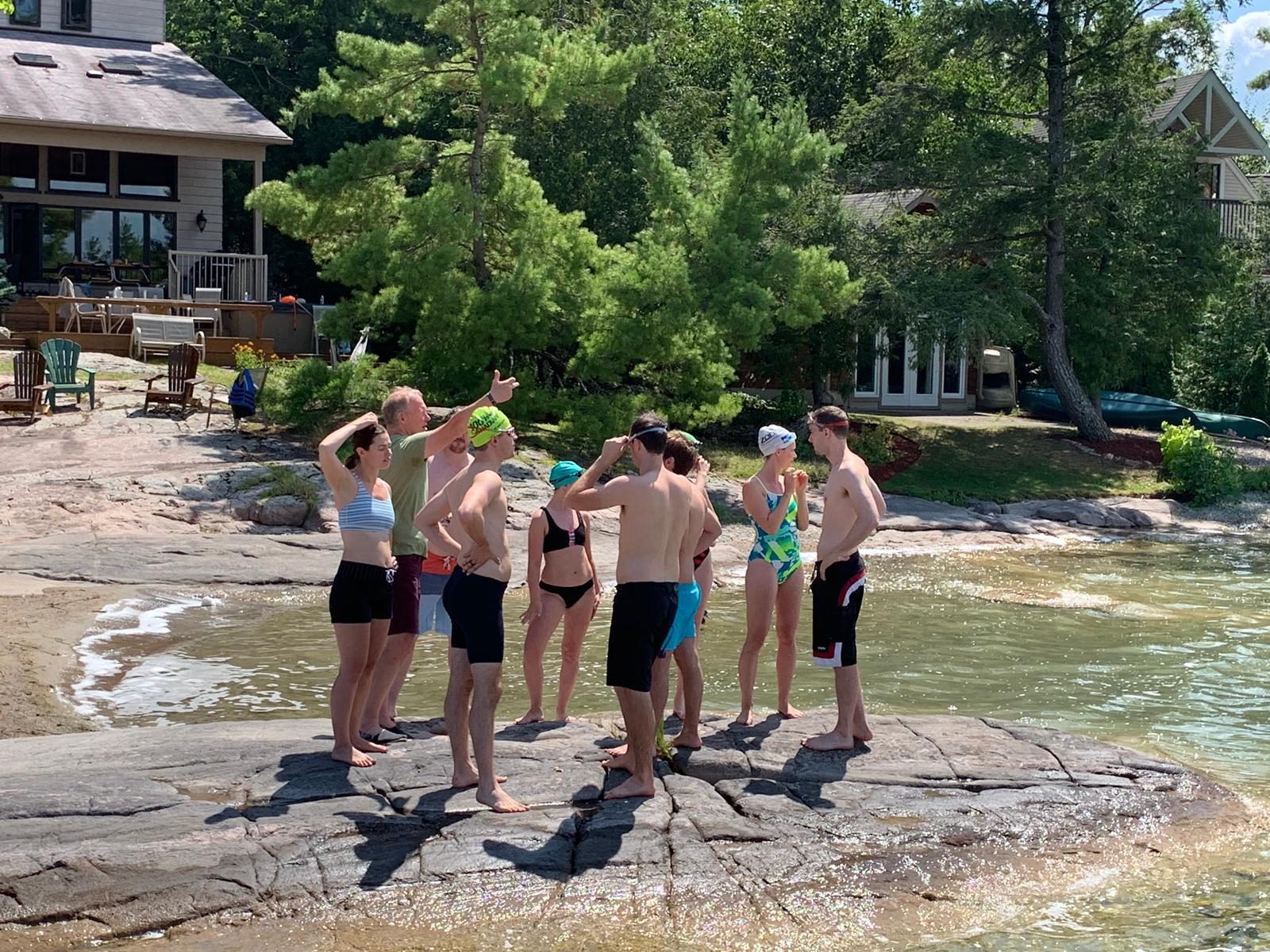 The Sandy Lake Triathlon is a special event. It takes place at random times throughout the summer, on a family-owned property near Buckhorn, Ontario. It has never had more than 10 participants and you can’t sign up in advance. There’s also a special twist: you are required to use the kit that’s onsite, including a range of bicycles, some of which are very, very old.

The Sandy Lake Triathlon is an annual event organized by my husband’s family – usually once a year. With a family of fitness lovers and keen triathletes, it seemed natural to do a family event. It started as a one-off about 10 years ago, but it has carried on nearly every year since. In fact, for many members of the Markham family, this was the very first foray into the world of triathlon.

And don’t think this is a casual thing. We take it all very seriously. One year, I even made t-shirts.

Every element is timed and recorded by willing family members or cottage guests. Diligent records are kept from past events and there’s a briefing before the start to check kit, explain the route and transition areas. This year, the course briefing was done by my husband’s uncle Keith, who has his own triathlon coaching business. It all felt very official. 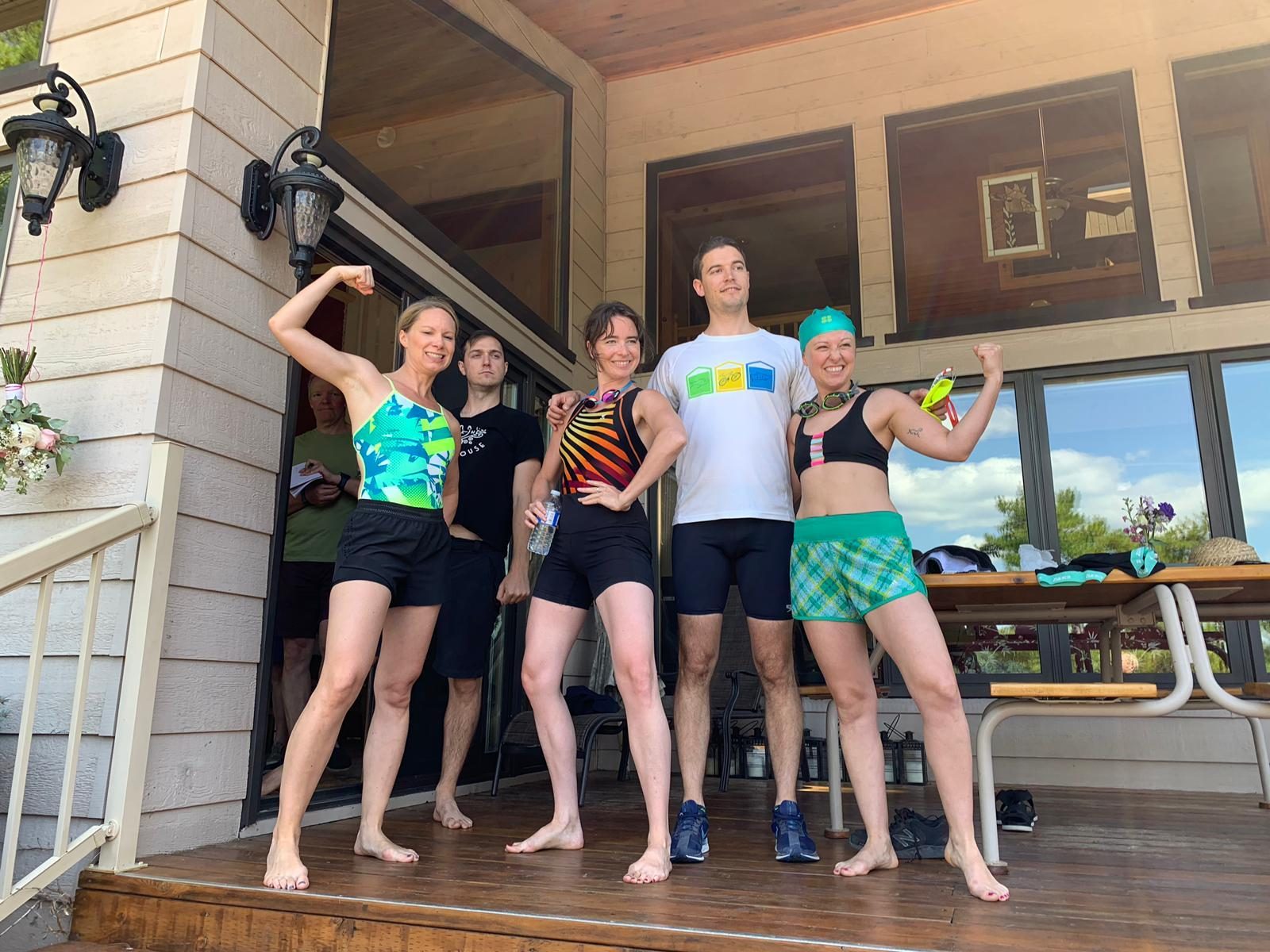 In terms of distances, the event is an odd one. Somewhere between Tri-a-Tri and Sprint distance, The Sandy Lake Triathlon includes a 300 metre swim, a 10km cycle and a 3.8km run (an out-and-back course to the top of a fire route where half of it is uphill!) 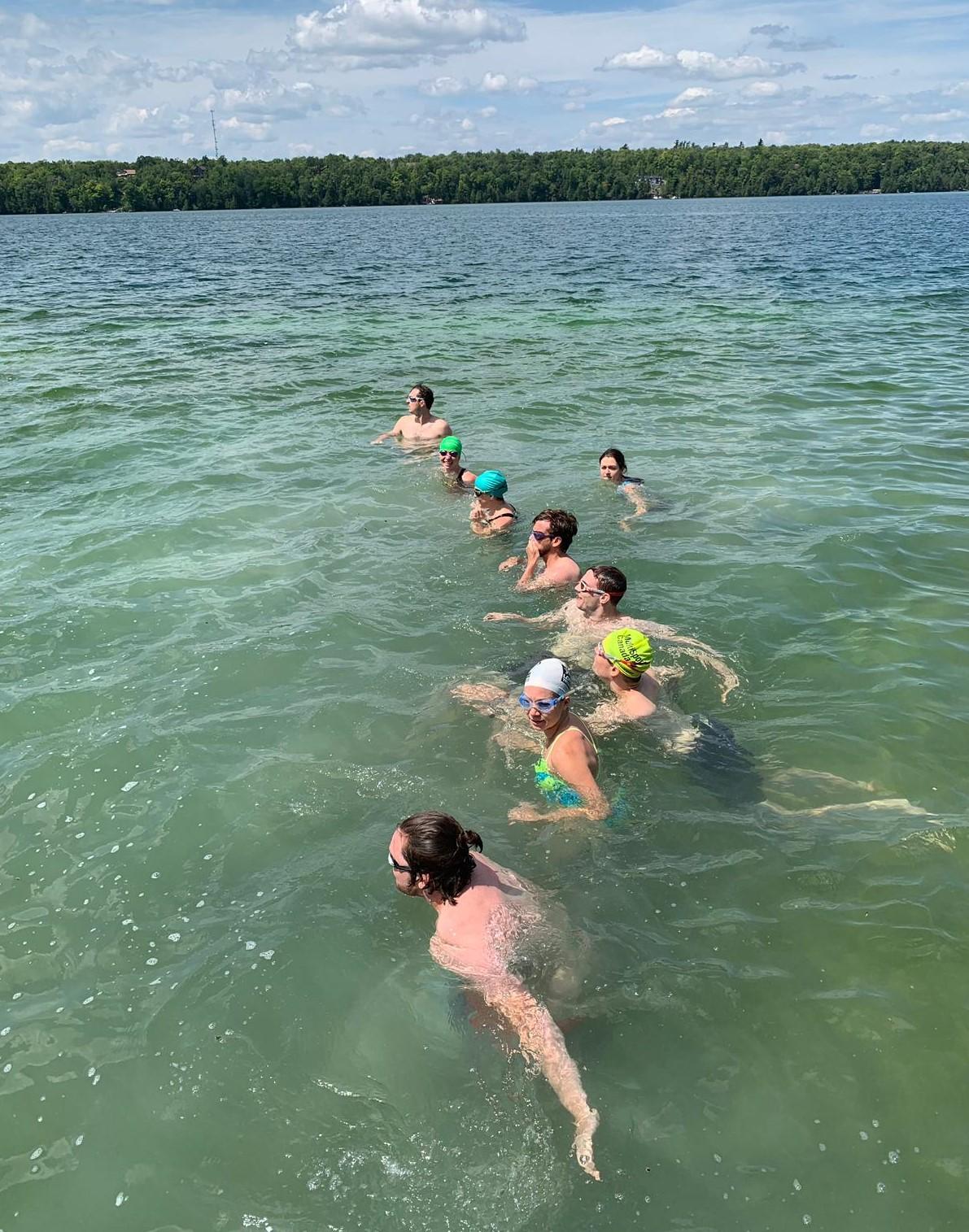 Sandy Lake provides the perfect water for the swim portion of the event. Clean and calm, the neighbours don’t seem to mind that we use their floating dock as a turnaround point. 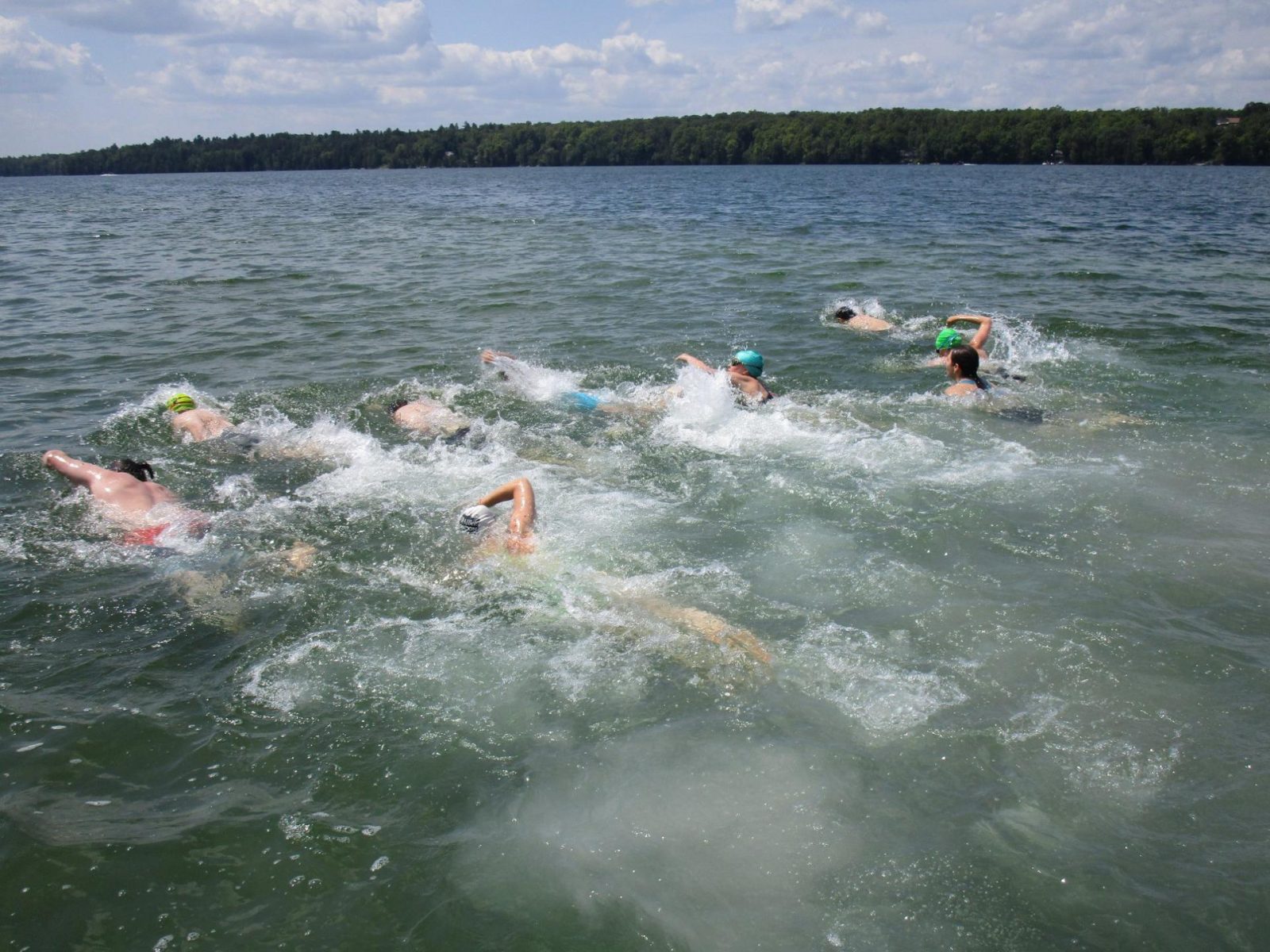 The bike portion of the event presents a few unusual challenges. As I mentioned, all participants are at the mercy of whatever bicycle they are assigned. Thankfully, the Markham family own many bicycles, but unfortunately, they are not all of a similar quality. I lucked out and got to ride my own 20-year old mountain bike. This bike – The Vertical Triumph – is the very first real bicycle I ever owned. I got it as my “big-girl bike” after I outgrew my bike with purple tires and training wheels!  It now lives at the cottage and is probably ridden once a year for The Sandy Lake Triathlon. Even though it weighs about 20 kilos, the gears still work, which is a big plus. 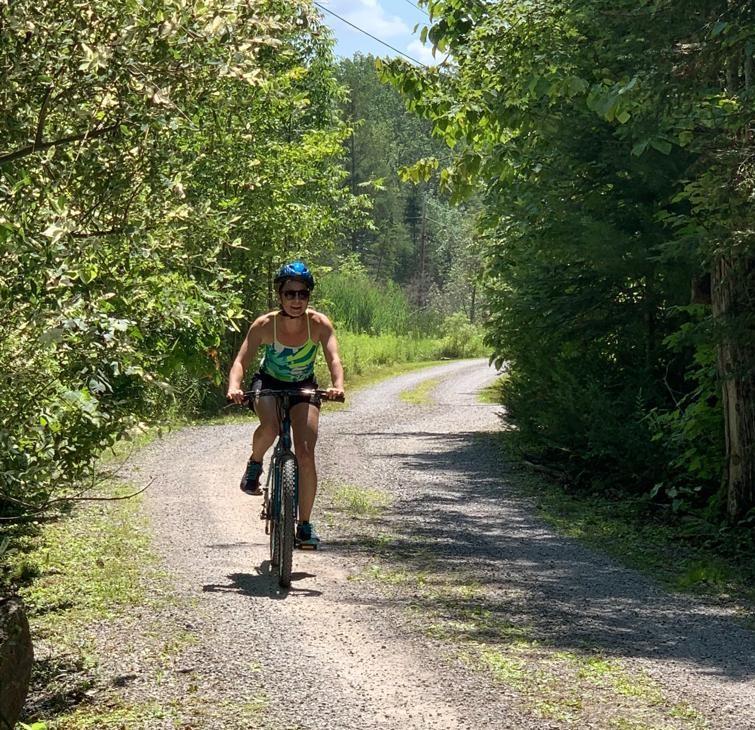 Graham, on the other hand, was not so lucky. He got a very old, rickety bicycle with a single gear. I just shouted to him from where I’m writing this and asked him to describe his bike. He said, “It was like a WWII relic that was brought up from the bottom of the ocean. And it should have stayed there.”

This bike was most certainly not built for racing. It barely functioned and could not go up hills of any size. At one point, I think he got off and walked. Needless to say, he struggled significantly. Even a super-fast swim and reasonable run couldn’t spare him from last place with this clunky bike. We suspect this bike may be retired after this year’s event. 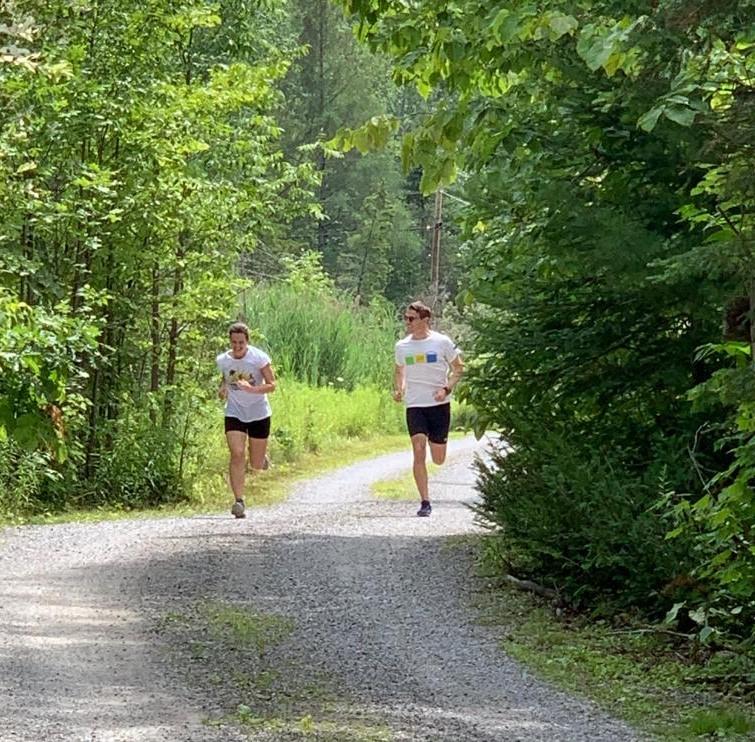 The run, as usual, was my favourite part. As soon as the Vertical Triumph landed in transition, I shot off like a rocket, ready to catch Carly, who was in the lead. Familiar with the route, I really believed I could catch her, but my legs were burning after a tough 10km on a heavy bike.

Fellow competitors Kristen and Alan probably would have been faster, but unfortunately, they missed the bike turnaround point (marked by a black bag on a street sign!) and went a few kilometers too far!

In the end, I came in second overall in a field of 8 finishers. But I won the run portion of the event in a time of around 18 minutes! 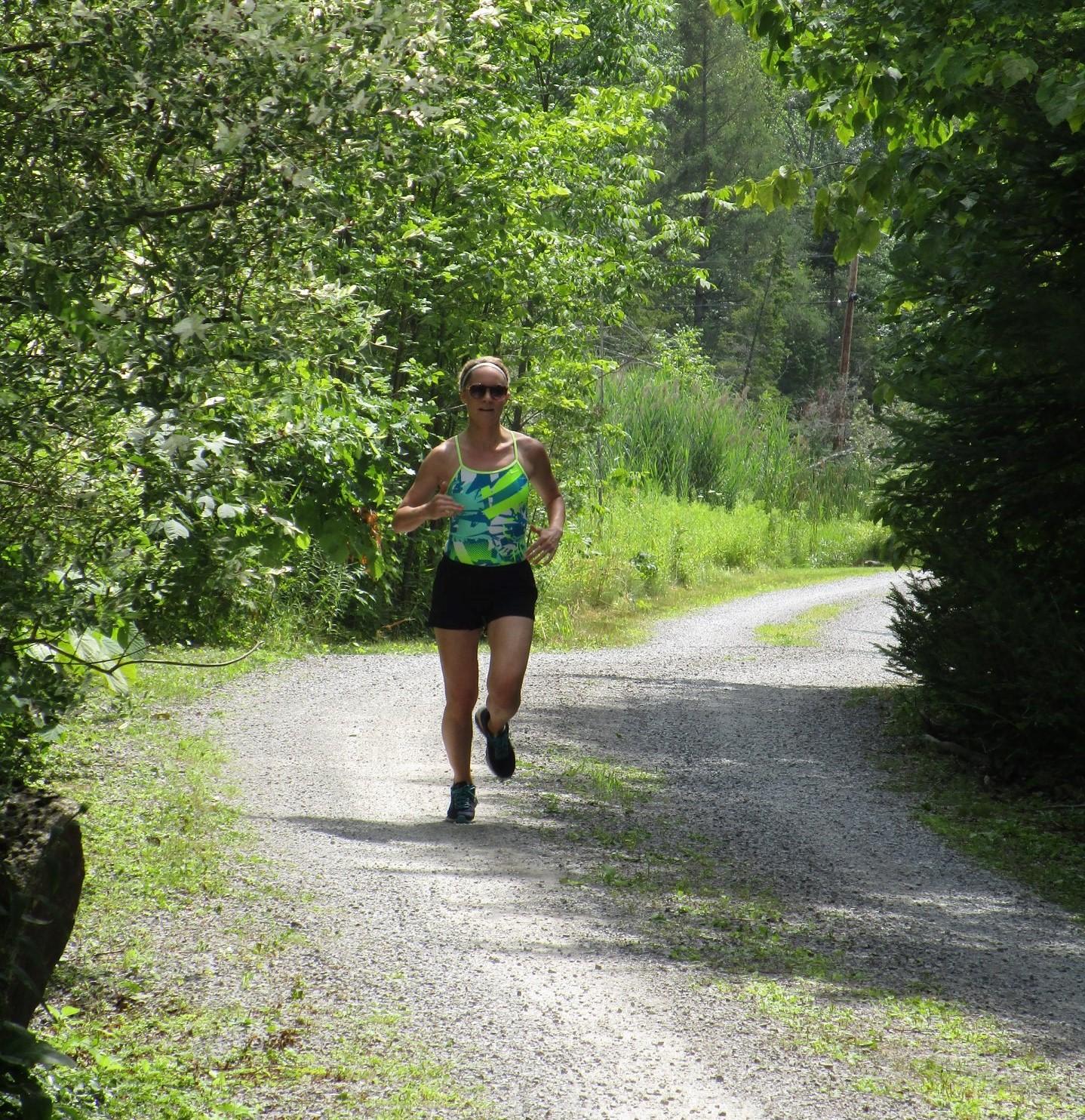 It was a significant challenge! Especially for a group of people who had been out late drinking the night before!

Afterwards, we pulled out the old records (scraps of paper where times have been furiously scribbled for all past participants). I was pleased to see that I have continued to improve over the years, knocking off about 10 minutes from my original time! One day, we really must digitize these results. 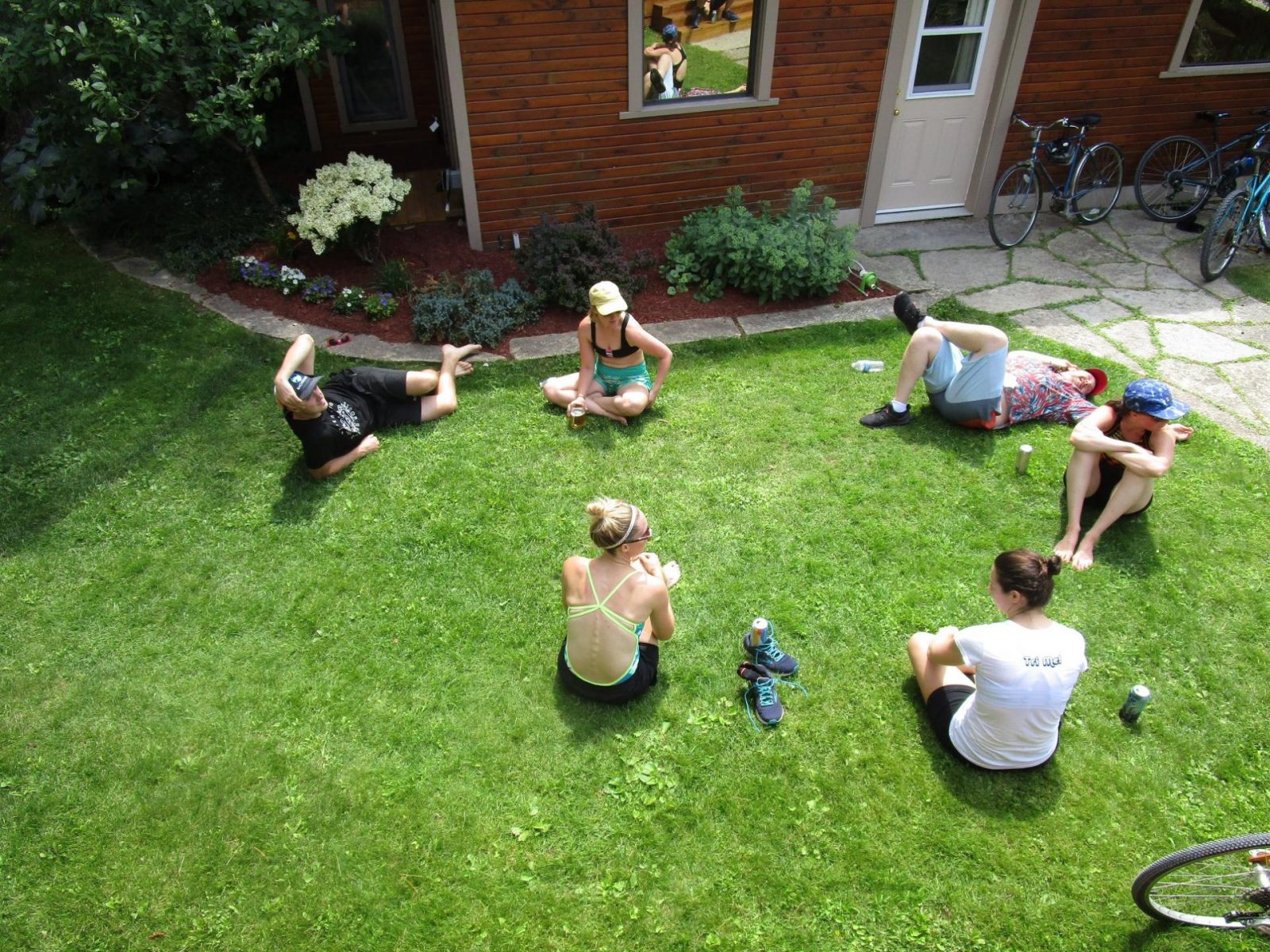 Big thanks to the nine competitors in this year’s event! It was such a good time! And thanks to the Markham family for coordinating this special triathlon and keeping track of the results over the years! And thank you to our volunteer timekeepers, photographers and cheerleaders!  It was a definite highlight of our trip home to Canada.