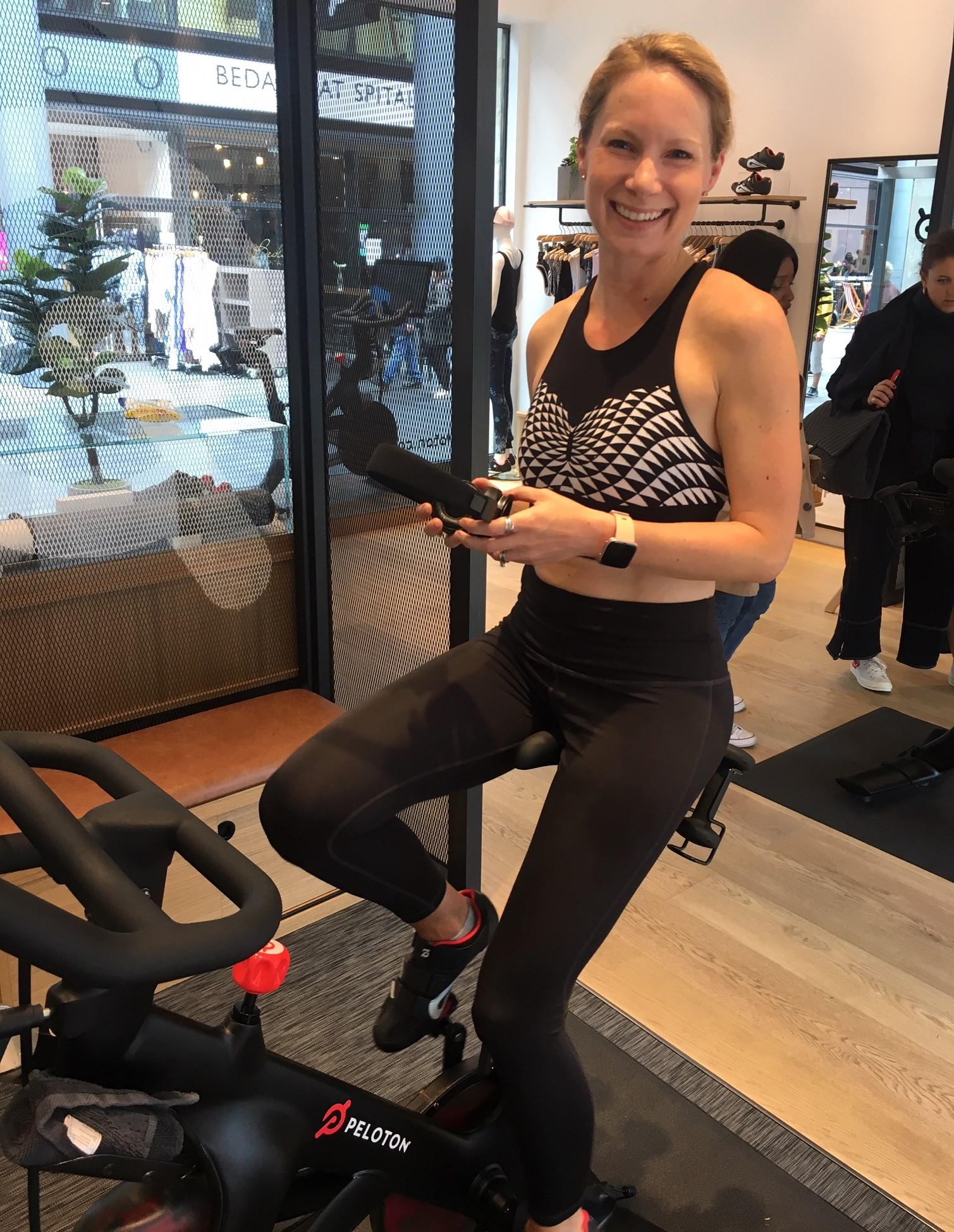 First off, I feel it is important to inform you that this is not turning into a cycling blog. I still love running. Don’t worry. But I do also like cycling. Particularly indoor cycling.

I’ve been following the UK launch of Peloton with great interest since the brand arrived on this side of the pond late last year. Peloton is an American exercise equipment and media company which was founded in 2012. The company is based in New York City and its main product is a luxury at-home spin bike that lets you tune into live classes through a 22-inch HD, sweat-proof, touchscreen.  You can stream 14 daily live classes and 8000+ on-demand classes without leaving the comfort of your own home.

The company is generating major interest, especially among celebrities. Leonardo DiCaprio, Michelle and Barack Obama and Ellen DeGeneres are all well-known fans. With that kind of endorsement, it’s no wonder that the six-year old company generated $400 million in sales last year, more than doubling its revenue from the previous year.

The bike costs approximately £2,000 and the digital subscription service is another £40/month.

It’s not a small investment. It was going to take a pretty magical bike to convince me it was worth the cost. I also had many reservations about the experience. Would a live streamed class feel as immersive as a real class? Would I even feel motivated or would it be like a lame workout DVD? 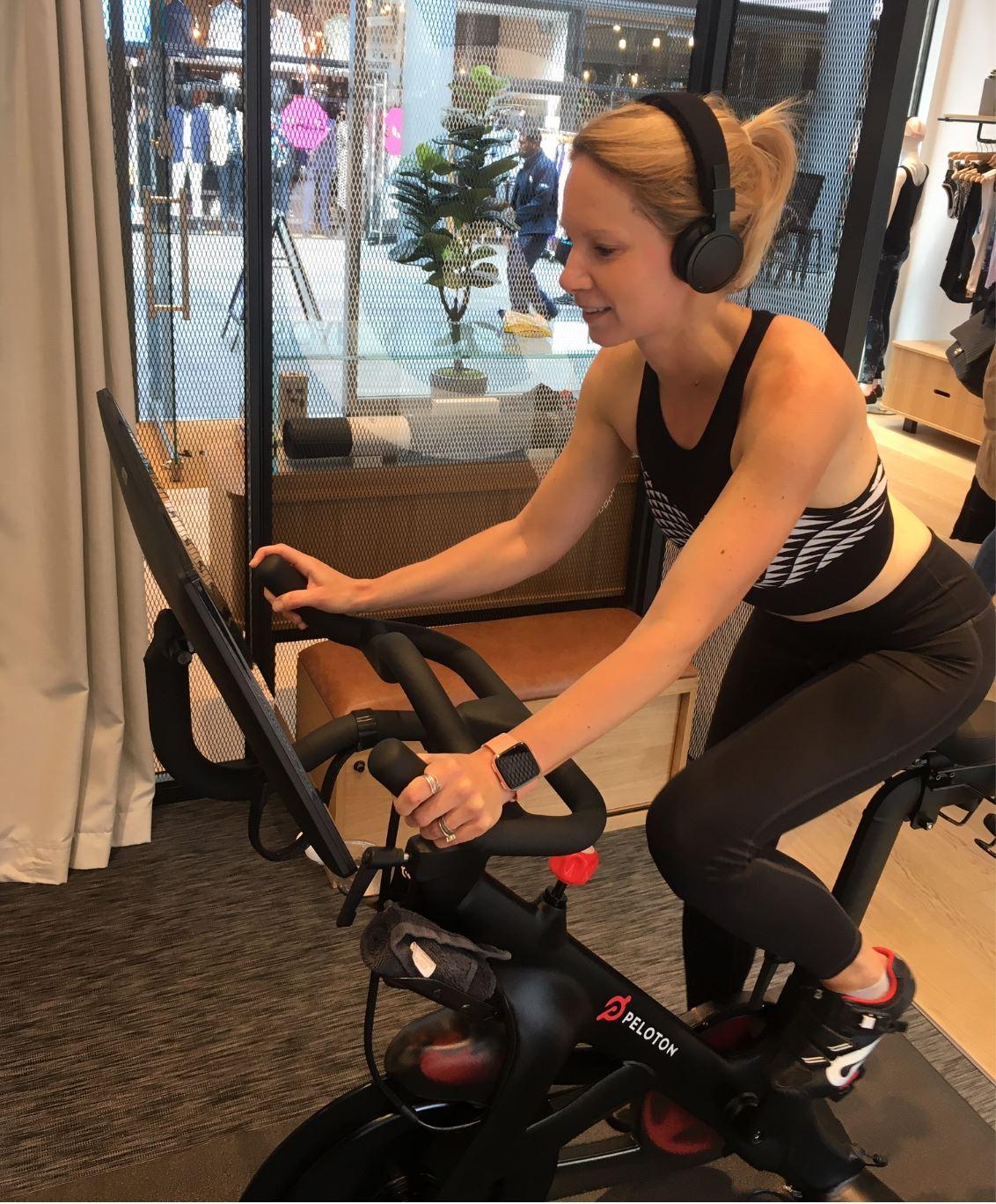 Trialing a live streamed class on the Peloton bike in Spitalfields Market.

Showrooms for the bike have popped up around London and you’re invited to book a trial so I decided I’d give it a try over lunch at their location in Spitalfields Market.

The bike is in the middle of the showroom and once you’re set up, the staff give you the option to have some curtains drawn so your solo workout isn’t on display for all to see. I left them open. I figured the visibility might encourage me to work harder.

As it turns out, I didn’t really need that much encouragement.

My concerns about it being dull were quickly eliminated as my instructor, Cody Rigsby, kicked off a 45-minute 90s-inspired class.

He was an incredibly engaging instructor and made me laugh out loud several times throughout the class. Each song was better than the last: Backstreet Boys, followed by TLC, then Marc Cohn’s Walking in Memphis! It was a 90s playlist of perfection.

All the while, Cody was doing real-time shout-outs to participants around the world.  In total, the on-screen stats showed close to 900 people in the class! The bike displays a variety of stats, and you can sort participant data by gender and age and see where you rank compared to other people like you. Given that I’m quite competitive, I liked this element.

All in all, I cycled more than 20km and burned more than 400 calories according to the stats. That was just as good, if not better, than my real-life cycling classes. 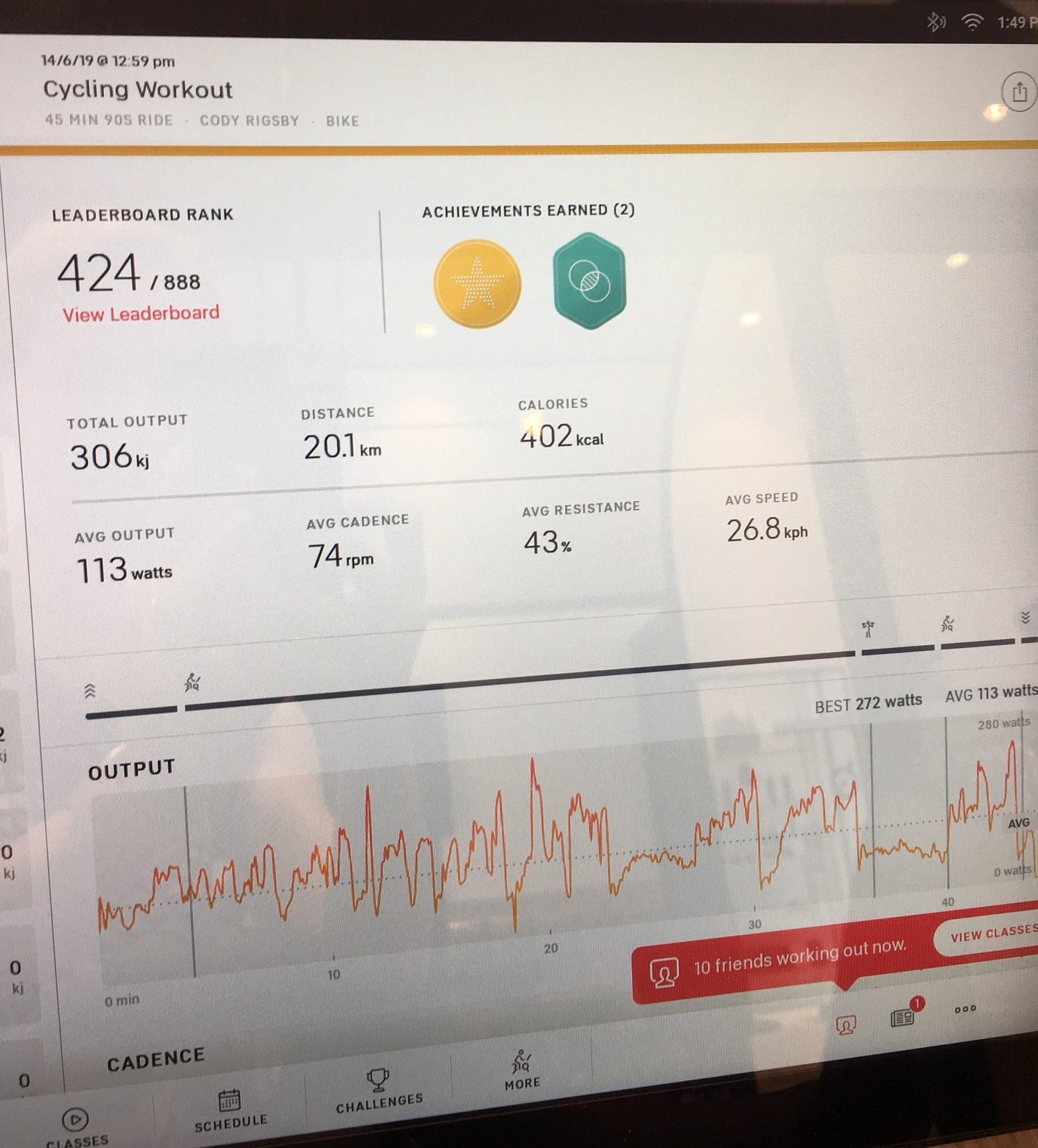 My only complaint was that the streaming quality in the Spitalfields studio was pretty bad. The class cut out numerous times throughout which was really disruptive, especially when I’m trying to sing along to the crescendo in Celine Dion’s “It’s All Coming Back to Me Now!” As an experienced indoor cyclist, I was able to fill in the blanks, but if I were new to this, it would have been a bit of a disaster. This is probably more a criticism of their Wi-Fi provider than the bike itself.  When it worked, it worked beautifully.

I’d love one of these bikes. Walking out of the showroom, I was already envisioning where I might put it in the flat. But I’m not an impulse buyer, so for now, it’s going to stay in the showroom. 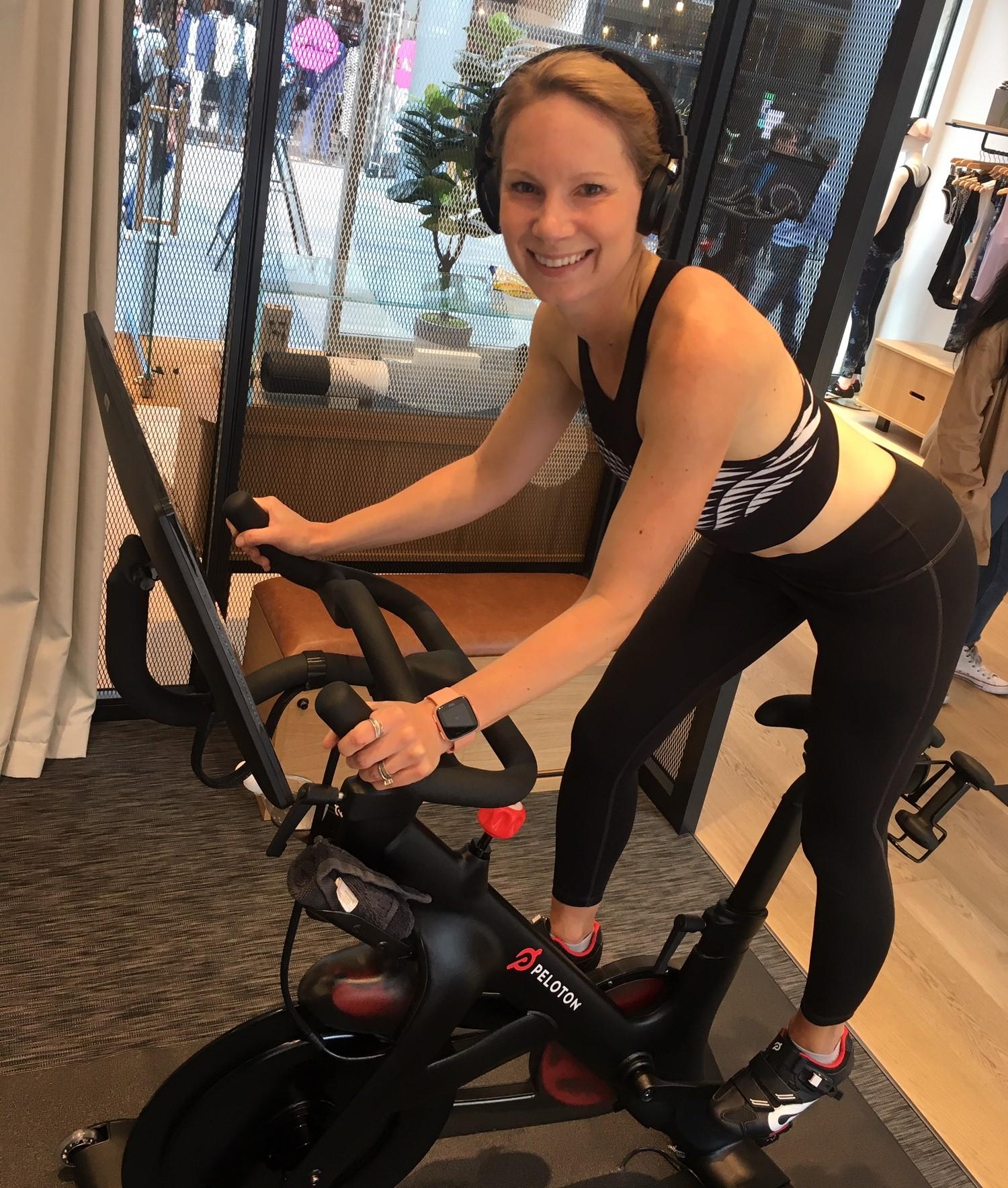 There’s something really fascinating about this concept and this company. And clearly, others agree.  Their recent funding round attracted $550M at a $4.15B valuation. They’ve built a cult-like following and a loyal subscriber base estimated at over 1 million. And they have first mover advantage as the pioneers of the content + connected fitness equipment category. By the way, they also make a Peloton treadmill with live streaming running workouts, but there’s nowhere in the UK to try it!

Peloton is a surprisingly immersive and exciting addition to the indoor cycling scene. I really wasn’t expecting to like it so much. People will scoff at the price tag and many have suggested it’s a fad, but I think they’re wrong. Dubbed the “Netflix of fitness,” I’d say they’re on to something.