Kev is a personal trainer who has run about 90 marathons, including 52 in 2011 to raise awareness of male suicide. He works closely to support Mind’s London and Brighton Marathon runners and he also once ran from Paris to London.

Running became his thing in 2003 when he lost his dad to depression. It had a huge impact on him and he started jogging a bit to lose some weight (Fresher’s fat at uni AKA the freshman 15 for you Canadians reading this!). He realised soon after that running was much more than just a way to lose weight – it started to shape who he was and became something he could really challenge himself with.

Aside from his running and PT work, Kev has also advised on a TV documentary, written for magazines and regularly speaks to businesses, schools and colleges about his experiences both in running and experiencing the suicide of a parent. Recently, he launched a virtual running club called Run Things so I asked if he would shed some light on the world of virtual running and tell us a bit more about why he runs….

What’s the deal with virtual running? How does it work?

I didn’t realise virtual running was a thing until we came up with our first idea. I had no idea that virtual runs had been happening for quite some time, so although we’ve become pretty big, we actually joined a movement that was already there.

Put simply, virtual running is taking part in an event that has no physical location. It’s organised remotely and often administered via social media or a website. People can take part in whatever location they like and often at a time that suits them. Virtual runs come in all sorts of categories but they usually have a quirk or target. It might be a simple as a virtual 5k – where you run 5k whenever you can, send in your evidence and claim your medal. Or it could be more complex and interactive like our Run Around the World in July, where you choose a team to join and then over the period of a single month, race to see who can get furthest around the equator in a month.

They’re a brilliant way to encourage participation from anyone and everyone – the lack of a physical location and time means they’re less restrictive. People who are nervous of crowds, just starting their running journey or simply not close to a parkrun or large running event can still feel part of a large group of runners who have a similar goal.

Usually, virtual run organisers will have a cause that they aim to support. All of our runs are in support of the mental health charity Mind, and everything our business, Run Things, does has the link between mental and physical health at its’ heart. Last year, we were able to donate a total of £20,000 to Mind. We’ve seen some amazing friendships form as a result of our events and groups of people who previously didn’t know each other are in Whatsapp groups, have had meet-ups and are in constant contact.

What’s been your greatest running accomplishment?

This is a tough one. There are a few and as clichéd as it sounds, it’s probably the very first time I ran for twenty minutes without stopping. That was in 2004 and I remember it really vividly – I felt like a runner rather than a guy plodding along trying to lose a bit of weight. Since then, I’ve done some amazing things. In 2011 I ran 52 marathons in a year – and as a real kicker, every one of them had to be done in under 4 hours! That was really tough!

In 2012 I ran all the way from Paris to London – the Arc Du Triomphe to Marble Arch. That was my first experience of really extreme distances. But then last year I did a 10k and came 15th in 38.41. The best thing about it was I was pushing my son in his buggy – it was our final race together as he got too big for it and it looked a bit weird pushing a 12 year old round in a buggy. Only kidding – he was 5, but still it was a good time to retire our old reliable steed. 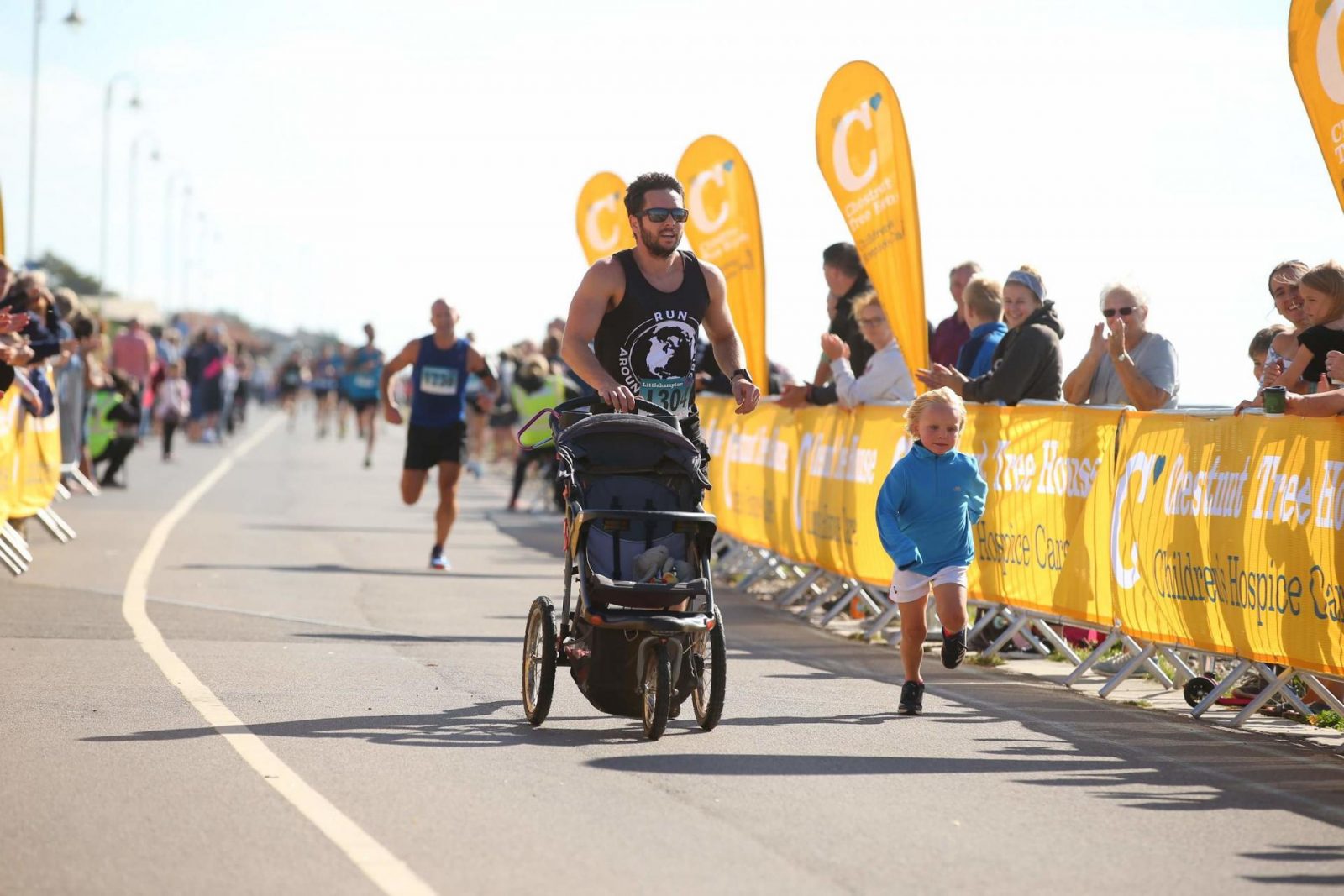 Everyone has their own reasons, but why do you run?

I actually recorded a podcast about exactly this. I started running in 2004 to lose a bit of weight. It was during the Athens Olympics and I was totally inspired and equally gutted watching Paula Radcliffe have to pull out of the marathon. The year before, during my Freshers’ Week at university, my dad killed himself. At the time I didn’t have a link between running and grieving but as I did more and more of it, I realised how much it was helping me to come to terms with things. When I ran, I could think or not think, cry, sob, be angry, be serene – be anything I wanted. I had grieved for my dad but I was a typical rugby playing bloke – I wasn’t one to get emotional about things and stored things away in the back of my mind. When running, I filtered through all those thoughts and memories and rationalised a lot of my life. It became therapy! What I realised was that I was in control when running; I could run really hard – like REALLY hard so that I wanted to throw up, or I could plod along and just enjoy the scenery – I loved the variety that it offered.

16 years on I still run, but those reasons are mostly behind me. I use my dad’s memory for motivation and I can bring things back to motivate me when I’m deep in pain during a race – that idea that he chose to give in and that I never will is something that I think makes me mentally stronger than the other runners around me. But I’m also more relaxed now. I run because I can, not because I have to. I have a son and he’s made me realise that it’s ok to not be absolutely committed to just one thing and that running isn’t the be-all and end-all of life. I ran with him for 5 years in his buggy and we bonded a lot. He’s got a decent parkrun PB from his buggy and a truck load of happy memories from things we’ve done, talked about and seen during our many runs together. So, it’s been educational for him, too. When I told him that the 10k race we did would be our last because we needed to stop, he cried. Which made me cry. Because it was and is such a huge part of our identity. 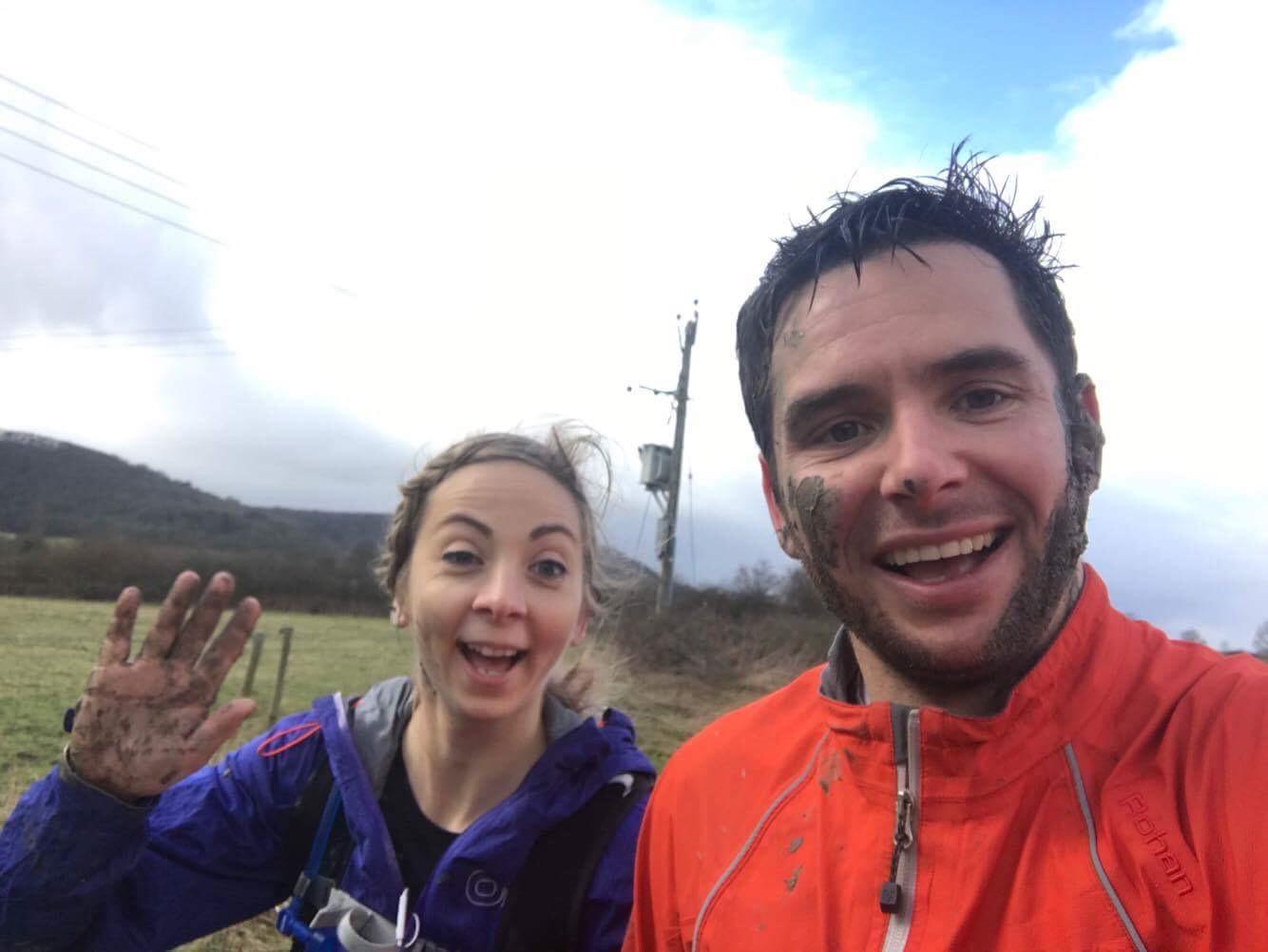 When you’re at your lowest point in a race, what do you say or do to motivate yourself to keep going?

The thing about racing rather than running – the bit where you try your hardest, go for a PB, race the people around you – is that you are going to come face to face with the desire to give in. Whether you’re flying along as fast as you can in the final part of a 5k or at mile 23 of a marathon, the same thoughts come over you – ‘I can’t do it. I can’t keep going’. In my opinion, if you don’t have those thoughts, you could be going faster/harder!

The key thing when you’re absolutely buried inside yourself physically and mentally is to have something there – your secret weapon – to inspire you to keep going. I’m a huge fan of mindset and mental rehearsal. I say to my marathon clients that they need to sit down and look at a course map of whatever event they’re doing. At key points or landmarks, they should spend some time thinking about how they might feel – both positive and negative. If it’s negative, how will they get over it? What will they say to themselves? What will they think of? What will they listen to? I always explore my motivation for an event – whether it’s a PB or trying to get in the top xxx positions, I have to remind myself of the commitment up to that point.

I carry a little note to myself and put it in my race belt. If things are *really* tough, I’ll take it out. It tells me to think of Jesse (my son), to remind myself of making my dad proud and to remember that above all, I’ve put in so much work. This torture is temporary – the sooner I get to the finish, the sooner it’ll end.

What new habit have you adopted in the last three years that’s most improved your running?

This is a great question and it depends how we define ‘most improved your running’.

I broke my marathon PB in September at Berlin. I was gunning for a sub 3 and came over the line a minute and something over that. It was still a PB but I didn’t care – it wasn’t what I wanted. But I got quicker because I changed my routine. I trained throughout the summer rather than the winter. And I focussed on adding more marathon paced runs into my schedule. I’ve got a 1.21 half marathon PB so I should be able to hit sub-3 but I’ve always been hampered by cramp. Adding in longer, slower runs and more marathon paced runs improved my muscular endurance a lot.

The biggest change in the last few years, though, has been to take a more relaxed approach to training. I don’t beat myself up if I miss a run and I’m much more willing to adapt my training plan as it progresses – it makes things so much more flexible.