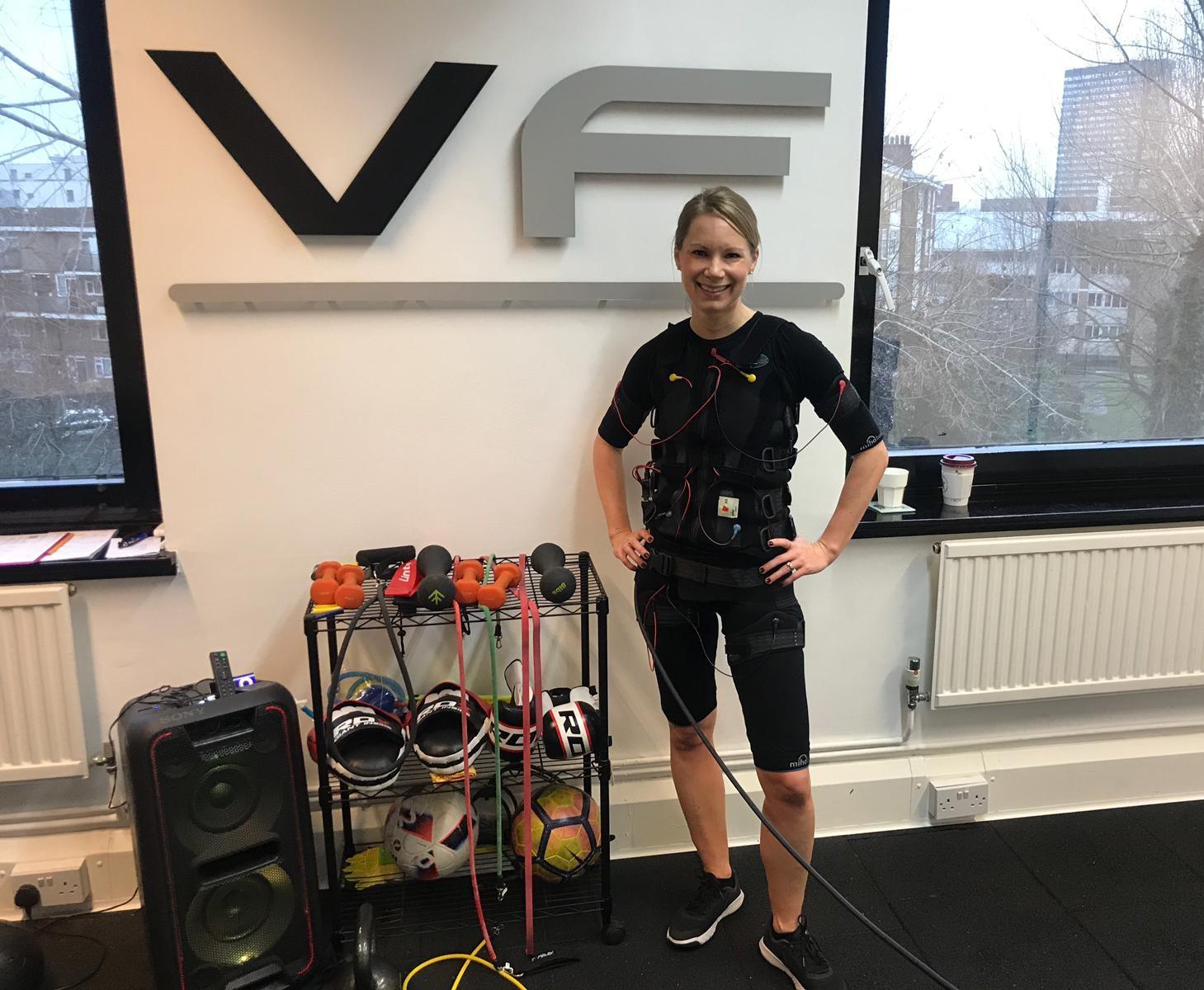 Recently, I teamed up with VitalFit EMS Fitness Lab in Canary Wharf to try an experiment: Can EMS Training make me a better runner?

What is EMS Training you ask?

EMS stands for Electrical Muscle Stimulation training. Basically, you wear a suit covered in electrodes and the machine sends electrical impulses into all your major muscle groups while you work out.

I assure you, it is way less scary than it sounds.

The actual workout varies from trainer to trainer, but it usually involves a combination of basic bodyweight exercises. Some trainers also incorporate equipment like small hand weights, bosu balls and resistance bands. The best part? The sessions are just 20 minutes. I know what you’re thinking: “Pfffft. As if that would even do anything.” Trust me. It does. You WILL feel it. That short workout is equivalent to more than an hour weight workout in the gym and despite the relative ease of the actual movements in the session, it will kick your ass. 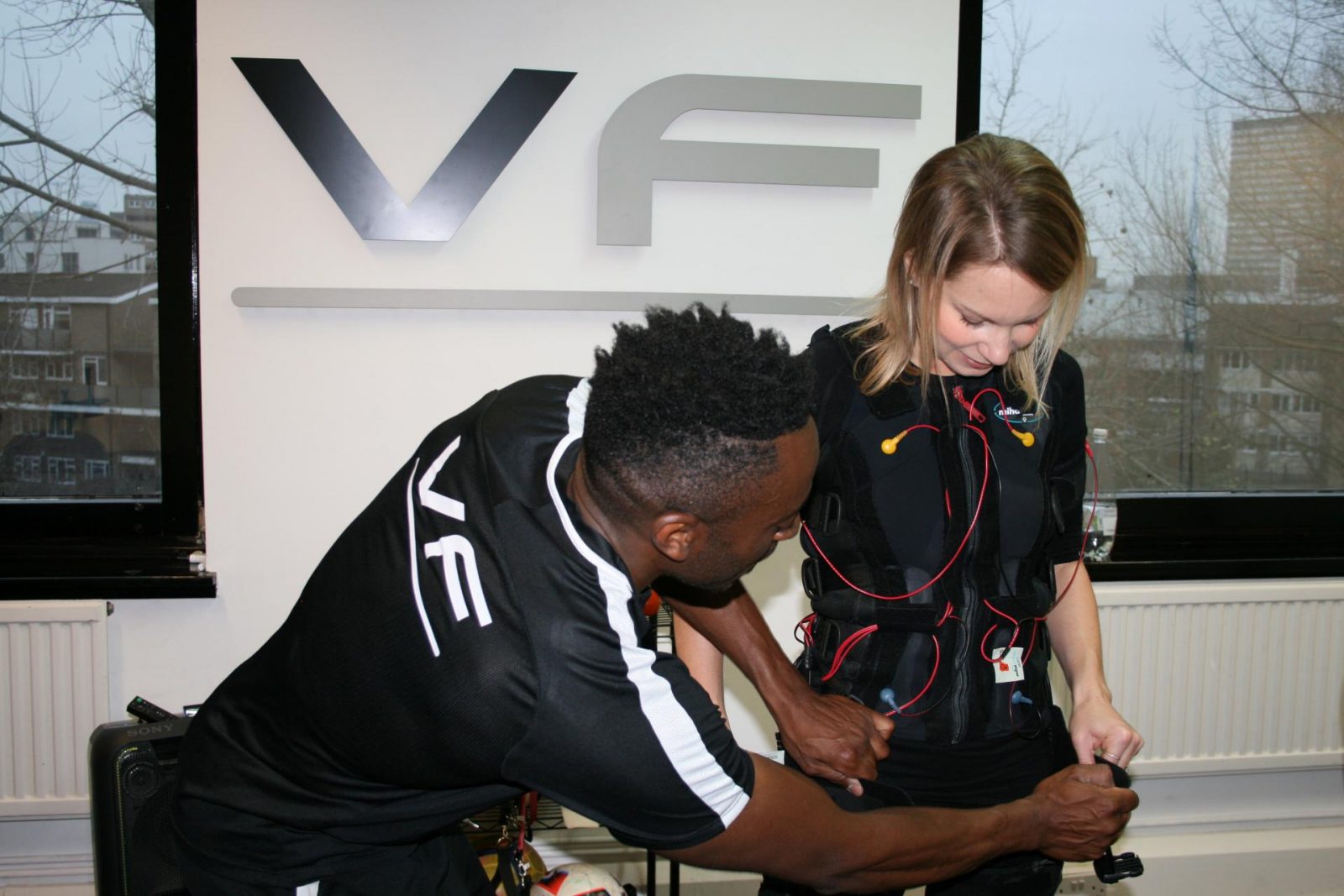 Getting suited up in the miha bodytec kit with trainer Carlos

The science behind it is that it allows you to hyper-target muscles and it can help with everything from rehab to elite sports performance. Its roots are in physiotherapy, but it is well-known to be used by celebrities, supermodels and elite athletes to give them an edge and save them time. In fact, Usain Bolt is well documented as having used EMS Training. If it’s good enough for him, it’s got to work for me, right? 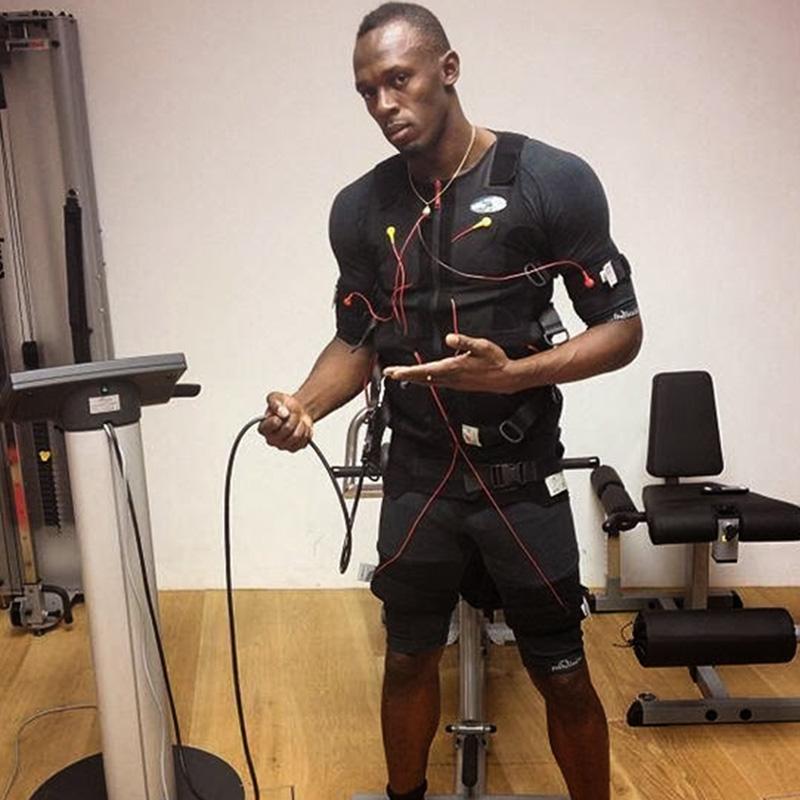 Usain Bolt is known to use EMS Training.

Why do I know about EMS Training?

This is one of these fun moments in my life where my work, personal interests and blog collide. As you may already be aware, I work for a PR agency that specializes in health and fitness. One of my clients is miha bodytec, the German manufacturers of EMS technology. VitalFit is one of the EMS Training providers in London that uses their technology.  I met the VitalFit team at an event we helped coordinate before Christmas and started telling them about my running goals. That’s when we hatched a plan for this challenge: Can EMS training improve my running performance? I agreed to take part in a series of sessions and in return, document my experience on my blog. 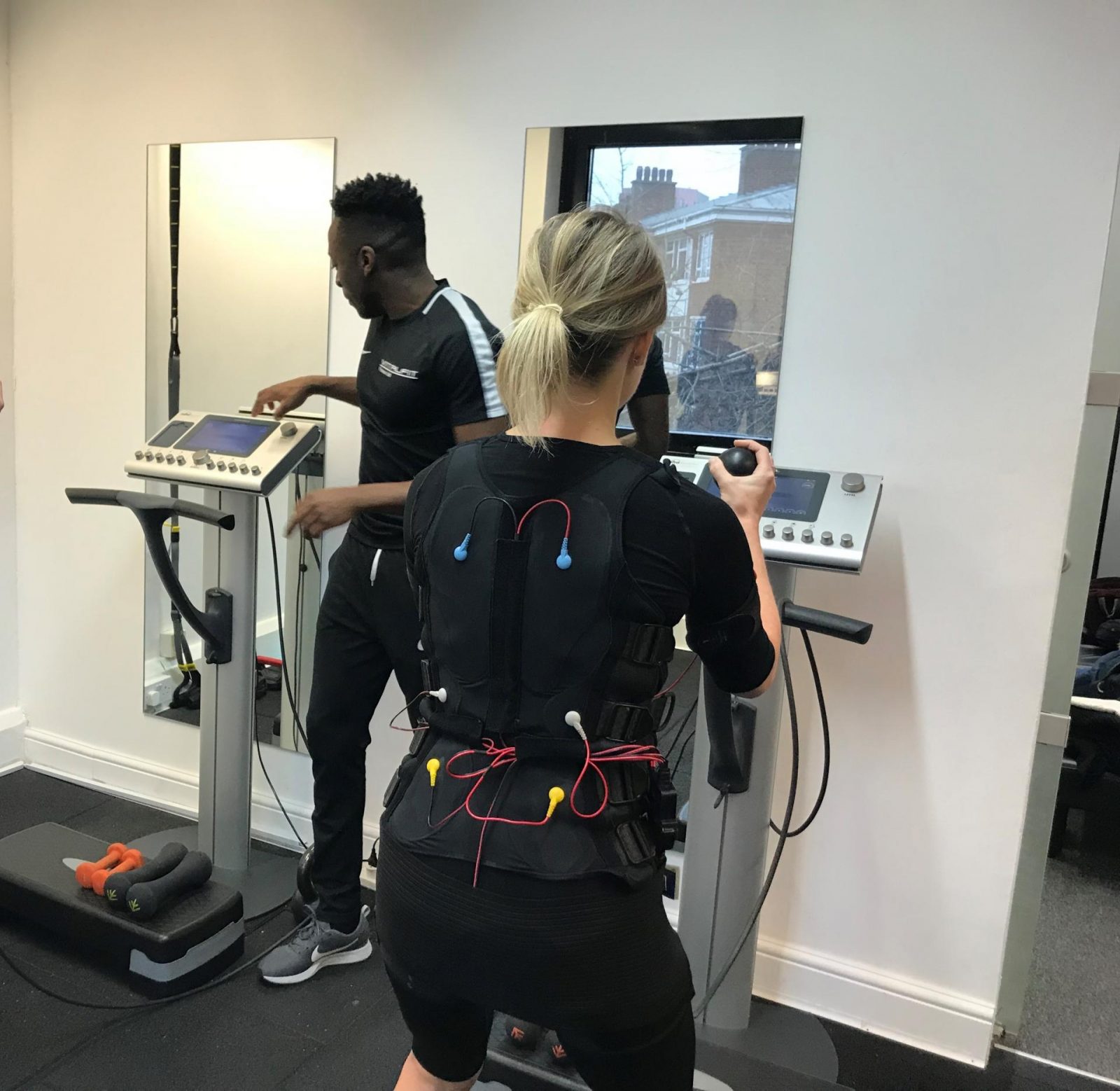 I’ll admit, I was nervous ahead of my first session. My first EMS session took place last year with a different trainer at the miha bodytec headquarters in London. Ahead of the session, he asked about my general fitness and I smugly bragged about all my running, gym sessions and cycling workouts. As a result, he cranked up the intensity of that first session, clearly assuming I was as tough as I claimed.

Oh man, did I pay for it. The DOMS. Oooh the DOMS. The delayed onset muscle soreness I had after that first session was unlike anything I have ever felt. It was worse than after running a marathon. I sincerely felt crippled. Stairs became insurmountable objects of fear and sitting on a hard surface was unbearable.

The weekend after this first session, my parents were visiting me in London, and we went to the Tate Modern for an afternoon wander. The elevator was broken so they enthusiastically headed for the stairs. I flat out refused to go up. I couldn’t. It was just not possible.

I don’t tell you this to scare you. Let this be a cautionary tale. Don’t be a hero. If you do dabble in EMS Training, start with a low intensity and work your way up.

I also tell you this to illustrate the impact of this seemingly benign form of exercise. If you’re like me, you might be looking at my videos and pictures of this training and think it couldn’t possibly be that difficult. How could that do anything? Trust me. It does. My subsequent sessions have been far more sensible and while I still had some noticeable DOMS, it was akin to the type of muscle soreness you might experience after a hard workout or long run.

The results so far

I don’t want to jinx anything, but my running performance over a short distance has definitely improved. I just ran my first ever sub-24-minute 5K. I also feel a bit stronger and generally more powerful. I’m lifting heavier weights at Orangetheory for example and have more speed and endurance on the treadmill. I think it’s too soon to tell whether the EMS Training is purely responsible, but I’ll keep tracking my journey with VitalFit and keep you posted. 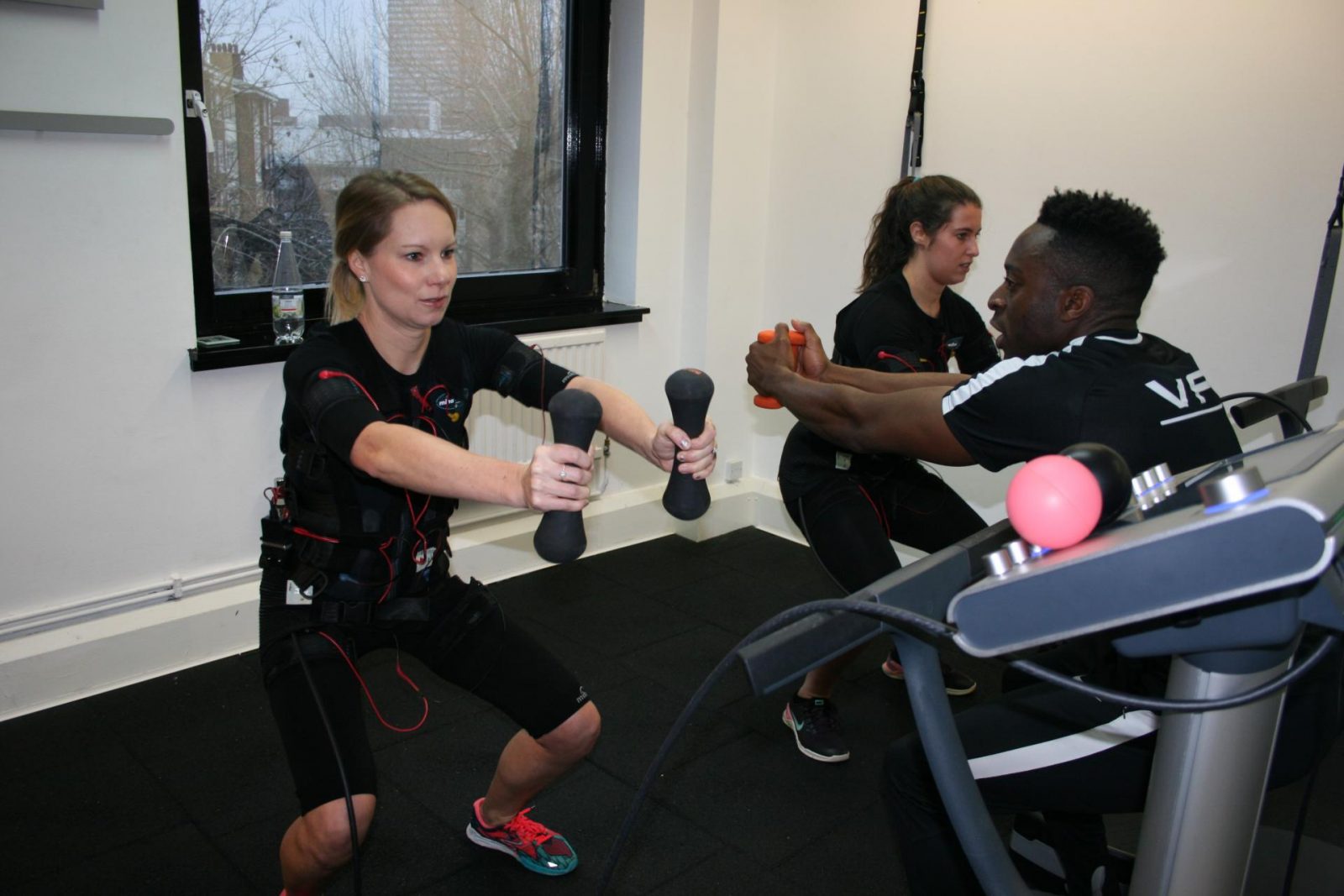 Through my job, I’ve also had the opportunity to meet many people who have been training with EMS and their results are incredibly inspiring. In combination with diet changes, many have lost immense amounts of weight, or toned up considerably – from just 20-minute sessions, once per week! Many people also report quicker injury recovery or complete elimination of back pain. 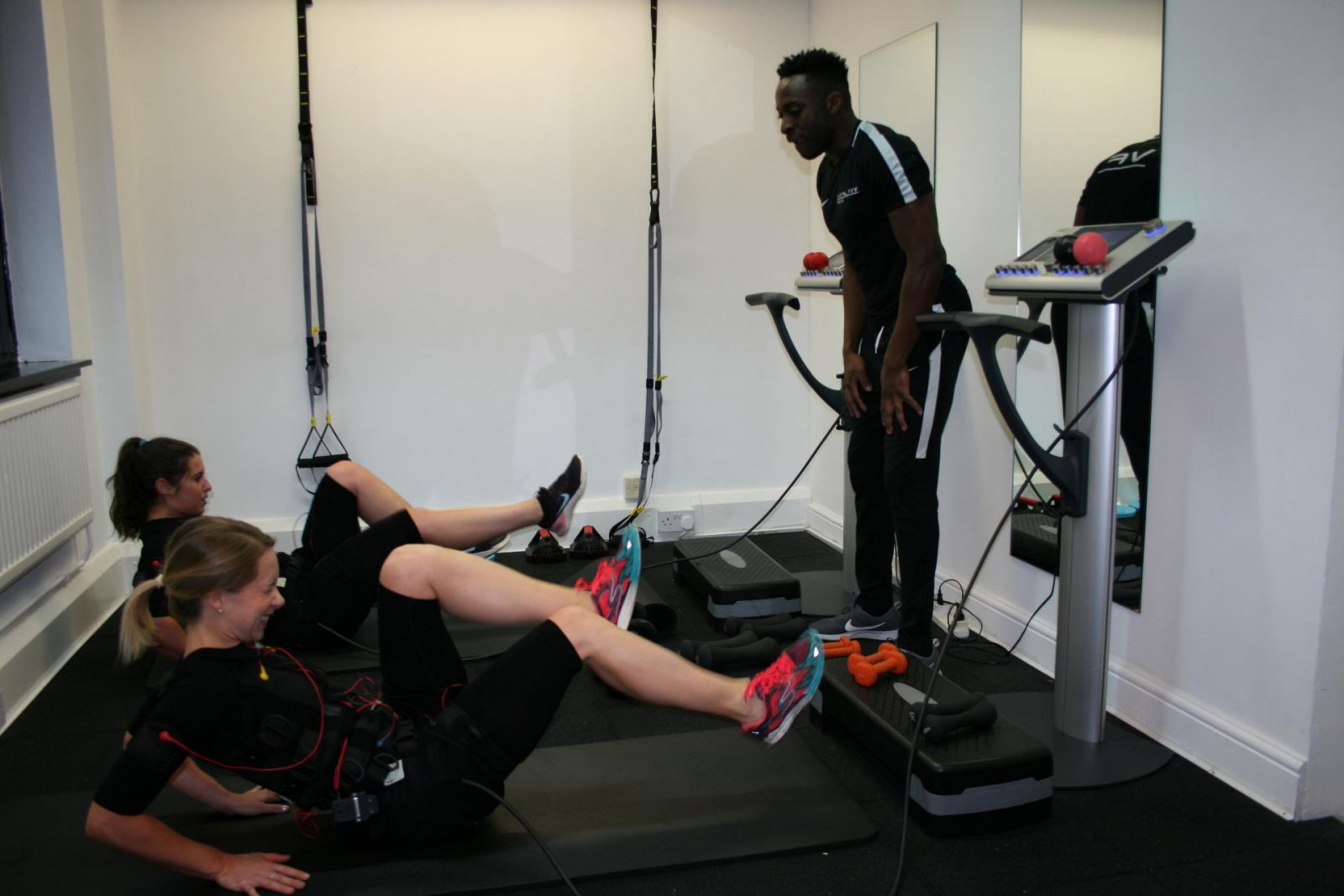 I’m sure you’re thinking this sounds too good to be true. And I would agree with you. I approached EMS training with the same skepticism. Is this just some get-fit-quick gimmick, I asked myself? The more I learn and the more I experiment with it, the more I am convinced that it’s a powerful form of training – either as a form of exercise for those who don’t like going to the gym, or for fitness enthusiasts or athletes looking to add something extra to their training.

I’ll post another update in a few weeks and let you know how it’s all going. In the meantime, I would be happy to answer questions in the comments if you have any.

If you want to try a session yourself, get in touch Carlos or Sandra, the amazing team at VitalFit EMS Fitness Lab. If Canary Wharf isn’t convenient for you, you can find an EMS Trainer close to you here.

EMS Training was a massive success. After just six weeks of training, I posted my best 5k and 10k times of my whole life. I literally changed nothing else about my diet or training routine. I just added a weekly 20-minute EMS session to my routine.

In February, I ran multiple PBs in the 5k distance, ultimately running my fastest time ever of 23:34. Prior to EMS, I had never run faster than a sub-25 minute 5k.

Lifted by my 5km success, I decided to try to take it to the next level and try to beat my long-standing 10km PB. My best time of 49:59 was set seven years ago in Toronto at a mostly downhill race. I spent the last seven years chasing that goal and was reasonably sure it was not within my grasp. I came close a few times (50:03 in December 2018 for example), but there was a time where I thought my best 10k races were behind me.

And then, magic happened.

After a few weeks of EMS Training, I ran my fastest 10km ever in the Hyde Park 10km. Smashing my previous record, I finished the race in 48:49. I was beyond thrilled. This was hands down, my running victory of 2019. A few weeks later, I went on to beat this time again, running 10km in 48:16.