This post originally appeared on my company’s blog, but I wanted to share it here too. Excuse the rant. I do try to use my blog as a place to spread good vibes, not bad ones, but this is worth ranting about. 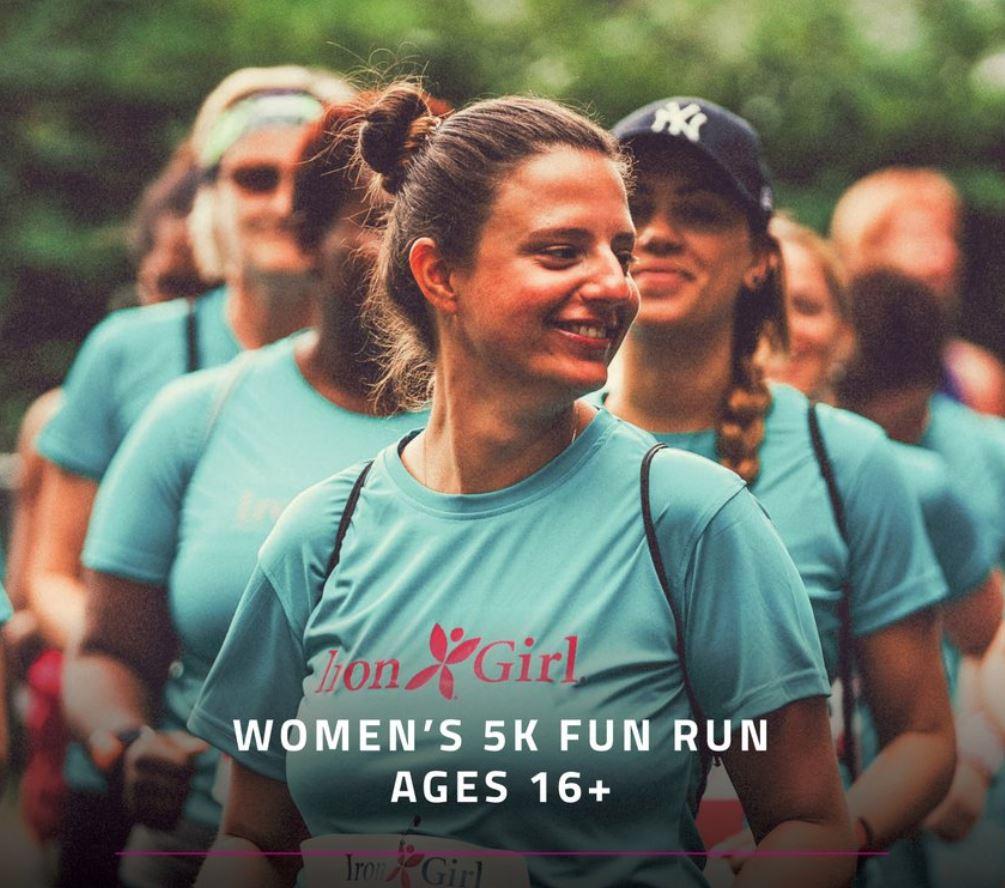 Recently, a campaign from Ironman UK caught my eye on Twitter and it really annoyed me. I don’t normally use my social platforms to complain, but this time I had to say something. In case you missed it, they launched Iron Girl 5K, a 5k fun run for girls aged 16+ to take place alongside the Ironman event. 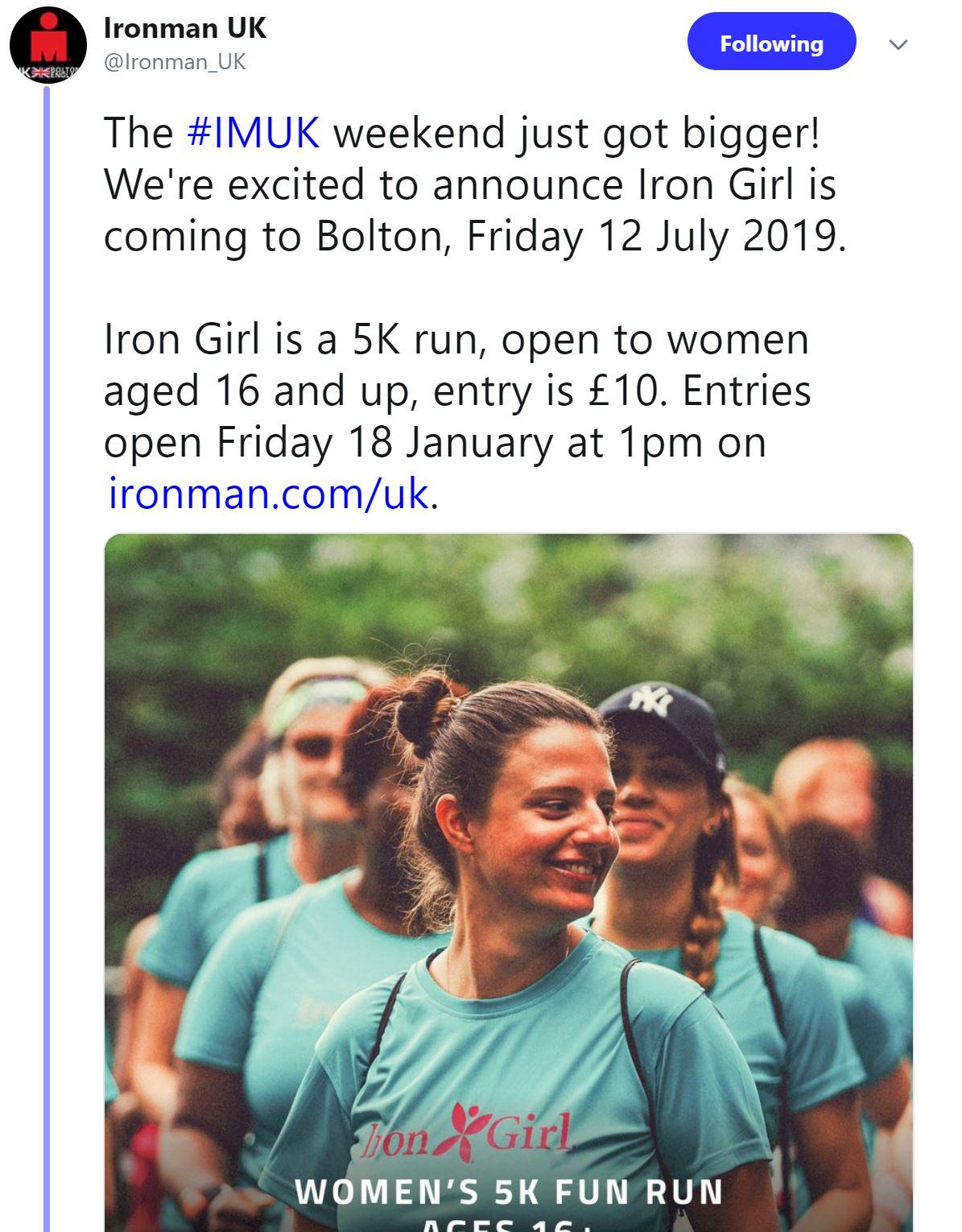 Really!? I try not to get offended by sexist, dated marketing. I work in the industry and I’ve seen (and shot down) many a bad idea in my time, but this one rattled me. 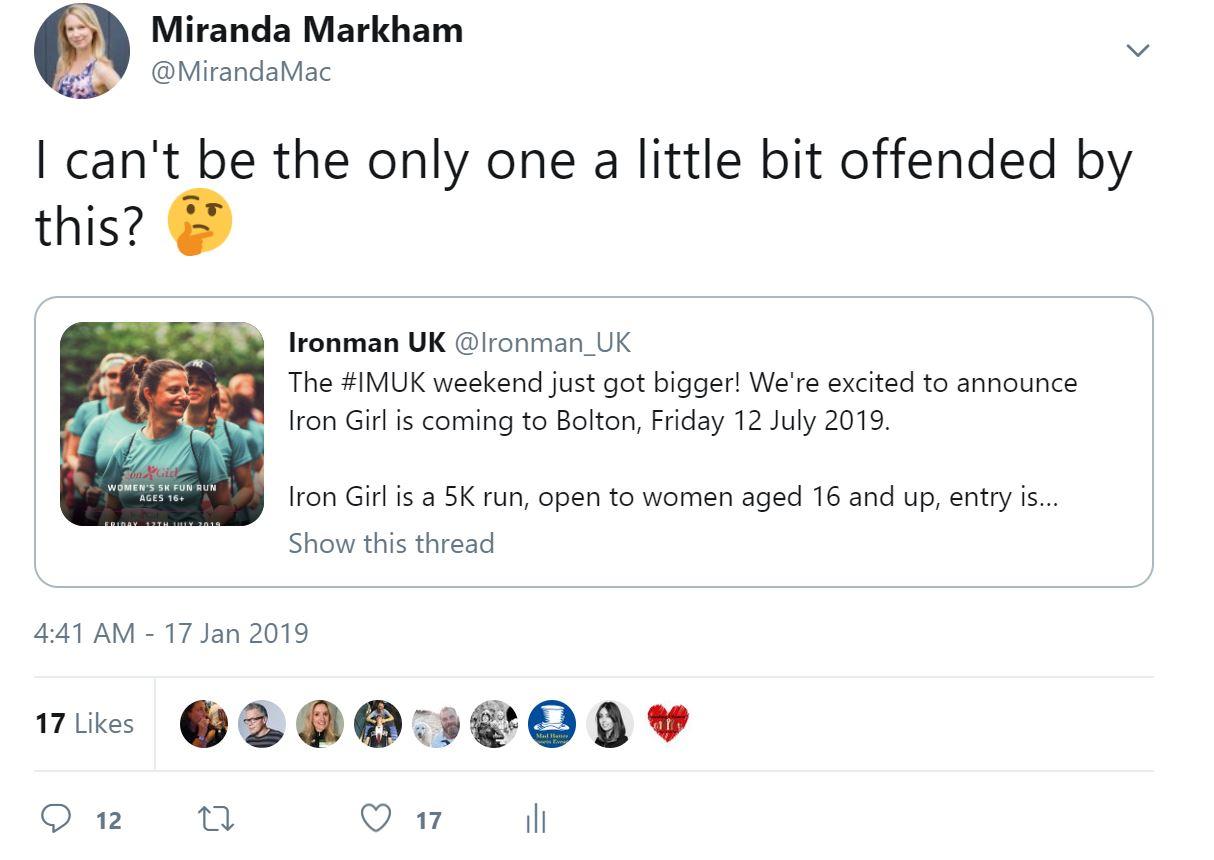 My actual in-person rant was a lot more colourful. Ask my colleagues.

I quickly realised I wasn’t alone in my feelings about this initiative. Many people, men and women, replied to the tweet expressing their disappointment over the out-of-touch, tone-deaf and, frankly, patronising message. Surely, young women couldn’t possibly accomplish anything more demanding than a 5k fun run. Let’s leave the real racing to the men, shall we?

Before I continue with the story, I should point out that very quickly, Ironman UK listened and updated their campaign. In less than 24 hours, they tweeted to apologise and acknowledge that they “missed the mark” with the original race. It has now been replaced by a 5k Night Run, open to anyone. 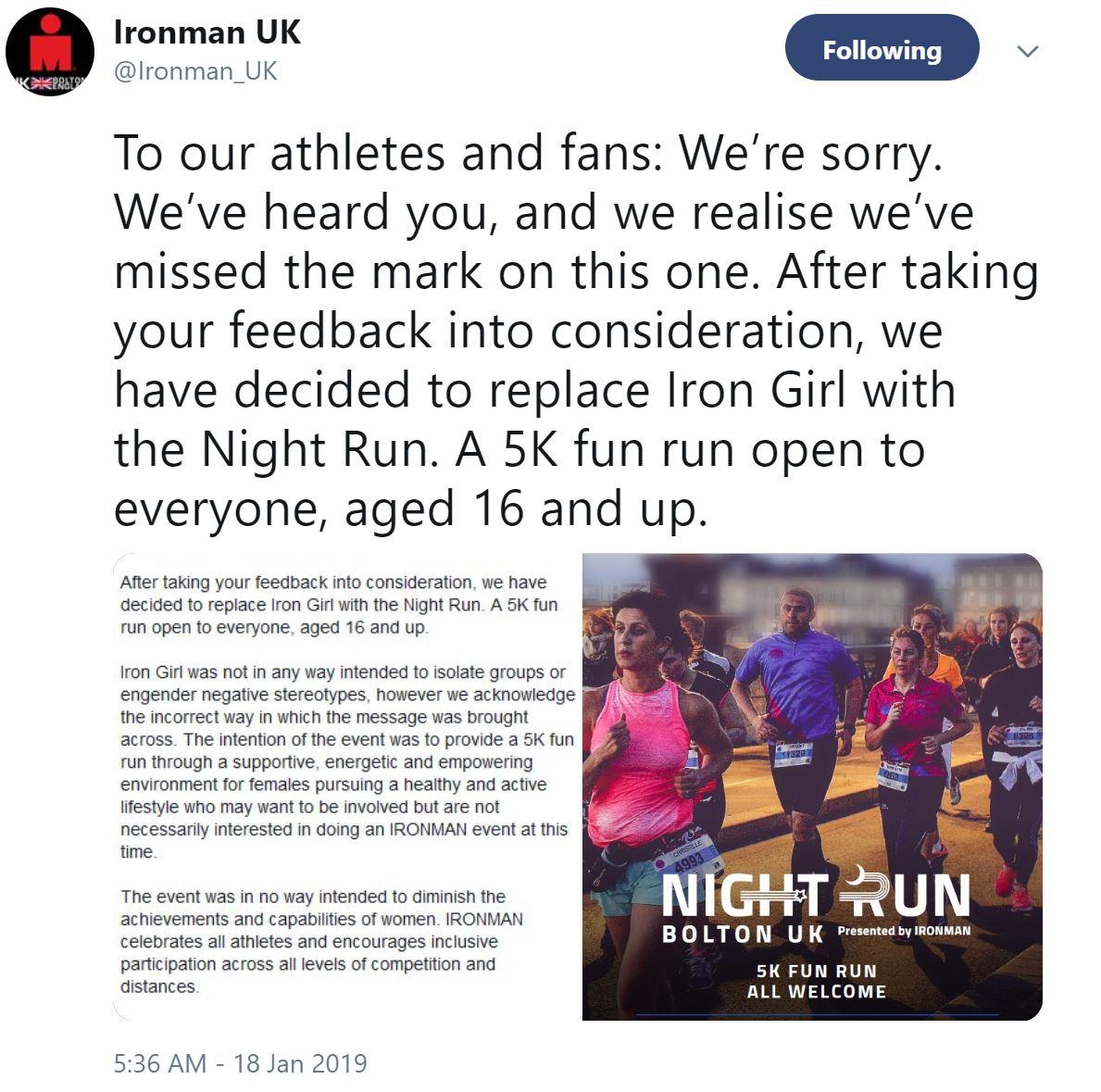 My grumpy tweet about the event generated the most engagement I’ve had on Twitter for a long time! It clearly struck a chord with many runners and athletes. However, as with anything that gets a bit of attention online, opinions can be polarising. One women responded to me suggesting I was being overly sensitive and that I should applaud any effort to get more people active.

Of course, I support getting more people active. Any initiative that encourages people to get involved in sport or athletics is wonderful. But people is the operative word in that sentence. Why wasn’t the 5K for men and women? Why did it have to have a pretty pink butterfly on the logo? Why does it seem to imply that women couldn’t possibly ever aspire to an Ironman distance? And why wouldn’t Ironman, the brand behind the most intense endurance event on the planet, know their audience better?

We sat around the office musing about how this could possibly have been approved. Not a single person in the organisation sat down and thought, ‘hmm…. this might not go down well’. I’m all for getting more women involved in sport, but we have to be better than this. I notice the same trend in men’s vs. women’s fitness magazines. We continue to encourage men to be the best, most badass versions of themselves and yet, for women, we simply pat them on the head for trying. Men get articles on how to smash PBs, lift more weight and run further and faster. And women? They get articles on why it’s OK to come in last or how to make sure their hair looks good after a workout. I know this might resonate with some women, but there has to be a better balance.

The Iron Girl event was well intentioned, but poorly executed.

And all on the same day that mother-of-one Jasmin Paris won the 268-mile Montane Spine Race – beating men and women – in a record 83 hours, 12 minute and 23 seconds (knocking more than 12 hours off the previous record). Hmmm.

I’m glad Ironman listened and did the right thing in the end.