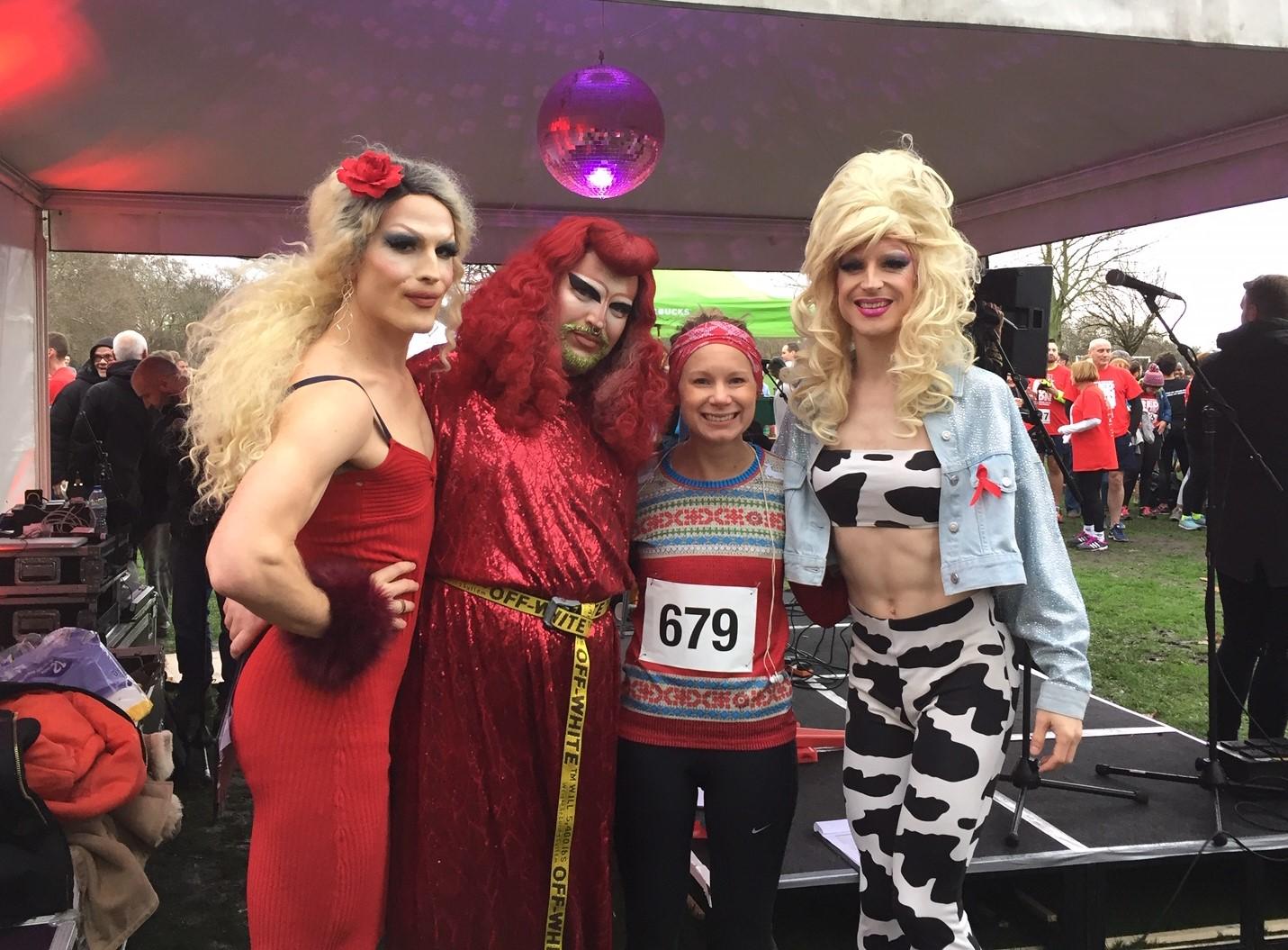 Just like last year, the World AIDS Day Red Run was my final race of the year. However, this year’s race was a little different. I’ve been working with one of the organisers for the last six months on race day logistics. I also helped with registration on the day.

For that reason, I didn’t spend a lot of time thinking about the actual run itself. I hadn’t trained in any special way and I kind of forgot about my own goals. My goal became making this year’s Red Run a perfect event.

The World AIDS Day Red Run took place in Victoria Park. It was expecting 1,200 runners, making it the biggest World AIDS Day event in the UK. It was also the 30th anniversary of World AIDS Day so it was an extra special event, and we even had the Mayor of London, Sadiq Khan, join as a special guest to cut the ribbon before the run started!

For anyone that was at last year’s event, you may remember that there were some long line-ups at bag check which caused the start of the race to be delayed. There were many contributing factors to this, but all of them were very fixable. That’s how I got involved in this event in the first place. Ian, the Fundraising Manager from Positive East and the organiser of the Red Run, reached out to me after seeing my blog post about last year’s event. I offered to help in 2018. I don’t know much about hosting charity events, but I do know a lot about races, so I offered to lend whatever insight I could provide to help make the running part of the day as smooth as possible.

The weather forecast looked pretty bleak, so we spent a lot of time contingency planning for bad weather conditions. I arrived at the event more than two hours early to help with registration. It was windy and rainy, but everyone was in good spirits despite the weather. I closely monitored any long lines forming. This was one of the major things we wanted to avoid this year and thankfully, everything was moving swiftly thanks to the large number of wonderful volunteers that were there. Free coffee from Starbucks also helped keep everyone warm and caffeinated. 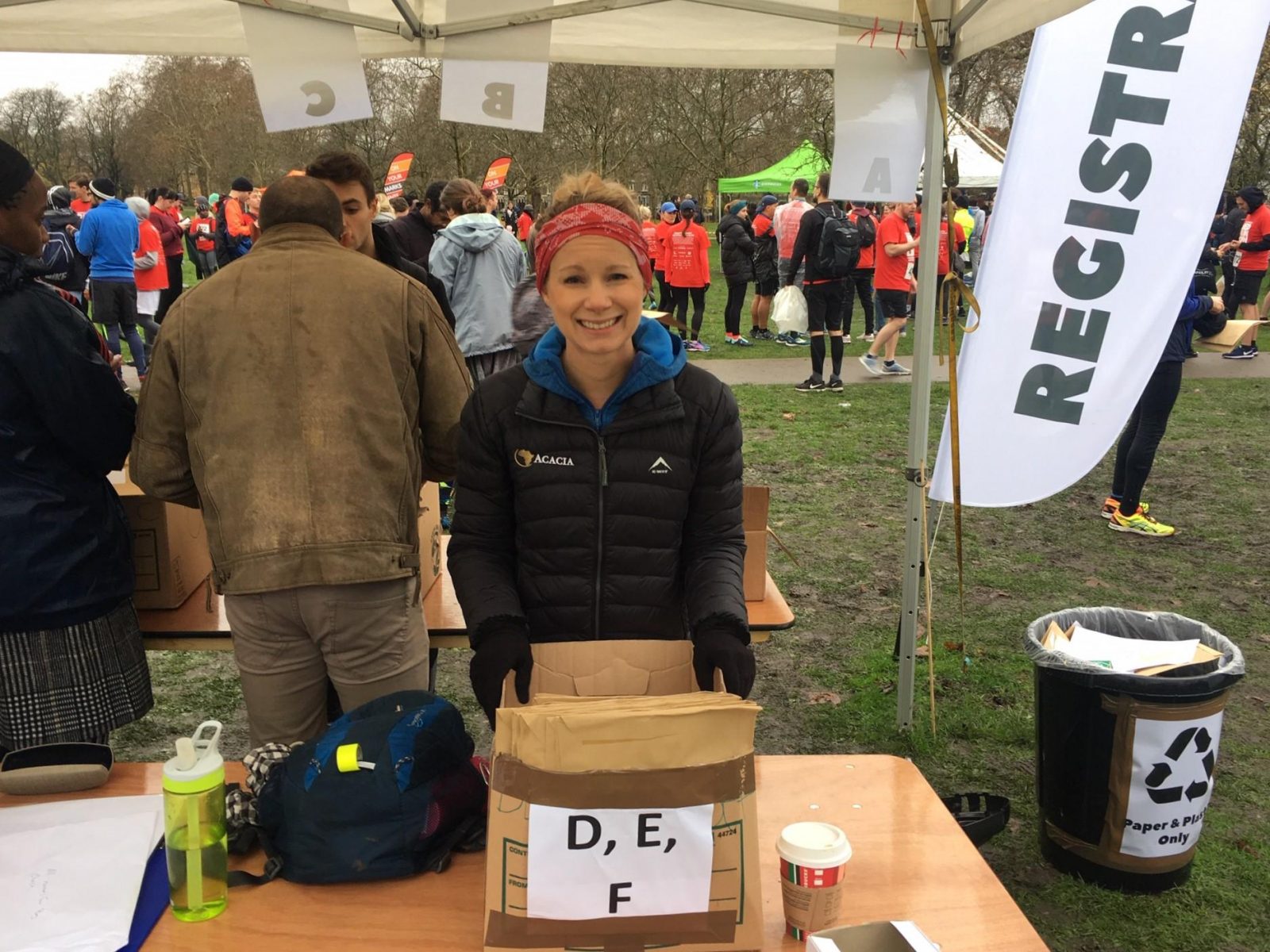 Trying not to freeze to death at registration

I was so involved in ensuring all runners had their bibs and bags checked, I nearly forgot about my own pre-race prep! 15 minutes before go-time, I quickly changed from rubber boots to trainers and took my place in front of the stage. 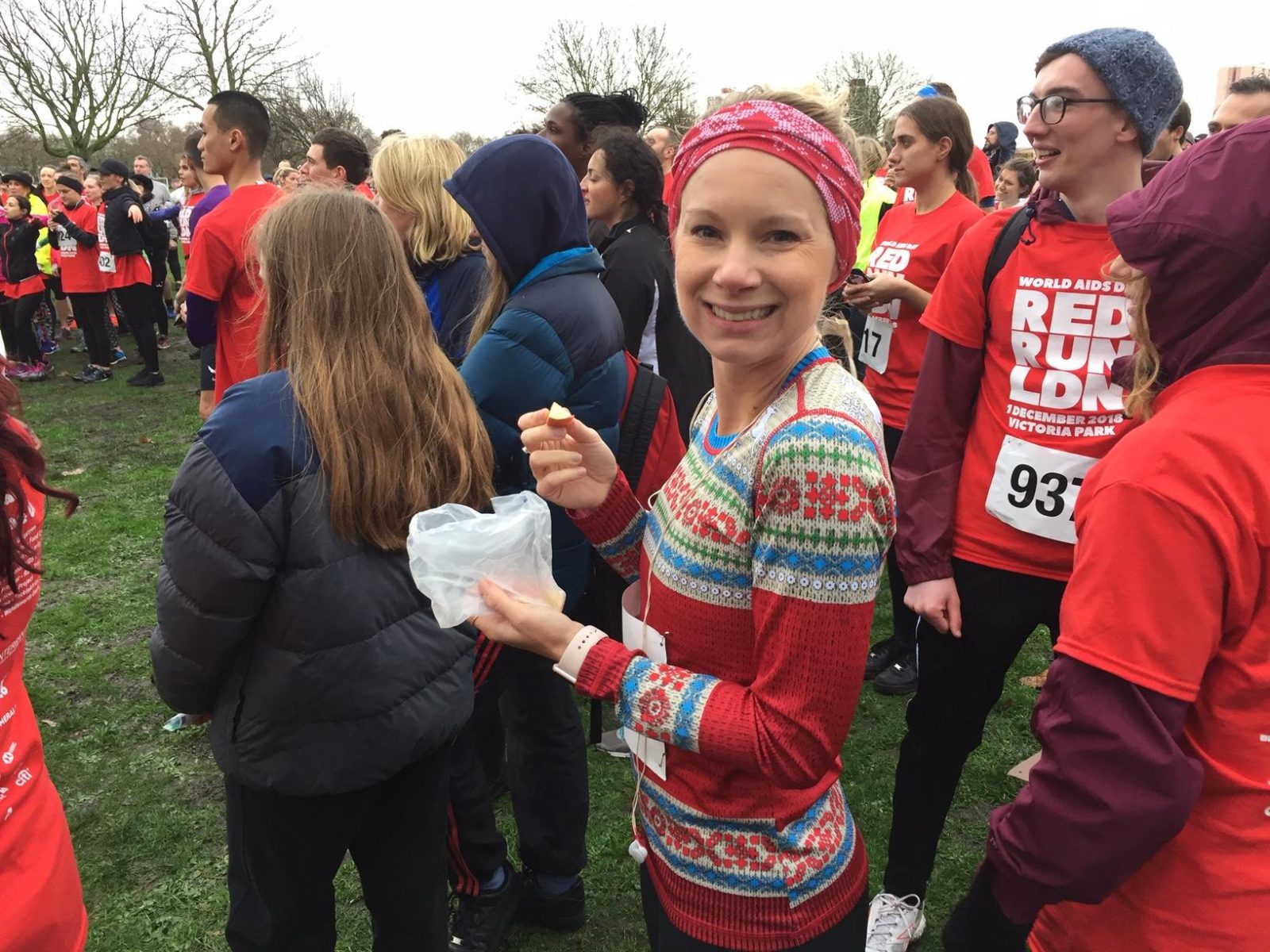 Fueling up on some pre-race apple slices…

Thankfully, the rain abated during the warm-up which was perfect. DENIM, a drag girl band, had everyone laughing and moving in front of the stage before Sadiq came to say a few words. He cracked a couple quick jokes and thanked everyone for being part of an event that raised more than £100,000 for 40 essential HIV charities across the UK. 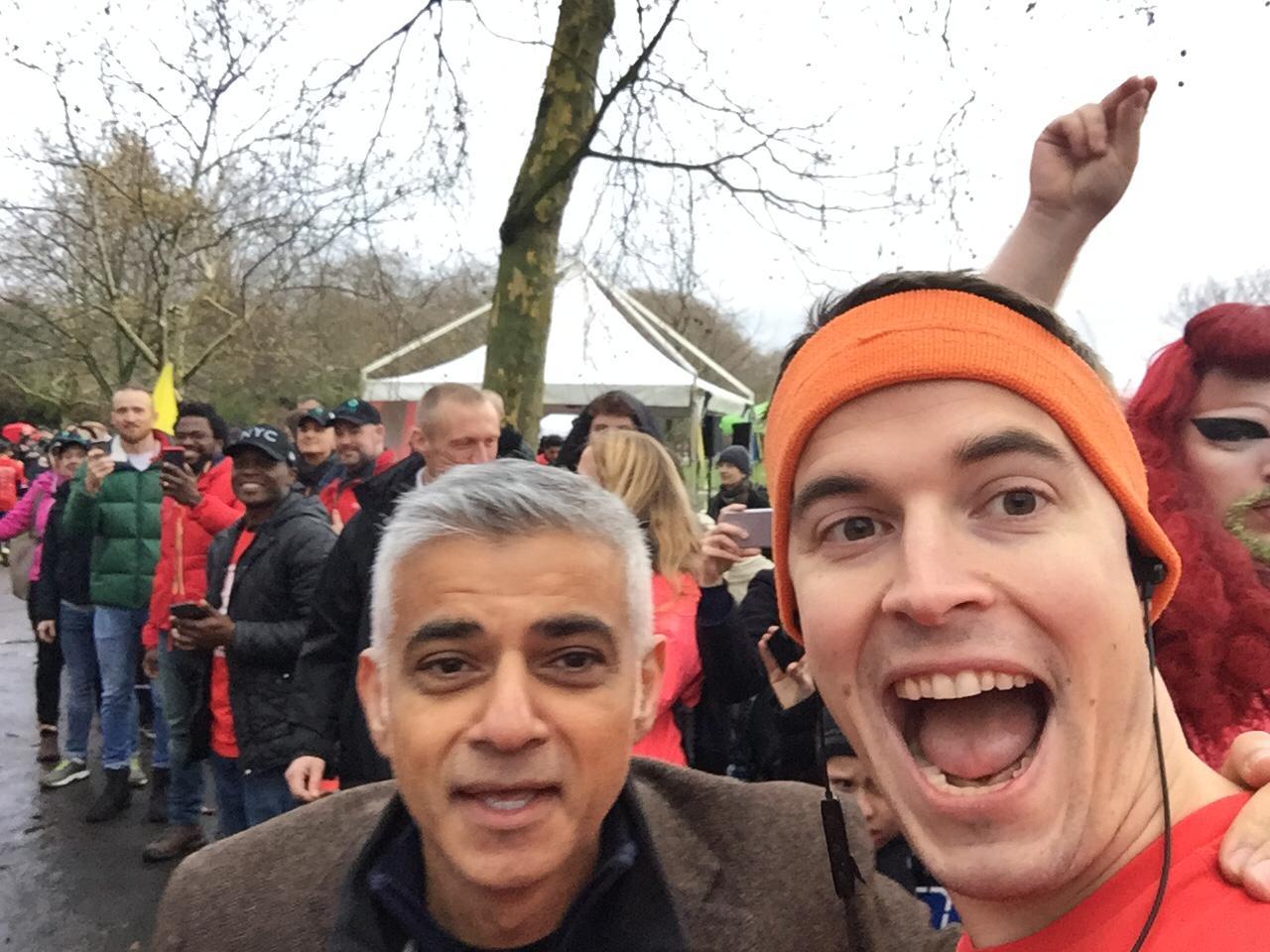 Everyone then made their way to the start line and off we went. I glanced at my watch. It was 12:38. The race was meant to start shortly after 12:30. We’d done it! Avoiding major delays was one of the key objectives for the day and I was so happy that it all worked out!

I kept scanning the crowd to see if I could see Ian to give him a huge smile and a thumbs up but I couldn’t see him.

It was time to focus on running.

My hands and feet were numb and I was so far from warmed-up it was almost comical. I decided not to be too aggressive in the first 1km and just ran with the flow of the group.

I eventually picked up the pace and remember thinking that the guys around me looked like they were running pretty fast. Then I realised I must also be running that fast if I was keeping pace with them.

The Red Run course is four 2.5km laps. The first two laps flew by. I only had a timer on my watch – no average pace. My 5km time was just over 25 minutes. I suddenly realised that if I pushed a little harder, I might be able to sneak in under 50 minutes – my original goal for this race.

On the fourth lap, I had a renewed burst of motivation because I really thought I was going to sneak in under 50 minutes.

As I was coming down the final stretch, I glanced at my watch and it showed 49:44, and I knew it was just out of reach based on the distance I still had to run. I finished the 10km in 50:03. SO CLOSE! But this is far and away, a new 10km PB for me on a flat course. I once ran 49:59 in 2012 in Toronto, but that was on an almost entirely downhill course, so I don’t count that one. This is a significant PB for me by more than a minute. 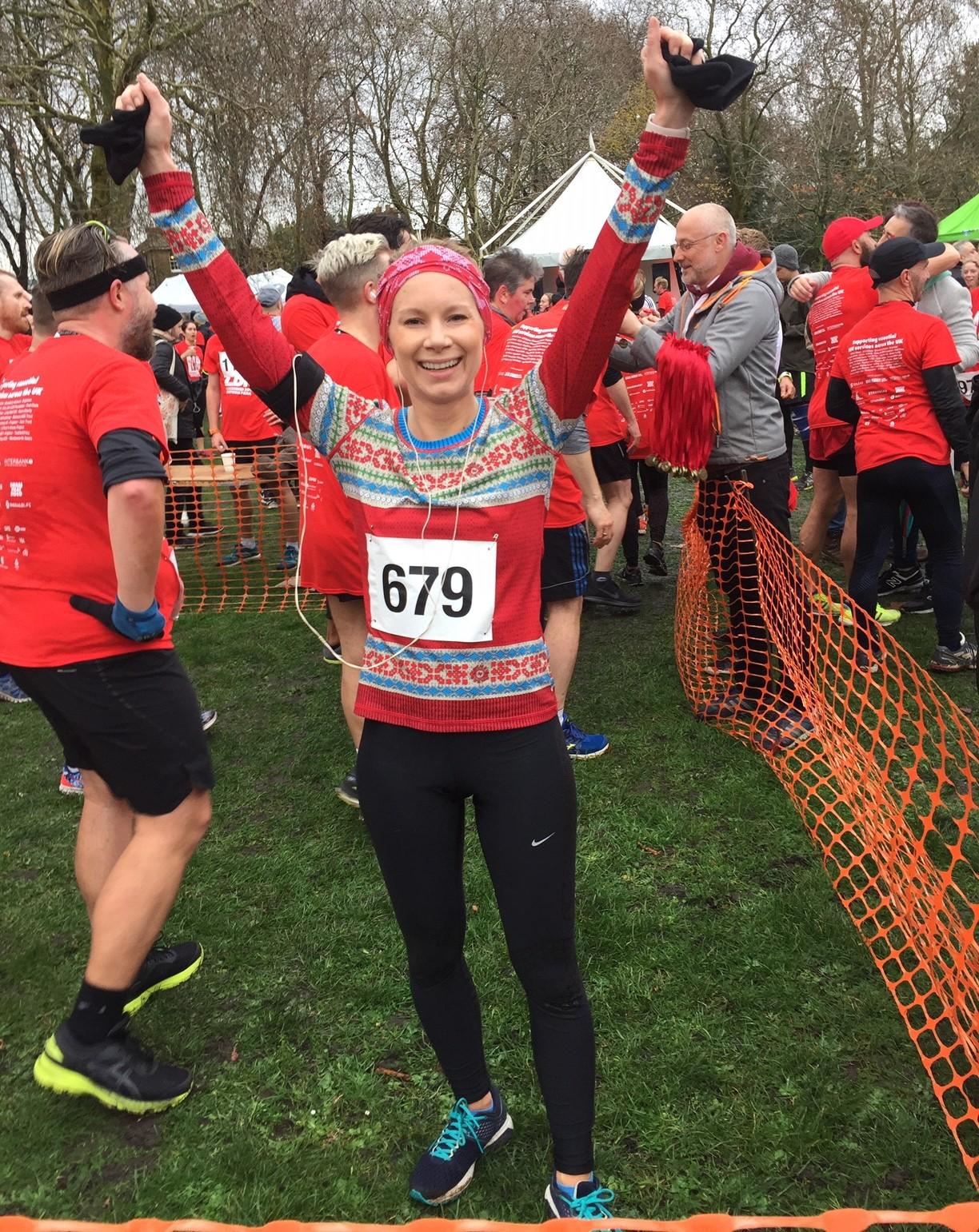 It was also a significant PB for Graham, who finished the 10km in 48:30. This is especially impressive given that he’d just arrived home from a week in Dubai the previous morning and was quite tired and jet-lagged! 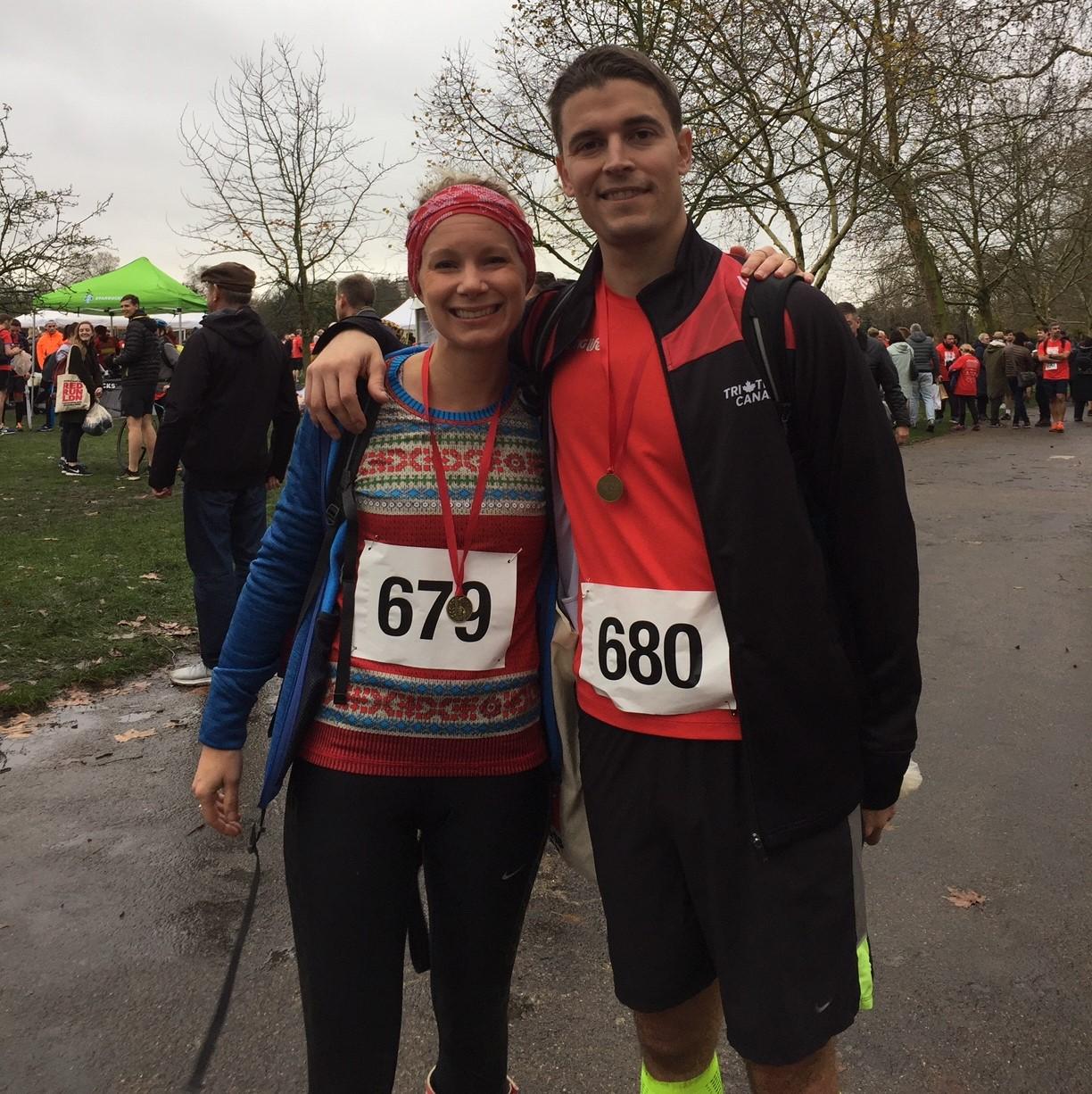 As soon as I took a celebratory photo and got my little medal, I went to find Ian and give him a big, sweaty hug.

For me, it really was more than a 10k run. I have never been more overjoyed at the success of an event. I was literally grinning ear-to-ear for the early stages of the run, reflecting on how everything went and how well the community responded. While a lot of the little details were probably overlooked by the average attendee, every change was hugely obvious to me and I was literally giddy with joy to see it all come together after so many months of planning. 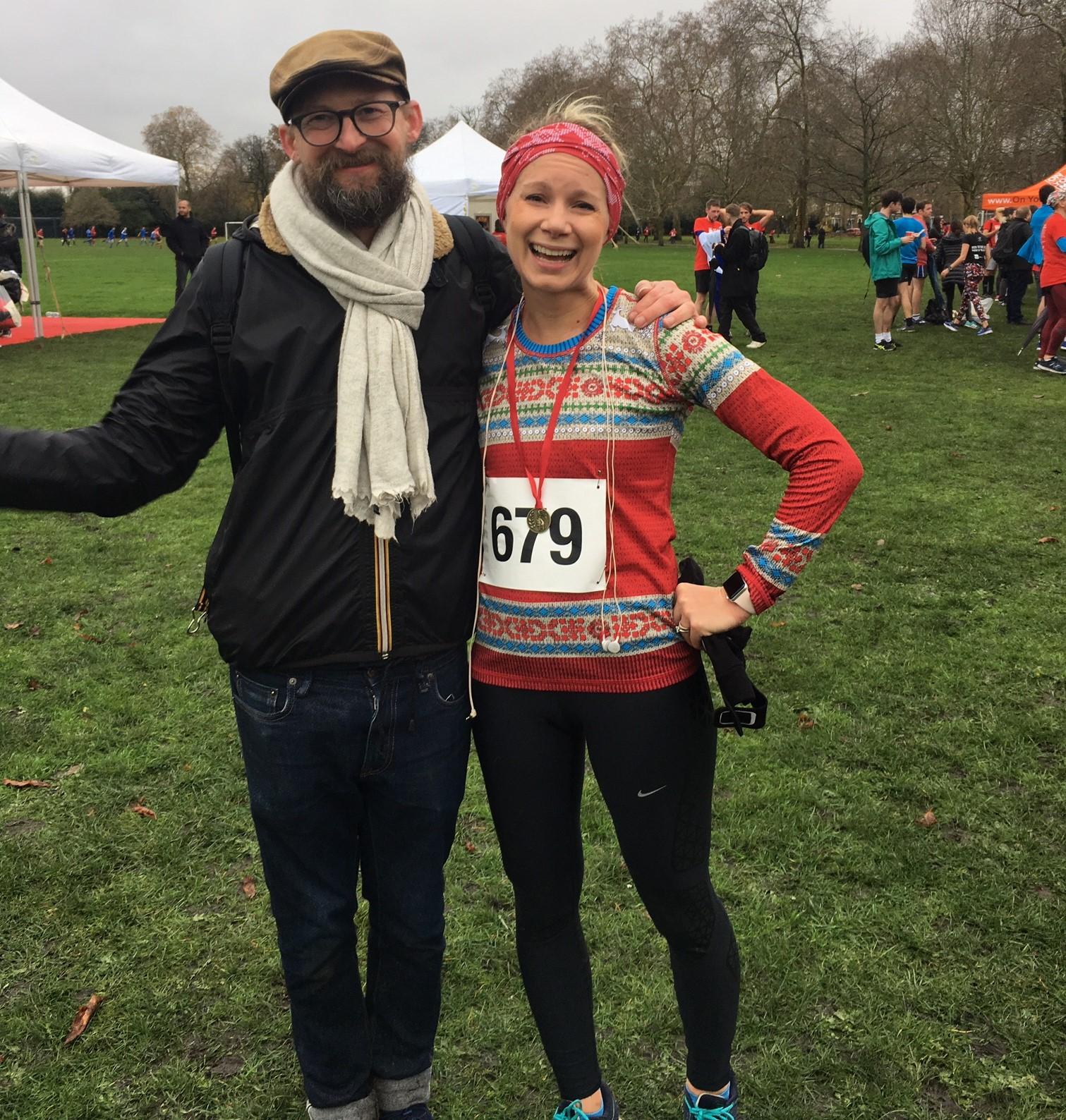 So to Ian, and everyone at Positive East, thank you for letting me be a part of the Red Run. You did a marvellous job and I am so proud and honoured to have played a small role in it this year. Congratulations on a beautiful, important and successful community event.