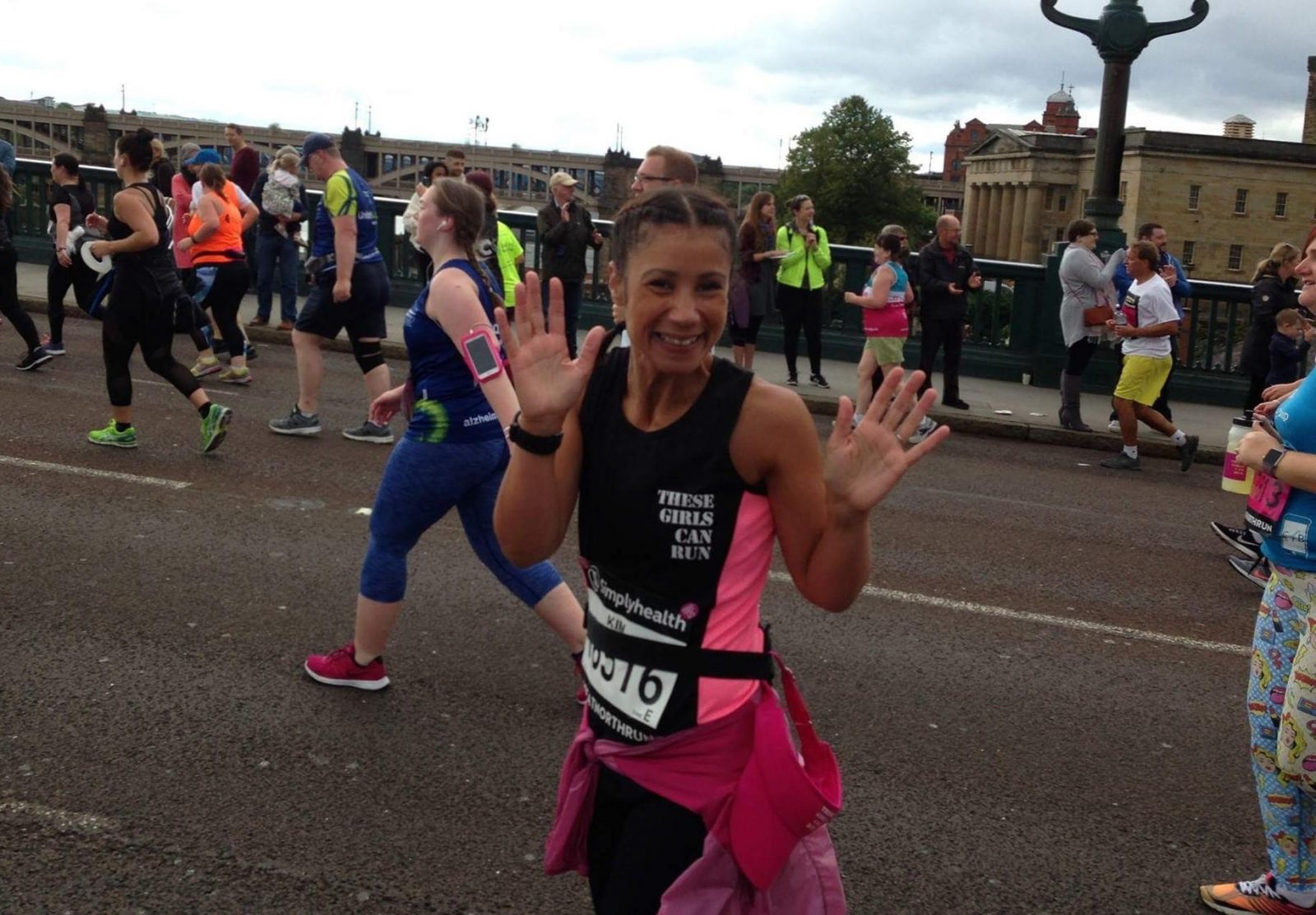 Kim Scott is the founder of These Girls Can Run, ladies’ beginner running groups which focus on positivity not pace. Kim is currently doing an amazing challenge running 52 half marathons in 52 weeks for Jessica’s Sarcoma Awareness. Jessica was a young girl who lived locally and before she died, had a dream of building a retreat for children and their families battling cancer. Kim is now raising funds to help make Jessica’s dream a reality. In between her manic half marathon schedule, she very kindly agreed to answer five questions about running…

My entry to the Great North Run in 2015 cost about £50 but I had no idea how it would change my life. I had run the Great North Run before but this particular year, I decided I didn’t want to train alone. I set up a Facebook group, added a few friends and told them when I was planning to run. I turned up at the meeting point for the first run to find more than 30 ladies waiting for me. In the days following that run I received message after message from ladies who told me they had heard about our running group and really wanted to come along but they were worried they were too overweight/unfit or that they’d be left behind. Hearing those words took me back to my early twenties when I was in exactly the same position. I was five stone overweight and extremely unfit and too scared to join a gym. I taught myself to run lamp post to lamp post in the dark so no one could see me. It was from these messages and my own journey that These Girls Can Run was born. I eventually left my job in the police force to follow my heart and work on These Girls Can Run full time. We’ve now grown to 12 groups nationwide and our group ethos will always be one of support and encouragement in a group where no one gets left behind.

I suffered from Post Natal Depression after my daughters were born and although at the time I realised that running really helped my mental health, I didn’t really understand why. Over the last few years, I’ve learned how to run mindfully and I would say this has massively improved my running. I’ve found when I run without gadgets and music, there are times when I become so in tune with my breathing, my body and my surroundings that I feel I could just run and run and run and I know that as soon as I tap into those feelings I’m running at my best. 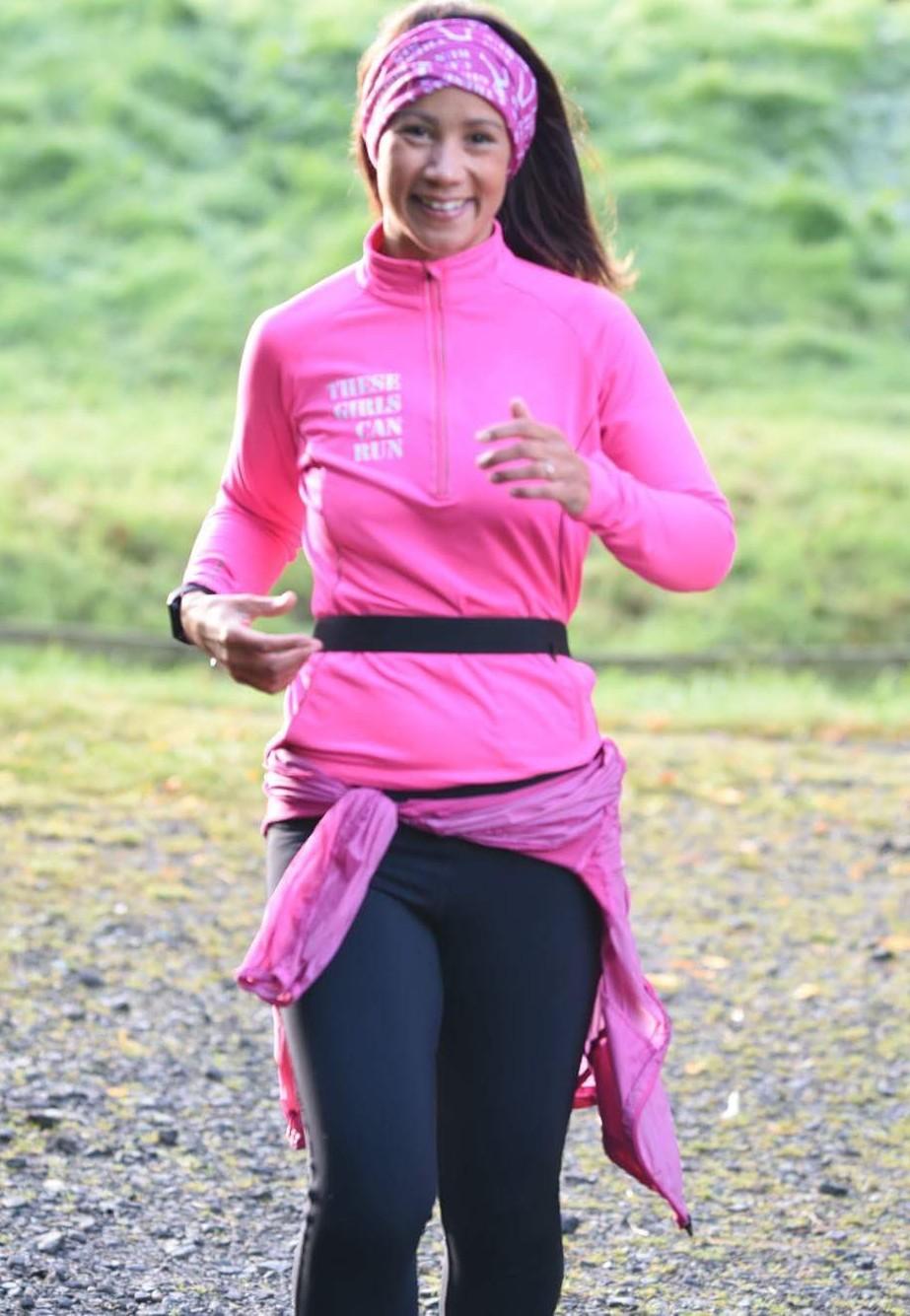 When you are at your absolute lowest point in a race or a run, what do you do or say to yourself to convince yourself to keep going?

I ran a lapped marathon this year and hated every single second. I remember ringing my husband at about mile 22 telling him I just couldn’t go on another step. He was with my two girls that day and he told me how excited they were to see me at the finish line. They were 9 and 6 at the time and all I could think about after that was what lesson I was teaching them if I gave up. I’m now at Half Marathon 41 of my challenge and I’m really struggling with hip pain. Every time I feel like quitting I think of my girls and I remember that I have to show them that even when things get hard, we have to keep going no matter what.

Ooh that’s a tough one. It’s not unusual in that I’m sure most runners have conversations with ourselves in our head but quite often I find myself having those conversations out loud and it’s not until people start looking at me strangely that I realise what I’ve been doing. Not great if there’s a few swear words in there. I also love to plan when I’m on a run on my own so I can sometimes be found dictating shopping lists or to do lists into my phone. There’s nothing like a run for making you productive!

It wasn’t really a failure as I completed it but Edinburgh marathon would definitely go down in the history books. First mistake was spending the day before walking around Edinburgh in a brand-new pair of flip flops which left me covered in blisters for race day. Second mistake was staying overnight the night before the race with a 2-year-old and 4-year-old in tow after letting them eat chocolate pizza in the restaurant. Not my best night’s sleep pre-marathon that’s for sure.

To read more Q&As with other inspiring runners, check out other people who have been featured in my Five Questions With… series. Click here!