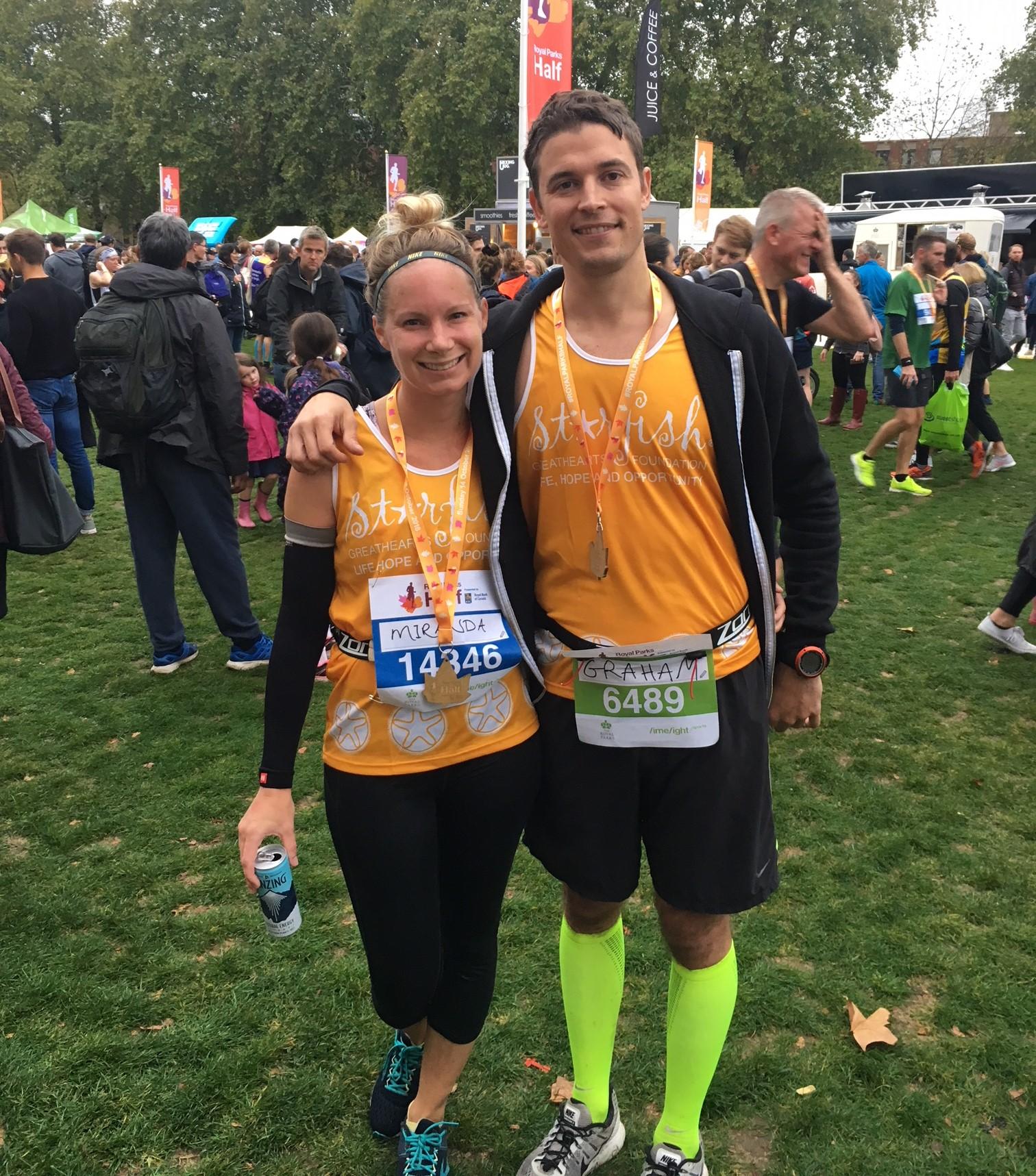 Overall, the Royal Parks Half Marathon was a great race… but it didn’t really start that way.

We were running with charity places for Starfish Greathearts, a charity that helps vulnerable children in Africa and I was sad because despite our best efforts, we hadn’t raised our fundraising target of £600 by race day.

I was also sad because it was raining. The weather forecast went from 55% chance of rain to 100% chance and it was dreary and horrible. The magical Autumnal run I had imagined evaporated and was replaced with visions of blisters and bad hair.

We also left too late and were late to the starting line, meaning I was still in line for the toilet as the race started. Thankfully, the wonderful Starfish people kept our bags safe so we avoided bag check but I was doubly annoyed that my backup iPod was totally dead despite charging it all night. I know it’s ancient technology but it’s a great backup for rainy days when I don’t want to run with my phone.

By the time I finally got to my starting pen, I was flustered and angry. I was wearing a garbage bag standing in the rain alone huffing with frustration.

I felt like I was weaving and dodging people for several miles. I just couldn’t find a clear path to run. I was convinced I must have started with the wrong group because I felt like everyone was so much slower than me. I know that makes me sound like a jerk. I am not that fast. But it just added to my general annoyance.

Anyway, I finally settled into a good pace and constantly passing people had stroked my ego. I was no longer mad. I was on track for my best half marathon ever and I was in the zone and determined.

I was so determined in fact that I barely paid attention to the sights around me. I vaguely remember the route which is a shame, because I know the Royal Parks Half Marathon route is world-class.

At 18.3km, my watch died. Just shut off. From 100% to nothing. Apple, seriously, you have got to do better than this. The Apple Sportwatch with Nike+ is such a colossal disappointment as a sport watch. I was averaging 5:23/km up until that point and I felt oddly fresh so I just kept it up, pushing as hard as I could for the final mile.

I crossed the line without much fanfare. I had no idea if I’d met my goal time of 1:55 or not but I knew it had to be a personal best.

By the time I made my soggy way back to the Starfish stand, I had already received a text with my time. 1:54:59! I obviously paced that perfect time with my sixth sense. Boo Apple watch. 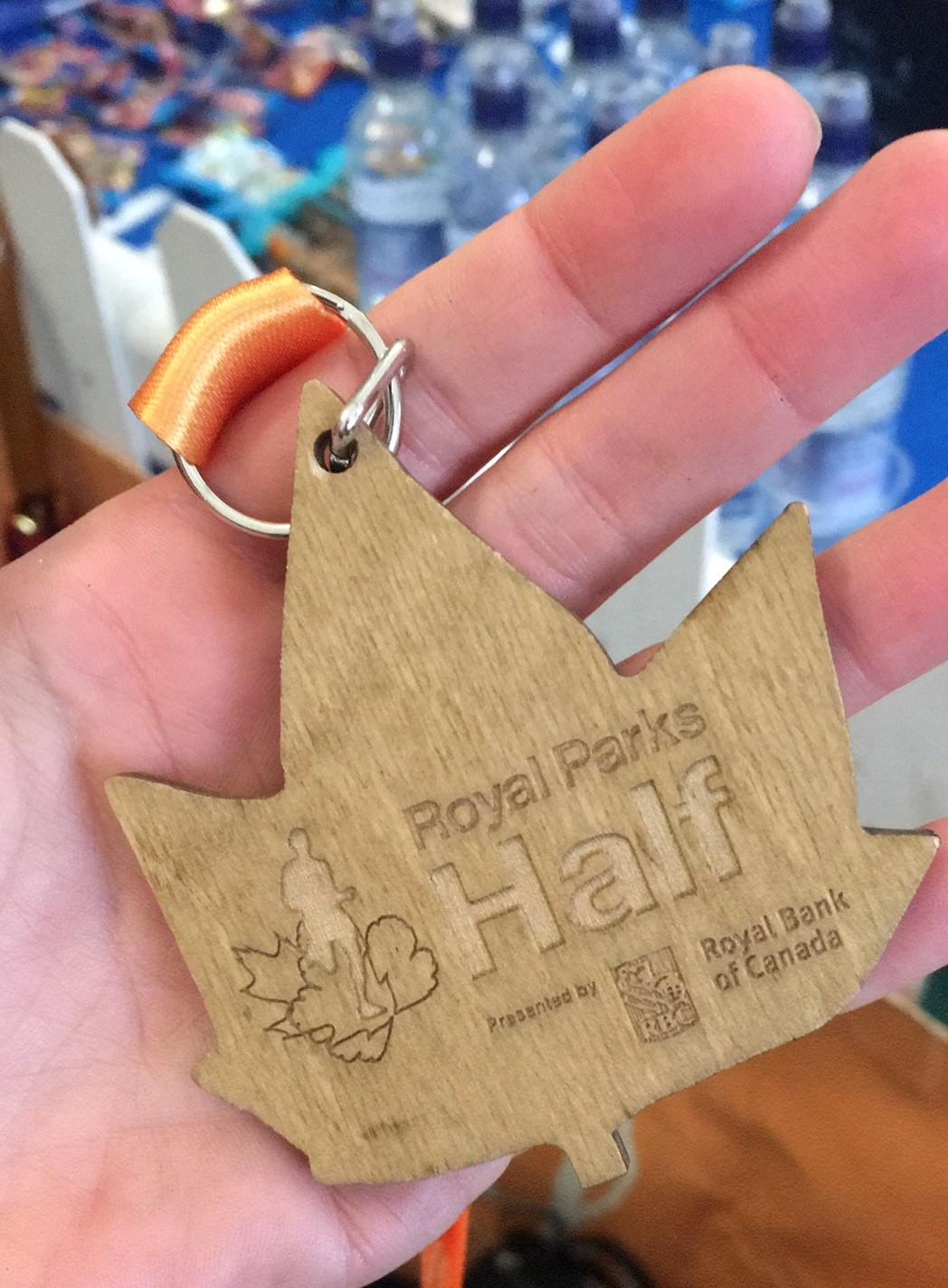 All my annoyance evaporated, and I was very smug with my result. My previous personal best was 1:57:39 set last year at the North London half marathon, so this is a considerable improvement. I was bound and determined to PB in this race. Having just turned 35, I felt like I needed to prove to myself that fitness improvements are still possible. I am not declining athletically as I age after all! Well, at least not yet!

Later that day, we also received a few final donations to our JustGiving page and I am so happy to report that we have now met our fundraising goal for Starfish! I am endlessly thankful to the 19 different donors who gave us money. A huge thank you to you all. Seriously. You guys are the best. 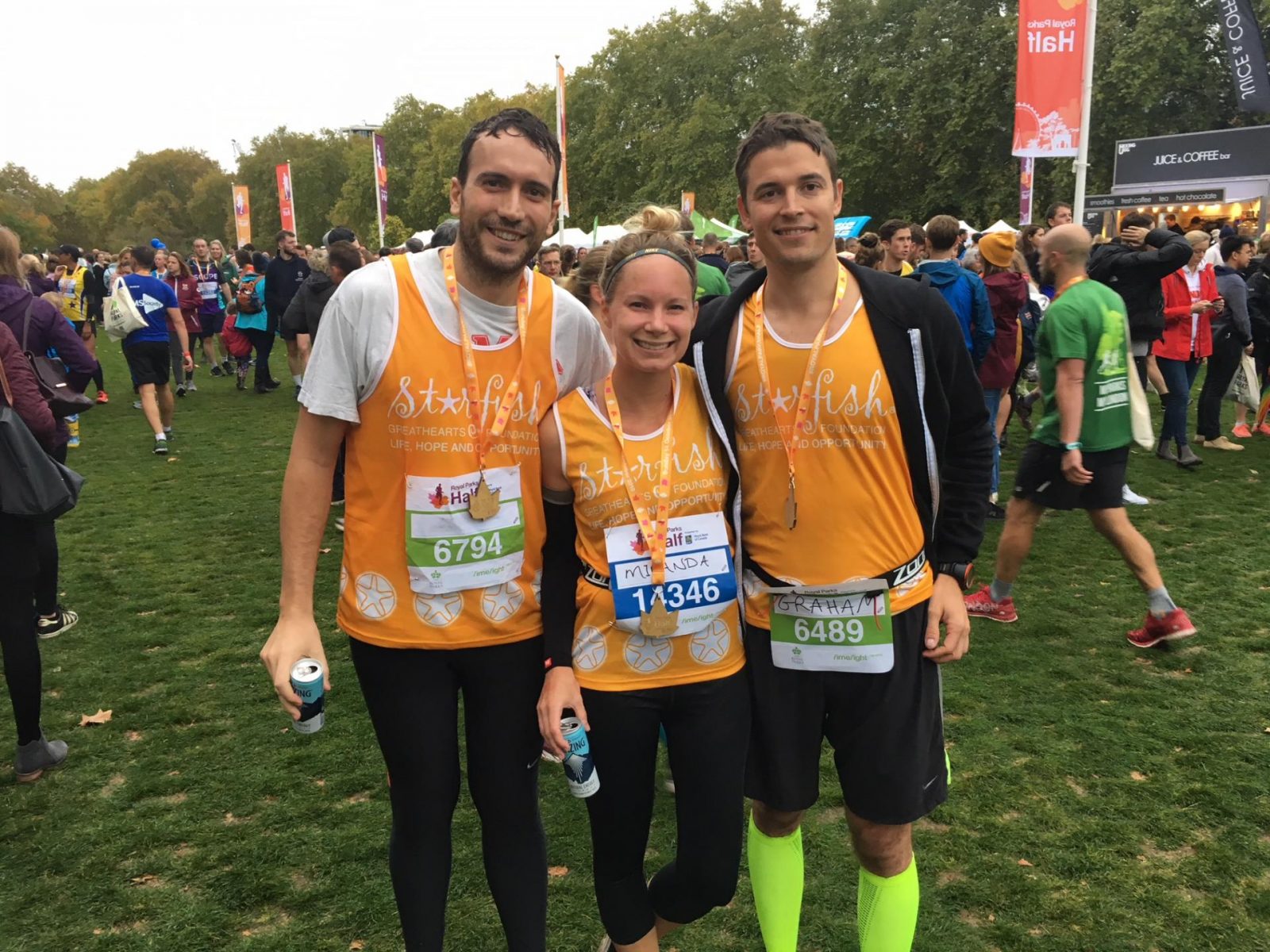 And of course, there’s no reason why you couldn’t still donate. We did run a half marathon in the rain after all!

A big shout-out to Graham who was just a few seconds off his PB, and to our friend Paolo who completed his first ever half marathon AND he was the top fundraiser for Starfish! What an accomplishment for your first event. 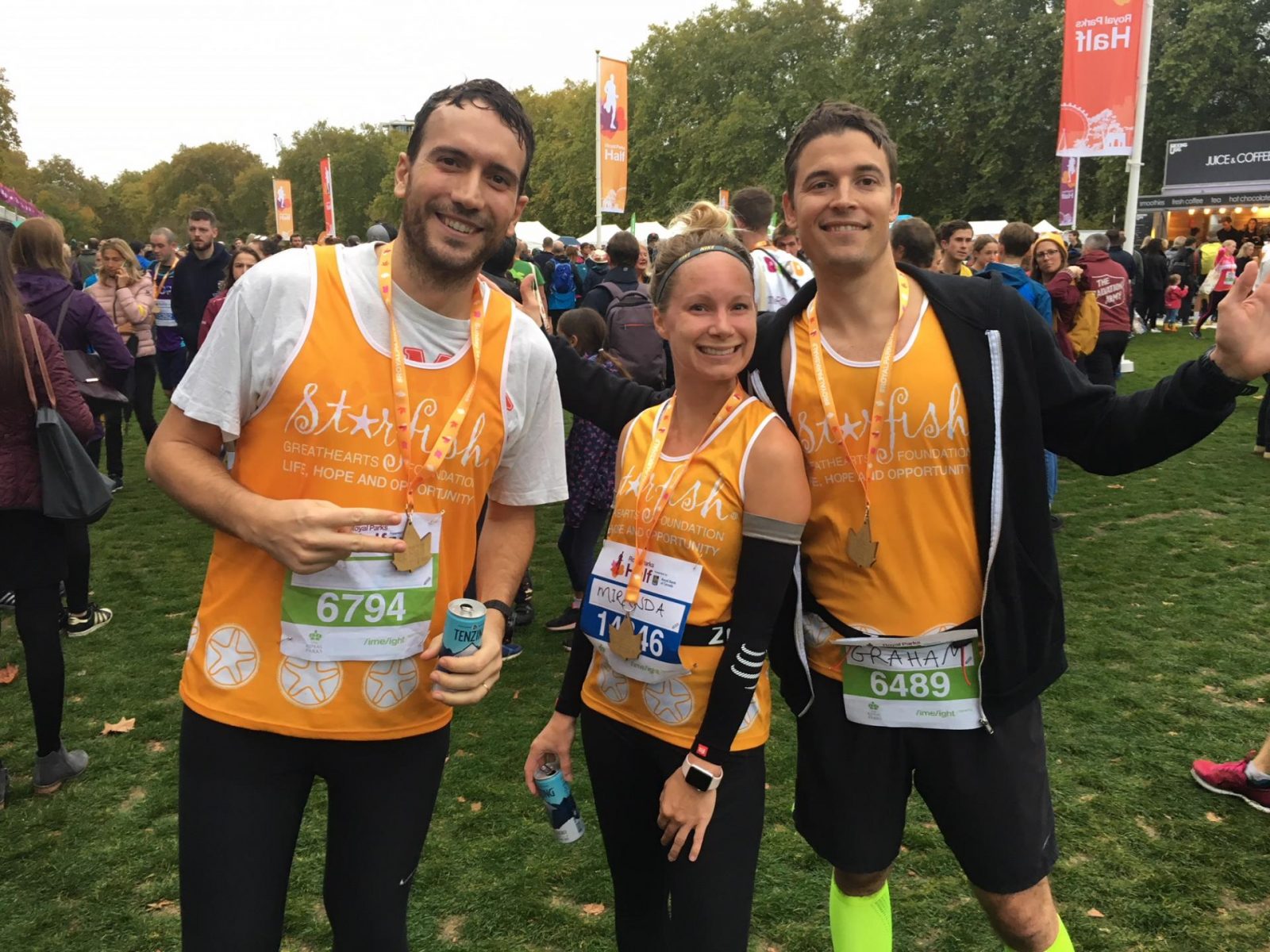 That’s my last big event of the year. Next up: I’ll be doing the Red Run, a charity run in Victoria Park on 1 December for World AIDS Day. It’s a great event and I encourage you to register. More to come on this event in a future post.

Till then, I shall bask in my PB and my rest day. I’m not even that sore… maybe I should target sub-1:50 next time….?