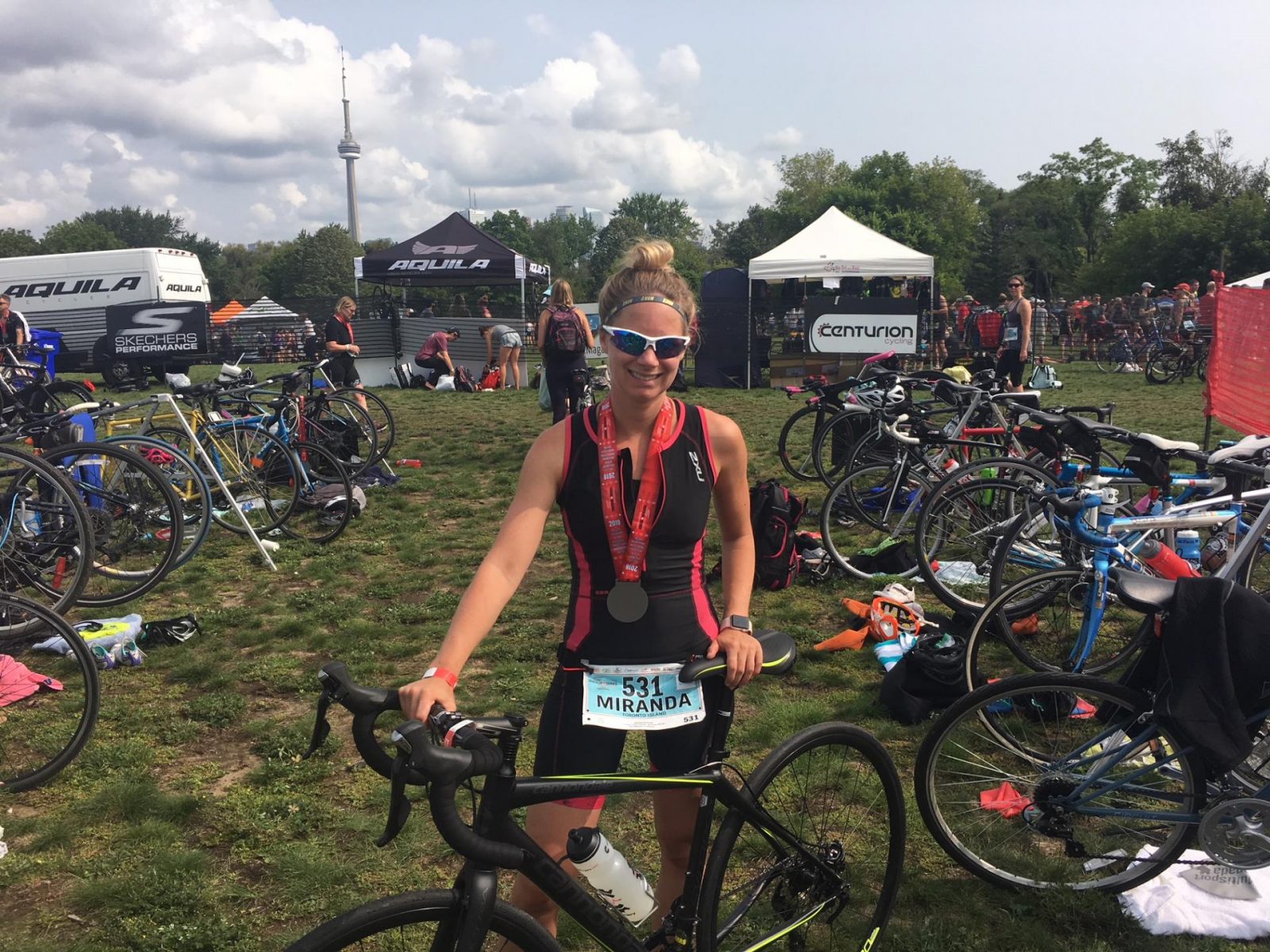 This past weekend, I did the Toronto Island Triathlon. I was back in Canada, visiting friends and family and my mother-in-law and brother-in-law were both signed up for the race which takes place on a small island in Lake Ontario, just a short ferry ride from downtown Toronto.

I really hadn’t planned to do another triathlon this year but after the blow-up of a race I had at the London Triathlon just a few weeks ago, I wanted redemption. This time, it would be a Sprint distance triathlon vs. the Olympic and even though this would be my fifth triathlon, it would be my first in Canada! How could I say no!? I felt well prepared and was excited to smash my PB set two years ago. 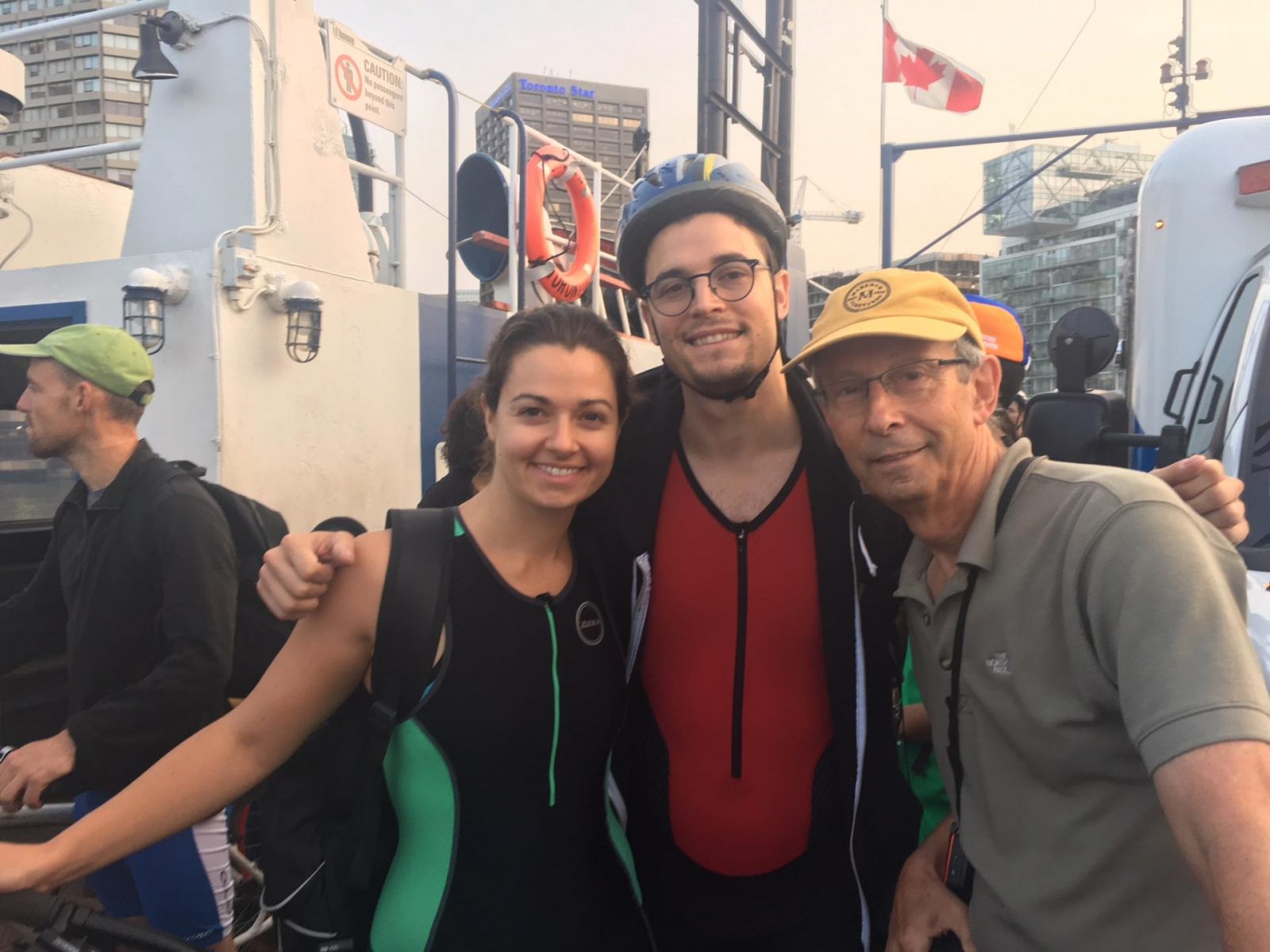 My sister-in-law Claire, husband Graham and father-in-law Ian on the ferry on the way to the island.

Of course, any race in another country poses some logistical challenges. We didn’t have our bikes so we needed to rent them. Luckily, we were both able to rent decent road bikes from a shop called Gears. They were very helpful and for just $75 Canadian, I got to use a slick looking black and neon green Cannondale road bike for the day, which I think is better than my actual bike. Win!

The race was also on our final day of our trip home. Do we really get up at 5 am, do a triathlon and then fly back to London in economy overnight? Yes. Yes, we do. I imagine people think this is a bit insane, but it was totally worth it. It was such a great day! 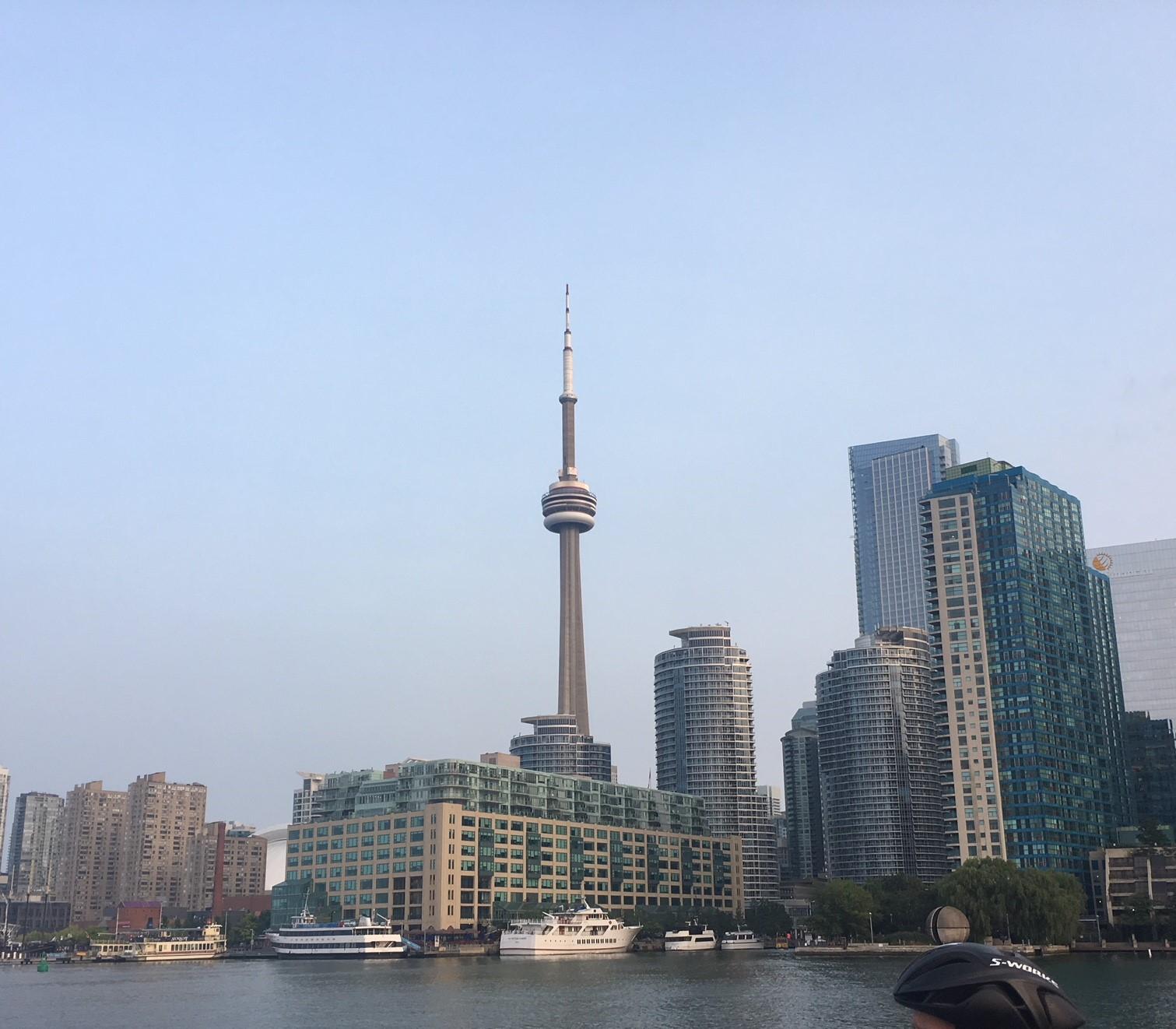 View of the Toronto skyline from the ferry

We decided to all switch to the same wave so we could start together, not realising that we had switched ourselves into the Men’s 40-49 category – not relevant for any of us! We were mildly concerned about aggressive alpha males thrashing around but it was all quite civilised. We started on the beach and the water was pleasantly warm and calm. 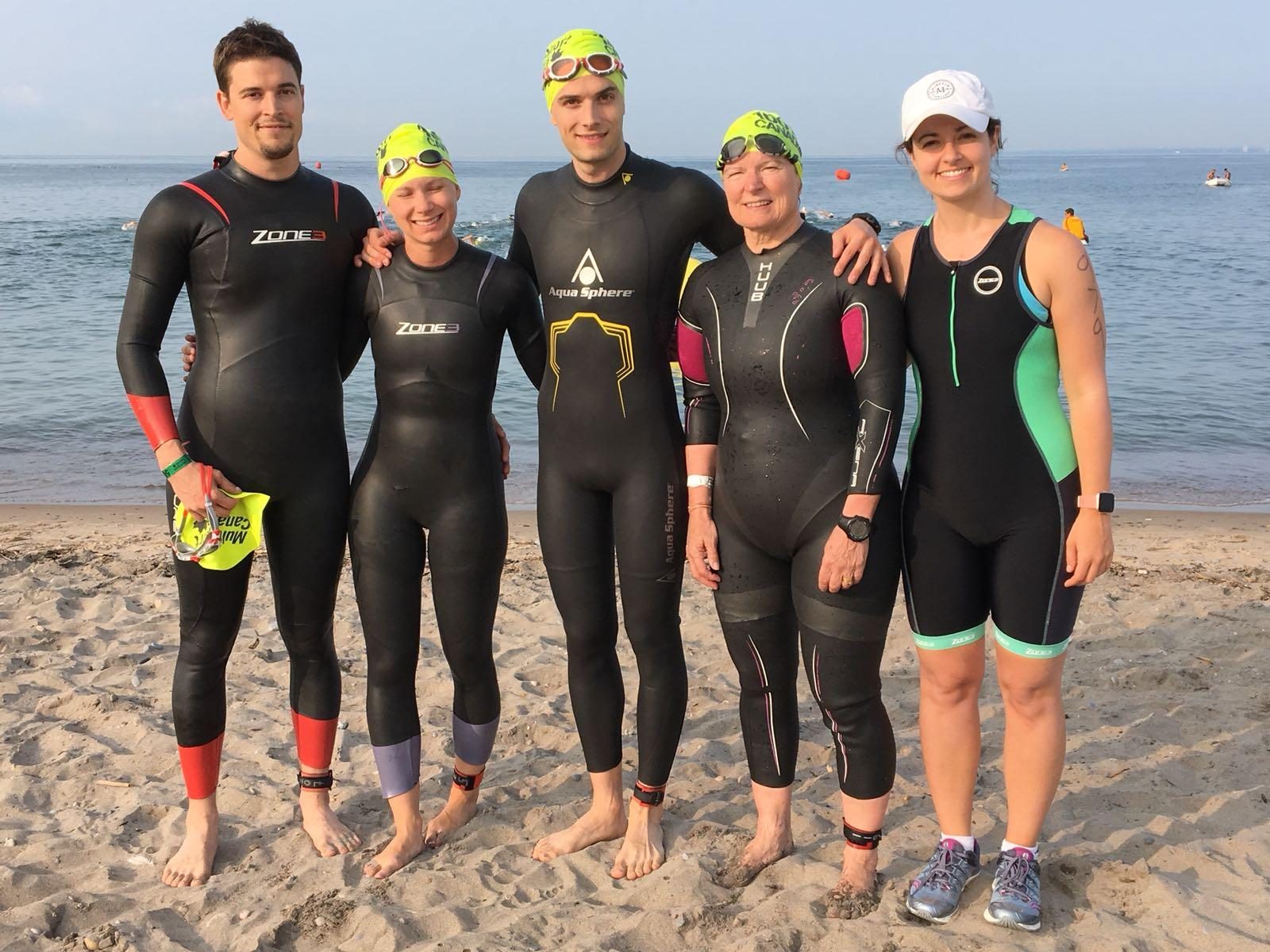 Preparing for the race start! Yes, my eyes are closed. It was bright!

Once we got going, I was surprised to see how long I could actually see the sandy Lake bottom! It was so clear! (Oh Canada! I miss your lovely Lakes!) I did not panic this time. I was calm and swam well and in the last 200 metre stretch, I felt like I was swimming really fast. I was channeling my inner mermaid and I kept swimming as long as I could. I swam until my chest basically touched the sand and then got out and ran!

The transition to the bike area was long! We had to run along a beach in the sand for a bit, then over a boardwalk, then along some grass and then finally into transition. I found my bike easily – it was a small race after all (just 490 participants). I chucked on my shoes and helmet and dashed away.

I was excited to ride my rented bike. I couldn’t rent cycling shoes, so I didn’t have to worry about clips this time. If there were some climbs, I might have been in trouble but this race was completely flat so it didn’t matter much. 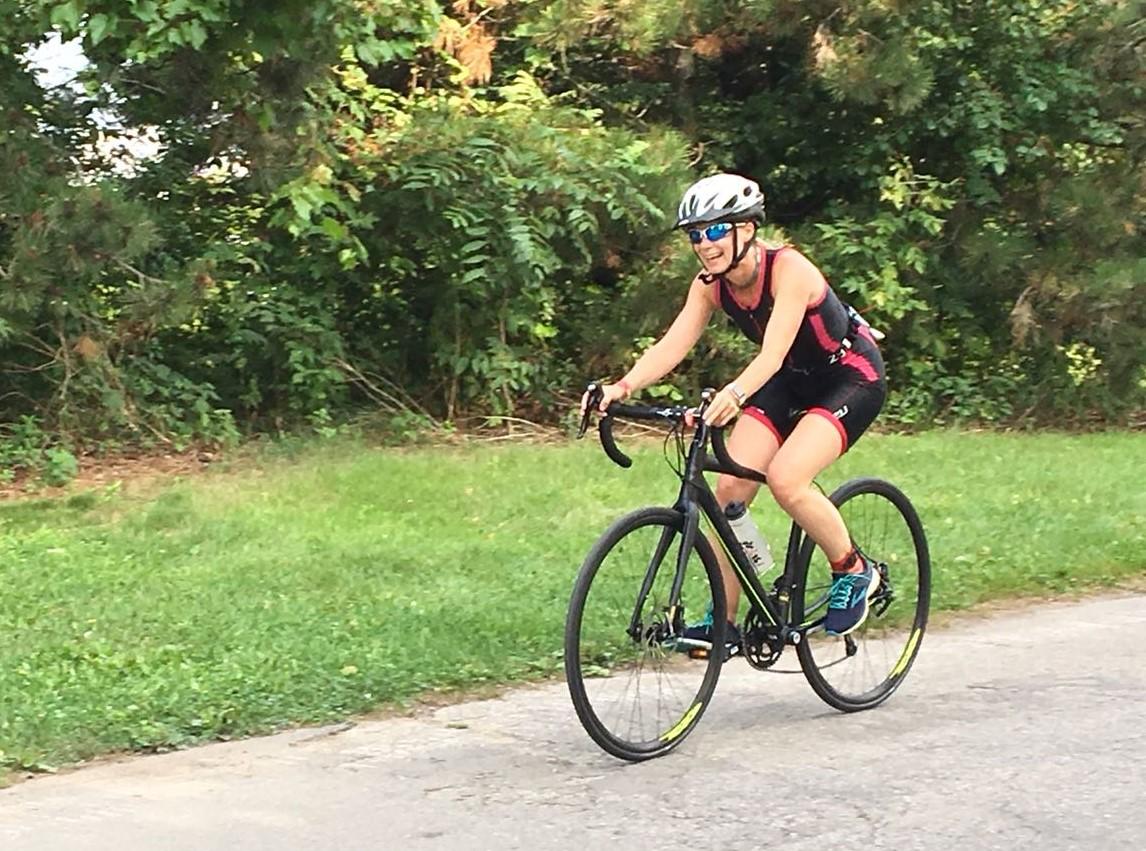 I cycled well, averaging a pace of 28.71km/hour. I had a target time in mind and when I crossed the 10km mark, I glanced at my watch and saw 27 minutes. I was totally demoralised. That was SO slow! Oh well, I thought. I’ll just keep pushing. It wasn’t until I rounded 15km that I realised I had looked at my SPEED and not my total time and got confused.

Next up was the run – my favourite part! I didn’t have to change from cycling shoes to running shoes this time so my transition felt super quick. I grabbed one quick sip of water and ran away as fast as I could.

The run was four loops of a little P-shaped course. It wasn’t a very exciting course and loops felt a bit tedious. I didn’t feel like I was running tremendously fast, but I kept pushing it as hard as I could. The one nice thing about a looped course is that I saw my family several times throughout the race and could shout words of encouragement at them! The third lap felt interminable, but I picked it up in the final lap to bring it home.

I crossed the line just 8 seconds behind Graham who passed me in the run, finishing the race in 1:29-28. This is a MASSIVE PB for me for the Sprint distance triathlon. My previous best was 1:47:48. This time was good enough to put me 7th in my age group and 36th out of 167 women. I’m so pleased with this! After the London Triathlon, this feels like REDEMPTION! YESS!!!

But the joyous race-day victories were not limited to just me. Not only did my mother-in-law also achieve a personal best, she placed SECOND in her age group! We were so very proud of her! 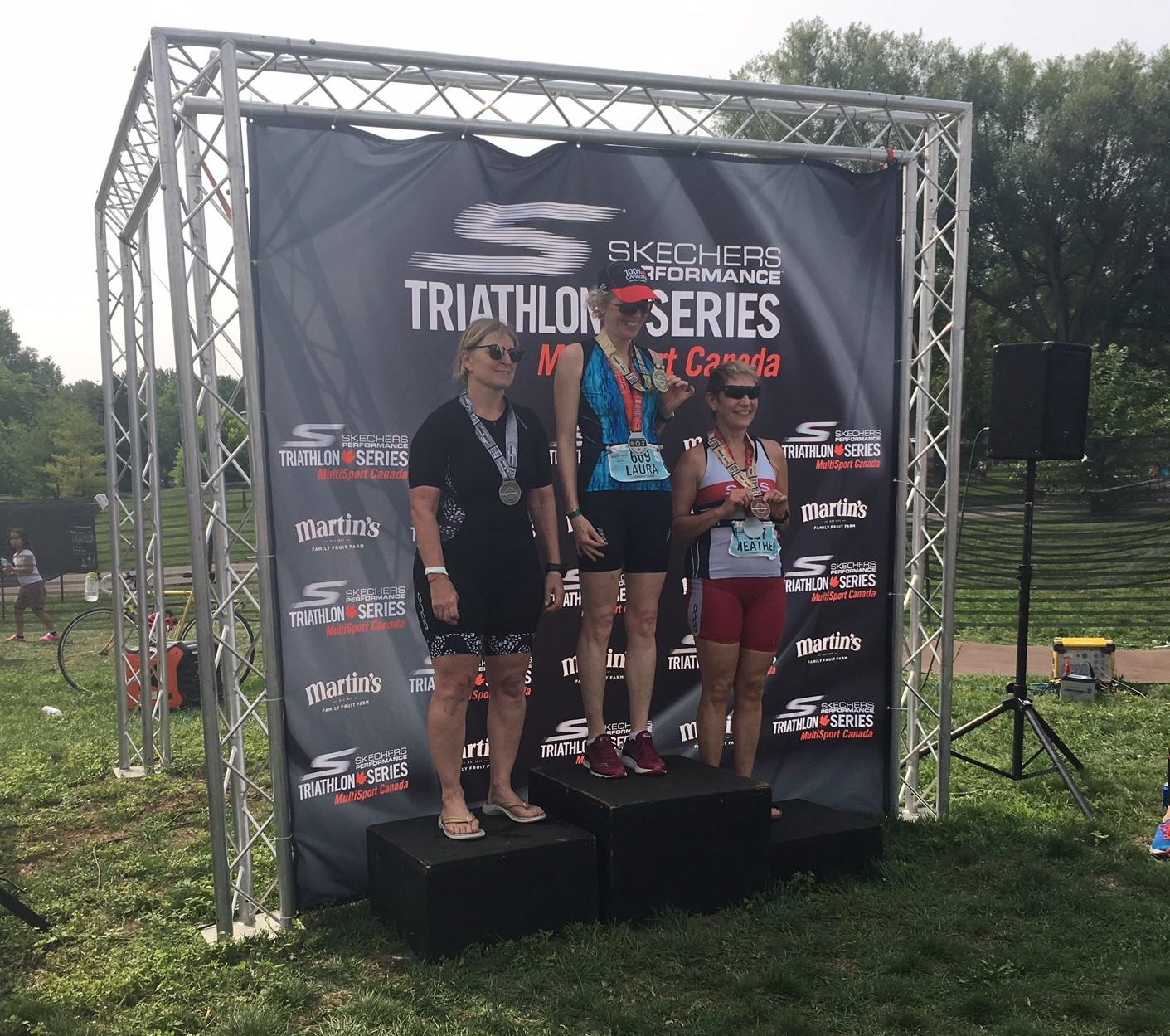 We also somehow convinced Claire, my sister-in-law, to do her first triathlon. She finished the try-a-tri in under an hour and quite literally seemed to skip across the finish line. Sprint distance next year, Claire? 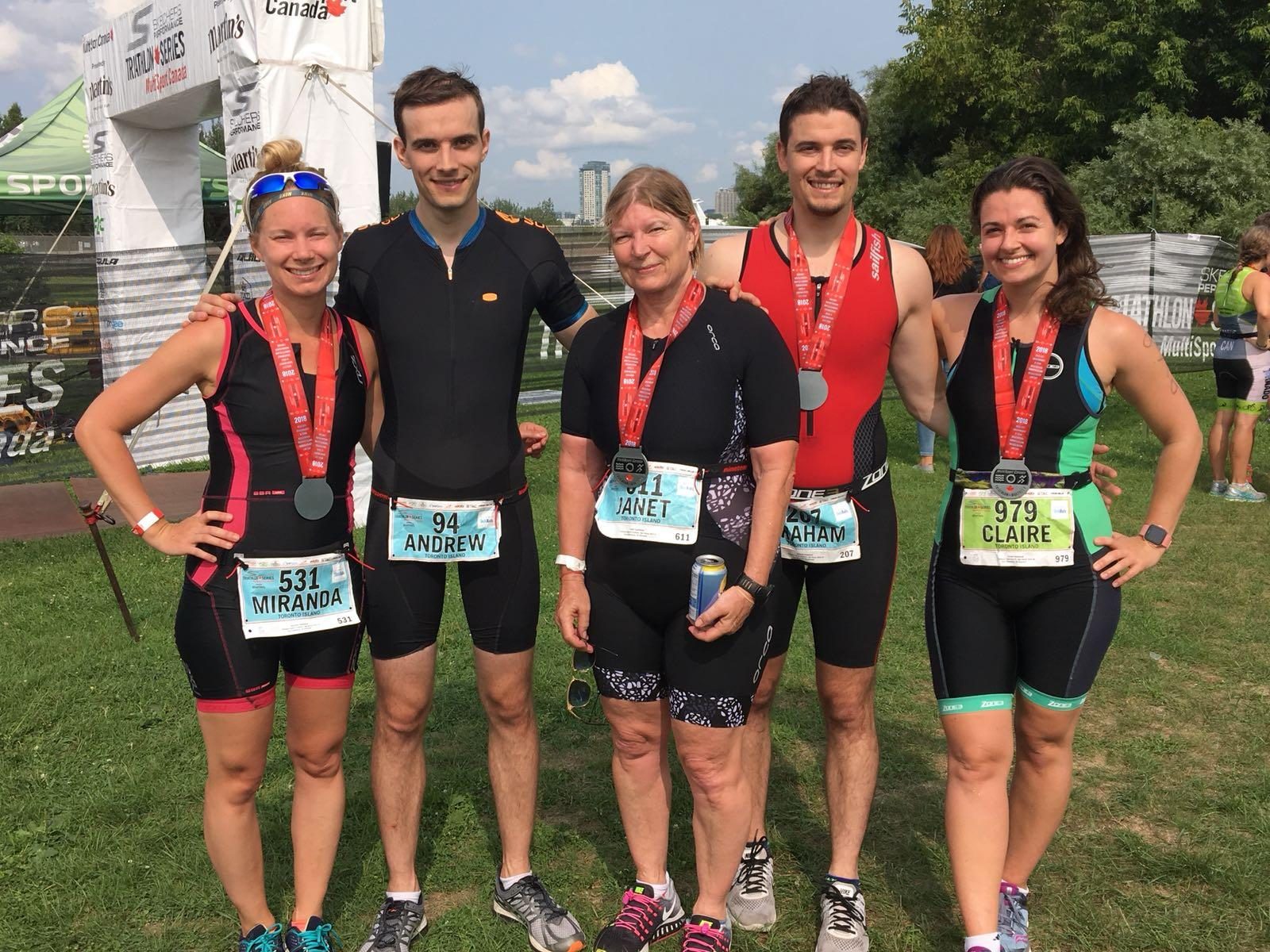 Andrew, my bro-in-law also achieved a personal best, shaving several minutes off his time. Graham, my husband, didn’t have a great race overall, but he had a HUGE turn around after a mediocre swim and bad bike. It’s really tough to bring things back when you get into a bad mental headspace in a race so I’m proud of him for finishing triumphantly despite the less than ideal situation. 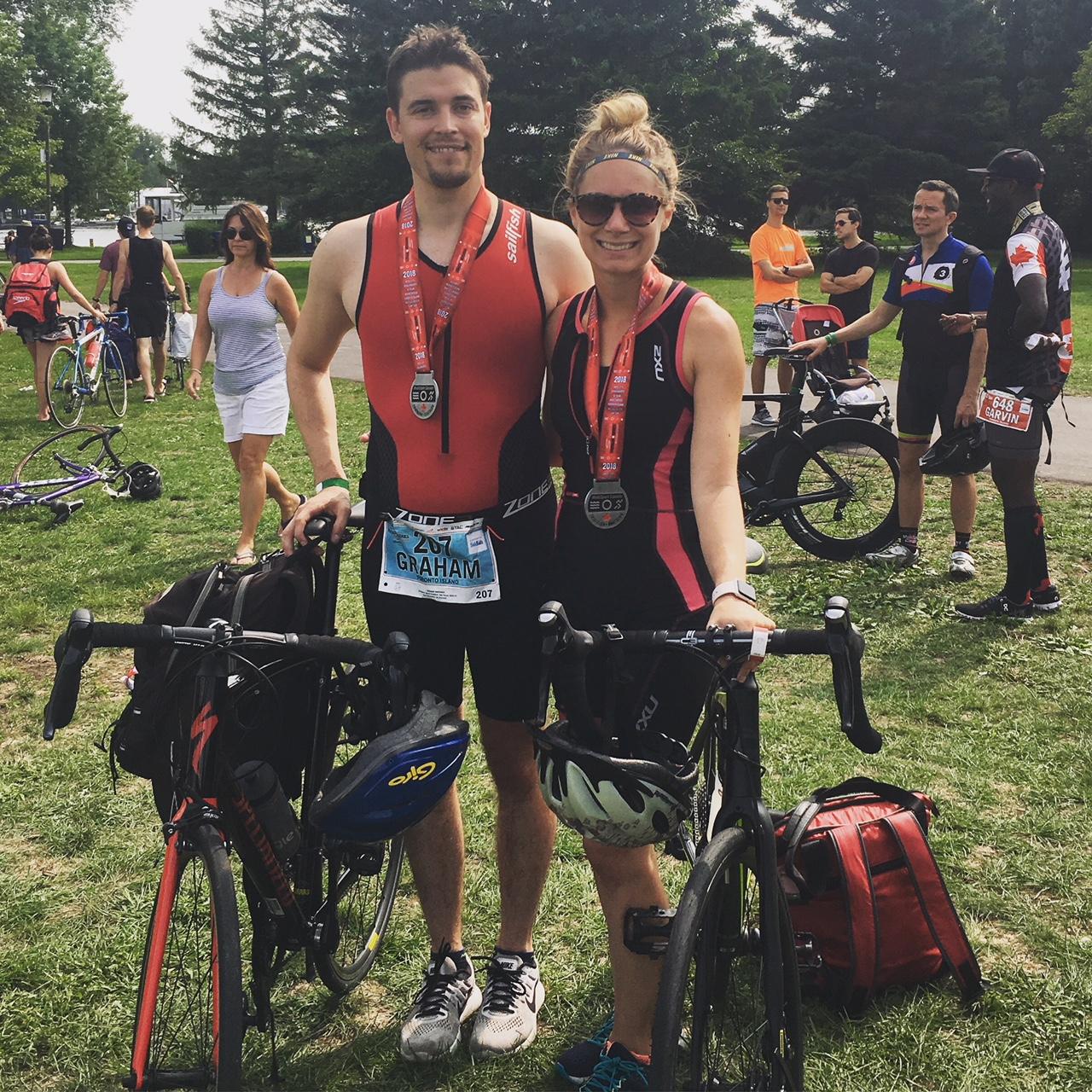 And finally, I would be remiss if I didn’t mention Ian, my father-in-law, who chased us around all morning, camera-in-hand shouting encouraging things from the side-lines. It’s always so nice to have supporters in a race and I am so very gracious for any action shots for my blog! Truly, I think his job was more exhausting than ours!

After the triathlon, we headed back to the city for a quick celebratory drink with the fam, and then off to a BBQ with friends before heading to the airport for our flight. 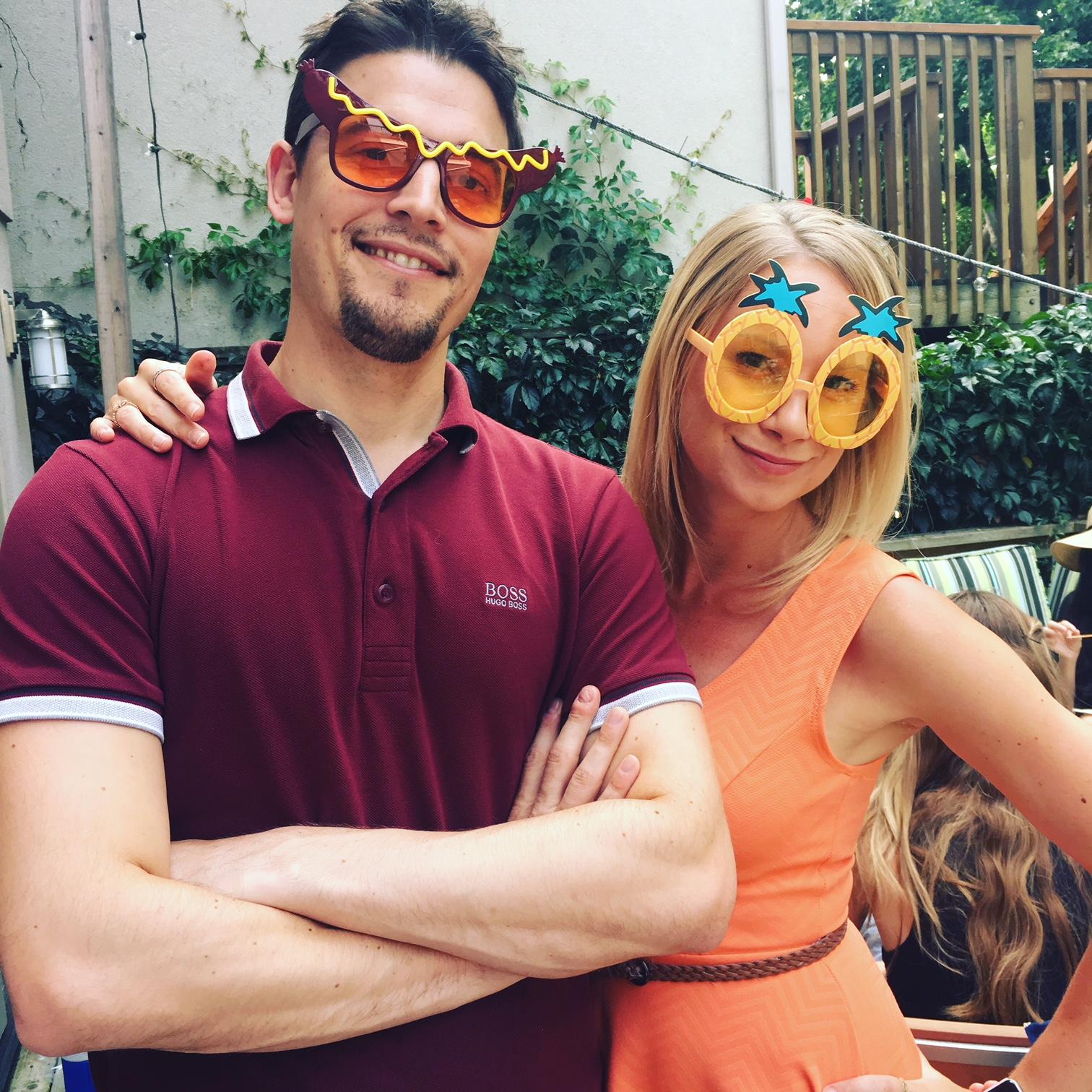 We clean up alright.

What a fabulous way to end our holiday in Canada! Hopefully our timing aligns next year. I would love to do the Toronto Island Triathlon again.