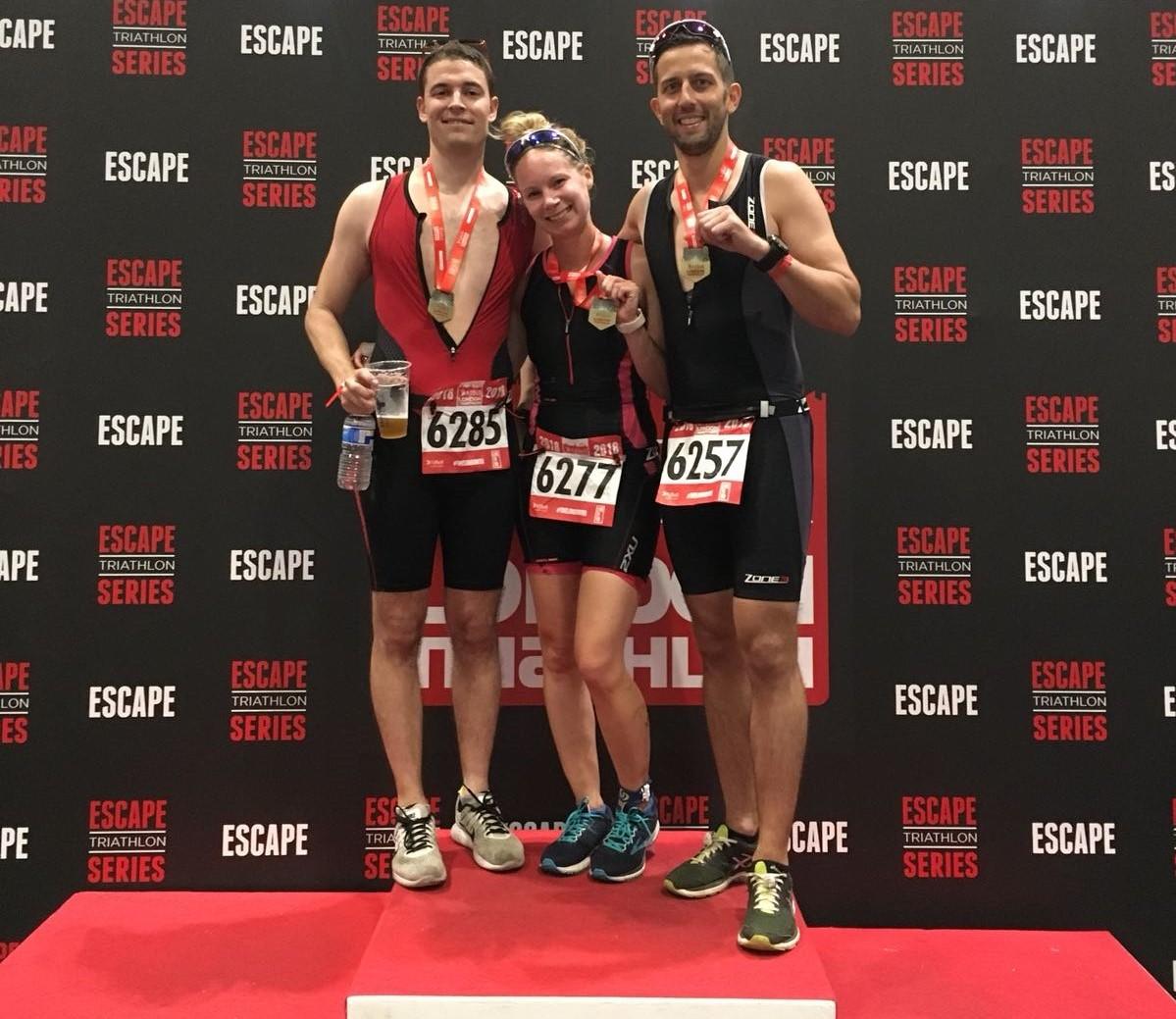 The London Triathlon was not my finest race. As a result, it’s taken me a few days of wallowing in disappointment to write this review. As usual, I worried about not being as prepared as I would have liked, but deep down, I really thought that my sub-three-hour target for my second OIympic distance triathlon was within reach. I was nervous, but cautiously optimistic.

Sadly, it was not to be.

We arrived at Excel a bit late. This was my third London Triathlon so I’m not new at this. I should have remembered how much prep time we needed and planned better. But our train timings were bad and we got to the Excel with only 40 minutes before go-time. 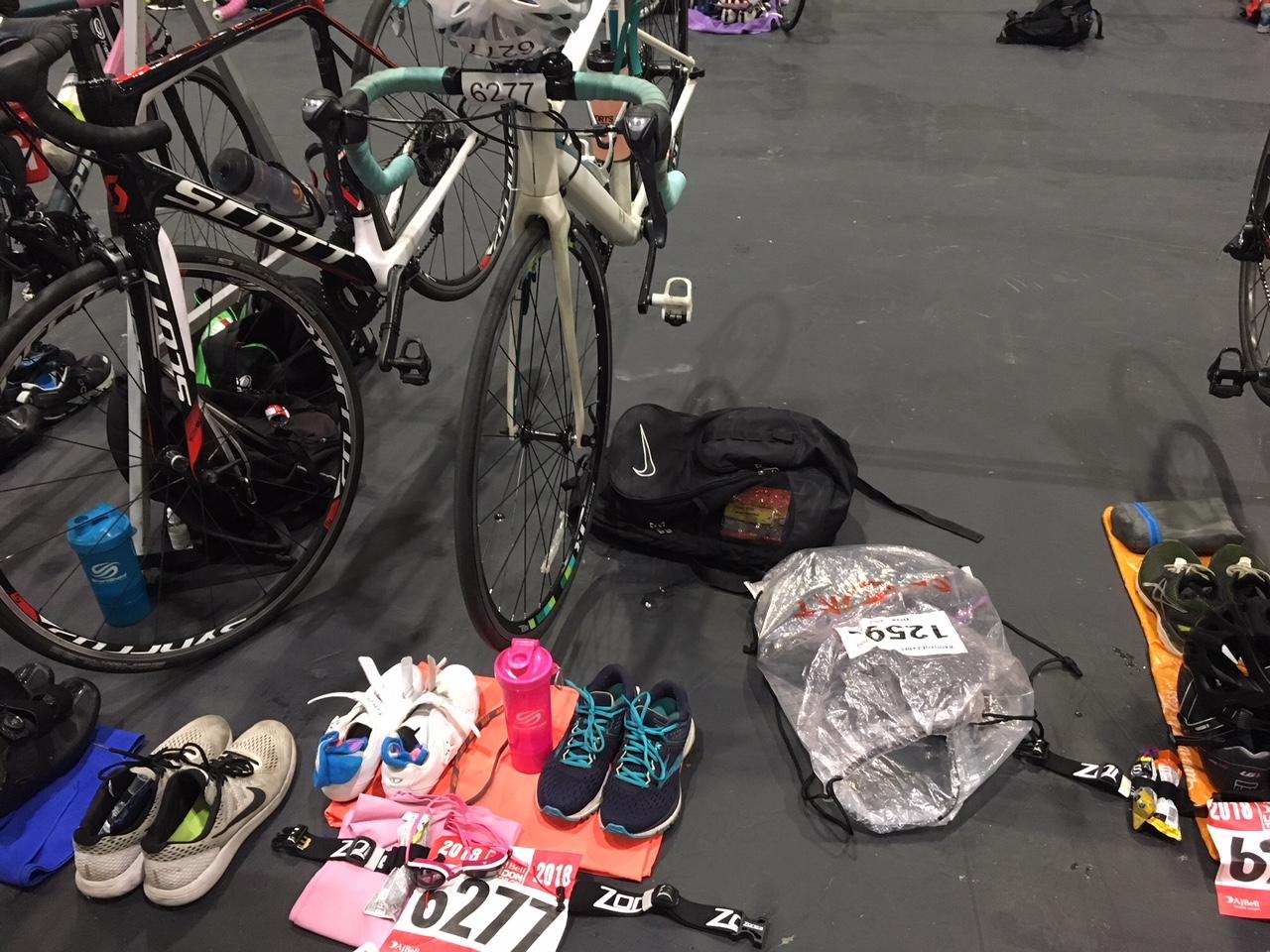 All my kit, ready to go (in record time!)

I had one arm hanging out of my wetsuit when we arrived at the swim assembly. We missed the briefing and I barely had time to jump in the water before the horn sounded to start the race. I was caught off guard and not in a good starting position. The race started at 8:05 and as a result, the sun was low in the sky, perfectly reflecting on the water. Beautiful for a casual morning brunch. Absolutely terrible for swimming. I was blind. My non-tinted goggles provided no relief and I was swimming blind with no visible indication of my destination. I panicked. I just couldn’t get my breathing right and I kept going into a breast stroke position and shouting profanity at the sheer frustration of the whole situation. The course is marked by giant inflatable pigs and I didn’t quite find my groove until the second pig. By then, it felt too late. I’d blown it. In mind my mind, the swim took an hour at least. It was actually just over 30 seconds slower than last year. Go figure.

I powered through the transition to make up lost time. I strapped on my cycling shoes and jogged to the start of the bike route. The concrete floor was slick with water and I slipped and fell hard. Shouting some more profanity, two fellow triathletes actually stopped to help me which I thought was so nice and considerate. The nice man who stopped provided some sage advice: “Just walk out,” he said. “You’ll make it up on the bike.” I disregarded his advice and carried on jogging.

Once I was on my bike, I went hard. I was mad at myself. I glanced at my arm and it had a big red mark and a lump forming. My butt hurt from where I fell. I felt stupid. I needed redemption. I cycled as hard as I could channelling my anger for power. At one point, a motorcycle pulled up beside me. I was sure I was going to be reprimanded or disqualified for something, but instead they stuck a camera in my face and interviewed me! I’m not sure for what, but it was kind of fun! Maybe I was on TV!

I was powering up hills and feeling my confidence increasing. All those spin classes were paying off, I thought happily! But then disaster struck. Rounding a tight corner at a turnaround point, I fell off my bike!I landed hard on my right side (again!). I shouted a variety of swear words as I dragged myself to the side of the road to assess the damage to my bike and body. My hand was scraped but I couldn’t see any other visible damage (other than my dignity). My bike however, did not escape unscathed. The right handle bar was bent inward at an awkward angle. 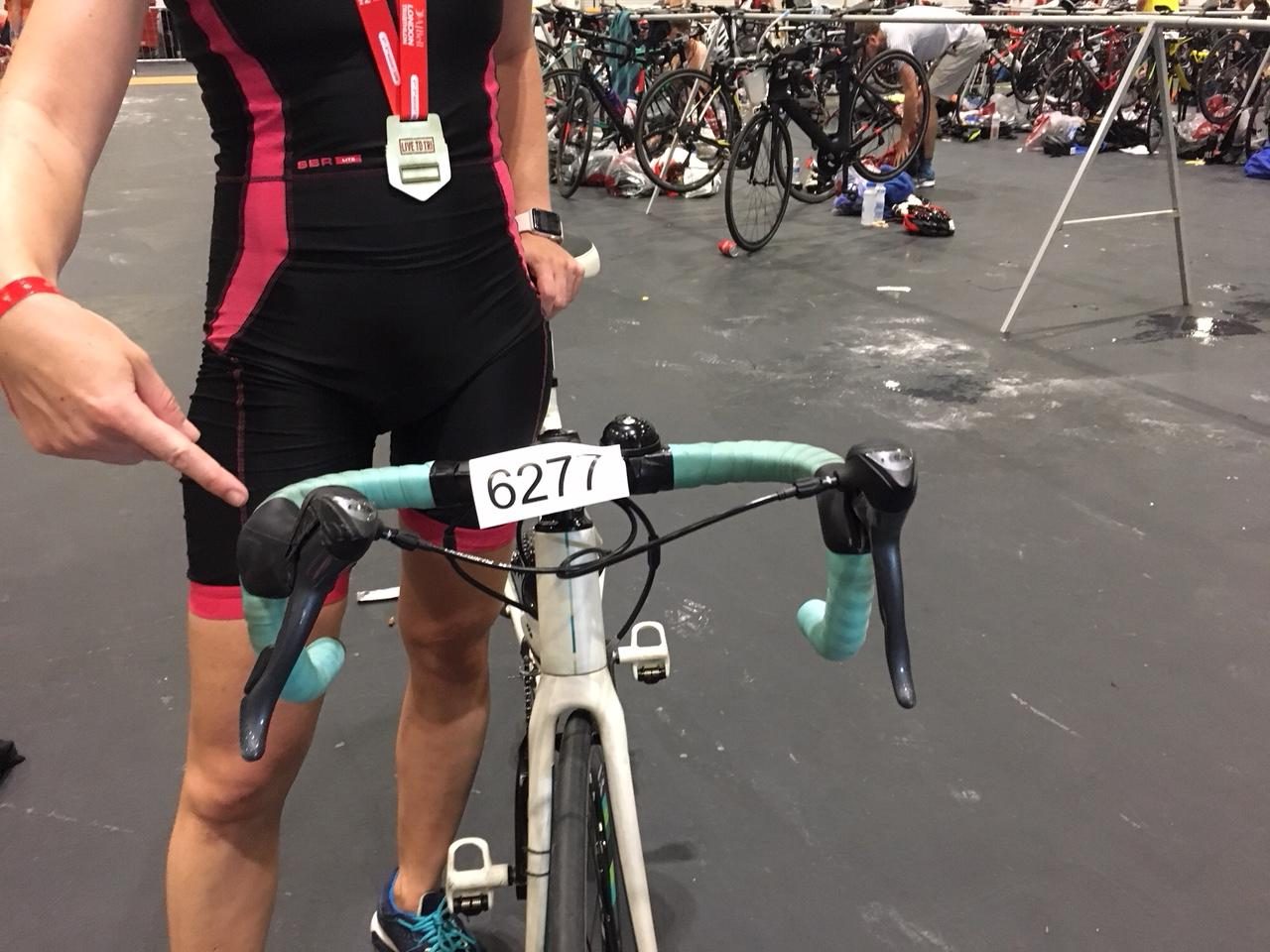 I tried in vain to straighten it but couldn’t move it. I checked the brakes and the gears and they all seemed to work fine. On the verge of frustration tears, I hopped back on my bike and carried on. F*ck it, I thought. I just have to get this done. Get to the run and then it will be fine.

I shifted into my running shoes in record time. They felt so familiar and comforting. Thank God triathlons end with running. My confidence immediately increased. I took a couple sips of an electrolyte drink and dashed away. This, I thought, is where I’ll make my comeback.

The run route is four loops. My first loop was great. I was passing people left and right and feeling altogether smug about how fresh and confident I felt. The route loops inside the Excel where it was several degrees cooler than the increasing outside temperature. It was a welcome relief. The second loop went by quickly, and I even had the energy to hum along to Fleetwood Mac’s song Everywhere that was blaring over the on-course speakers.

The third lap however, unravelled me. It felt interminable. The temperature somehow seemed to increase by 10 degrees and my legs felt like bricks. The final lap was little better than a slog. I was broken, and I felt like I was barely moving. By the time I finally got to the finish line I felt weak and deflated. My time was a personal worst for 10k by a huge margin (though, my watch and many others clocked 11.5k instead of 10 so that makes me feel a bit better). I managed to raise my arms above my head and cross the line looking like a triumphant athlete rather than the walking corpse I felt like.

I finished the race in 3:13:31, a far cry from my hopeful sub-three. I was immediately overcome with disappointment. I felt stupid for all my rookie mistakes. I was sore and hot and angry. 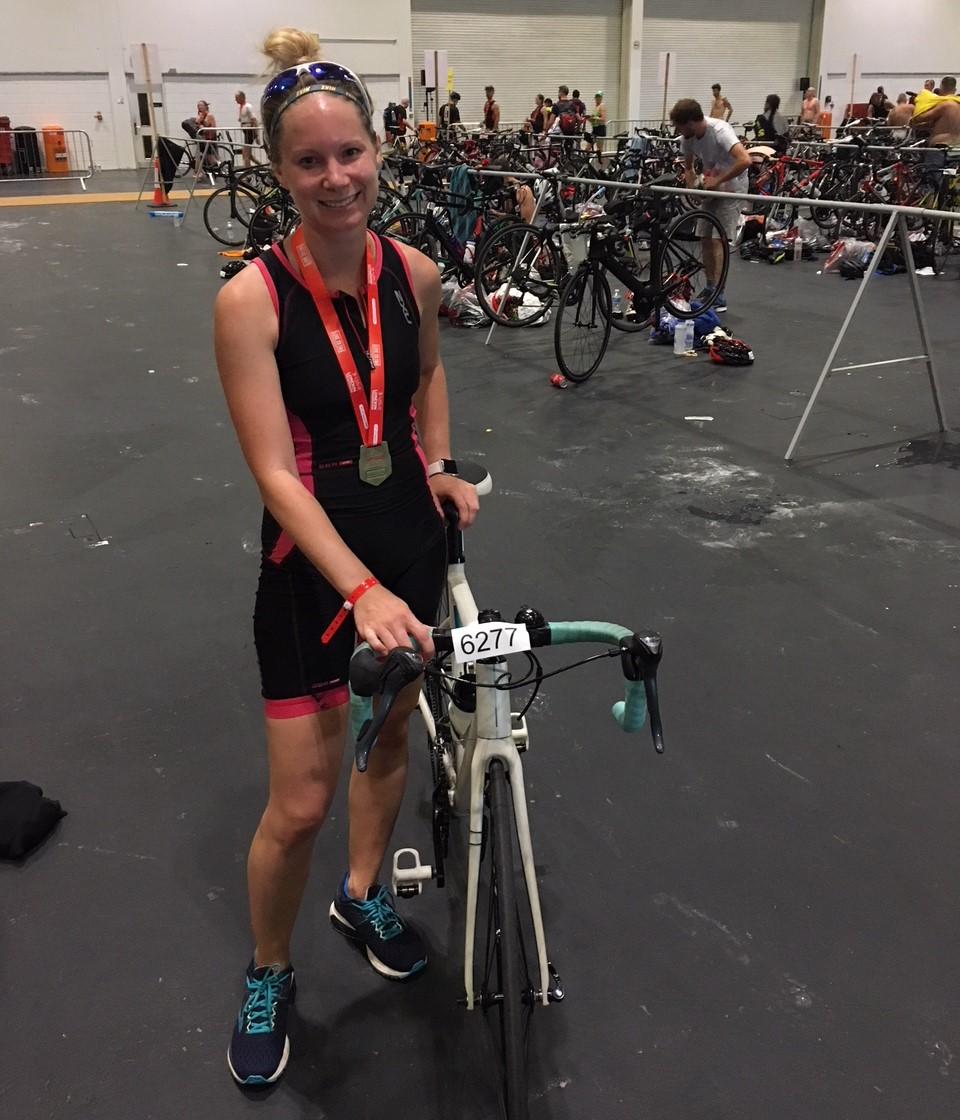 However, when I received the text message with my time, I must admit that I was pleasantly surprised that it wasn’t far worse. I didn’t wear a watch for the swim, or track anything other than the run, so I was imagining a far worse result. 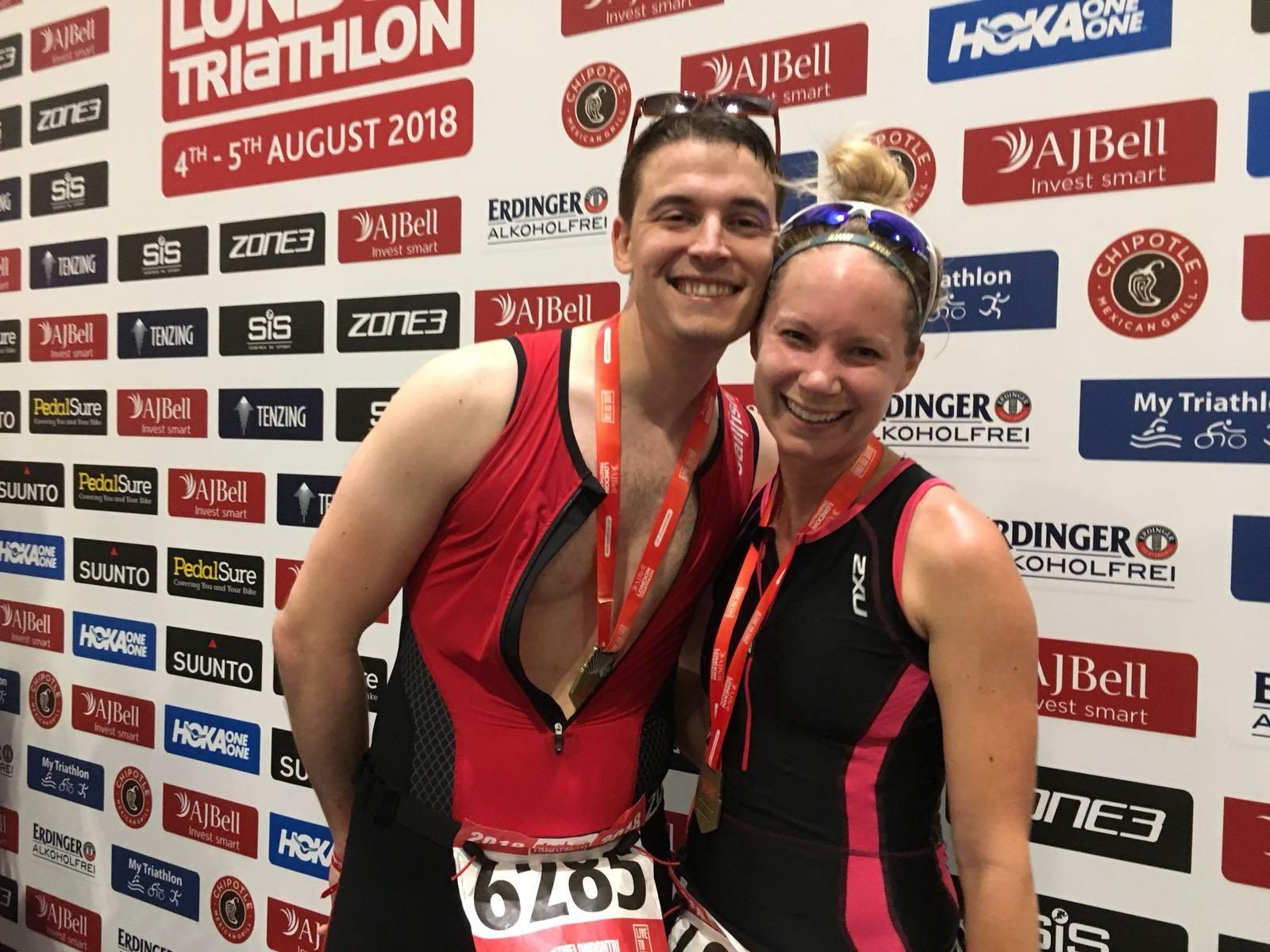 In fact, compared to last year, several of my results are almost the same, or better. Despite falling twice, I actually managed to shave five minutes off my bike time! Imagine if I’d had a good race?! I also placed far better in all categories than last year which was encouraging. 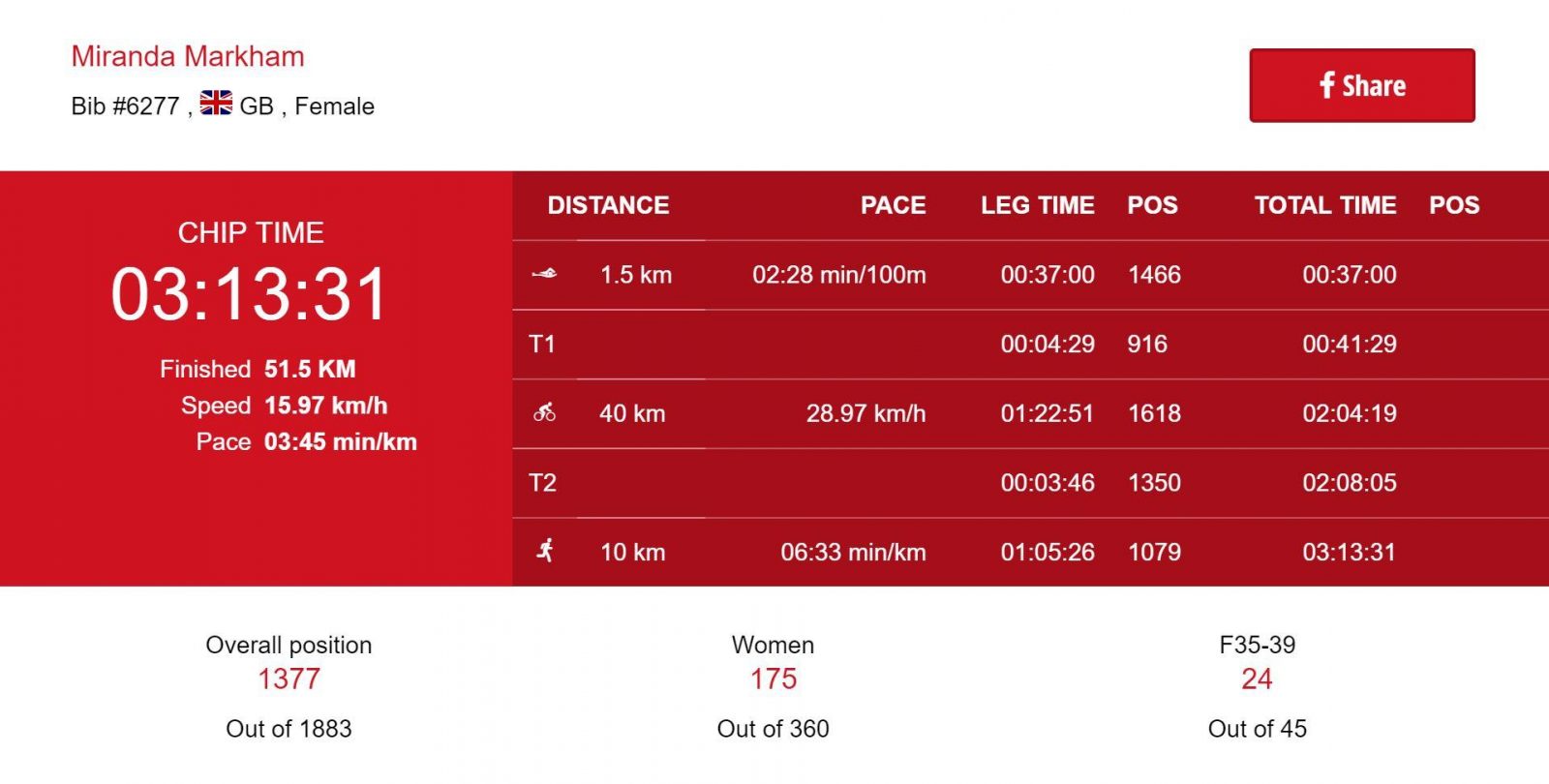 It wasn’t a great race for anyone. Graham and my friends who did it this year also added several minutes onto their times and most people had nothing but war stories following their race. 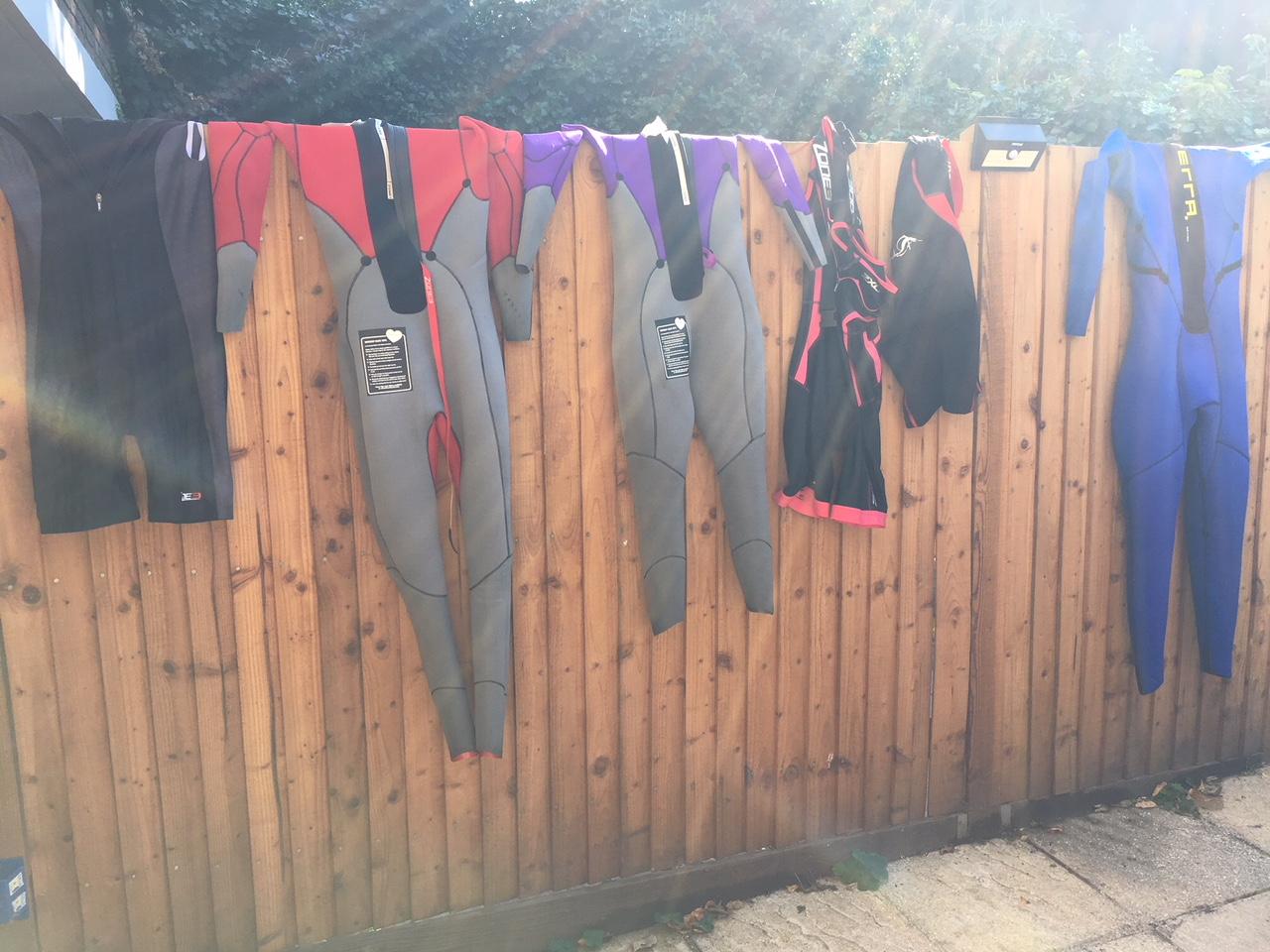 Following a shower, a few beers and some relaxation in the sunshine, I was feeling much better. We had some friends over for a BBQ and celebrated like champions anyway. 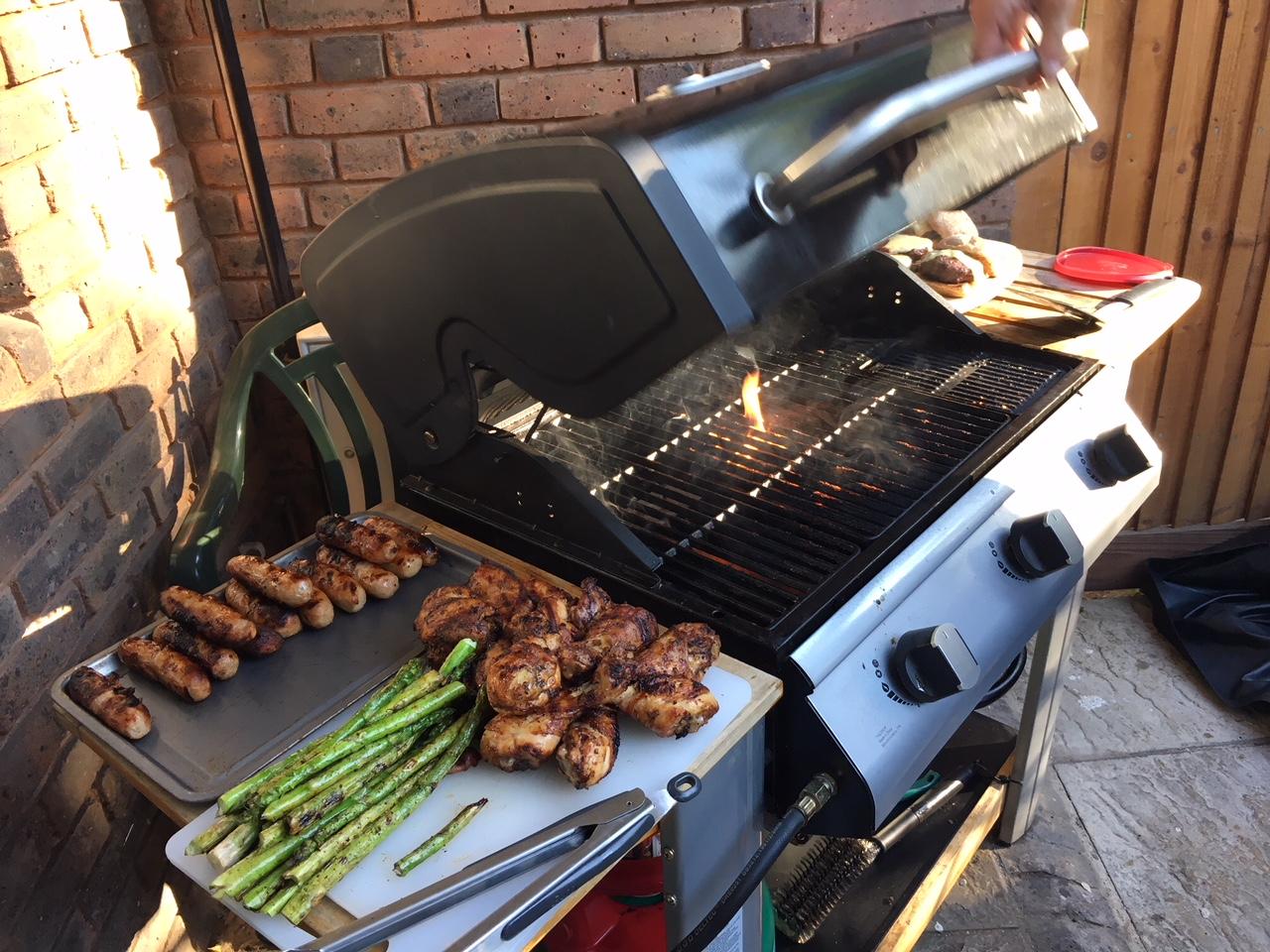 Reflecting on Sunday’s race, I’m still disappointment with my result, but under different circumstances, I know I can do better. While I wasn’t planning another triathlon this year, I feel like I need redemption.

But first, I need to let some bruises heal.

Did you do the London Triathlon? How was your race? I’d love to hear about it!