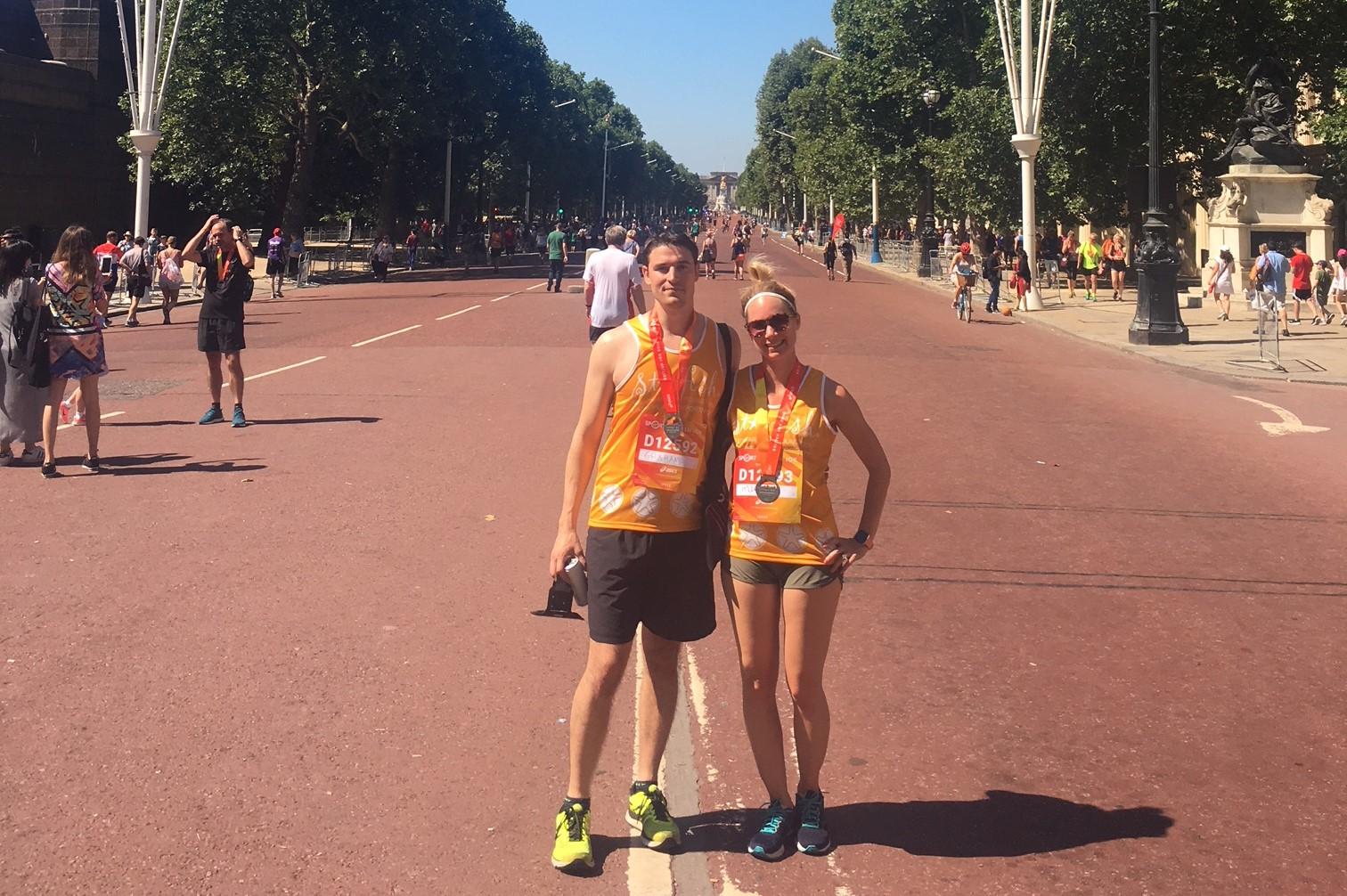 The British 10k was never part of my 2018 race plan. But when a wonderful charity named Starfish Greathearts Foundation offered Graham and me places, long after the race was sold out, we couldn’t say no.

We actually ran the British 10k race five years ago, on the way back to Canada after our honeymoon in the South of France. We ran around the historic landmarks of London, long before we ever dreamed of living here. We also ran in an unusual heat wave in 2013 and as a result, I blew up. Literally walked parts of the course and completely lost sight of the fact that we were running in LONDON! It marked a personal worst for me for 10k and I was grumpy and mad at the whole experience.

But redemption was in sight. And, as luck would have it, Mother Nature decided to throw some 30C heat and blue skies at us, just for a like-for-like comparison to the 2013 race.

My original plan was to actually race this event. I’ve been training hard for the upcoming London Triathlon so I thought something around 51 minutes or better was in the realm of possibility. With the heat, I lowered my expectations substantially. I’d have to just do whatever my body would let me and be happy with that.

Because it was so hot, we didn’t need to check a bag. I usually bring a change of clothes so I don’t get cold. That wasn’t necessary this time. We got to the start line with plenty of time, and our starting pen was literally right outside Green Park station. Barely any walking! 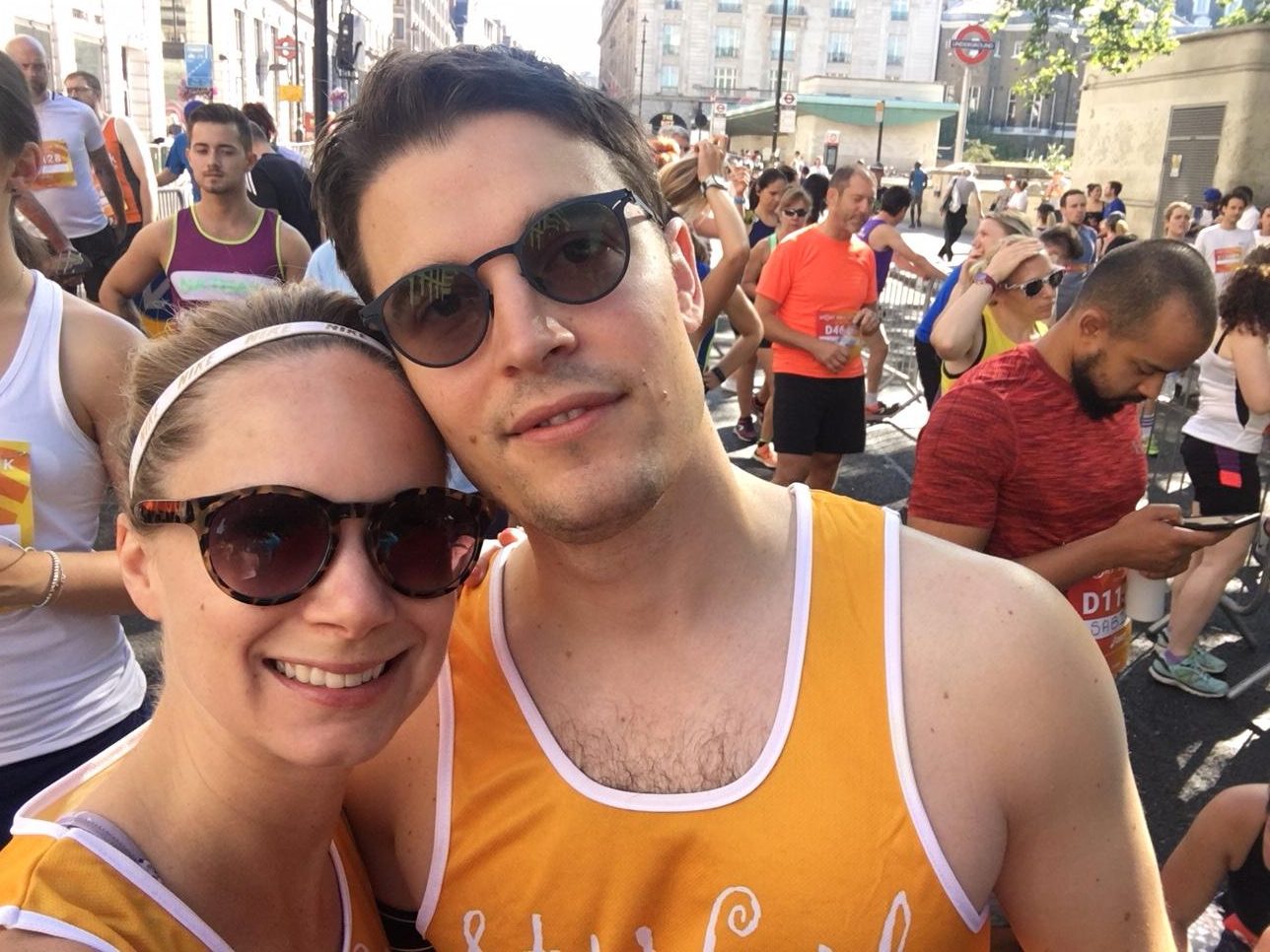 On the way in, I saw Paul Addicott, the 2nd place winner at The Running Awards. He was pacing the 45 minute runners. I joked that I’d be about 10 minutes behind him. Graham is doing his Executive MBA at the London Business School and we bumped into one of Graham’s classmates! In a race of more than 11,000 people, that was pretty lucky! 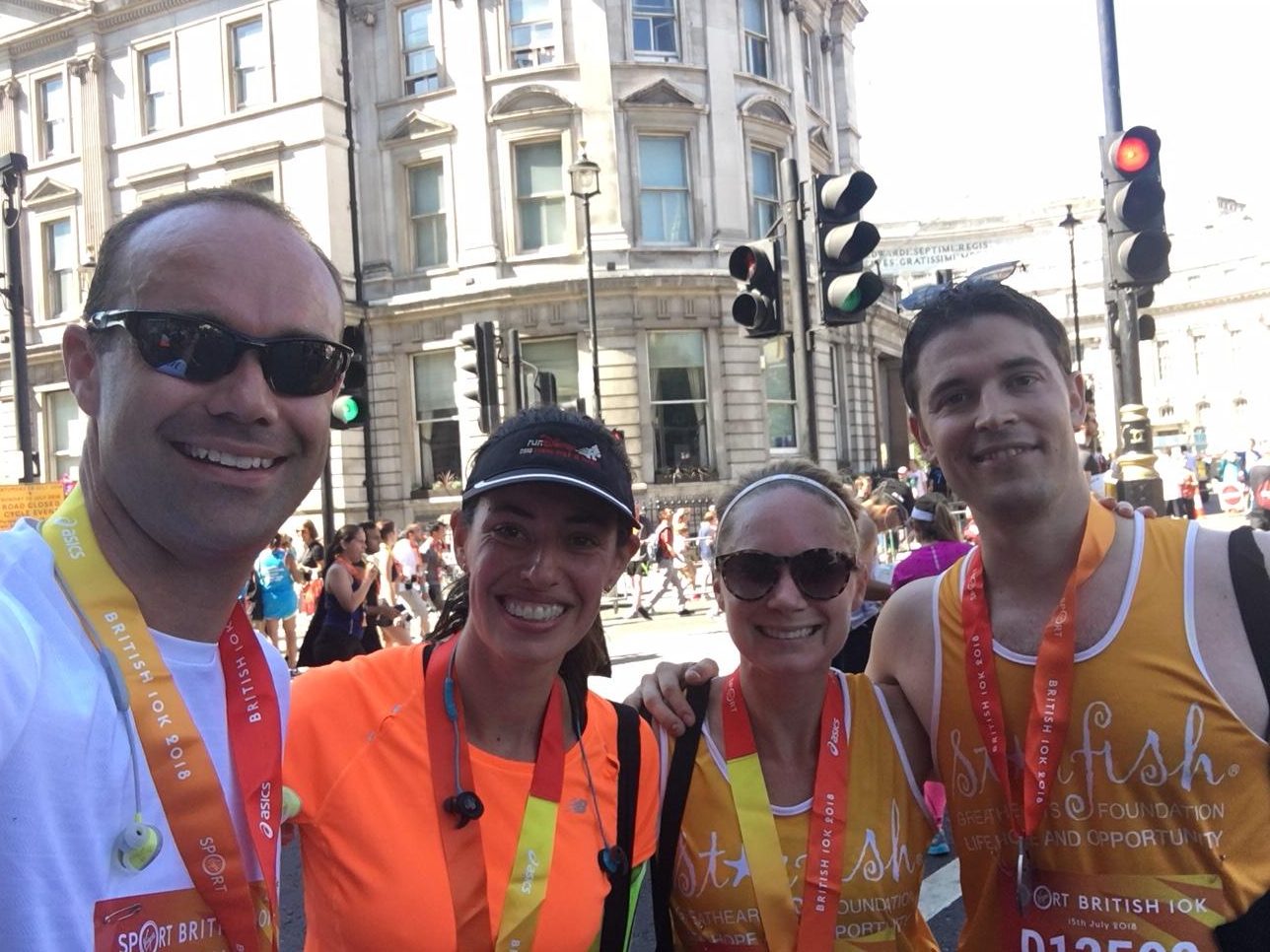 We settled into the starting pen and did the warm up. Graham and I made a last-minute decision to dash to the toilets just as our wave was starting. It proved to be a wise decision. We lost no time at all and it saved a rather uncomfortable run for both of us. 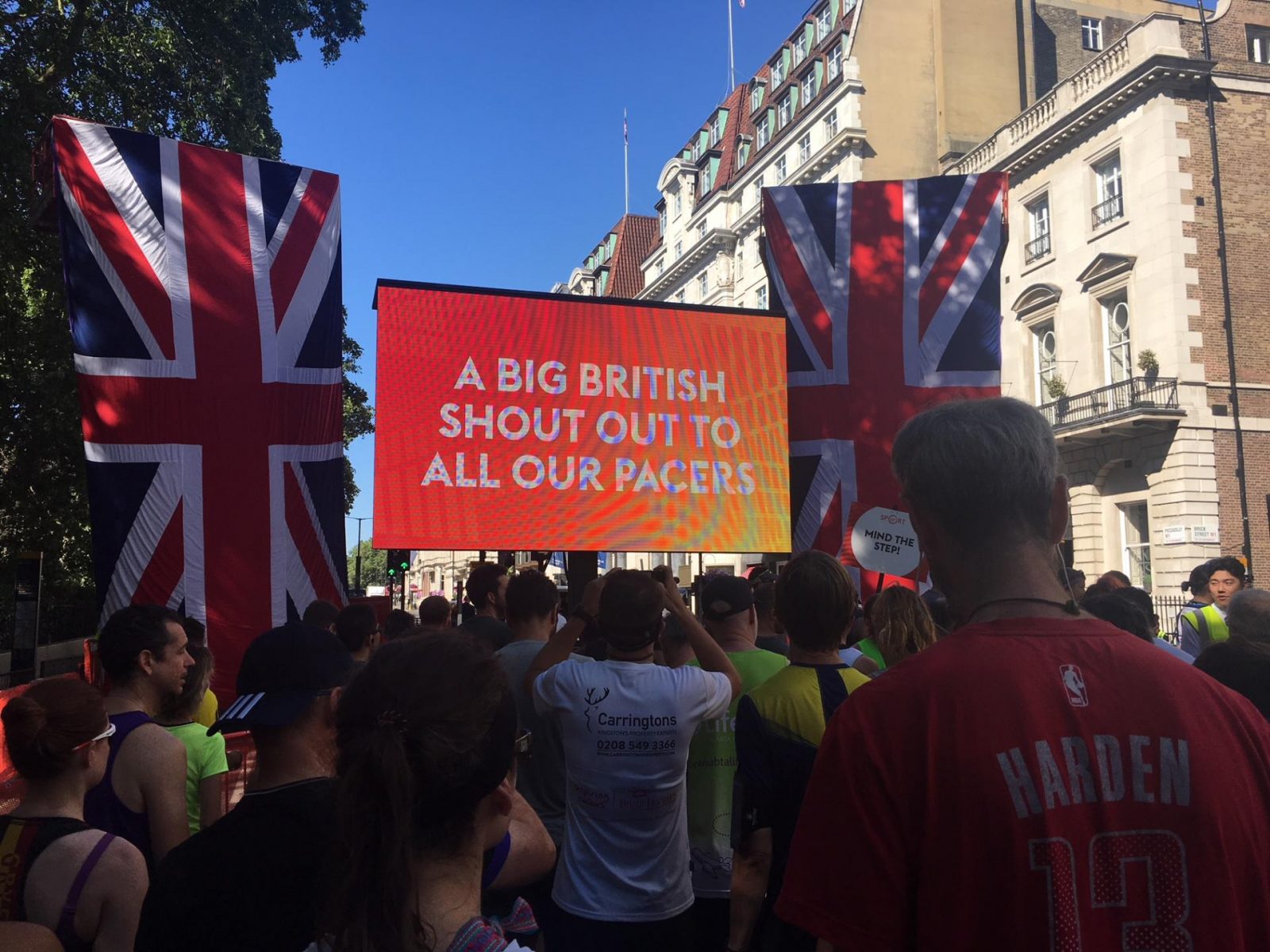 The course involves a lot of out and backs with tight corners. Some people don’t like this because the tight corners costs you time, but with my new (far more sensible!) race plan in place, I didn’t mind that much. I also liked going by the major sights and on-course entertainment twice. 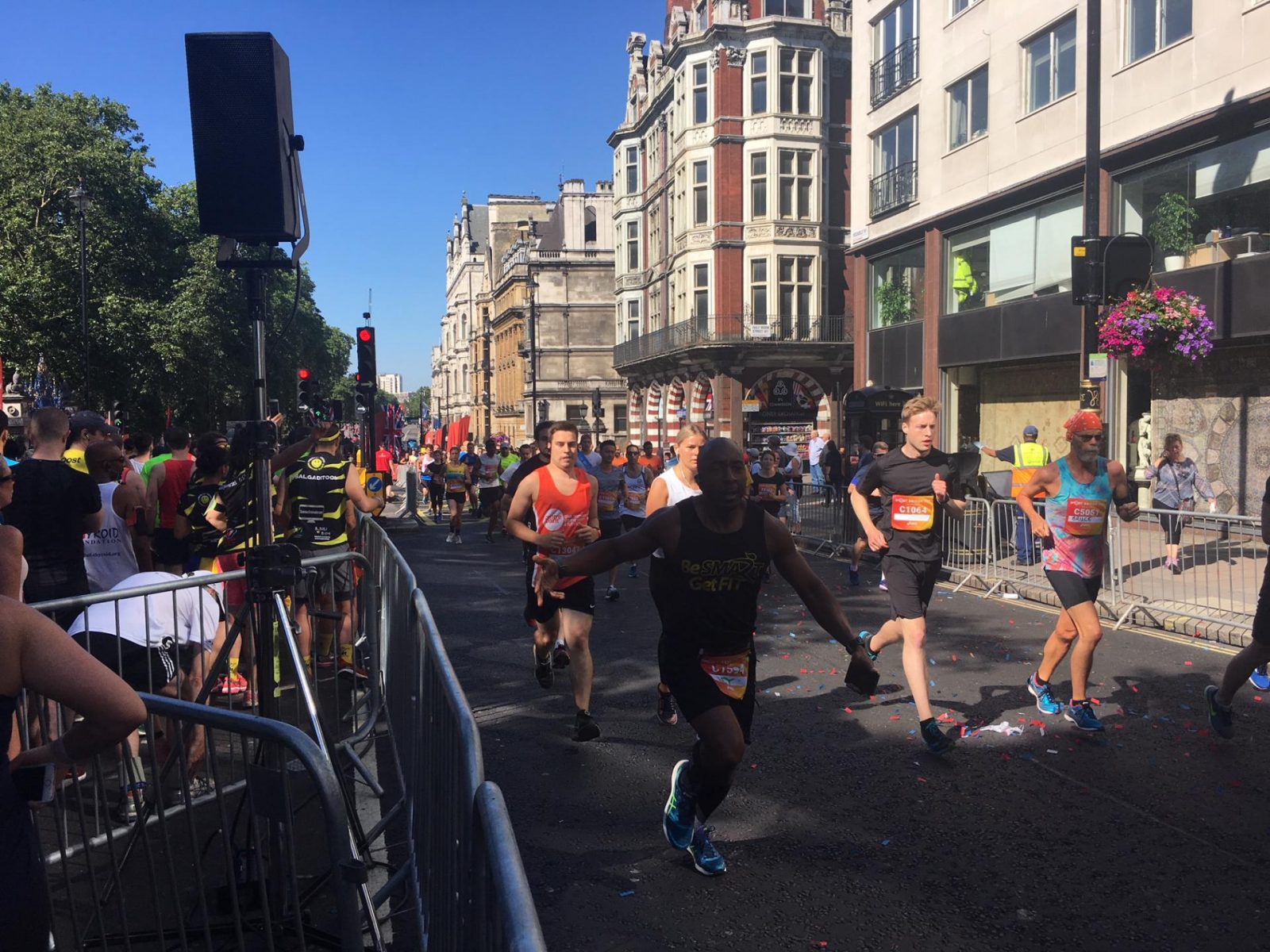 Runners starting the race as we filed toward the start line

It really is a beautiful route. And even though I was slowly melting into a puddle of sweat, I couldn’t help but marvel at how lovely London looks in the sunshine. I even got a bit emotional going through Trafalgar Square. I don’t really know why. Maybe it was the Canadian flags on the Canadian embassy. Maybe it was just a general feeling of graciousness for being able to live in London and for running and for sunshine and for everything good and wonderful in the world. Running really does make me happy. 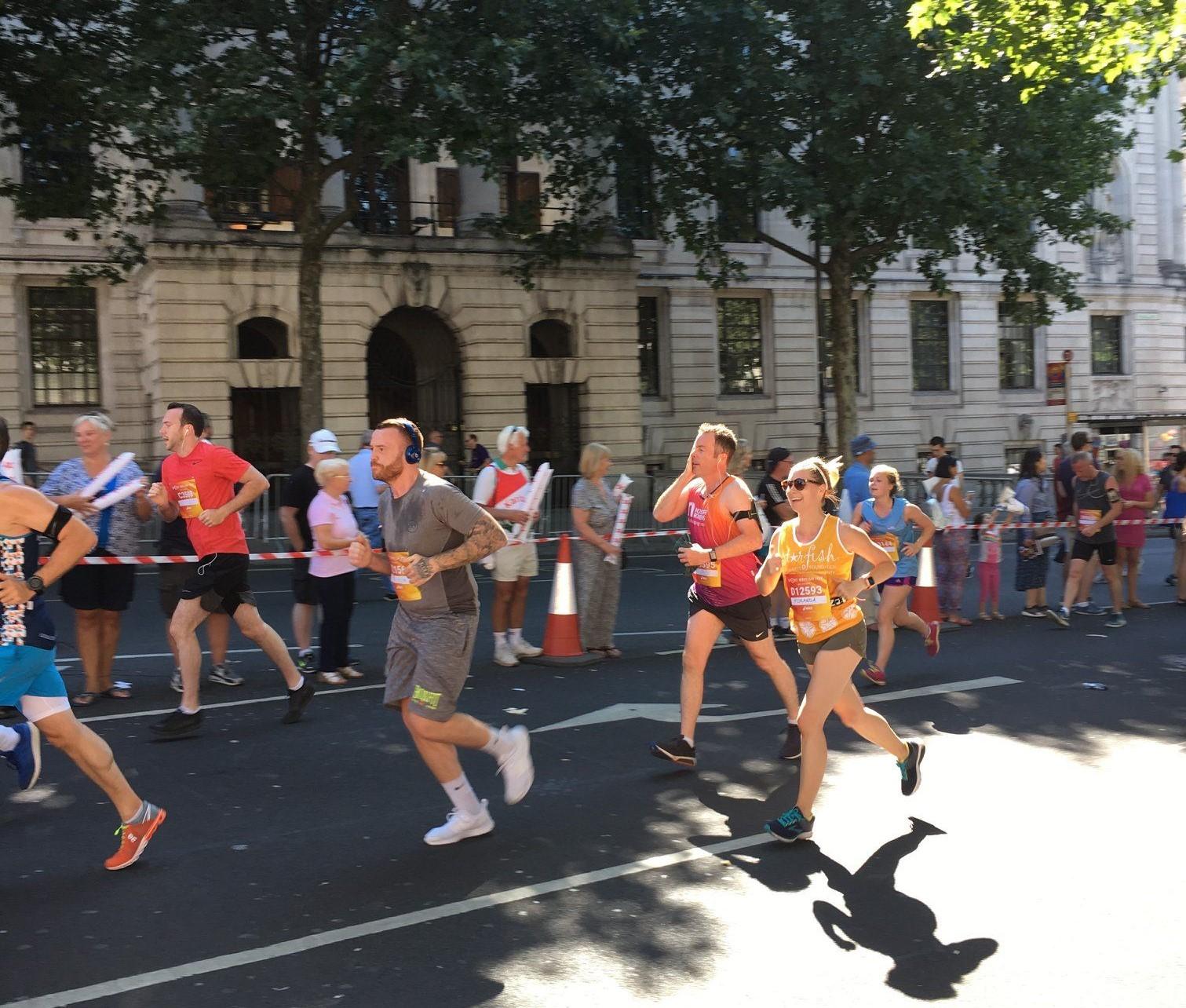 About 3k in (Big thanks to Starfish for the pics!)

Anyway, I was running along at an OK pace for the first half, finishing 5k in 26:57. I had a bit of a low point along Embankment but perked up again after I went through the misting station. I usually avoid these things because I don’t like being wet but it was so very welcome during this race. I’m definitely not one of those people that pour water on their head and down their back. But in this race, I made a rare exception. I perked up as we crossed the bridge. It’s a shame Big Ben is covered in scaffolding. It would have looked so majestic. I knew the finish line was near. 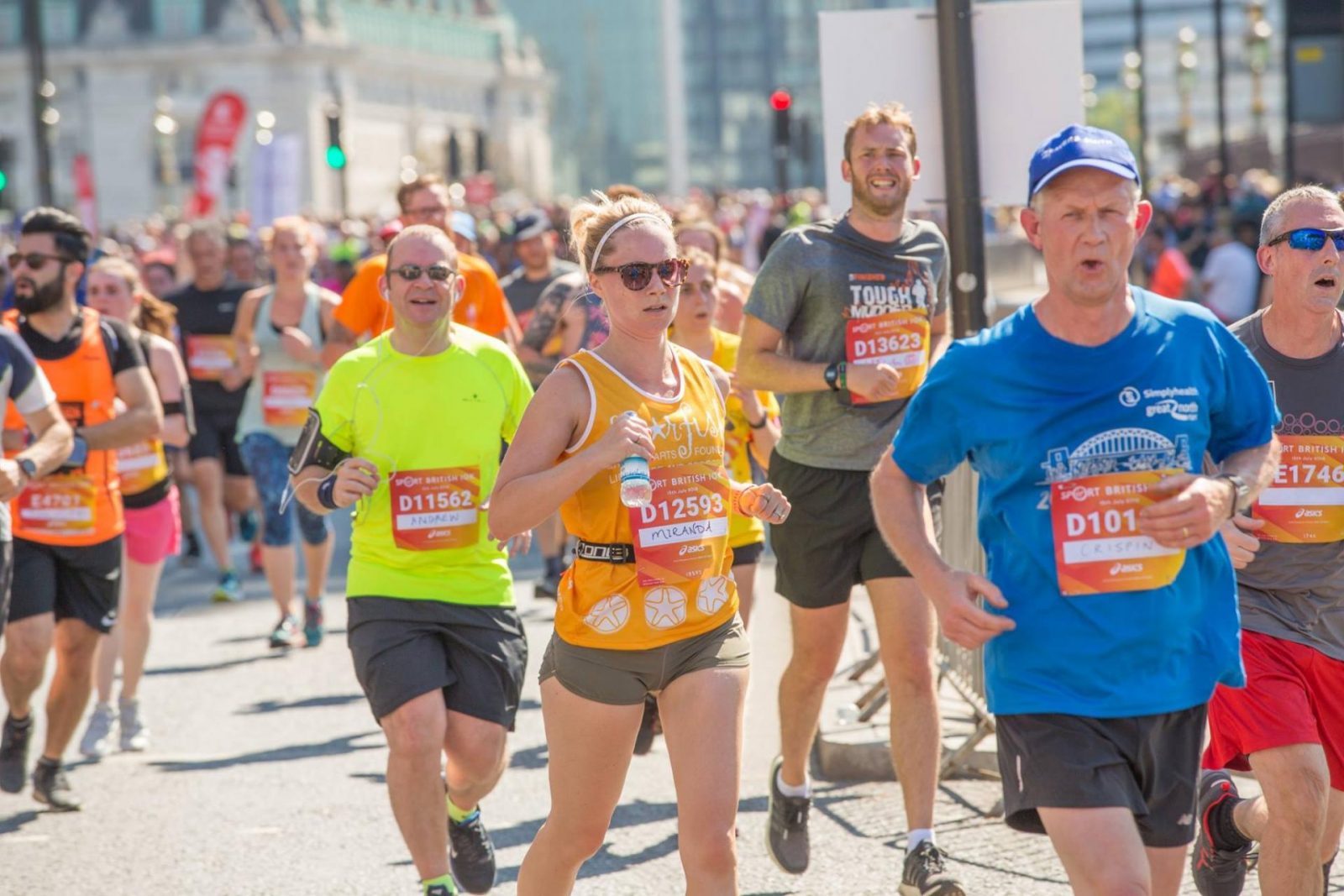 In the last kilometre, I could have really used some guidance in terms of how many metres were left to go because I started running a faster pace way too soon. But I kept it going. It did involve some grunts and groans. 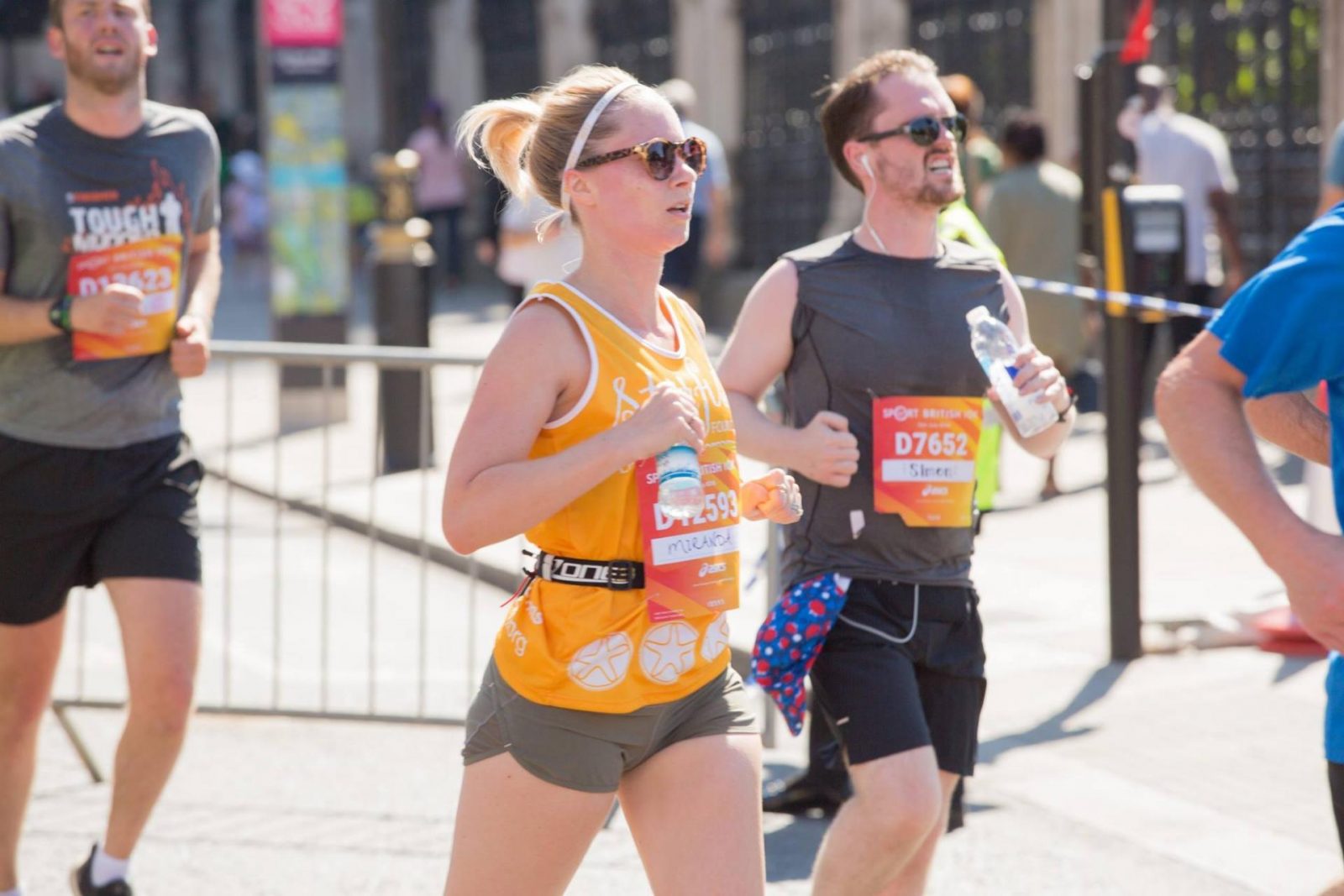 I crossed the line in 54:28. An overall average race pace of 5:27km/hour. Certainly not a personal best, but not hideous either. 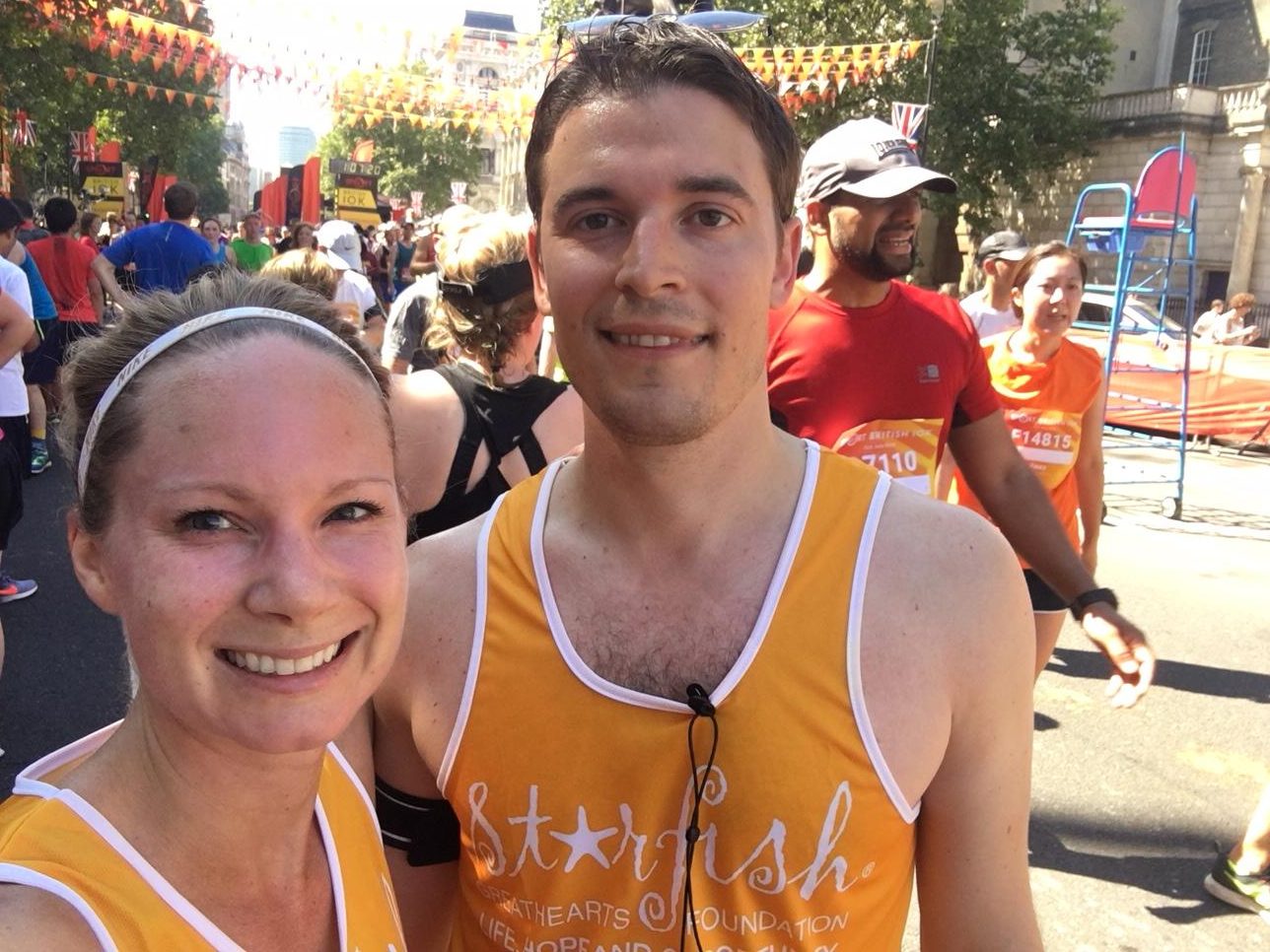 Just after the finish line. My face is a bit red!

Here’s a fun fact. There were three Mirandas in the British 10k. I was the slowest Miranda BY ONE SECOND! How annoying! Also, how odd that two of the three Mirandas running the race finished literally beside each other! What are the chances? 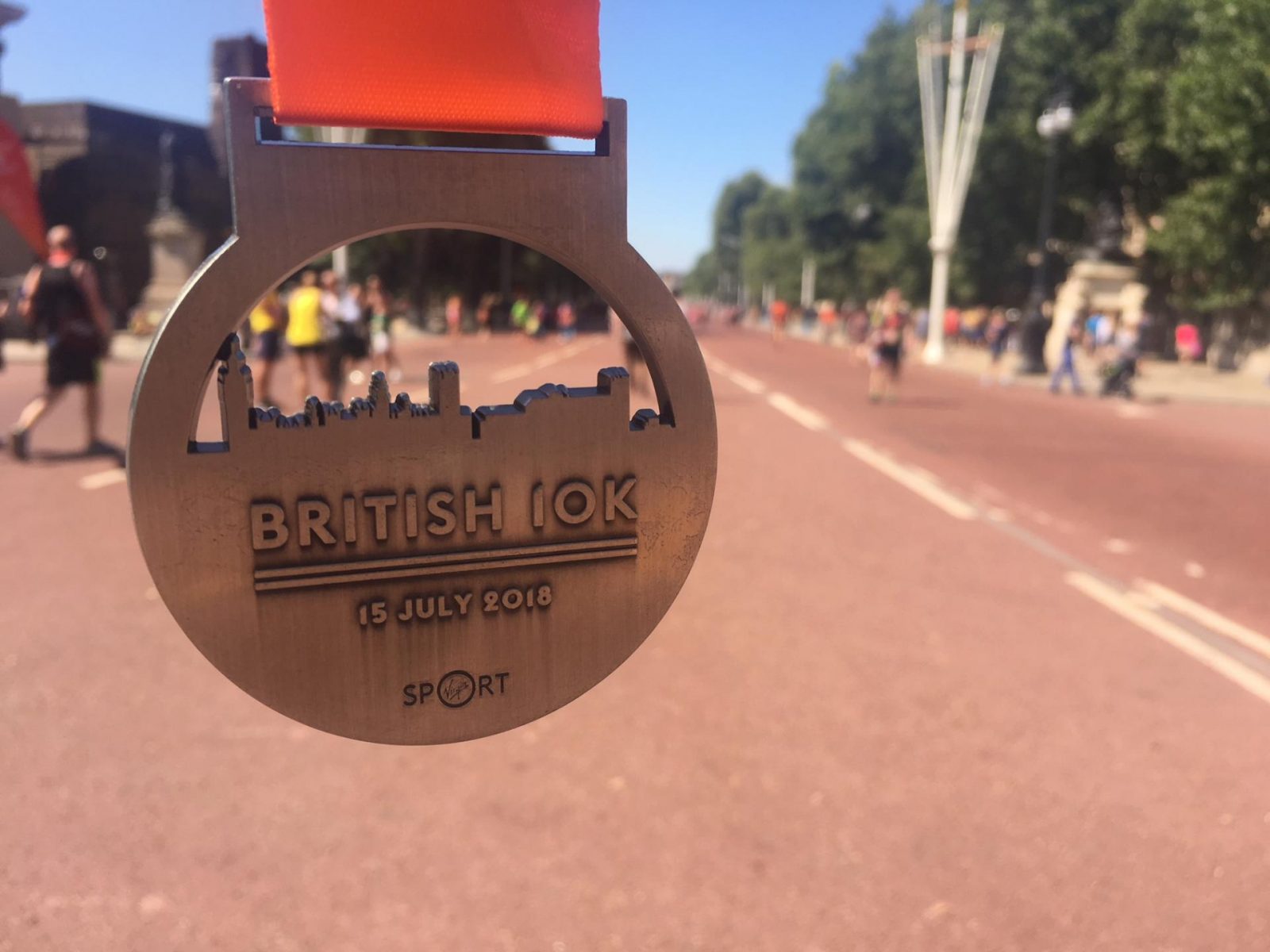 Overall, it was a great race. Well organised with great logistics. I also REALLY loved the fact that they had canned water available at the start and finish line. I always get a bit distressed about the insane plastic bottle waste at races and this was really nice to see. While there were plastic bottles used on the route, this was still a step in the right direction. 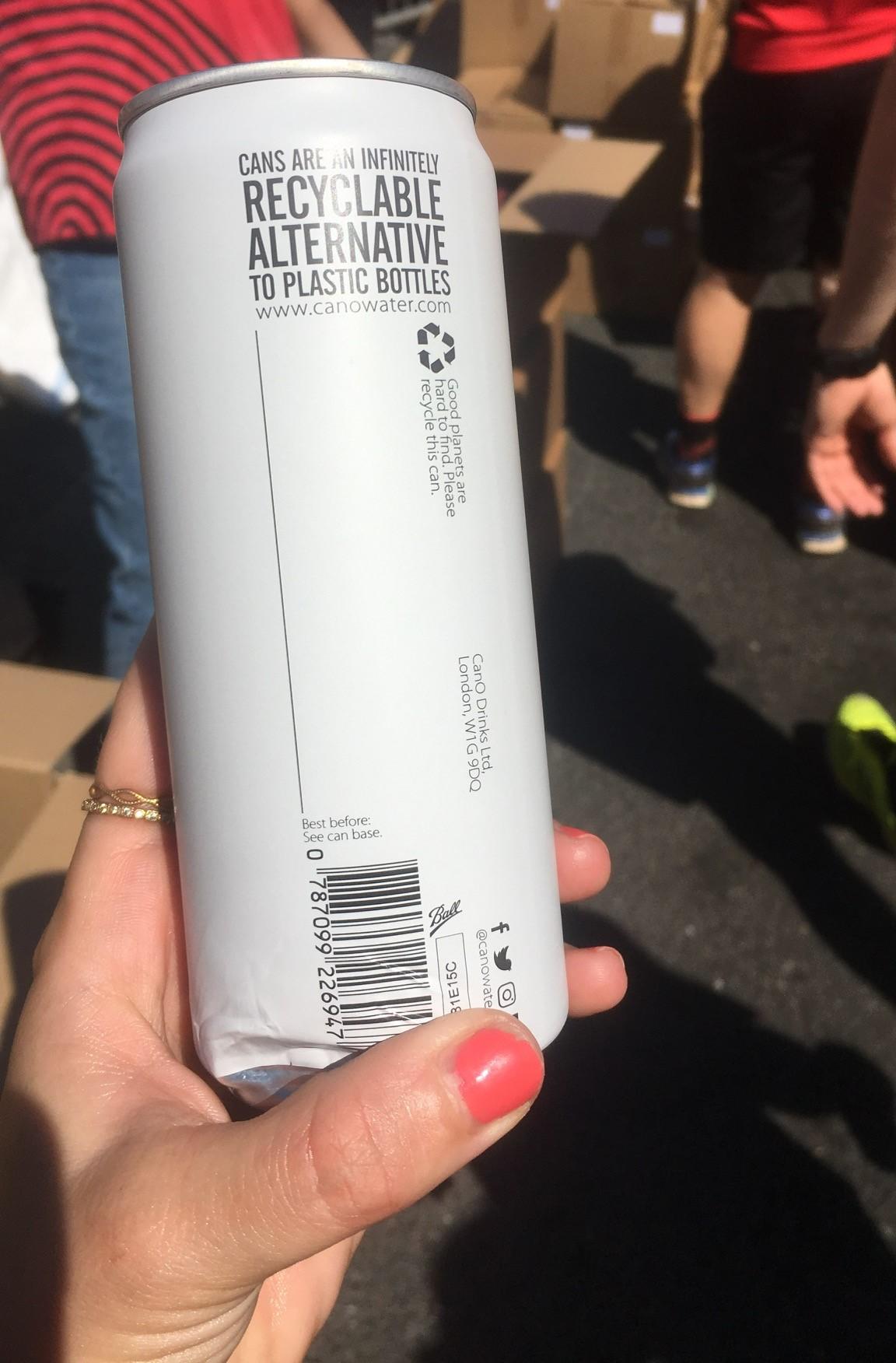 A big giant thank you to Starfish for the charity places. We wore our sunny, bright yellow vests with pride. We are so close to raising our fundraising goal of £200. We would be so gracious if you were feeling generous and wanted to help us finish it off? I mean, Graham ran in 30C heat with a hangover. Surely, that’s worth a few £££?

You can find our JustGiving page here: https://www.justgiving.com/fundraising/markhams

Also, if anyone is interested in running the Royal Parks Half Marathon for Starfish Greathearts,  let me know. There are charity places available! 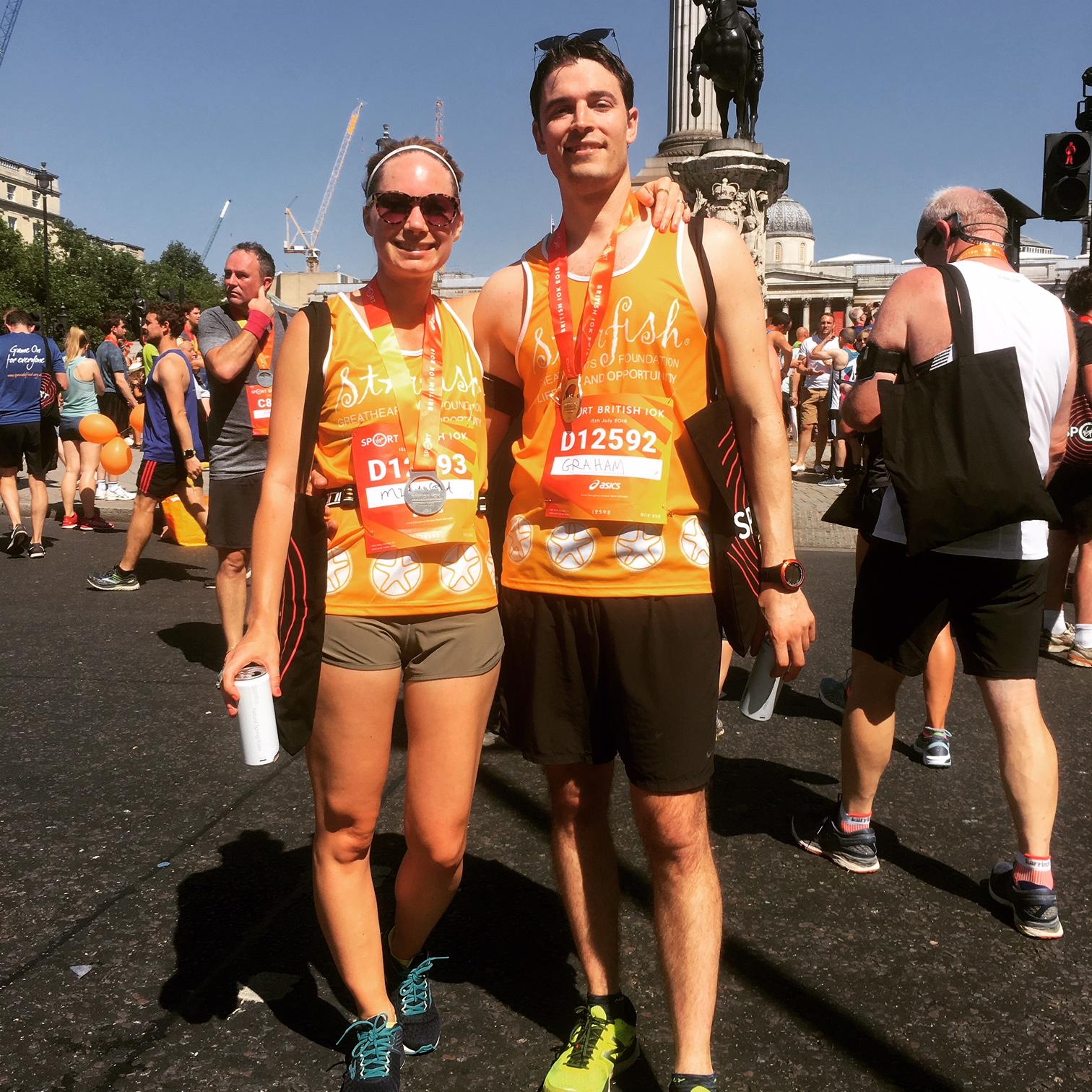