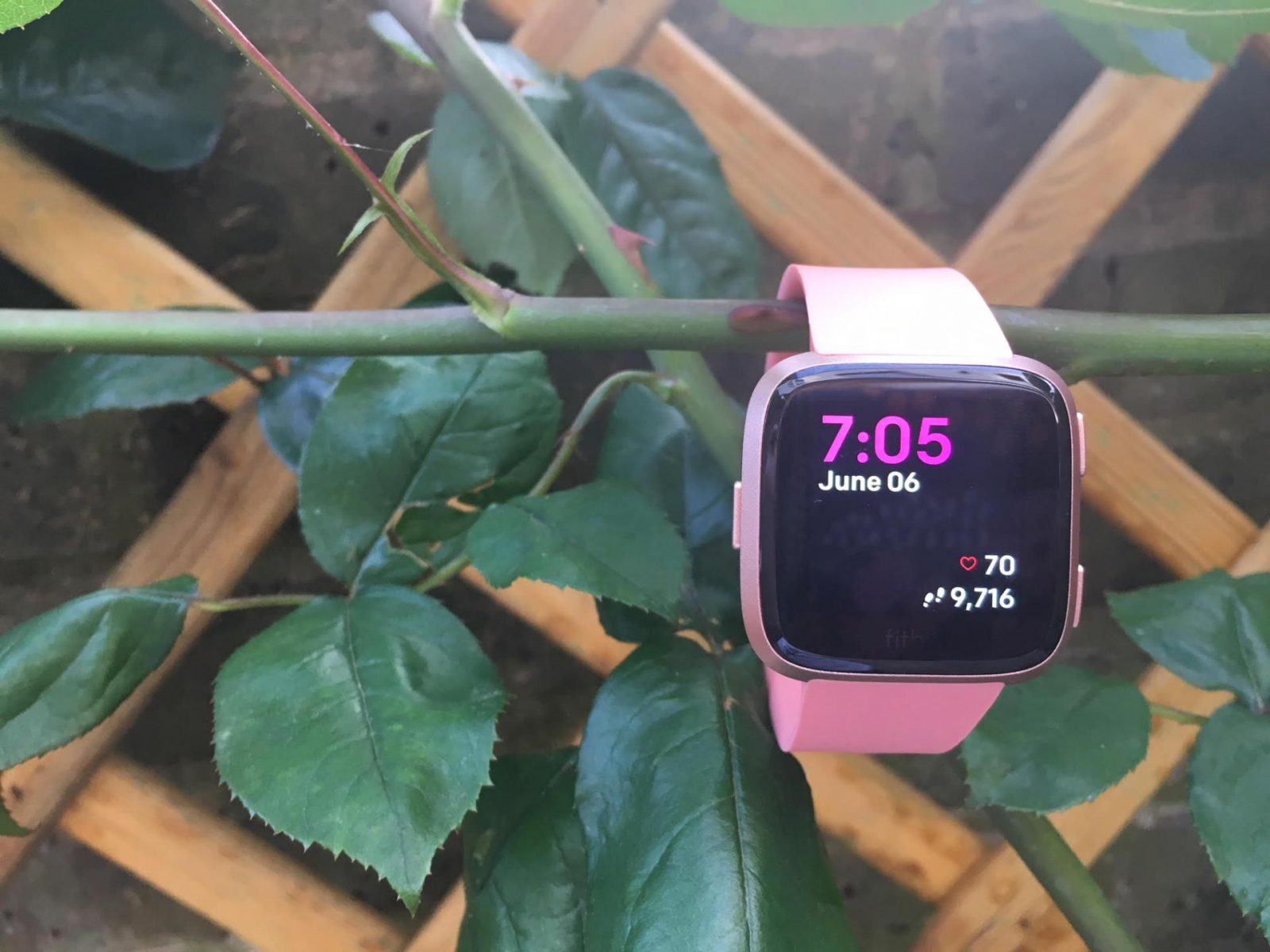 In 2016, I received the new Apple Smartwatch for my birthday. I was so excited for the built-in Nike Run Club integration and couldn’t wait to have smartwatch and fitness tracking device all-in-one. Unfortunately, the watch hasn’t really lived up to the hype for me. Not only does it freeze continuously while running the Nike app, the battery life lasts barely 12 hours, and all the fitness tracking data is basic at best. The watch has disappointed me in some of my most important races, including last year’s Geneva Marathon where tracking my time and pace was critically important to me. I mean, it’s cool that I can answer calls on it, but for the things that matter to me, it has really let me down. It is very much a Smartwatch first. Fitness tracker second.

Recently, when Curry’s reached out to me to ask if I’d like to try the new Fitbit Versa, I couldn’t say yes fast enough. After a few weeks of testing it out, I can say unequivocally that I like it better. It has basically not left my wrist since I set it up. Even to sleep. Here’s why. 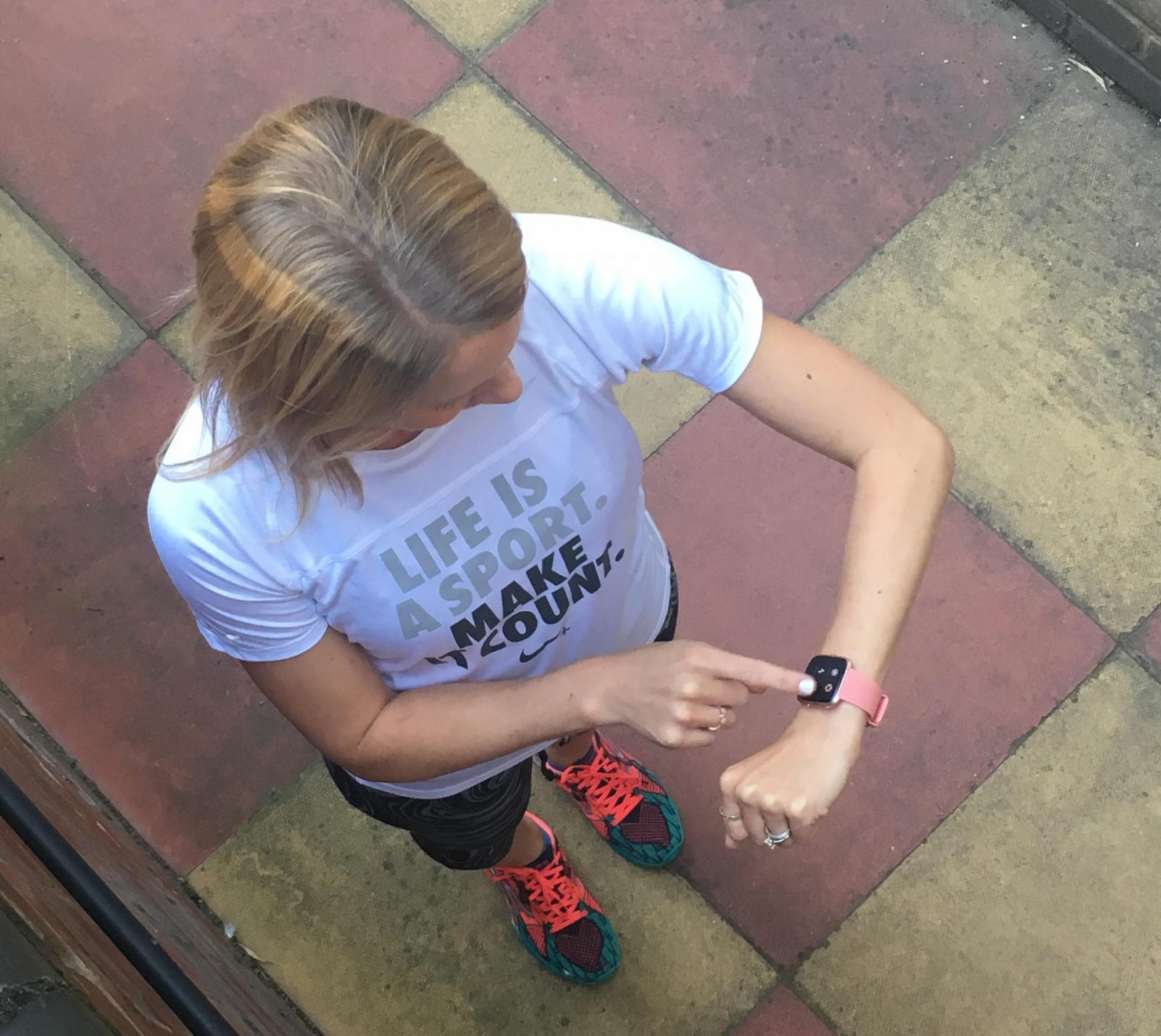 I hate setting up new products. As a result, the lovely Fitbit sat in its box for a week before I finally opened it up. I just hate the tedium of inputting data and downloading apps. Thankfully, this setup was about as painless as it gets. In less than 10 minutes, I was ready to go. Just download an app and input some numbers and boom. Done. The longest part of the setup was picking which watch face I wanted (of which there are literally hundreds!) 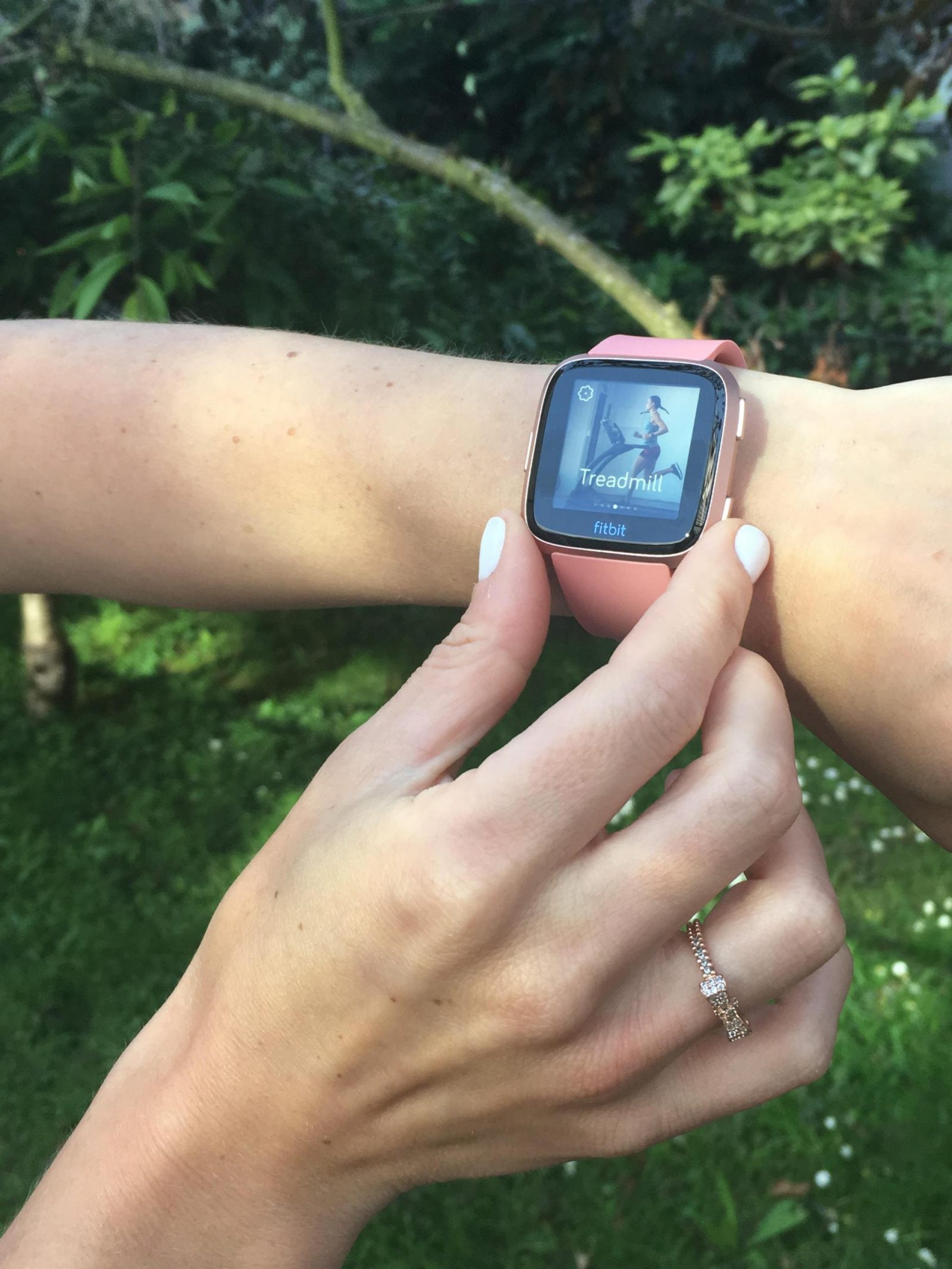 It’s a lovely looking watch, isn’t it? And delightfully Curry’s gifted me the rose gold watch face with a pink band. I didn’t even as for this combo but it’s so perfectly me. The interface is easy to navigate and the title screens for the different exercise are beautifully high res. I’m still tinkering with some settings that I can’t quite get right, but everything is totally customisable which is nice.

They said the watch can last four days. I refused to believe it. However, I can confirm it does indeed last four full days, even with running a few of the exercise apps and tracking a great amount of exercise. I charged the watch on Thursday morning , wore the watch all weekend including a climb up Ben Nevis (where we racked up more than 15 miles and 450 floors) and didn’t charge it again until Sunday night and it was still at 28%! 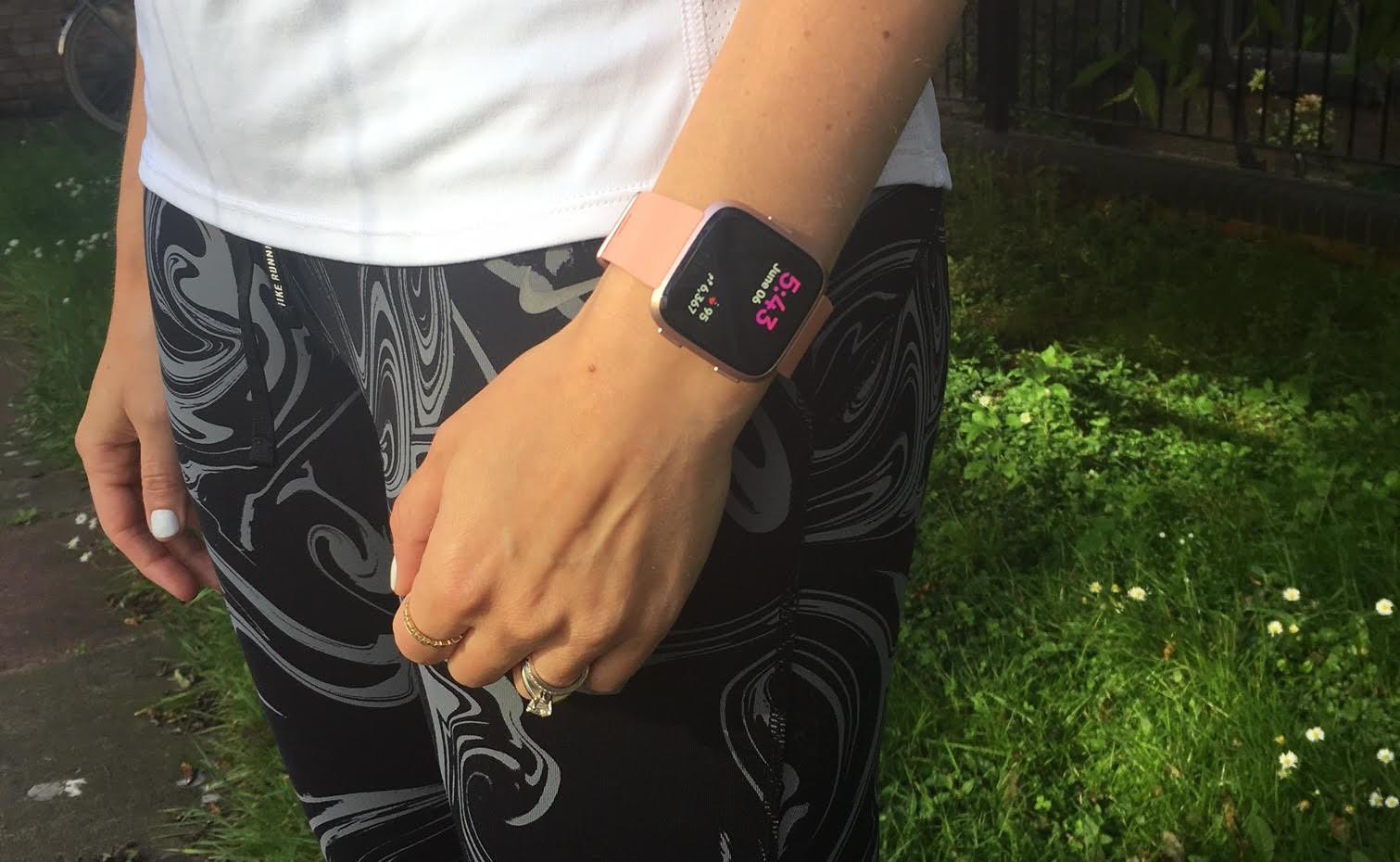 Here’s where the Fitbit Versa really wormed its way into my heart. The watch has built-in fitness tracking for running, biking, swimming, treadmill, weights, an interval timer and a generic workout option. Not surprisingly, I used the running app the most and was pleased with the results. Pace, distance and split times all seemed accurate and it was super responsive and easy to start and stop. Once, in a HIIT class, we did a bunch of treadmill running and it automatically detected my run and tracked it! 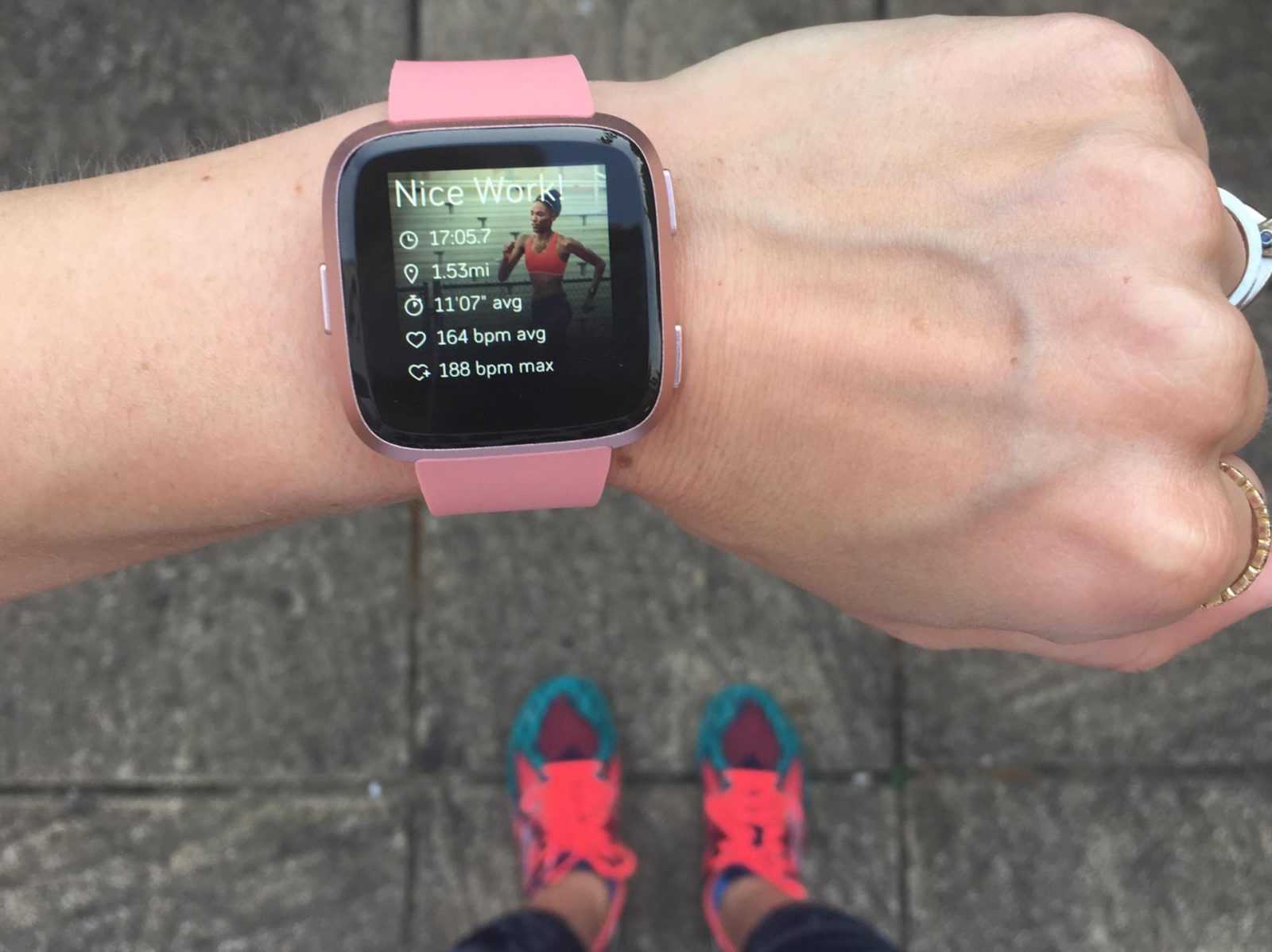 The watch tracks steps but it also tells you overall distance travelled, calories burned, floors climbed and number of minutes exercised – all at a glance. There is also a huge amount of daily data tracked in the app so you can start looking at weekly comparisons, really getting some interesting insight into your overall fitness.

The swimming function also impressed me. With no external speaker like the Apple Watch, I’m less worried about some sort of water-related malfunction. This is an especially useful feature considering my upcoming triathlon. 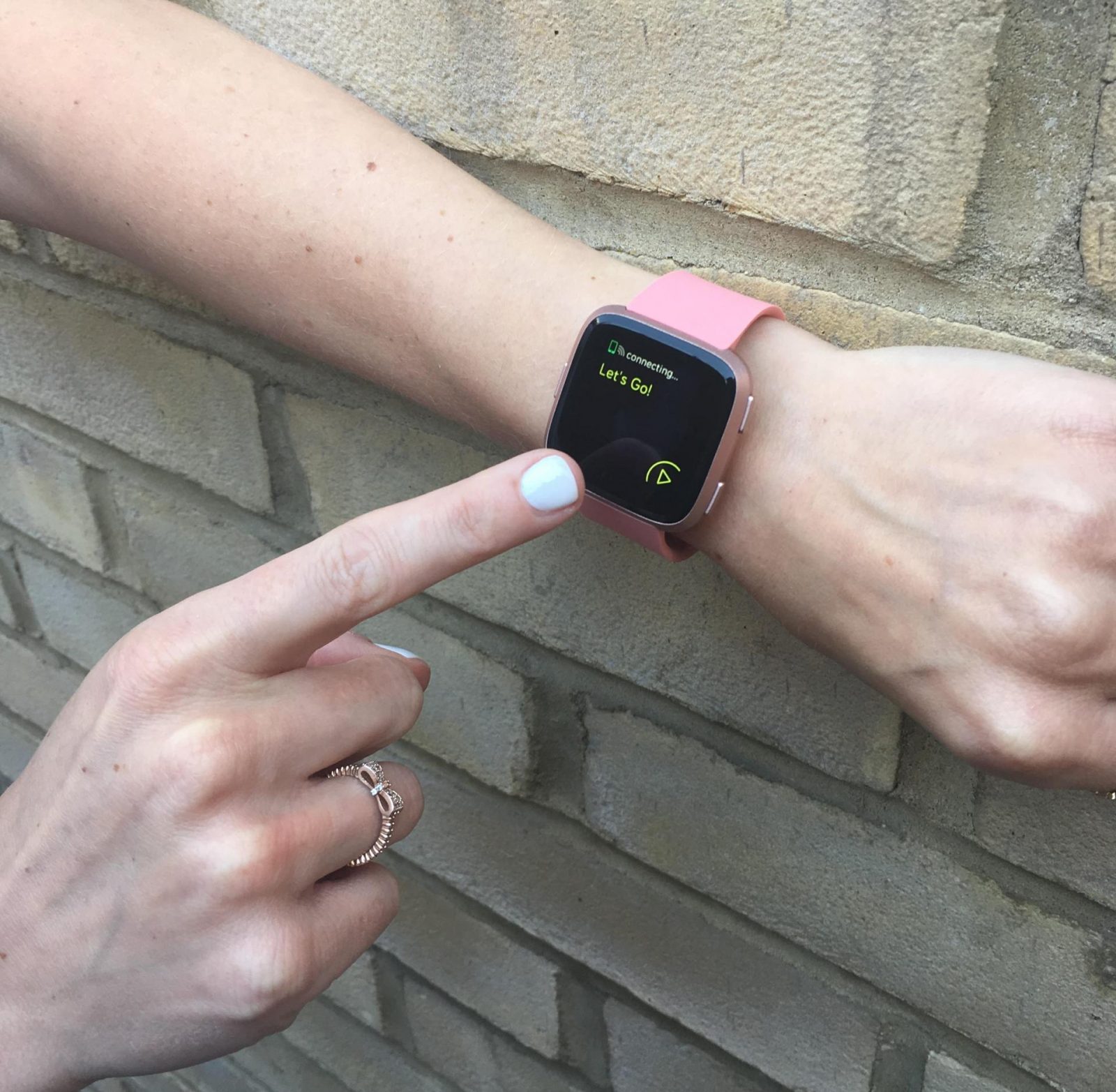 I never wore my Apple Watch at night. This was mainly because the battery was dead by end of day and I needed to use the night time to charge it. But with the Fitbit Versa’s monstrous battery life, I can now track my sleep cycles with alarming accuracy. I’ve learned that I get about 8 hours of sleep per night, with 1.5-2 hours in deep sleep, which is average for an adult. It’s interesting to see how poorer quality sleep impacts my performance at an early morning gym session too – data I never had with the Apple Watch. 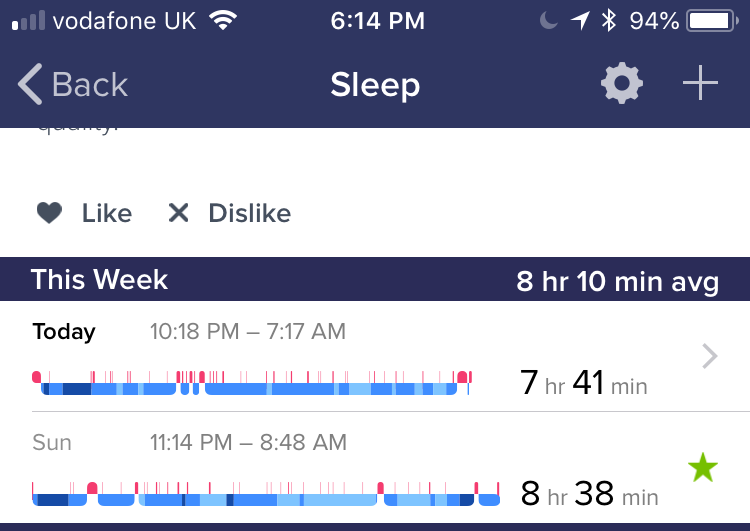 Like the Apple Watch, The Fitbit Versa displays meeting reminders and text messages on your watch. This is a handy function. It won’t allow you to answer calls though, but this was really just a weird novelty of the Apple Watch. There’s loads of other features I haven’t tried yet, like linking it to Strava and adding playlists. I’ll get around to that eventually. 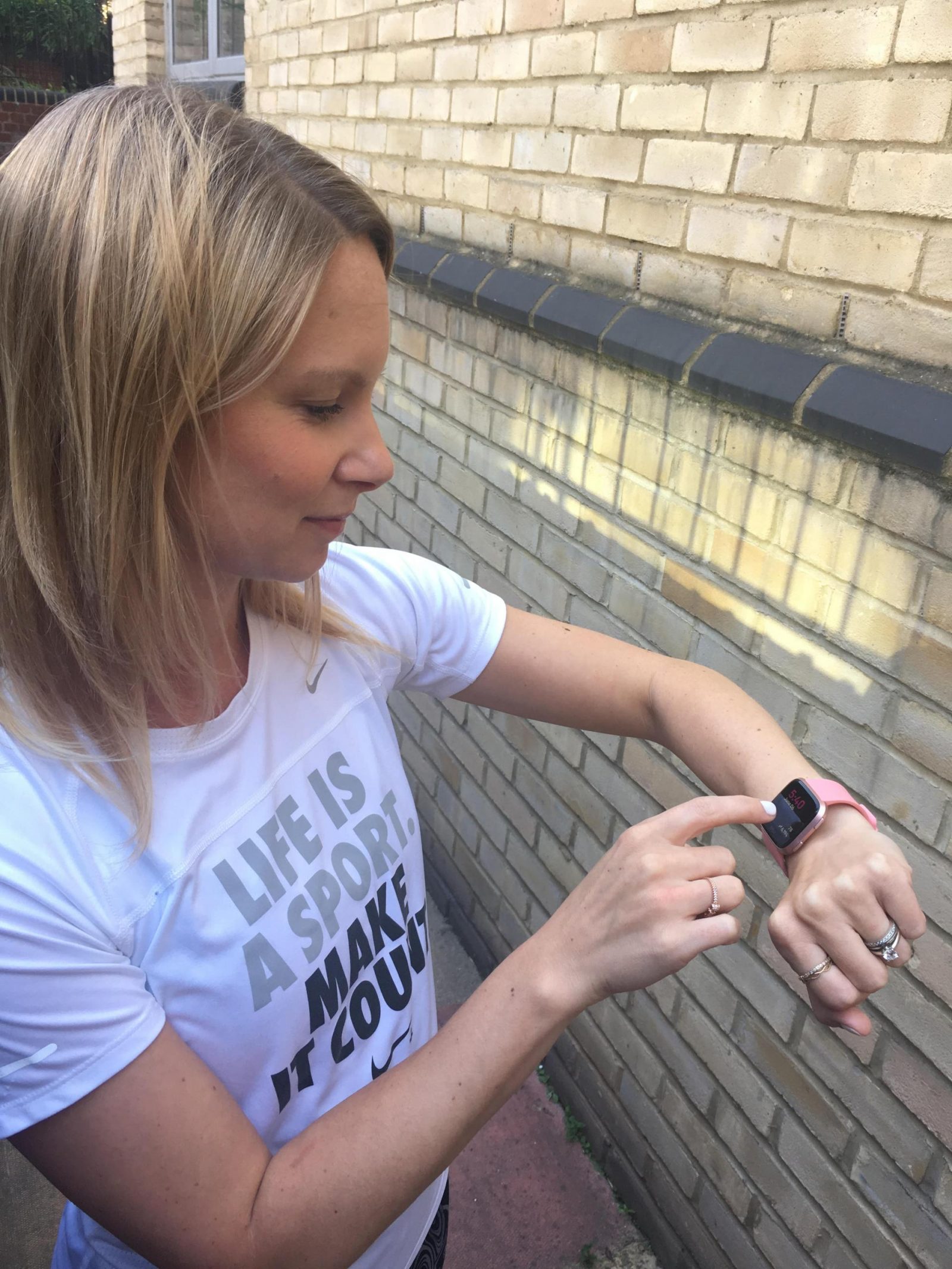 At £199, it’s hard to beat. It’s very much a fitness tracker first, smartwatch second, which is definitely the way I want my watch to be. I’m still a big fan of Apple, but for the things I value in a fitness tracker, Fitbit wins this round.

For more information or to buy the Fitbit Versa, check out Curry’s PC World.

(I received a free Fitbit Versa from Curry’s and in return, I wrote this honest review of the product.)

UPDATE (17 October 2018): After wearing the Fitbit Versa for several months now, I feel like I need to update this post. There have been several things I have discovered about the watch that have made me like it a little bit less than this original, over-the-top positive review. It’s still good, don’t get me wrong. But there are several things that also suck. For example:

So… everything I said above still stands, but there are some definite limitations here. Just good to know in case you’re considering buying this watch. The battery life however, remains one of it’s most impressive features!