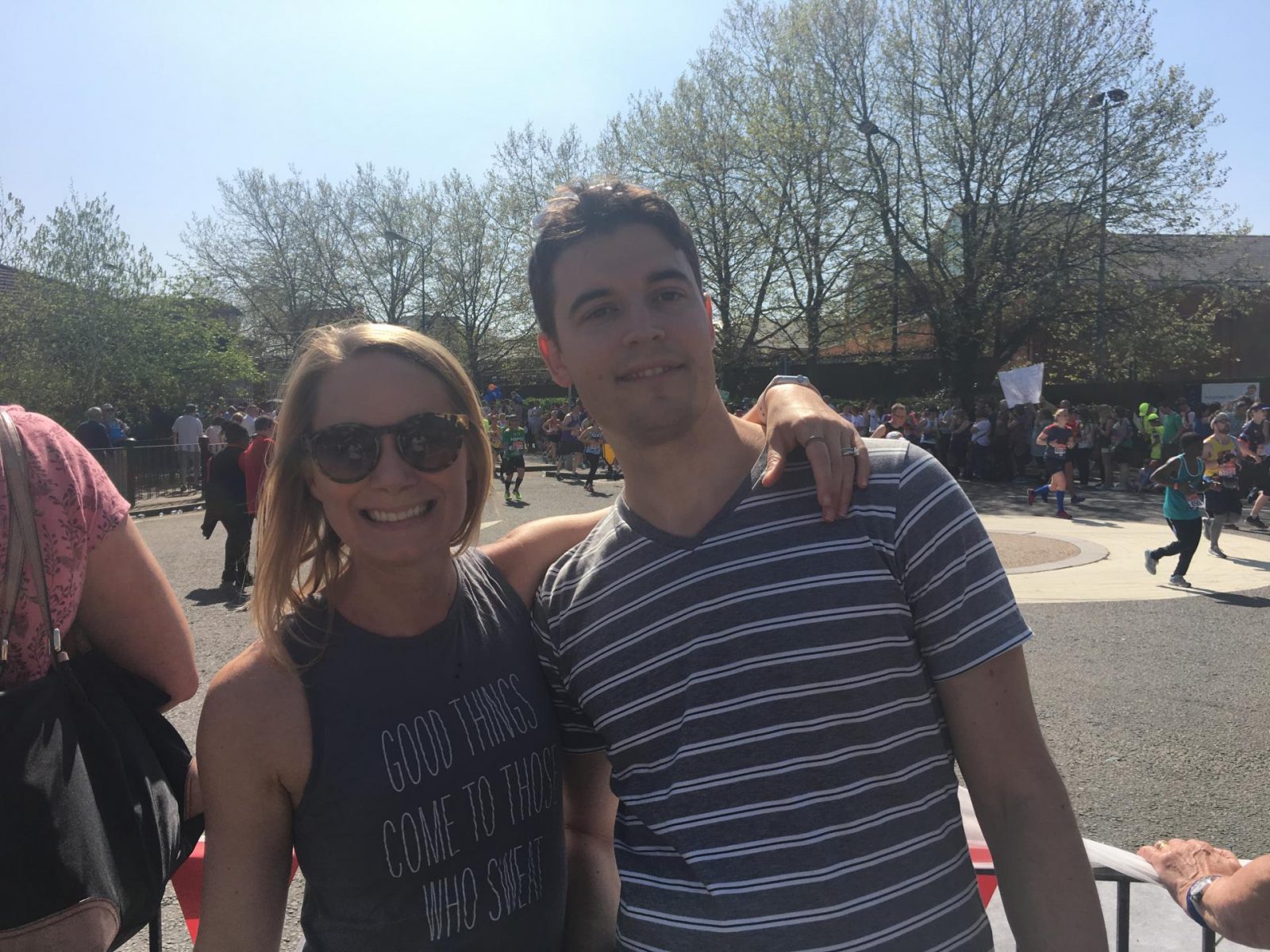 The sun was very nice for spectators…

Good things come to those who sweat. That was what was written across the front of the t shirt I wore to watch the London Marathon yesterday. I couldn’t decide whether it was perfectly appropriate or a little bit evil, given the record-breaking temperatures. At 23C, it was in fact, the highest ever recorded temperature for the London Marathon.

While I have run two marathons in my life, I have never run the London Marathon. I have entered the lottery for three consecutive years and have not yet been successful. I plan to keep trying, especially after yesterday’s experience. What an event! I have heard about how epic the crowds are, but this blew away my expectations! As a runner, I can hardly imagine how it would feel to run this race. The crowd is amazing and it must be such a source of motivation for runners. It could be the difference between quitting and finishing. Sometimes, all you need is a stranger to shout your name to make you move with a little more enthusiasm.

I had several friends running this year’s event and I tracked them all using the London Marathon app. This was one of the best marathon tracking apps I have ever seen! As soon as runners started, you were notified, and their time was updated every 5km, providing a predicted finishing time, and predicted time of day in which they would reach each point along the route.  You could also watch them moving in real-time along the race route. It was critical to find our friends in the sea of humanity. And even with this clever tech, I still missed several people go by! What an exercise in concentration! 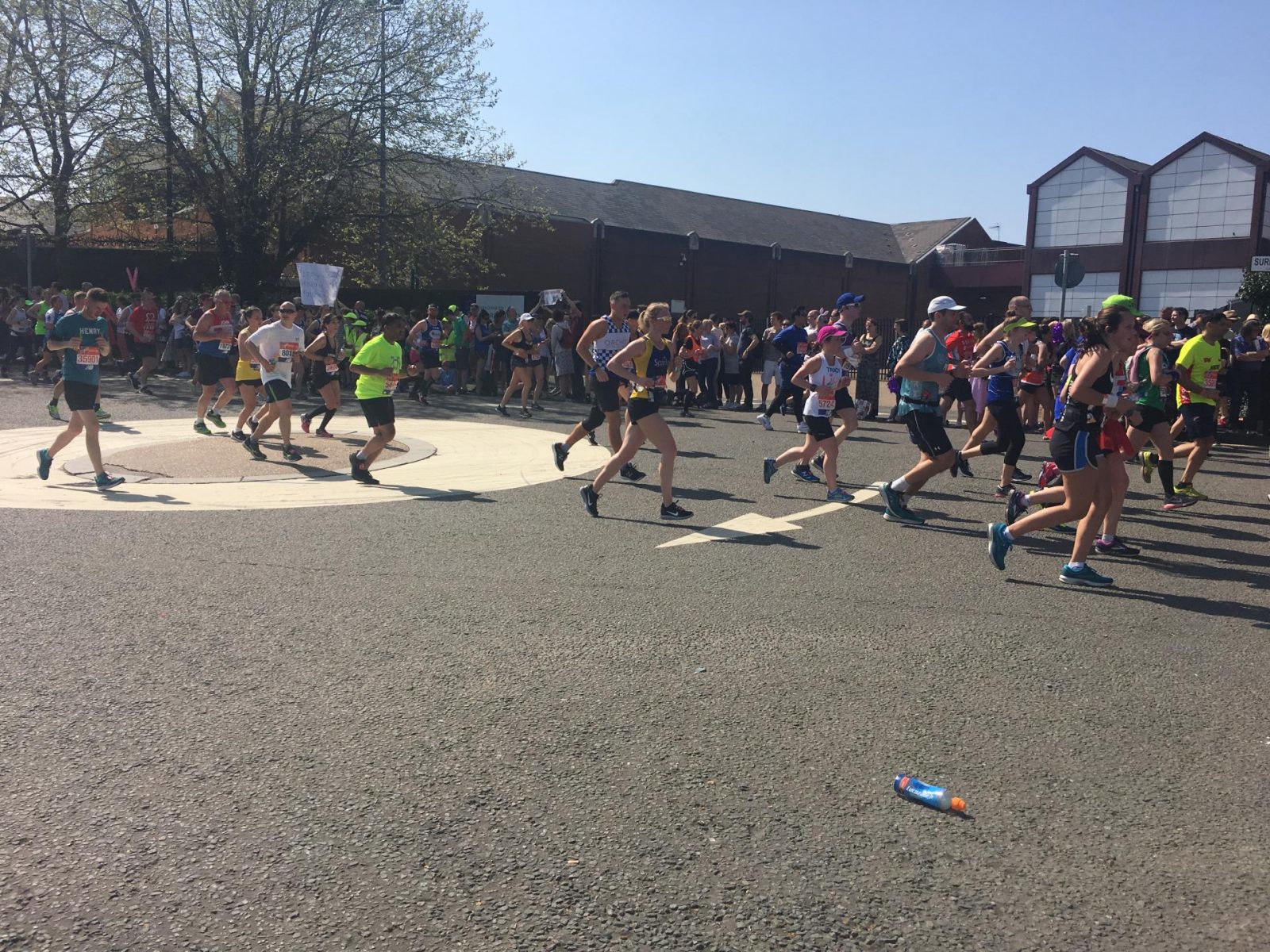 Just before the 15km mark

We started in Rotherhithe, just before the 15km marker. At this stage, everyone was looking fresh and enthusiastic. We were next to a steel drum band and people smiled and waved as they went by. I saw my colleague Katherine, running for our client Neurokinex, and my friend Brian. They both looked good. 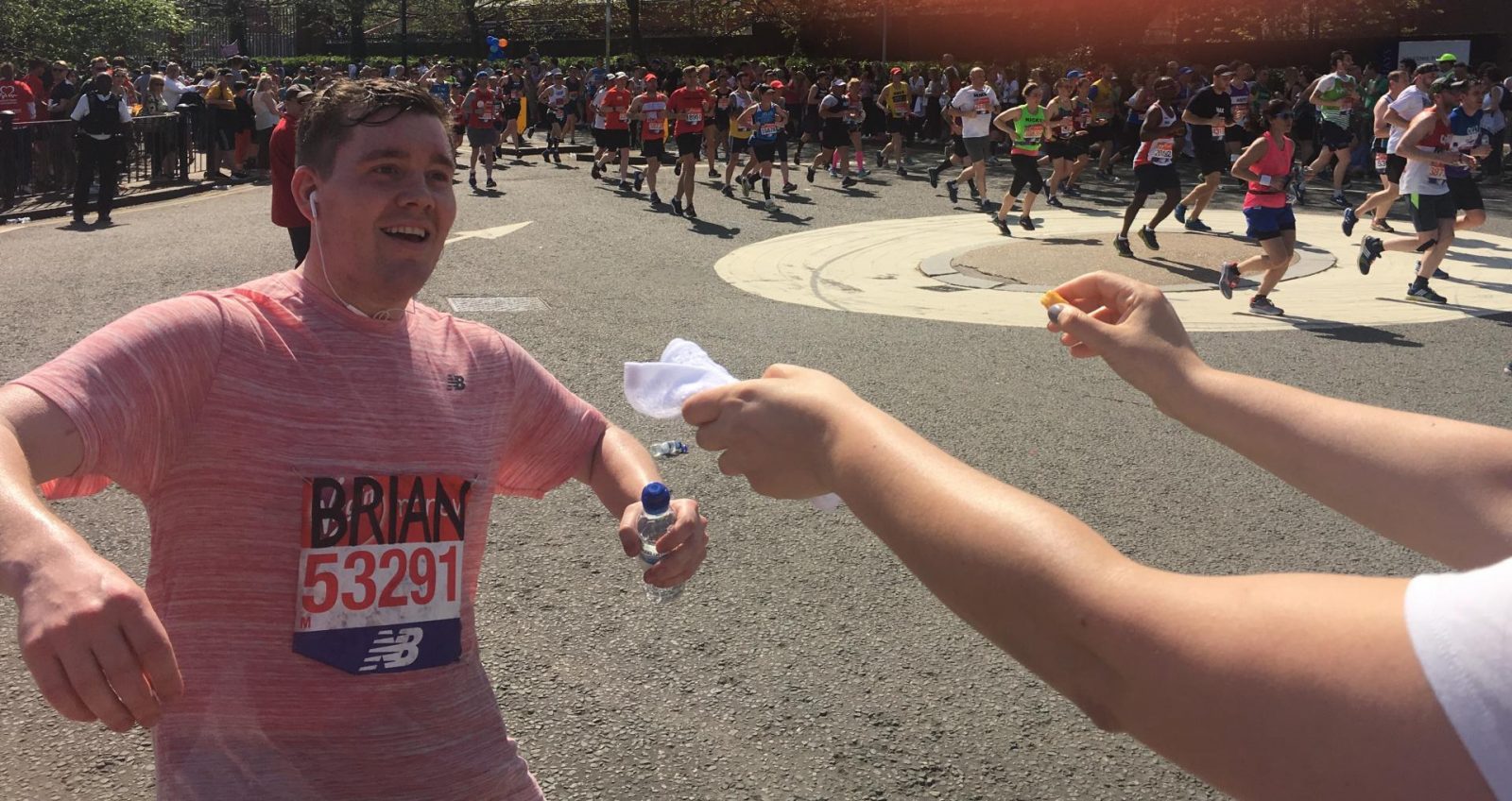 Despite the warnings to reconsider costumes given the weather, people remained dedicated to their plans and ran bravely in everything from a cardboard Big Ben to a whoopie cushion. It was both admirable and insane. We even saw a guy dressed as Jesus, carrying a cross and running barefoot in a loin cloth! 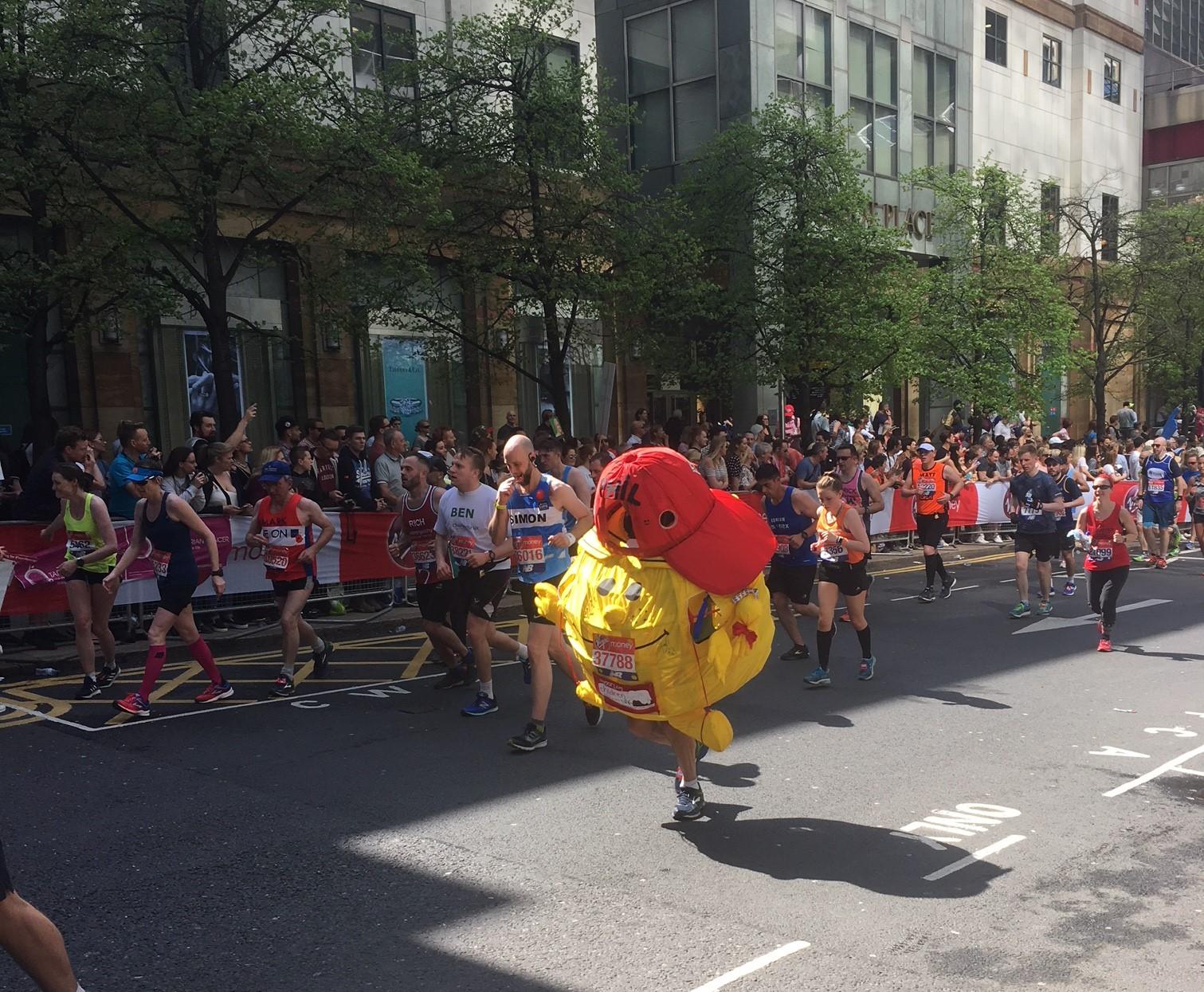 This could not have been easy.

Next, we headed to the 30km mark in Canary Wharf. This is where things started to look a bit grim. I was watching as my friend’s average paces slowed to a walking pace. People looked shattered. We positioned ourselves at the midway point of a tiny hill that seemed to be bringing many runners to a walk. 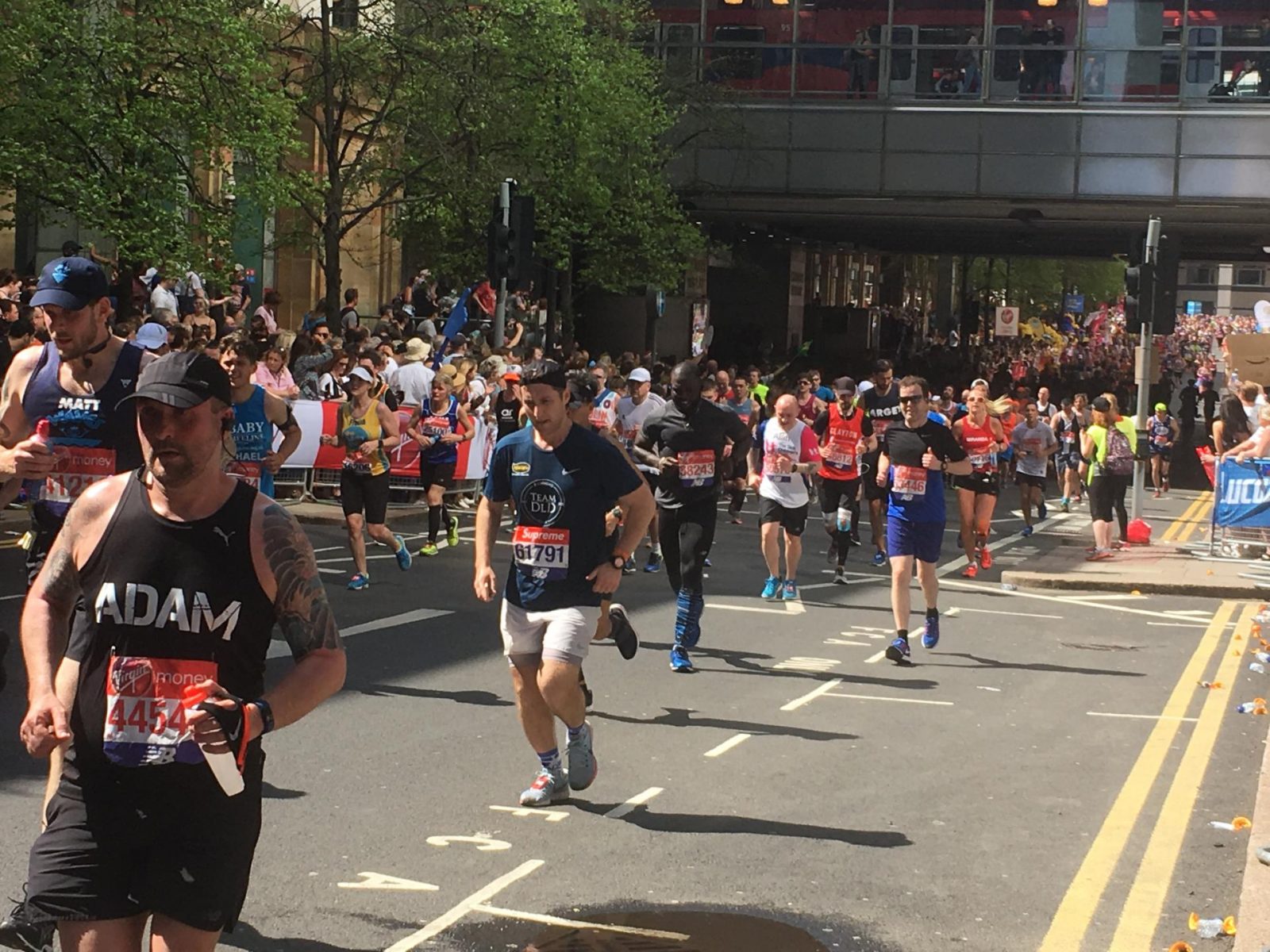 This is a tough point of a marathon, especially if you’re struggling. You’ve already come such a long way, but a remaining 12km can seem insurmountable. We held out candy and gels, cold towels and protein balls trying to be helpful. We saw my friend Brian again. He was tired, but I thought he looked pretty good, all things considered! 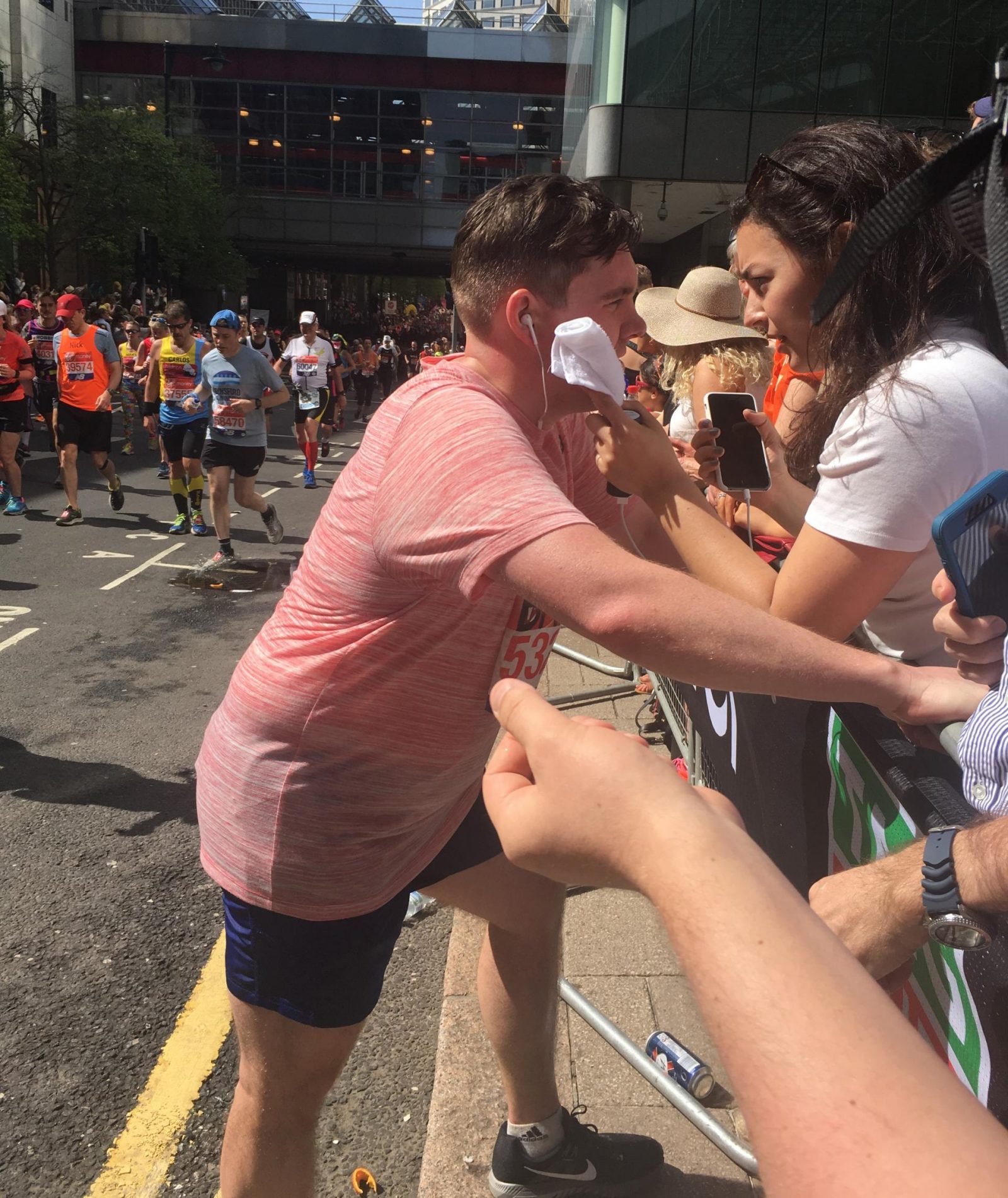 At this stage, we decided to leave. While I would have loved to go to the finish line, we knew it would be chaos, so we thought we’d be better off celebrating with our friends once they recovered a bit.

I had a strange feeling of both jealousy and relief at the side-lines. On one hand, I wanted to be running too, but on the other, I was happy I wasn’t. I felt a bit teary at several points. The marathon makes me emotional. I love the community and the dedication of runners. I love how many people were raising money for causes close to their hearts. I felt inspired and happy for all these wonderful people doing something amazing. I also felt proud of London. What an amazing event!

But I also felt a bit jealous. I wanted something to be proud of too. So, I went home and started plotting out a race calendar for the rest of the year. Up until recently, I thought I was having foot surgery so I didn’t really make any race plans this year. Now that the surgery is called off, I’m making new race plans. More on both these topics in future posts!

For now, a HUGE congratulations to Brian, and all my other friends who ran yesterday: Katherine, James, Richard.  You are all so tough and amazing and you should feel proud no matter what time you crossed the line. You are champions!

I’ll be joining you at the start line of the London Marathon one day!