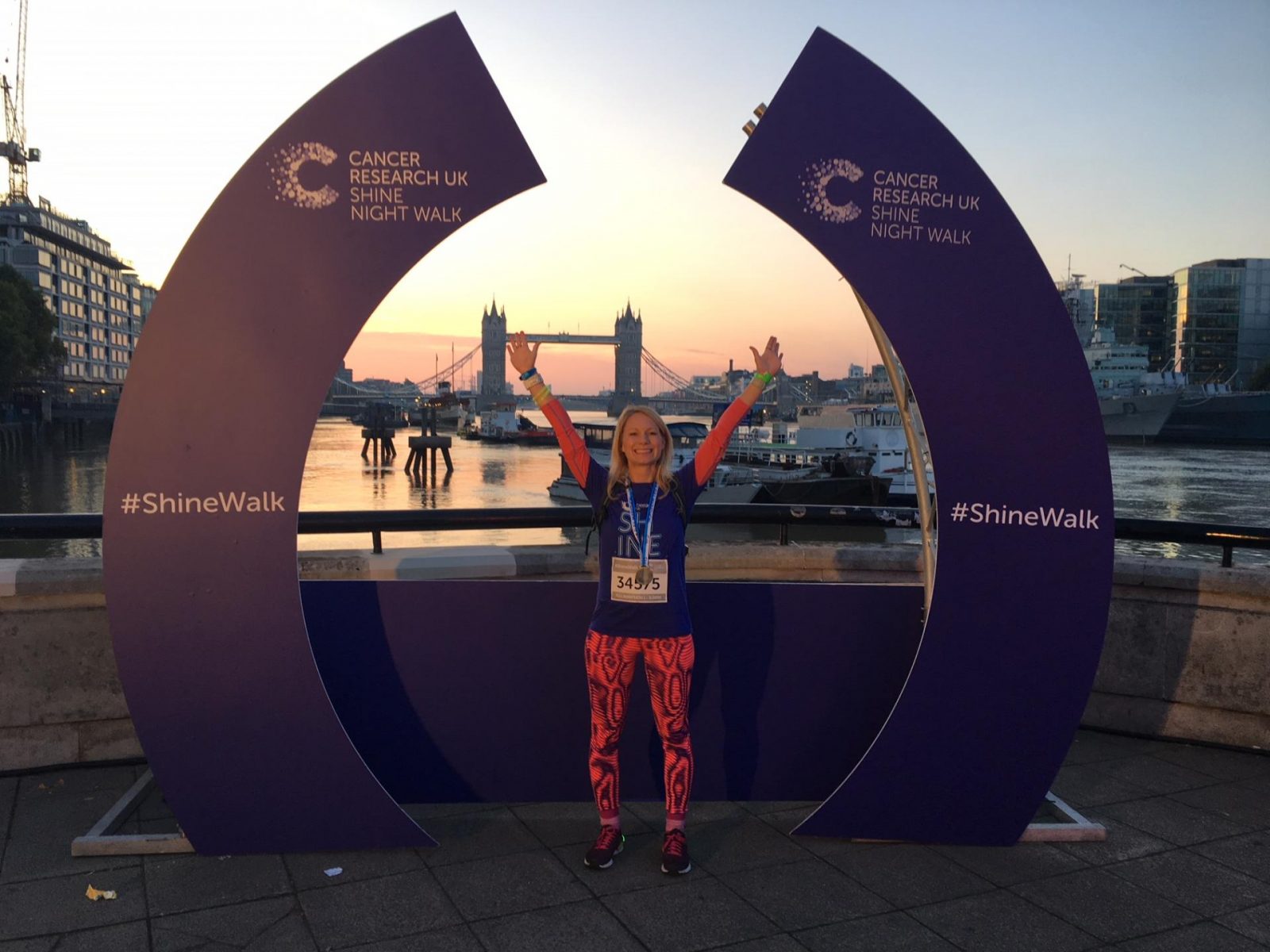 I was little apprehensive about the Shine Walk. A fundraiser for Cancer Research UK, the Shine Walk is a half or full marathon night walk that attracts more than 16,000 people. Several months ago, when we first discussed the event at work, I enthusiastically put up my hand to participate in the full marathon. One of my clients, Everyone Active, was a sponsor, so we were putting together a team of media and bloggers to take part in the event. At the time, I was new to the Action PR team so I was keen to firmly cement my reputation as a committed team player. Not only would I do the full marathon, I’d lead the team as well. Why not? After all, I had recently run a marathon. Surely, I could walk one, right?

In the following weeks, I carried on with my normal running and gym routine, logging a total of 0 long walks. Nevertheless, I was cautiously optimistic, or perhaps a little arrogant. I likened the event to our summit night when Graham and I climbed Mount Kilimanjaro in 2015. It couldn’t possibly be harder than that. 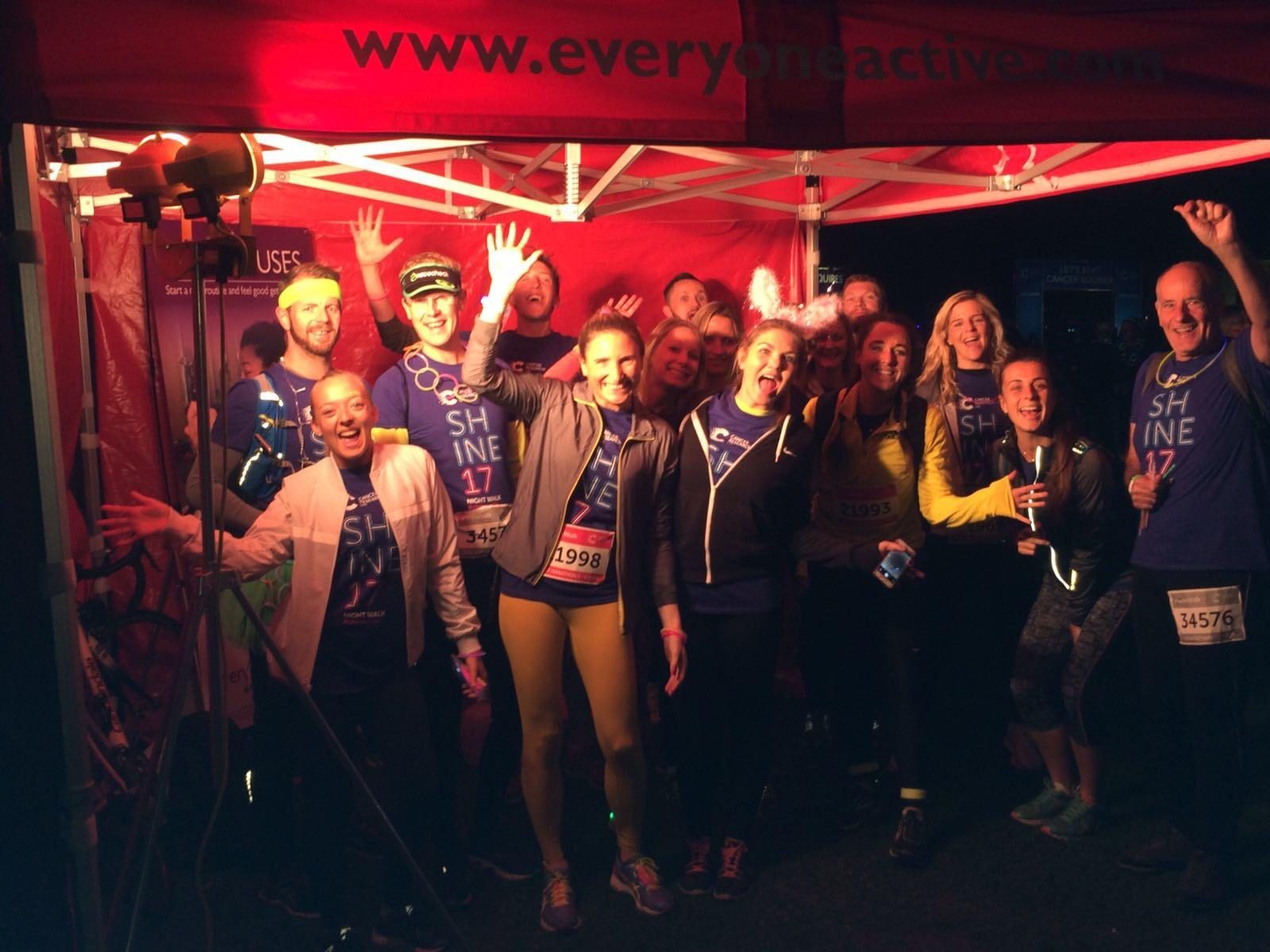 Both the half and full marathon teams assembling at the Everyone Active tent. (Don’t worry, Cheryl IS wearing leggings. They were yellow and amazing… just some unfortunate lighting here)

My team consisted of five guys. My colleague Charlie and four other guys I had never met. Months ago, I volunteered to be an ambassador for The National Running Show, a large running trade show taking place in Birmingham in January. The four guys I recruited are all fellow ambassadors and bloggers, so I knew we were going to have a strong team of athletes. Paul once cycled the entire length of the country, more than 1,000 miles from John o’Groats to Land’s End. Richard carried the 2012 Olympic torch and is a Guinness World Record holder for fastest half marathon dressed as an animal. (It was a sheep, by the way). Martin, despite having diabetes and lymphoedema in his legs, has done close to 30 races. And Edward, believe it or not, did his first Tough Mudder that afternoon before meeting us for the walk. My colleague Charlie is pretty cool too. In 2016, he walked 2,650 miles from Mexico to Canada on the Pacific Crest Trail for mental health awareness, and recently he cycled 1,200 miles over two weeks from the Rock of Gibraltar in Spain to London! 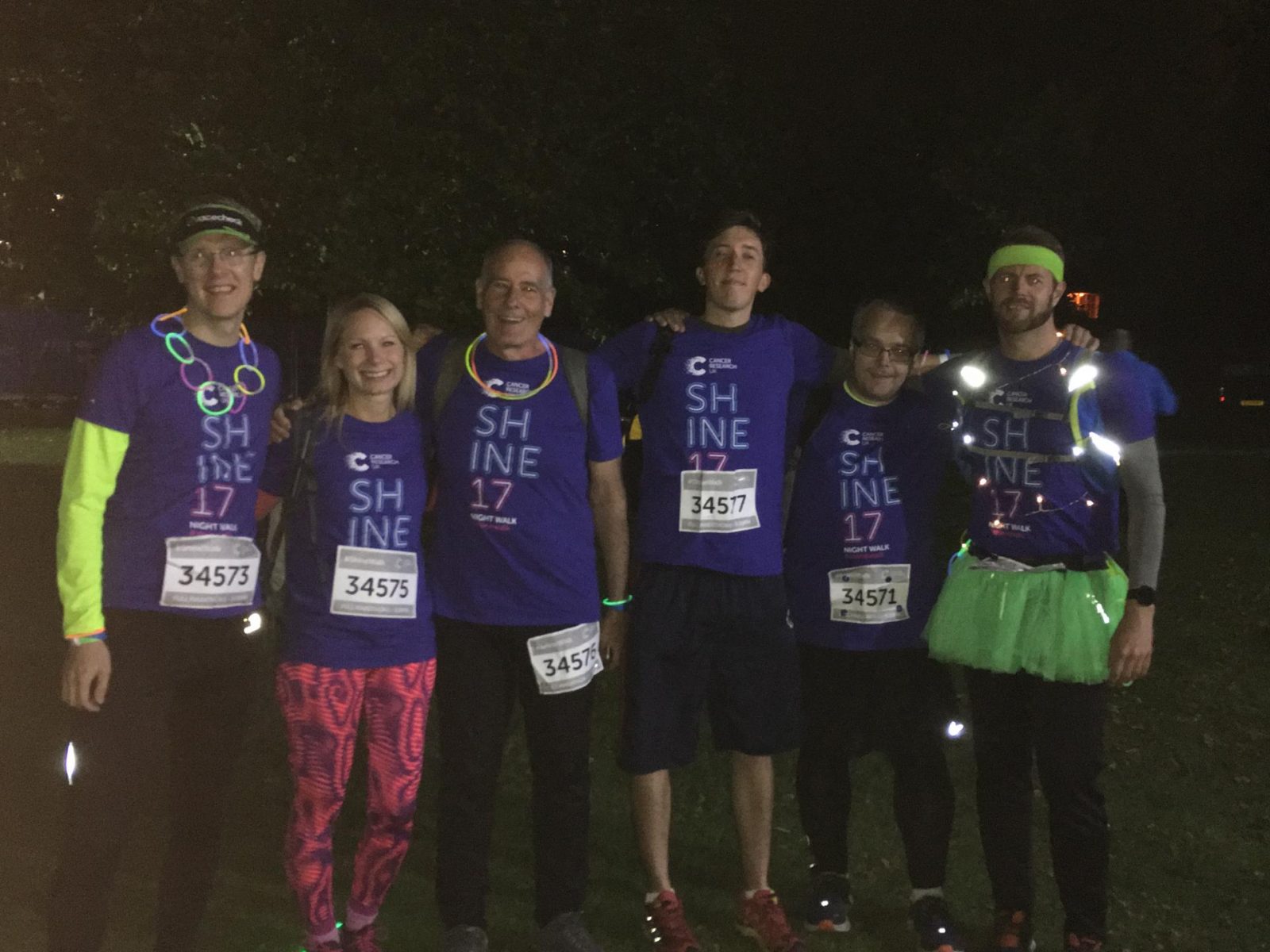 Hanging out behind the stage, waiting to start

So, it was me and 5 very impressive guys…for 8+ hours. At least we had plenty to talk about!

Our walk started at 9:20pm. If we kept a reasonable walking pace, I estimated I could be home and in bed by 7 am.

Because we were designated “VIPs” we got special access to the start line, which was a unique experience. 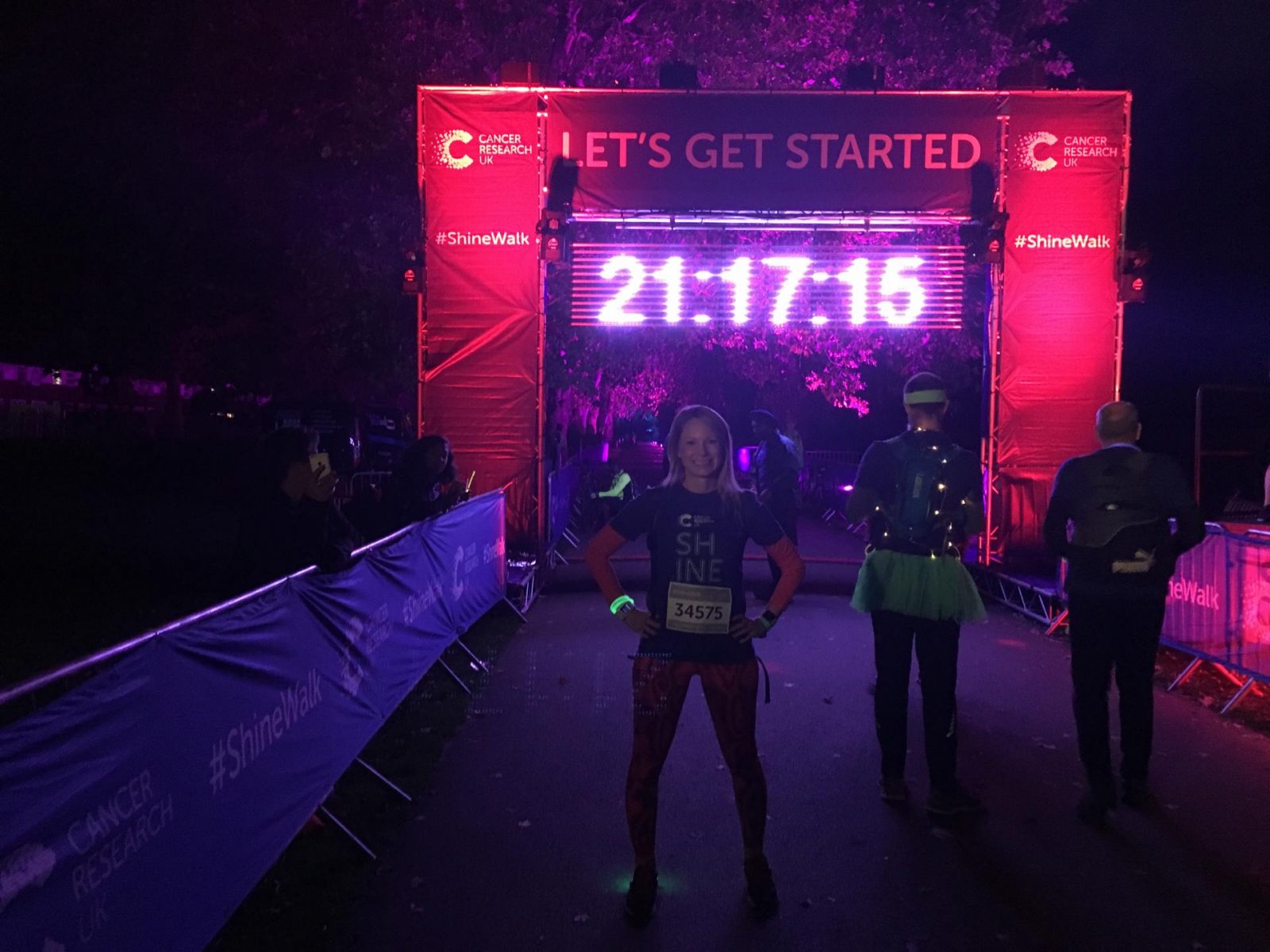 I had a rare glimpse of what it might be like to be an elite runner, starting at the front of the pack. That said, setting off at walking pace, instead of sprinting off the starting line is a bit anticlimactic. 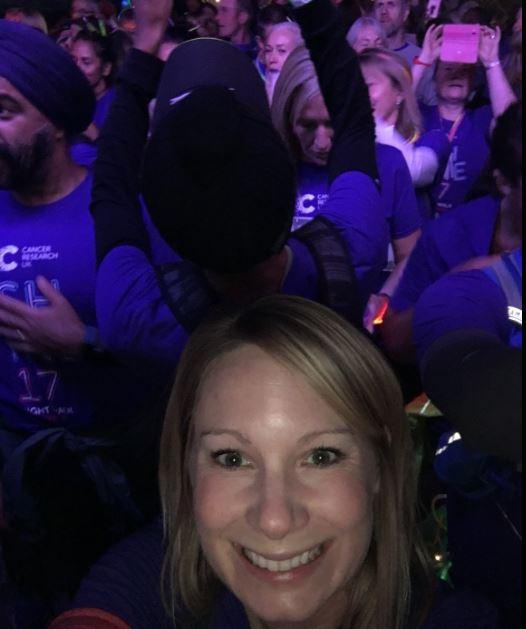 Off we go! The first of many selfies.

The race route meandered through city streets, passing by many of London’s most iconic landmarks: Tower Bridge, Big Ben, Houses of Parliament, St. Paul’s Cathedral, The London Eye, Buckingham Palace, to name a few. I rarely stay up past midnight these days, so it was an interesting glimpse at London’s nightlife, especially once the bars closed. 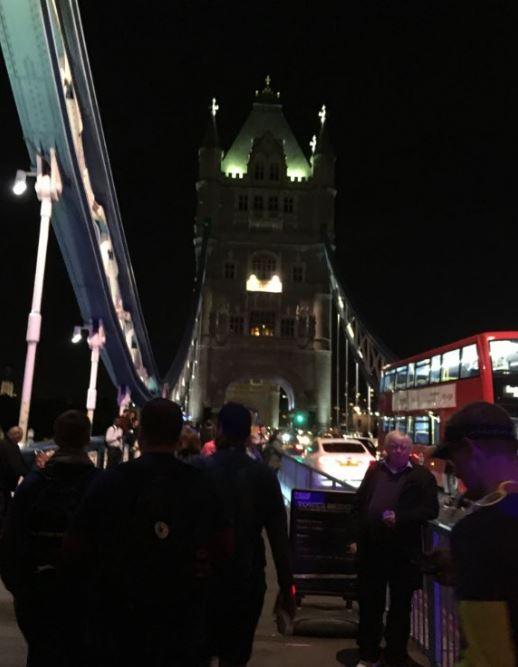 The route was left open to traffic, so there was a lot of waiting at red lights and intersections, which felt a bit tedious. I’m so used to watching my time in races, conscious that every stop adds precious seconds onto my finishing time. After several hours, that feeling went away and I settled into the slow, unhurried rhythm of the walk. 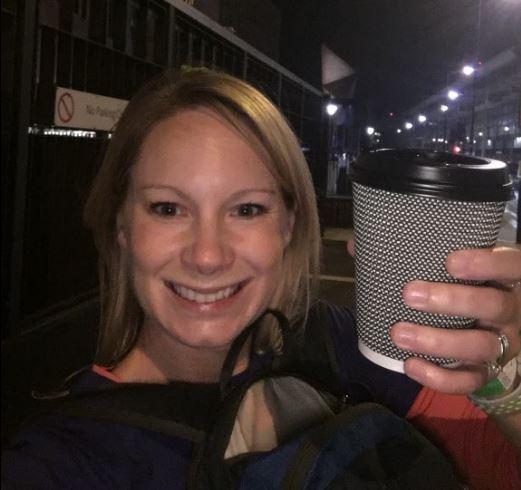 We made great use of every pit stop. In fact, I feel like the majority of my race was punctuated by needing to pee and waiting, what felt like an eternity, for the next opportunity. Walking is really, really slow. A few miles takes forever. It was an odd feeling to stop so frequently and for so long each time. As we casually lined up for coffee and took various photos, there was no frantic rushing like there is in a normal marathon. At times, it felt as if we were just out for a casual stroll around London. No wonder it took us 9 hours, 19 minutes and 40 seconds to finish the walk! 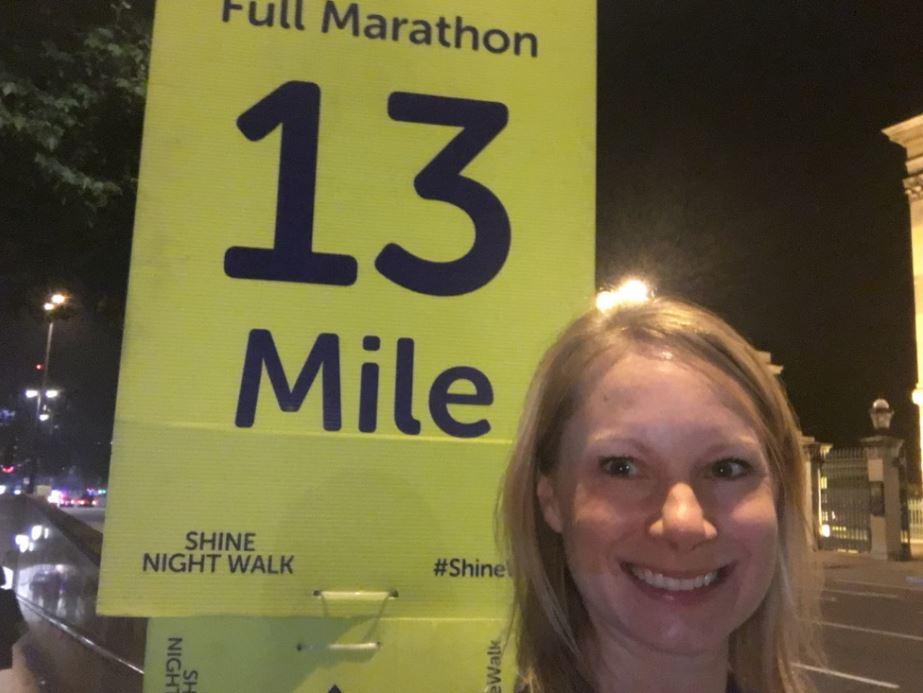 One might think that “just walking” wouldn’t be much of a challenge, but you would be wrong. For the most part, it was completely fine, but by the time it got to be 5am, then 6 am, I was tired, both physically and emotionally. 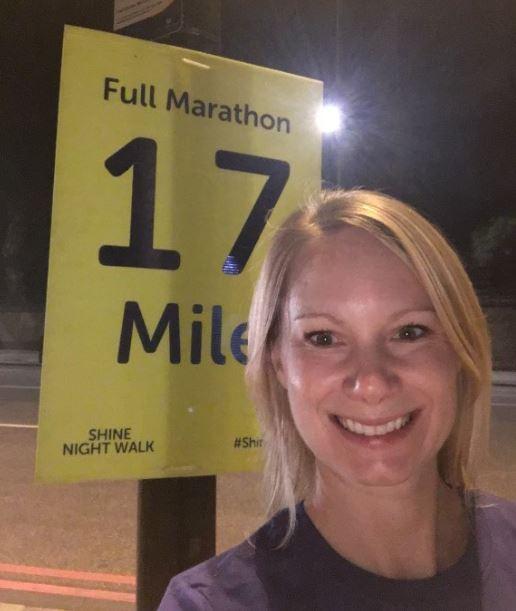 My hip flexors and feet ached. My eyes burned. The final miles felt like an absolute eternity. While this walk is less intense than running a marathon, the endurance required is different and demanding.

5:54 am: This was the hardest part. Those last miles seemed interminable.

That said, the earlier portion seemed fast and enjoyable, made memorable by the many interesting and engaging conversations I had with my team. You really get into some deep conversations when you’re forced to walk with someone for 9 hours. 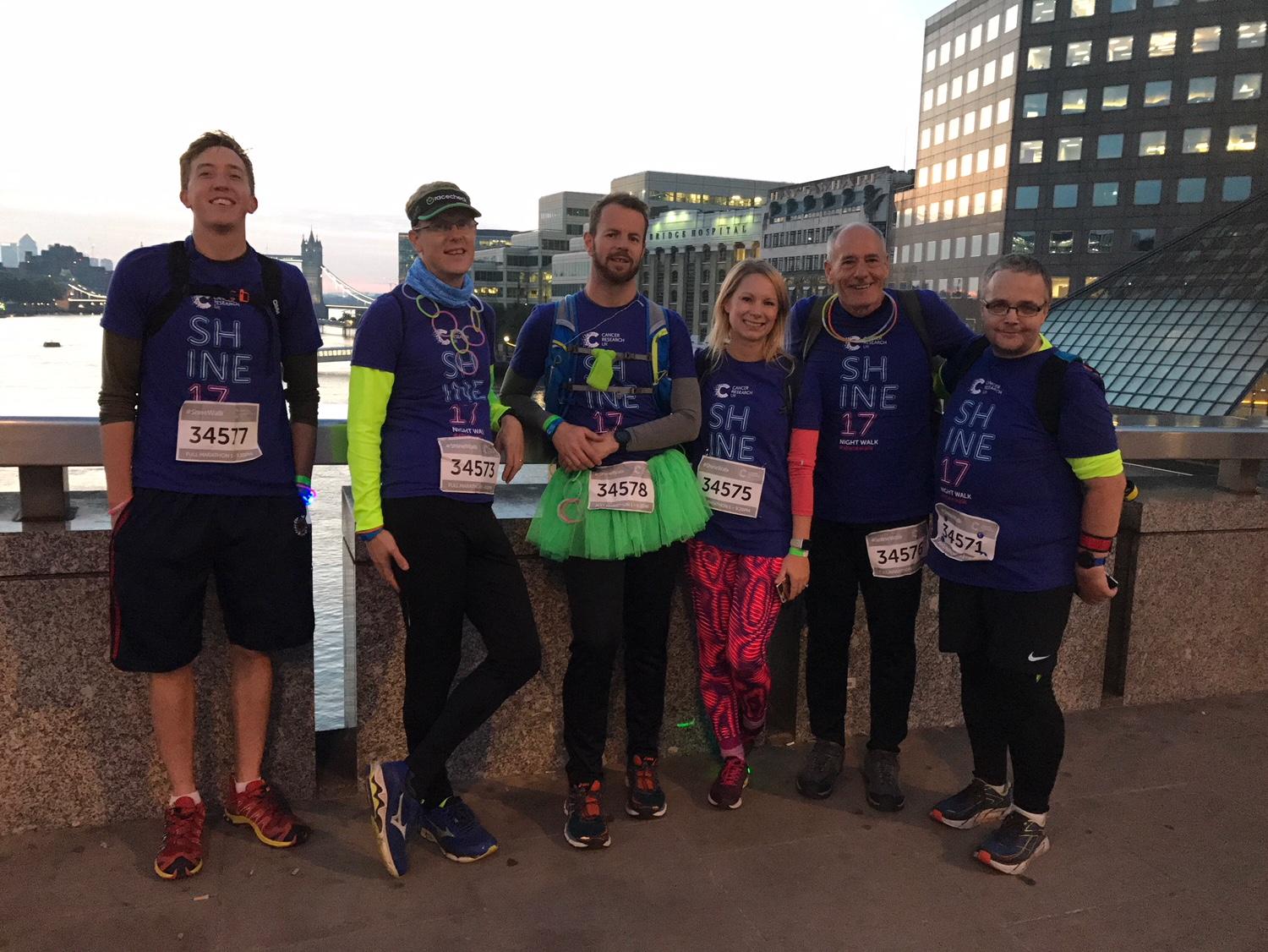 We talked about running and racing a lot, sharing stories of our favourite events. We talked about bucket lists, favourite books and magazines. We also talked about life. Families, jobs, health and life happiness. I laughed a lot. And I learned a lot too. 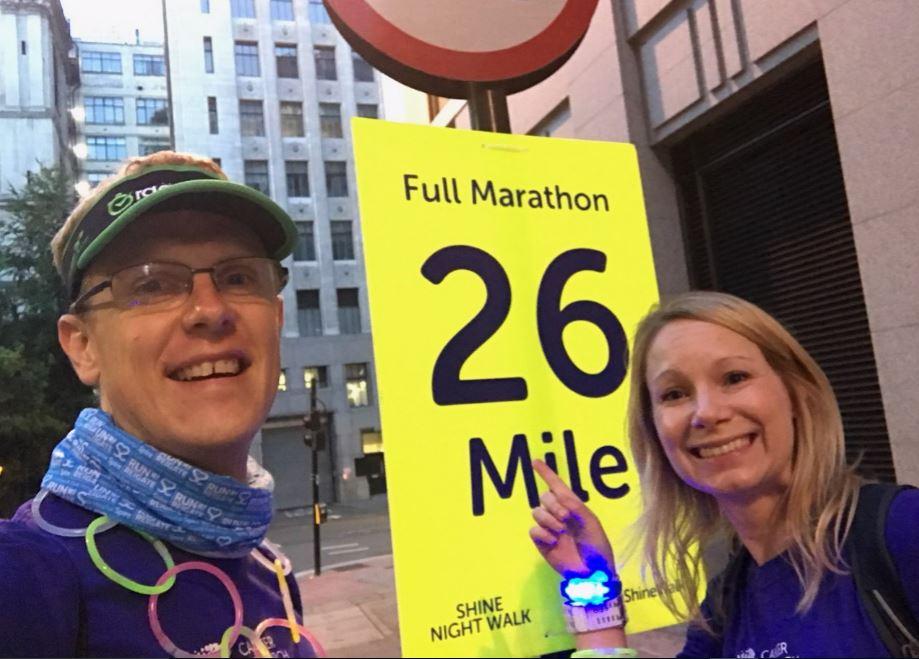 Before the race started, we agreed that if we split up along the way that would be OK. Besides, it would be unreasonable to assume that we would all walk at the same pace for 26.2 miles. But we stuck together. Right until the finish line. I didn’t know these guys at 7pm when we met, but by 6 am the next morning, they felt like lifelong friends. We crossed the finish line and gave each other a big, congratulatory hug. 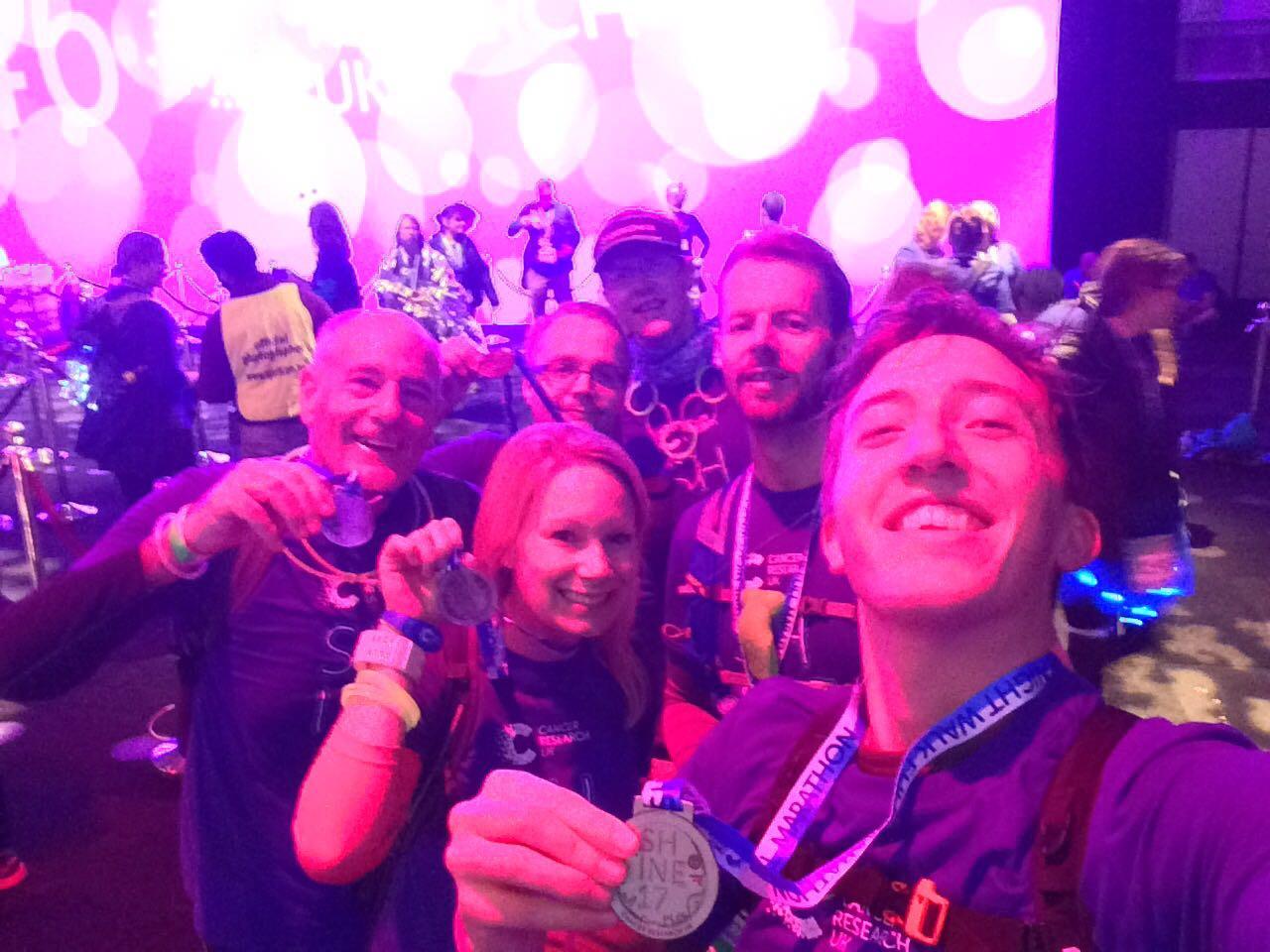 What could have been a very gruelling event was made exponentially better with good company. That said, I think a marathon walk is something I can be happy only ever doing once. For the future, I’ll stick to running.

Richard, one my team members, made this awesome video of our walk. All 9 hours in less than 9 minutes! Check it out:

And, there’s still time to make a donation to our Shine Walk team. Click this link, then click on Donate next to my name. 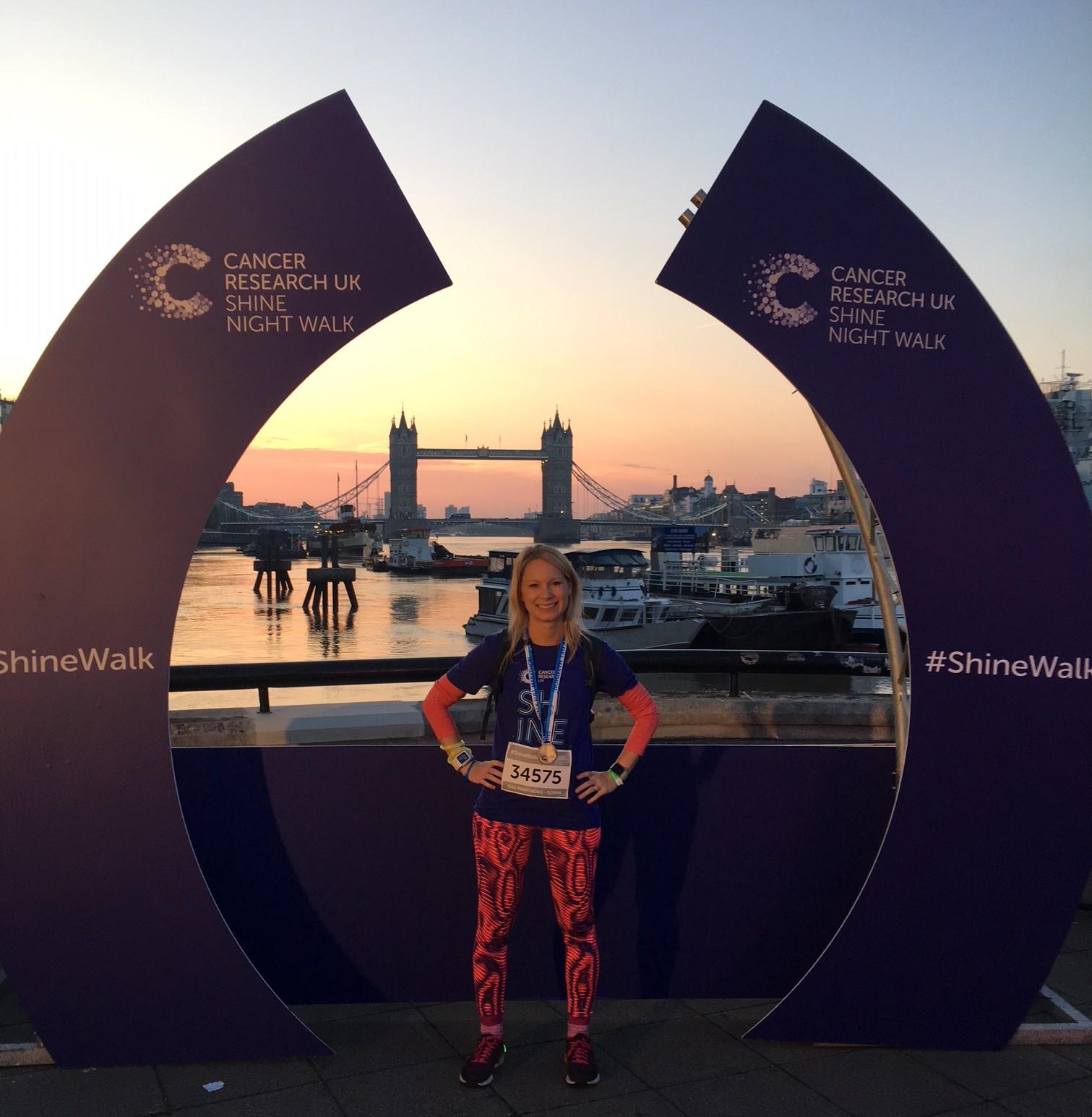