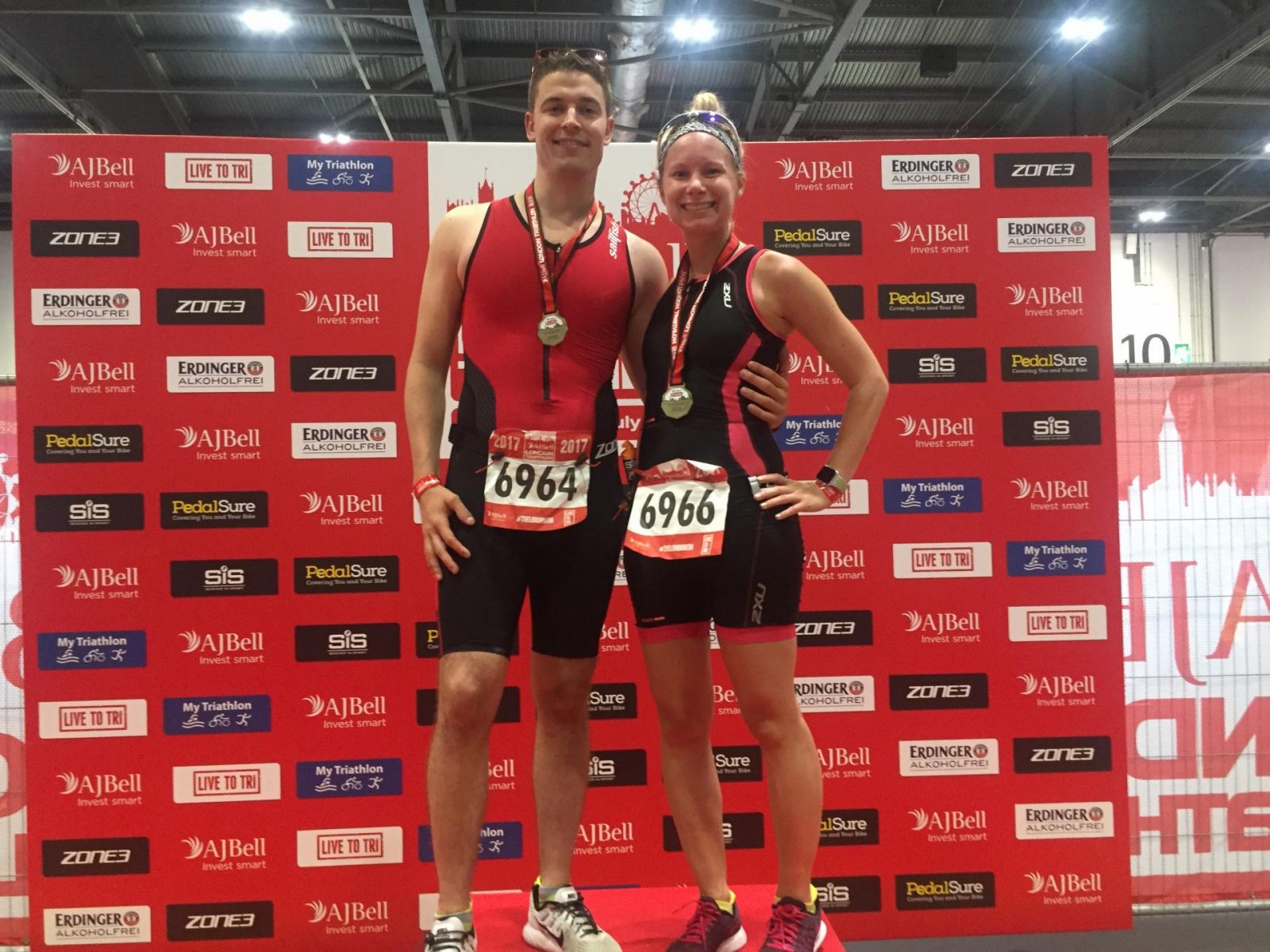 On Sunday, I completed my first Olympic distance triathlon! I had a (mostly) marvellous time and totally surprised myself with a finishing time of 3:07:17. My original estimation was 3:20, which went up to a dramatic 4 hours the day before (I was having a bit of a last-minute meltdown).

Admittedly, I wasn’t in the mood to race on Sunday. I was feeling annoyed with the whole business of triathlons. It is such a high maintenance sport! I feel like it took me half the weekend to get my gear together and I spent most of Saturday doing my usual pre-race fussing. I assumed the worst. I had anxiety nightmares ranging from tire punctures to drowning. It was off to a foreboding start. 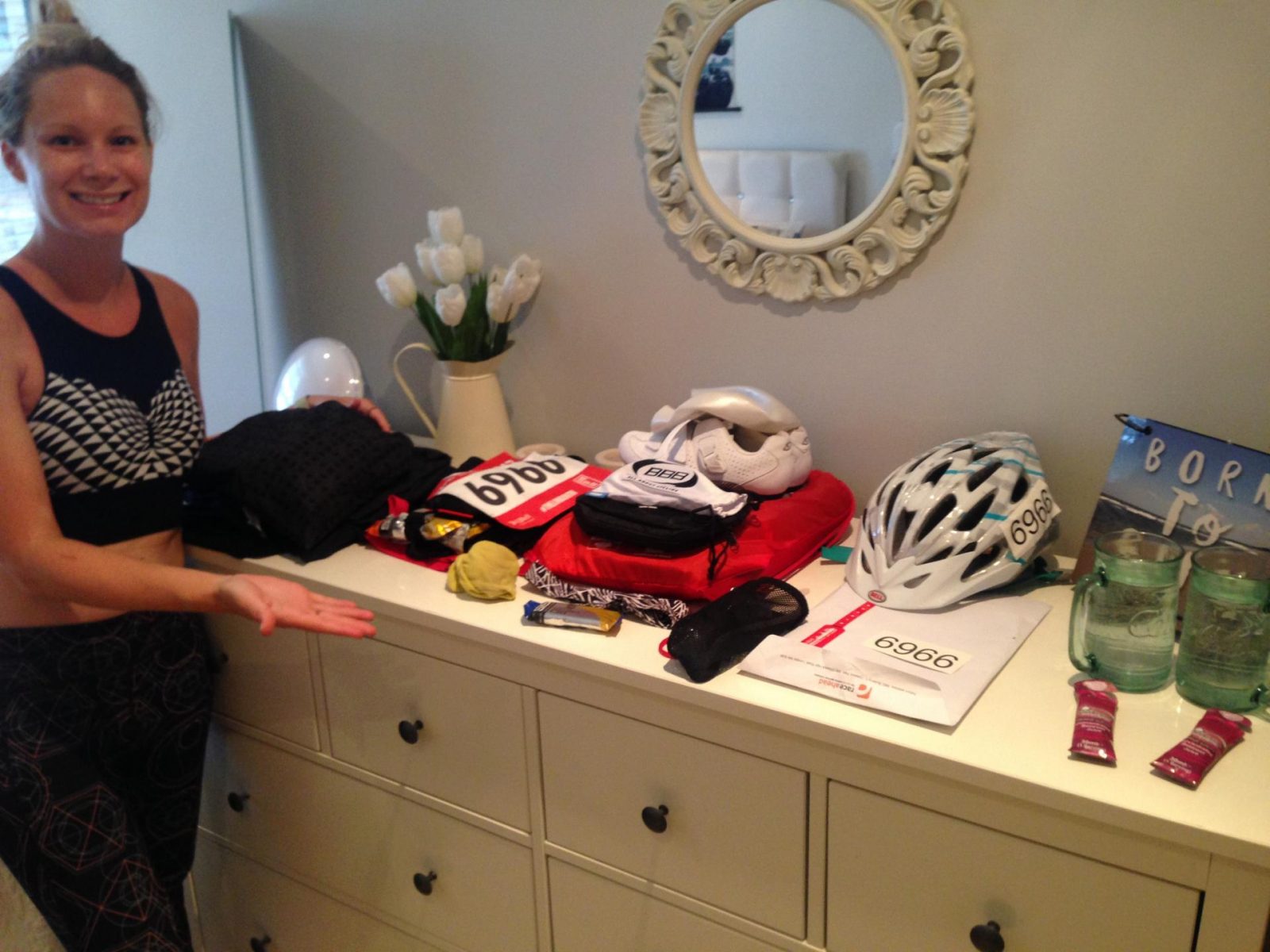 It really is a lot of stuff.

The whole process of getting to the Excel Centre for the race was a pain in the ass, and we were late because we lost the bike lock key to Graham’s bike. After a 15 minute panic (all mine), he found it, in my running shoe. It had fallen off the cabinet and landed in my shoe! Sneaky key.

We arrived with just enough time to set up and wiggle into my wetsuit. I didn’t have a lot of time to fuss, which was probably a good thing, both for me and my relationship.

In addition to Graham and myself, we had a strong team of friends doing the race this year and we were all in the same wave which was really nice. Friendly faces and motivational pep talks definitely make things better! I moaned a lot about the 7:40 start time, but in the end, this was actually fine (save for the 5 am wakeup). 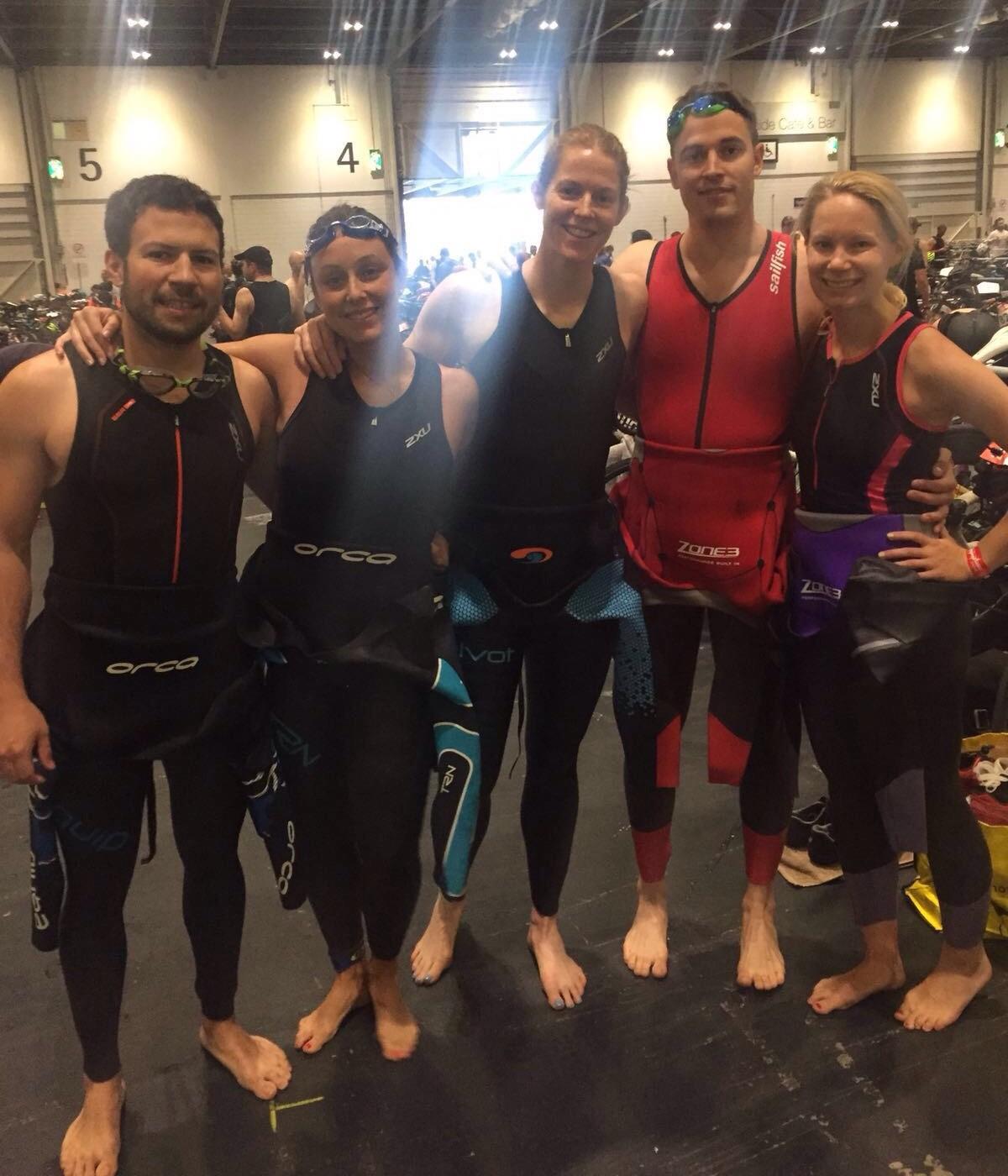 Pre-race team pic (minus Kyle who was in the loo)

Suddenly we were in the water and swimming. With a mixed wave, I made a concerted effort to stay away from all hyper-competitive alpha males. I was not going to risk being bashed in the face for the sake of a few minutes. I was employing the tortoise approach: slow and steady, all the way through.

That said, the swim felt really fast and I reached the first turnaround in what felt like a few minutes. After that, it got a bit tedious and I found it hard to find a clear path. I ran into a lot of people. Elbows and feet were everywhere and I think I clawed someone with my toenails. (Sorry!) I guess that’s just part of the triathlon experience! Several mouthfuls of the Thames later, I was out of the water and dashing off toward my bike. Despite the fact that it was one of my fastest swims to date, I barely felt winded. I wasn’t wearing a watch, but I knew I was ahead of schedule. My confidence was on the up and up.

I awkwardly hobbled to the Bike Out area in my cycling shoes. This was my first race with my new clipless pedals. I un-glamorously mounted my bike and off I went for the longest leg of the event.

Overall, I was averaging a pretty good pace – faster than many of my practice rides. I have a little speedometer on my bike and on some downhills I made it up to staggeringly fast speeds of more than 40km/hour. I had to exercise extreme self-control to not use my brakes. I am a wimp. 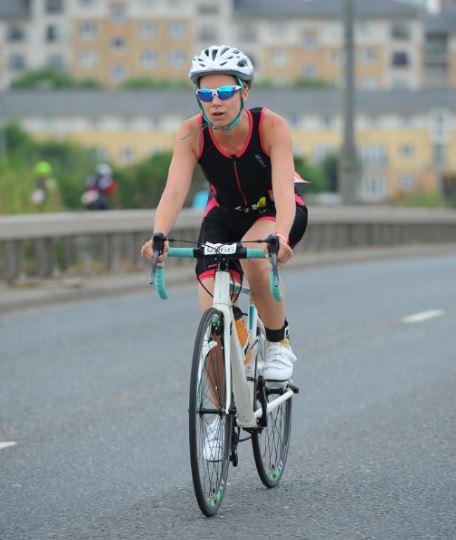 Guys on carbon-fibre bikes with aerodynamic helmets whizzed by yelling “Right!! On your right!” I felt like I was passed by every man, woman and child. (OK, there were no children, but a LOT of people passed me). Thankfully I managed to eat two gels and drink something without crashing. A guy passed me with three bananas in his cycling jersey. I chuckled out loud thinking it all seemed a bit excessive. Anyway, I finally made it to the end but my bike was displaying just 37.5km total. I was convinced I had made a wrong turn somewhere and would probably be disqualified.

I dismounted my bike and jogged to transition to put on my much beloved and familiar running shoes.

Ahh…. The glorious run. I immediately felt better as soon as I put my running shoes on. My feet felt a bit numb and weird from cycling, but I had lots of energy left and was buoyed by the prospect of 10km of running ahead of me. This is where I would get some vindication! This is something I’m good at! 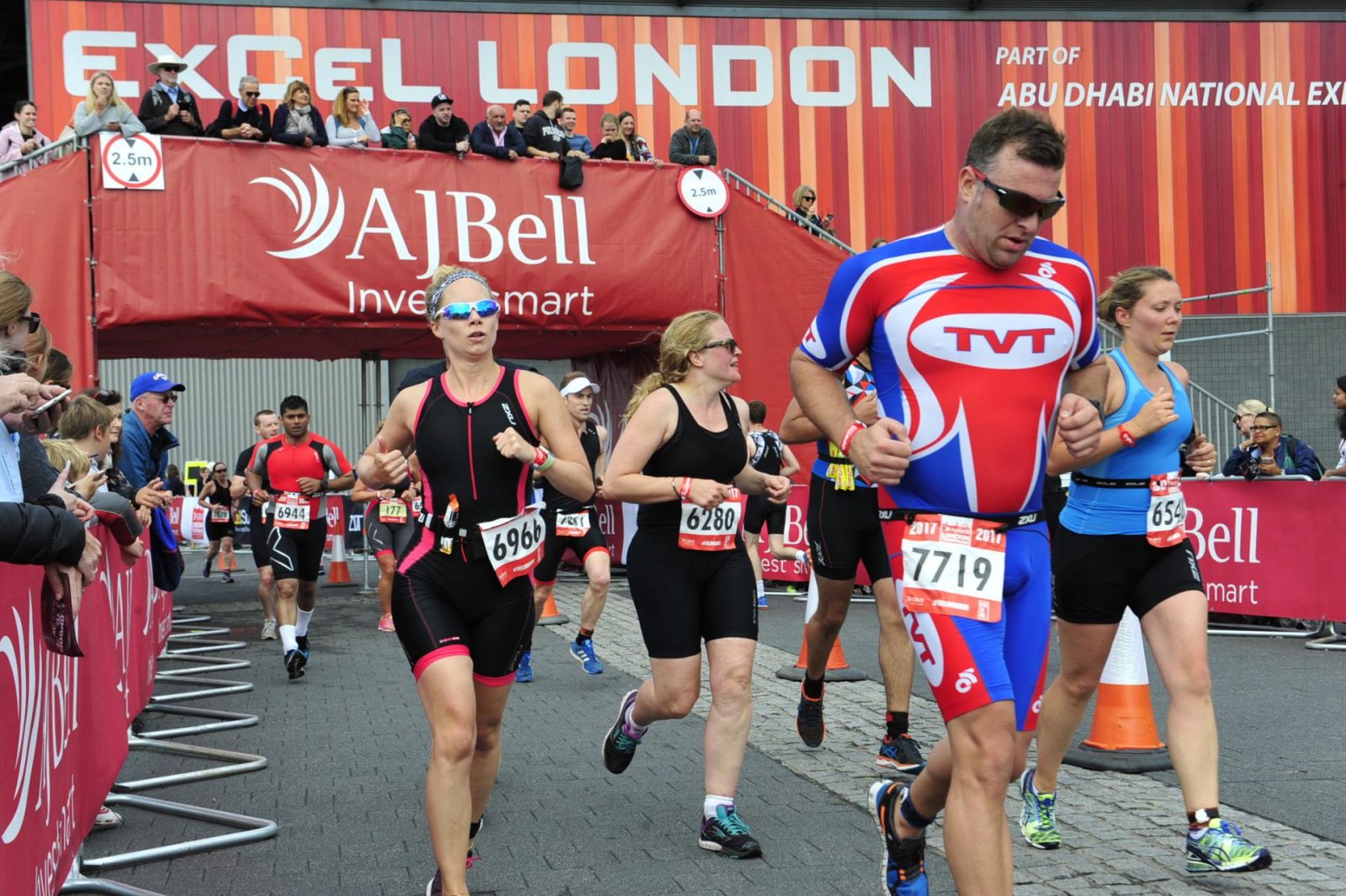 In my happy place

I felt excellent during the run. Having just cycled 40km, I was feeling surprisingly fresh and was averaging a pretty swift pace. I passed a LOT of people. I felt joyous. I was just so happy triathlons end with running. I crossed the finish line in my usual style: arms in a victorious V. 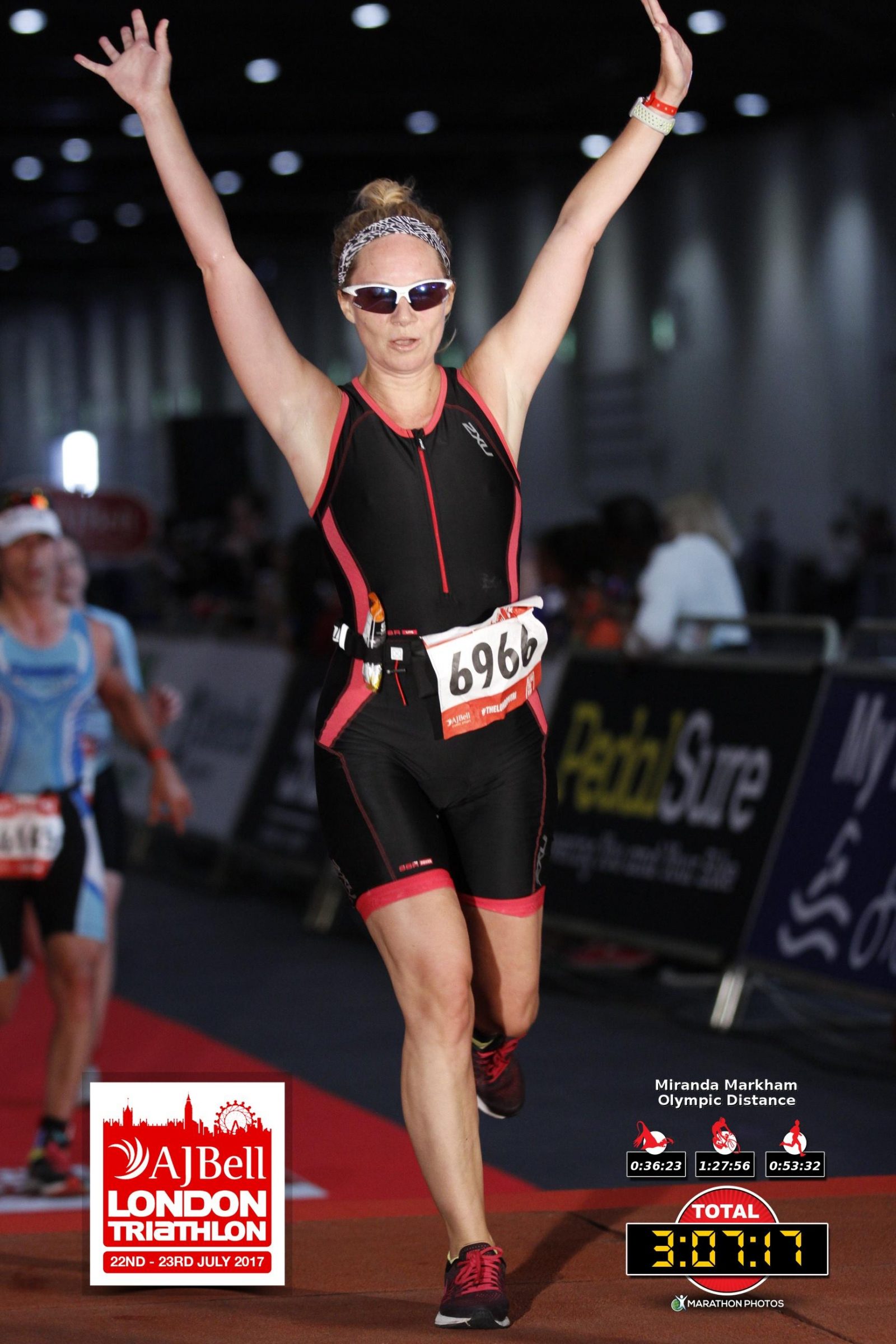 Here is a breakdown of my final stats: 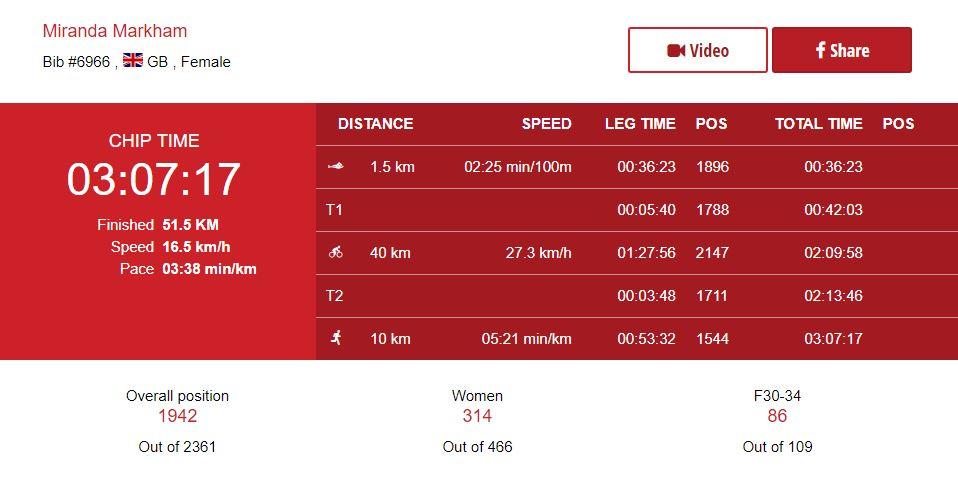 Despite a time that far exceeded my expectations, I really didn’t place very well in my age category! 86 out of 109 is pretty sad, but I will try not to dwell on it. I knew I was never going to break any speed records.

I was the last of our group to cross the line, but it was nice having them all there cheering for me at the end! We are quite a speedy group, ranging in finish times from 2:37:30 to my time of 3:07:17! Graham did amazingly well, knocking more than 15 minutes off his time from last year finishing in 2:44:50! 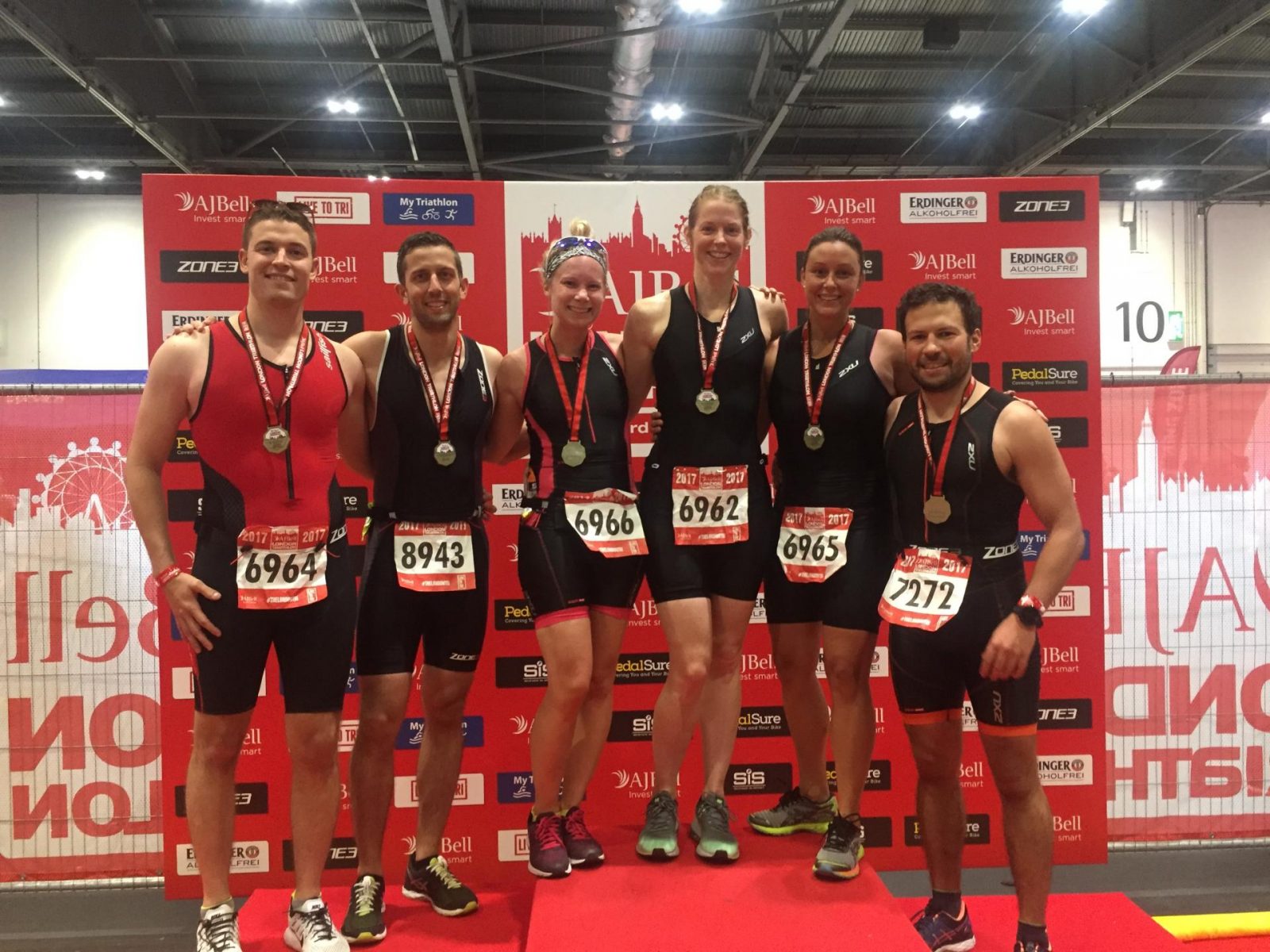 I have fit friends

Naturally, we needed many celebratory pics: 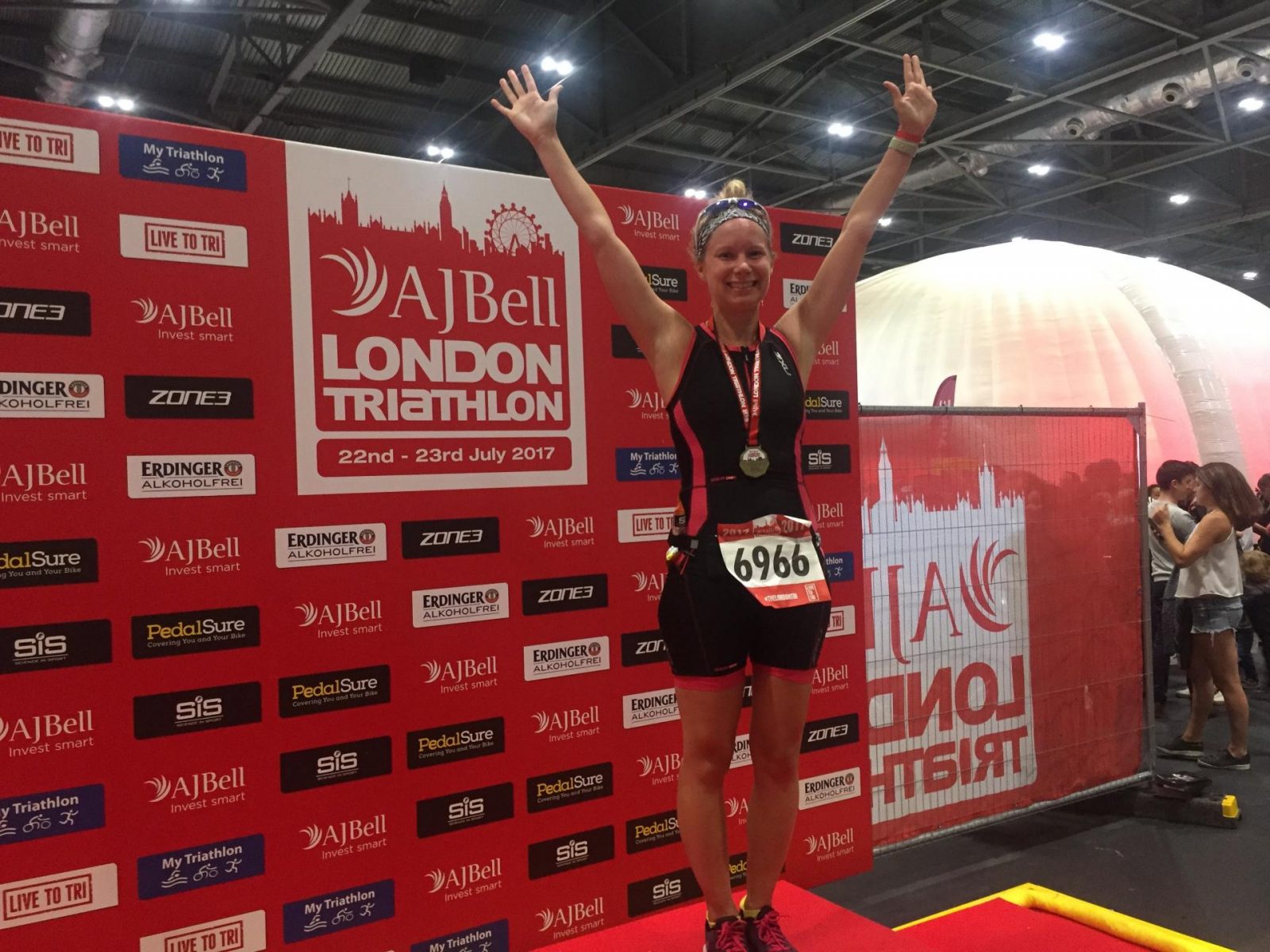 And as is tradition, we headed to the pub for some well-deserved drinks and food. I celebrated with a roast and some rosé. 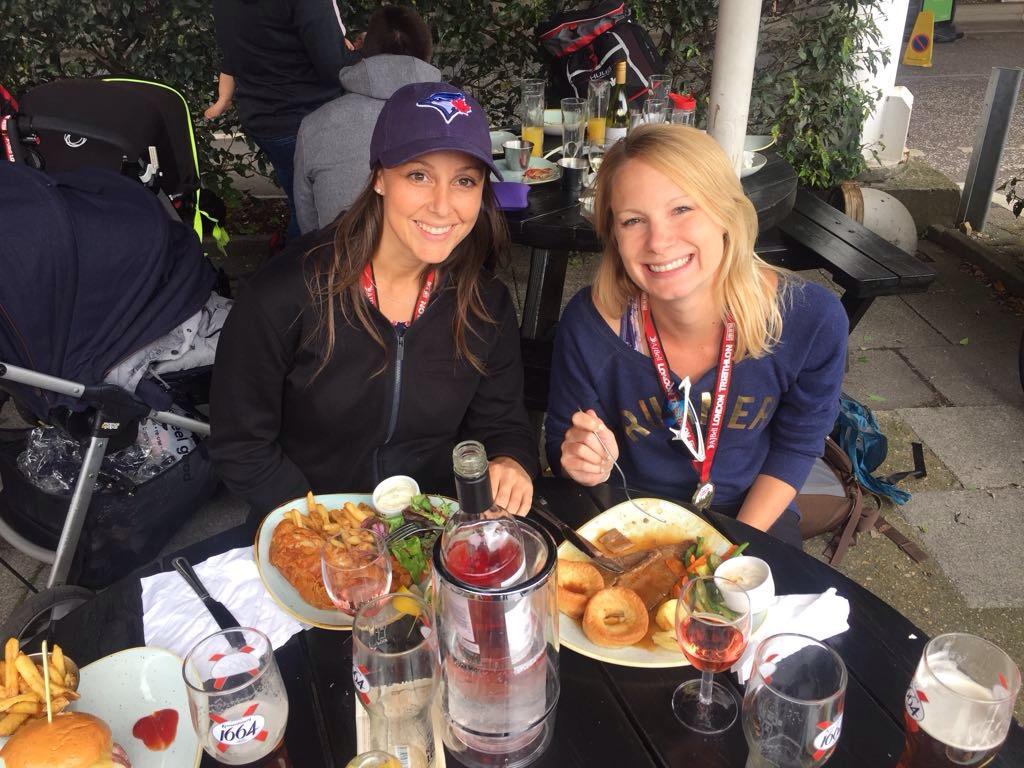 I am genuinely thrilled about this roast.

I’m pretty proud of my progress in this sport in just over a year. It was just last August that I did my first ever triathlon. Since then, my times in every discipline have improved remarkably, even if I am among the slowest women aged 30-34! While running is truly my first love, I could definitely be convinced to do another triathlon.

That said, this race marked the end of 7 months of hard training. With a new marathon PB and my first Olympic tri now successfully complete, I am going to refocus my efforts on some strength training. I am going to try some new classes at the gym. I also want to reunite with Parkrun and maybe do some 10km races.

For now though, I’m happy with an empty race calendar.

Big shout outs to Team Canada for an amazingly impressive race, especially Kyle who swam most of the 1.5km without goggles because they broke shortly after the start! You guys are an inspiration.