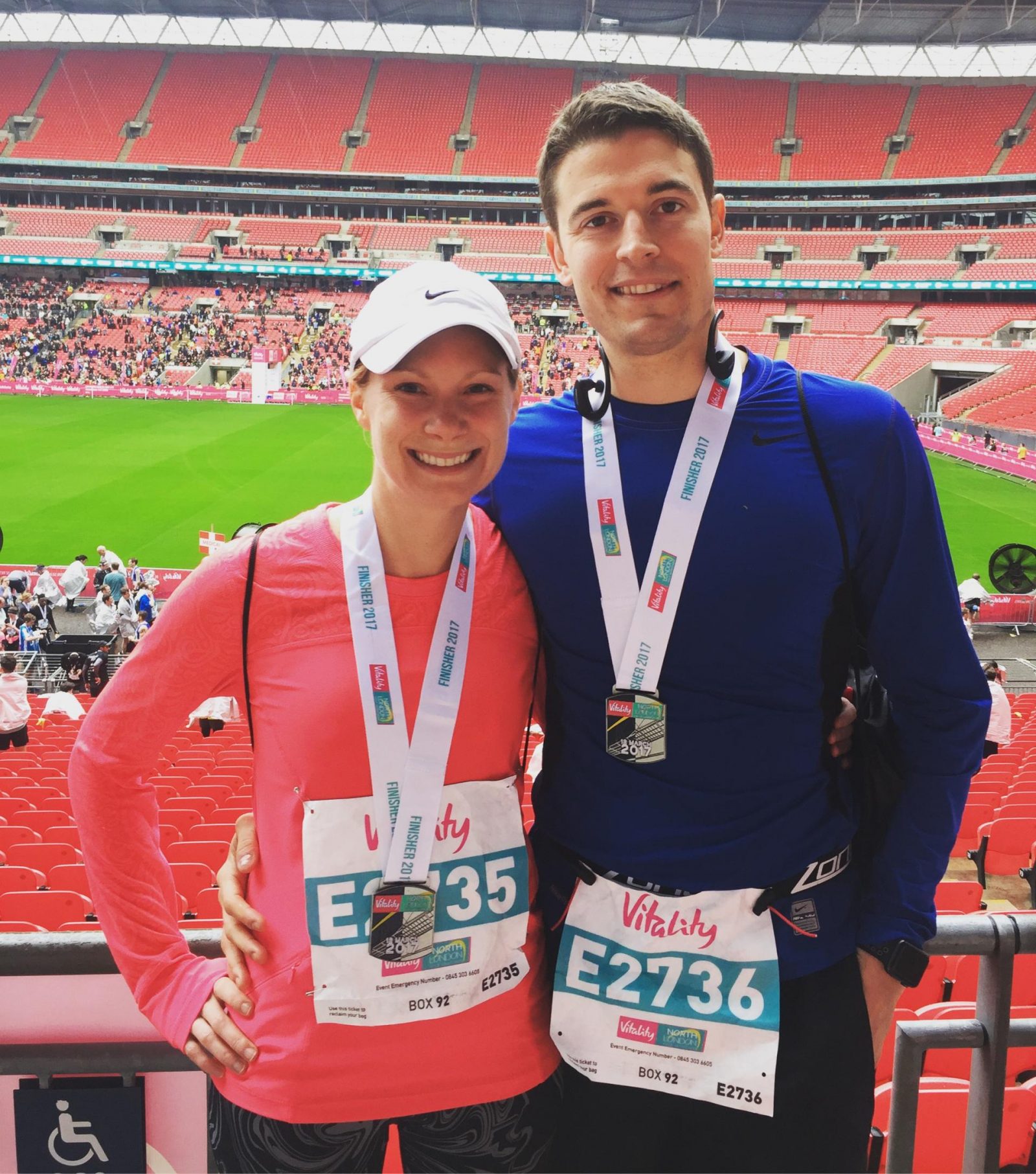 I had high hopes for a race that boasted the “best finish line in the world.” Ending inside the iconic Wembley Stadium, the North London Half Marathon boasted an epic ending for my first 13.1 of the year. And, with eight weeks of tough marathon training under my belt, my expectations were high.

That said, my runs leading up to the race were total crap. A 6:00/km pace somehow felt hard and I spent all 20km of my last long run feeling nauseous as a result of my fuel belt – something I hadn’t used in many months. The weather was also calling for heavy rain.

I tried to be optimistic and remind myself that it was just a training run. The end game is the Geneva Marathon in May after all.

The race start was at 8:30 am! That meant a very early alarm clock followed by mechanically shoving oatmeal laced with protein powder down my throat. I really hate eating breakfast at 6:00 am. My body wants only coffee at that time of day. But I can’t run a half marathon on an empty stomach so it is a necessary evil. Needless to say, I rarely enjoy my first breakfast of the day.

Wembley Stadium is a great place for a race. With ample toilets and lots of indoor space, it is the perfect place for runners to get ready and warm up before the start. We easily checked our bags, visited the loo (twice!) and got to our starting pen in plenty of time.

I only briefly managed to look at the course map and elevation chart before race day. I recalled it looked…shall we say… undulating. It was in fact, extremely hilly. Lots of steep up-hills, followed by glorious downhill stretches meant my average pace was all over the map.

The Nike app on my Apple Watch randomly turned off around 7km. Frustratingly, this seems to happen a lot. In fact, Graham said it happened to him in this race too! It is beyond annoying. I managed to turn it back on, but it meant that I had to restart my run. As a result, my average pace was a total mystery.

Undaunted, I carried on at what felt like a consistent pace. I wore my contact lenses for a first time in a long time and I was getting an extreme amount of joy out of being able to read what people’s race shirts said. Clear vision is really a wonderful thing!

At the turnaround at Allianz Park, I was feeling pretty good. That is, until I realised that the course was an out-and-back meaning I was going to have to go back up all those glorious hills I just cruised down.

The cruel, cruel race organisers put three (what felt like GIANT) hills between the 10-12 mile point of the race. And of course, this is also where I got the worst side stitch in my upper ribs. At times, I felt like I was barely moving up the hills. People were slowing to a crawl all around me like wounded soldiers. It was pure survival mode.

Finally, I saw Wembley Stadium in sight and I turned off my music in anticipation of the world’s best finish line. 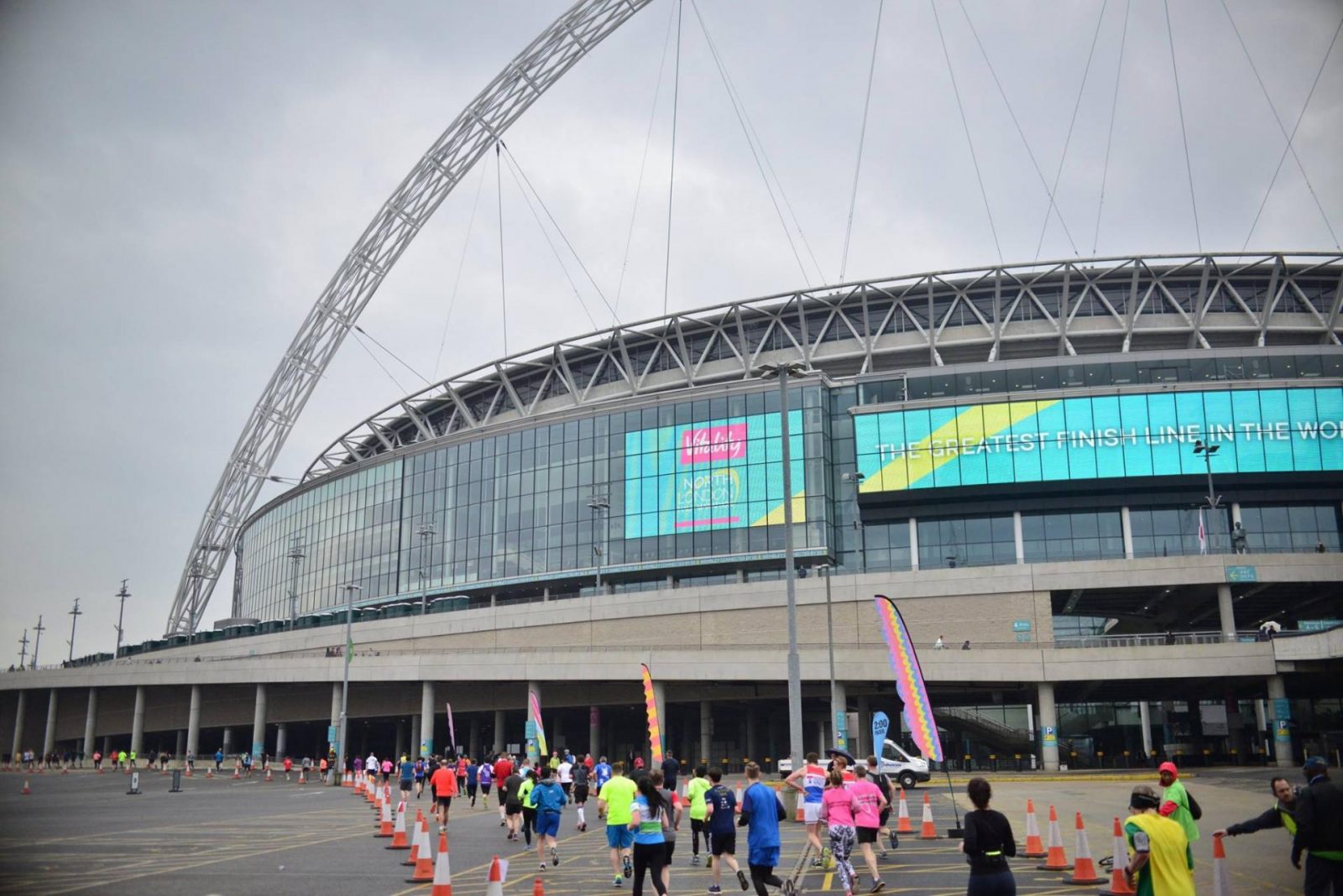 The course ran around the stadium, and weirdly, into what seemed like a parking garage, before opening up into the stadium. Complete with announcers on a loud speaker, it did have a particularly magnificent atmosphere. I picked up the pace and dashed across the finish line, overall, feeling pretty good with my performance. 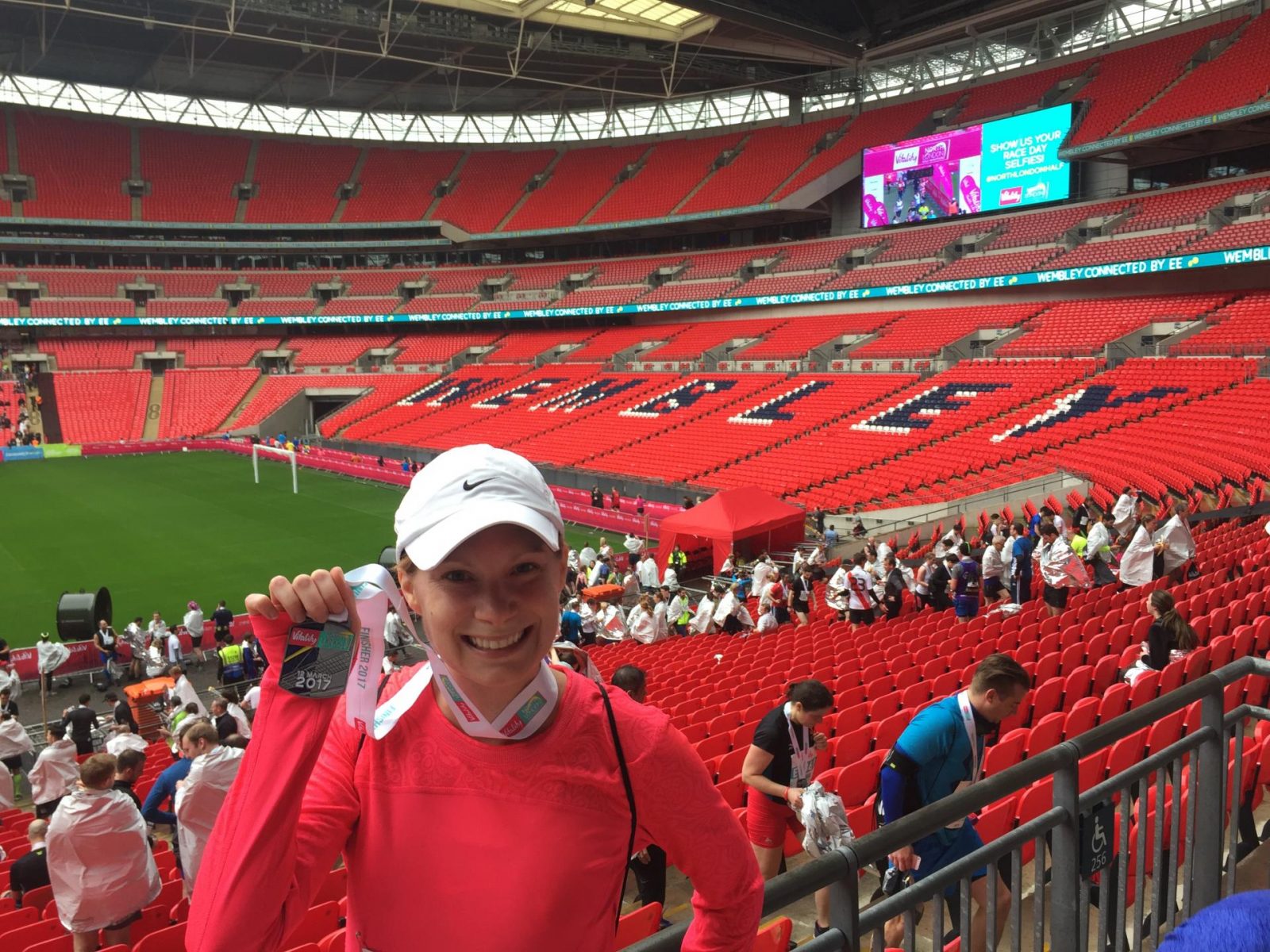 Despite the evil hills, I managed to pull off a new half marathon PB! I finished the race with a time of 1:57:39, ten seconds faster than my PB set last year at the Hampton Palace Half Marathon.

Graham also crushed his PB by several minutes, finishing in 1:47:13! His first sub-1:50 half marathon ever! I’m very proud of him. He’s really improved so dramatically over the last year.

I felt reasonably crippled after this race. My calves were absolutely killing me. (Hills, maybe?) So, once we got home, I did some foam rolling in an effort to stave off some of the inevitable muscle pain. It hurt like hell. But after suffering through a short rolling session (and making all sorts of pathetic sounds in the process), my calves definitely felt better. I could walk looking a little less Frankenstein-ish so that was a plus.

After a quick rest on the couch, we headed to Carnaby Street to meet up with friends for some jerk chicken at Rum Kitchen. 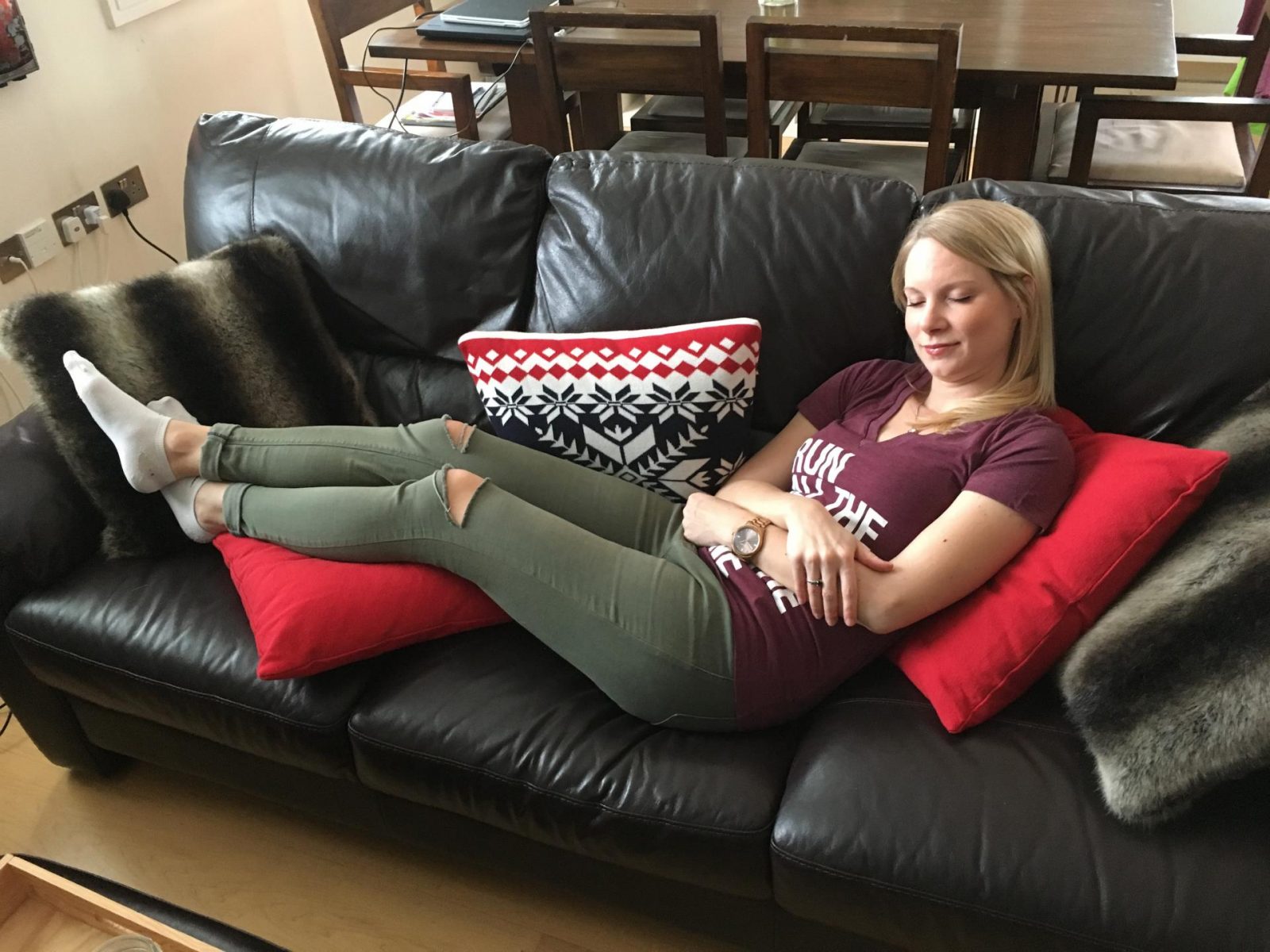 Oh, and of course, some much deserved wine. 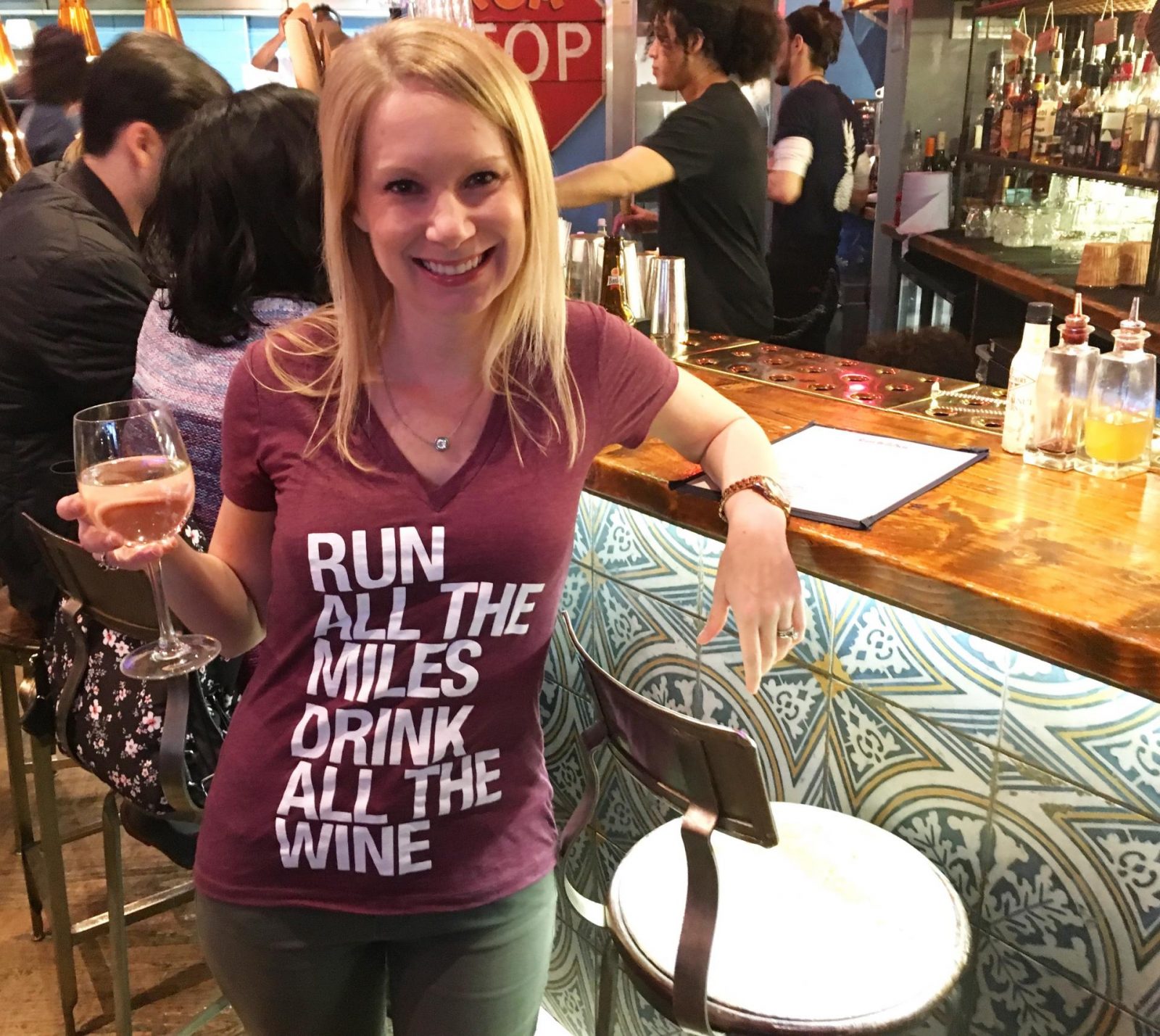 Today, I am mainly recovered, and after a short swim and sauna, I’m feeling pretty much back to normal. I feel like this race concludes Part 1 of marathon training. From here on out, it is long, long runs every weekend leading up to the big day. I feel like this is where sh*t gets real. This is where the serious training happens. But I’m feeling ready, and a new half marathon PB on a pretty difficult course was a just the confidence boost I needed. 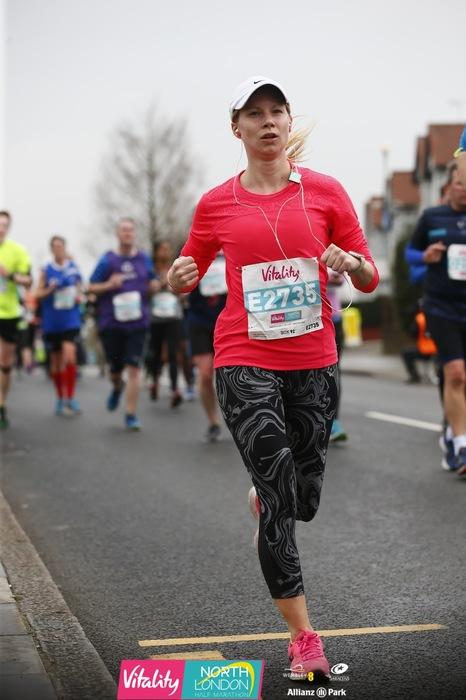 An official race pic. I actually don’t hate this one!