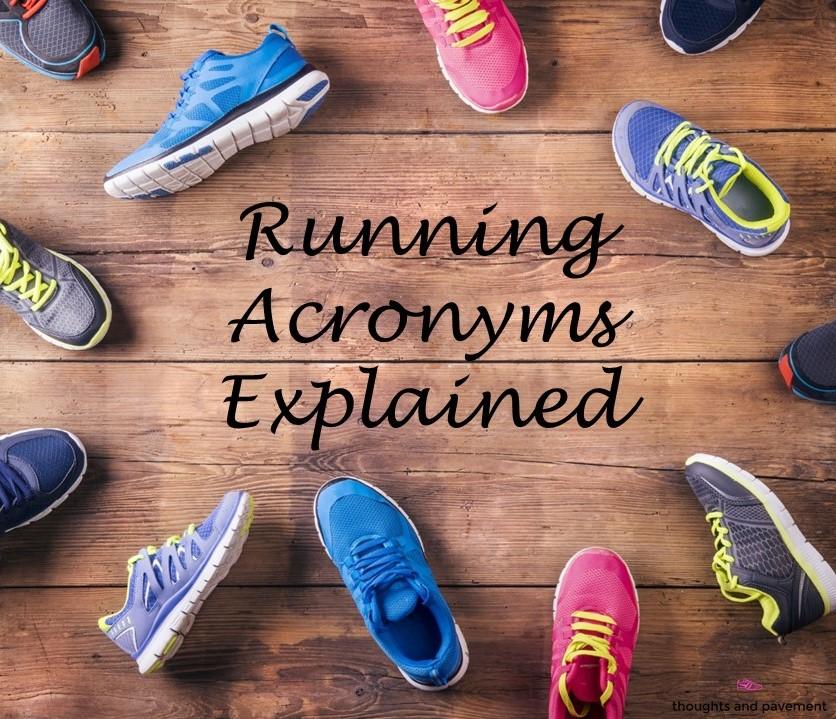 Runners speak their own language. After 6 years of running, I’d like to think I’m fluent. However, after downloading a marathon training plan and having a look through the 17-week program, my husband and I were left a little bewildered. While the plan defines each acronym, it doesn’t actually tell you what they mean. What’s the difference between an easy run and steady run, for example? What’s a threshold run and how is it different from a fartlek or interval run? I tried to make up some definitions that sounded right. If you say things assertively, people sometimes believe you, I thought. My husband eyed me suspiciously and we both knew I had no idea what I was talking about. I was going to have to do some research.

Rather than hoard this knowledge all to myself, I thought I would share it here, because I’m nice like that. Here you go: some of the most common running acronyms, explained.

ER = Easy Run: Basically, this is a run that’s easy to accomplish. But “easy” is pretty subjective. What if you’re new to this? Nothing feels easy! A nice definition I found is this: “An easy run is a continuous and sustained run at a pace that is determined in the moment by the feedback your body is giving you on the run.” So do what feels easy and don’t push yourself.

SR = Steady Run: A steady run, or sometimes called a steady-state run refers to efforts that are about 10 seconds faster to 20 seconds slower than marathon pace. It is something you can easily maintain, but it’s faster than an easy run.

TR = Threshold Run or Tempo Run: Quite simply, this is a fast pace over a prolonged period. I like to think of it as my Park Run pace. It is sometimes referred to as a “comfortably hard” pace. Runner’s World had a nice analogy. They described tempo workouts as an Oreo cookie with the warmup and cooldown as the cookie, and the run at an effort as the filling. The effort should be just outside your comfort zone – you can hear your breathing, but you’re not gasping for air. If you can talk easily, you’re doing it wrong. If you can’t talk at all, you’re above the tempo zone.

HR = Hill Run: This is pretty self-explanatory. It’s running up and down hills. Lots of training plans will include hill repeats. Find a local hill and run up and down it for the time or number of repeats listed in your plan. A 200metre hill with a gradual incline is better than a 50m super short one.

FR = Fartlek Run: I think fartlek is a stupid word. I don’t like it. But it’s a common running term that literally translates to “speed play” in Swedish. It’s a training method that includes periods of fast running in between periods of slower running. Some people liken this method to the way little kids run. Run at max speed until you can’t anymore, jog or walk it off, and do it again!

IR = Interval Run: Interval runs are short, intense efforts followed by equal or slightly longer recovery times. Unlike tempo workouts, interval runs are at your max speed, where you’re gasping for air and counting the seconds until you can stop. It’s a controlled fast effort (usually short!) followed by a very easy jog.

LR or LSD = Long Run or Long Slow Distance Run: This is any run that is longer than your weekly runs. They usually build in distance week over week, and they are considered the foundation of marathon or half marathon training. These workouts help build endurance and mental toughness. They should be at a slow pace. It’s about covering the distance, not speed.

MP = Marathon Pace: This is the pace that you plan to run your marathon at. If you’ve never run a marathon before, check out this training pace calculator to help you out.

HMP = Half Marathon Pace: Same as above. Usually this is faster than your marathon pace.

If I missed any, or you have a better, more straightforward definition, please feel free to leave me a comment! Otherwise, hopefully you found this as informative as I did. HT!

(I just made that up. It means Happy Training.)

For more running definitions, check out The Ultimate Guide to Running Lingo.