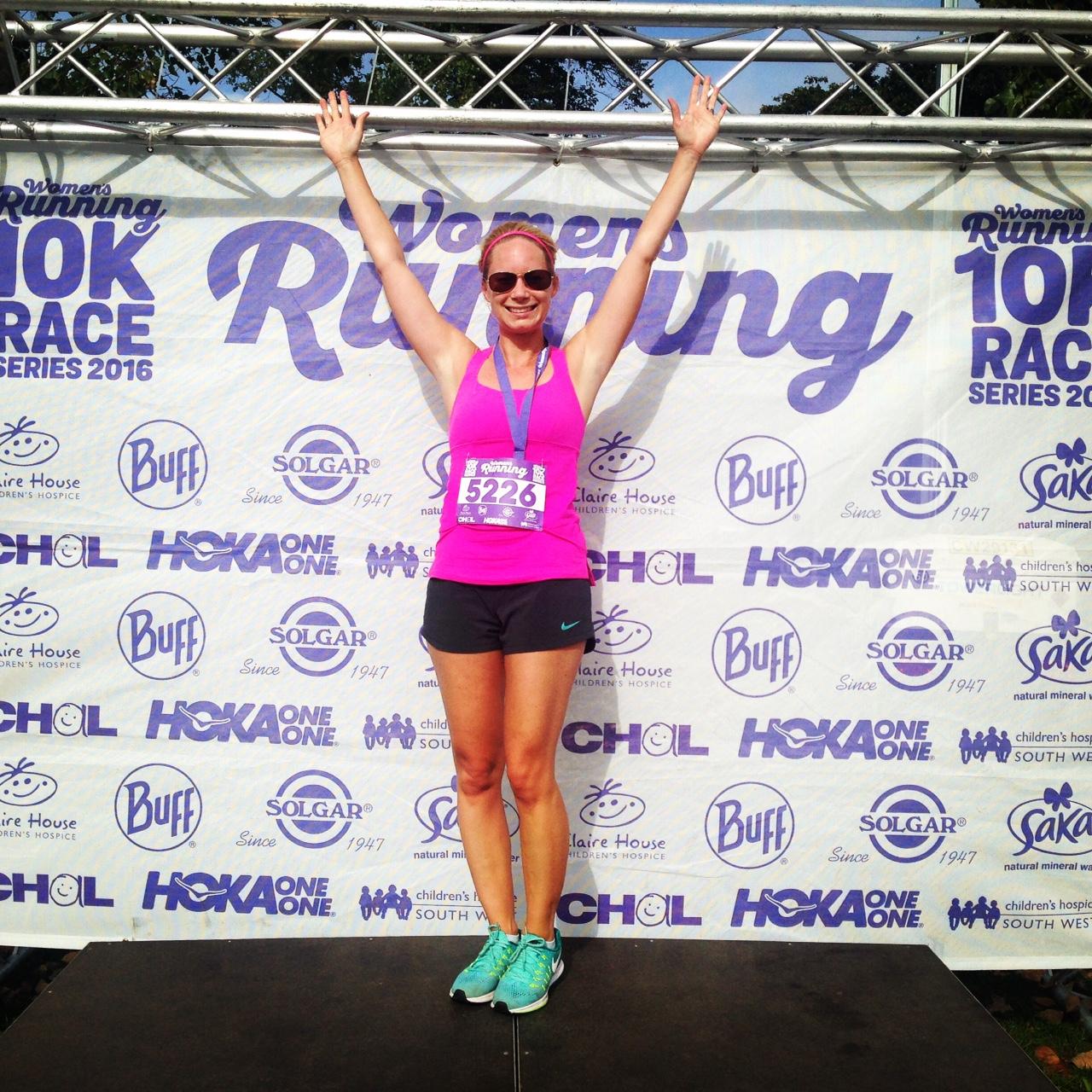 Last weekend, while travelling to Oktoberfest in Munich, I picked up that latest version of Women’s Running magazine in the airport. In it, I read that there would be a 10K race in Finsbury Park the following weekend. Throughout the weekend, while guzzling many litres of beer, donned in my fines dirndl, I thought about signing up. On Monday, feeling a bit guilty from a weekend of carb-loading (read: eating pretzels larger than my face), I signed up. 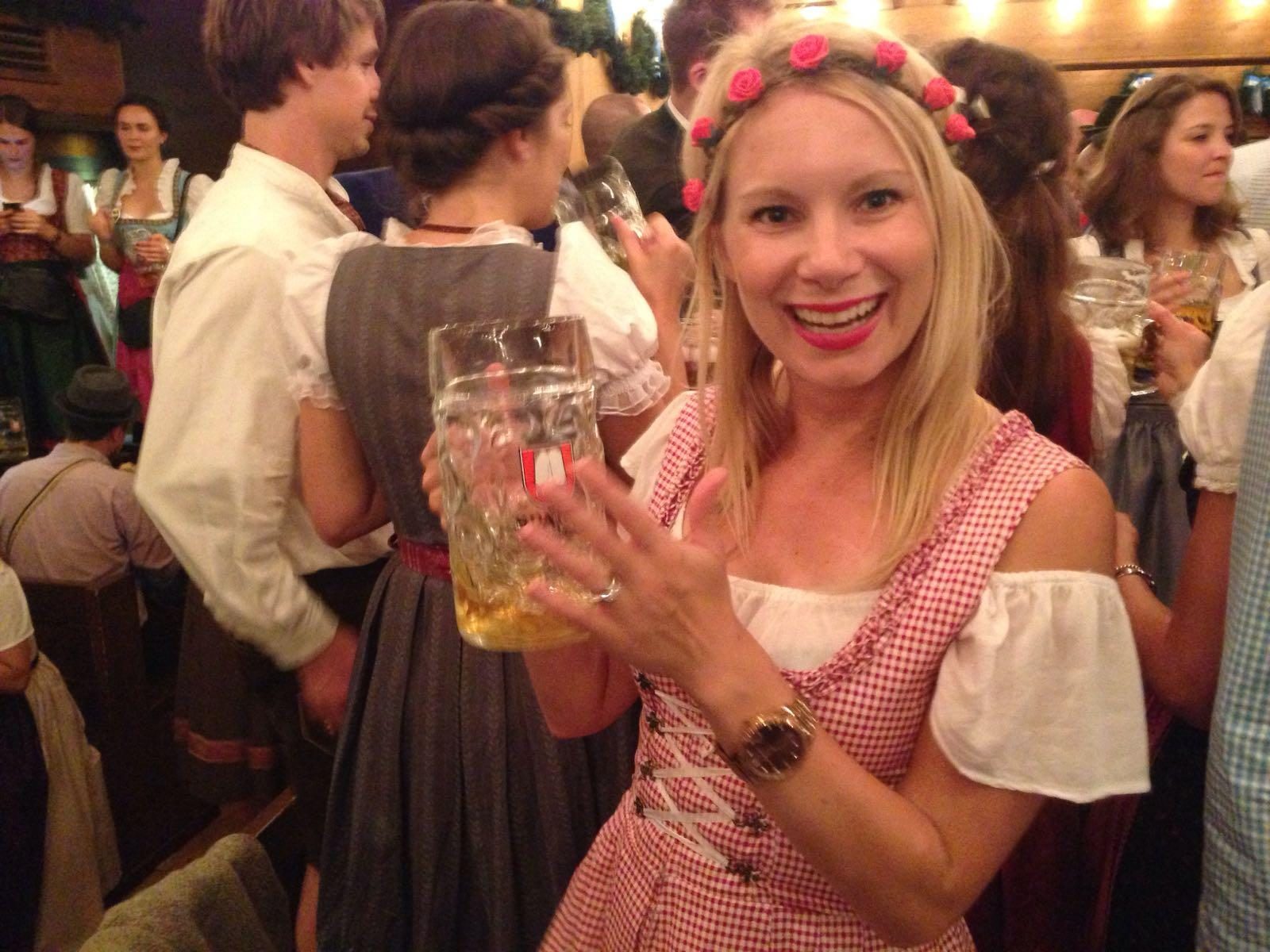 It may not look like it, but in this picture, I’m thinking about signing up for the Women’s Running 10K.

I love 10K races. I think they are my favourite distance. I was excited for the run. I’ve done this so many times now, that I don’t really even fret about the preparation anymore. I didn’t lay anything out the night before. Just got up, dressed, ate breakfast and got an Uber to the start line. The weather forecast called for sun. It looked like rain. I optimistically wore shorts and sunglasses.

The second I walked out of my flat, it started to pour! Good thing I also grabbed an umbrella right before dashing out the door.

Luckily, the rain subsided shortly thereafter, and I managed to stay dry pre-race. It was a small event, but with a friendly and enthusiastic atmosphere. There was a large line for the bag check and the start time was quickly approaching. I thought it was nice that the event MC made a point of saying several times not to panic and that they wouldn’t start the race without anyone. 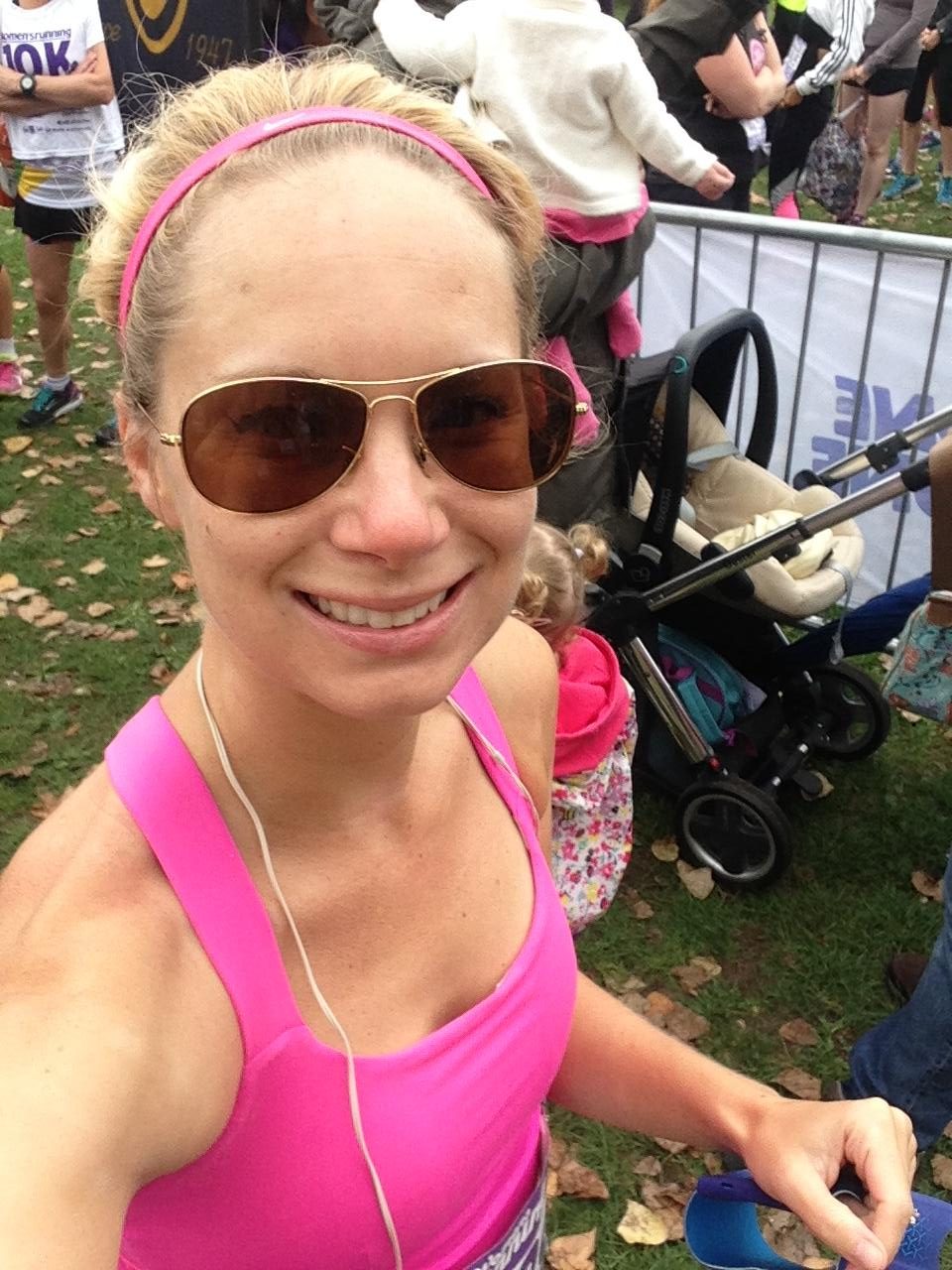 Waiting for the race to start…

I didn’t do any prep for this race. I didn’t even look up the race route or the elevation. I feel like I read somewhere that it was flat. I didn’t really recall Finsbury Park being particularly flat, but I had somehow convinced myself that it would be an easy run with very little inclines to bother me.

It was not flat. The race was two 5K loops, and each loop had four very noticeable hills. It was tough! And I was not mentally prepared for the challenge. Especially because I shot off the starting line like I was running a mile sprint and immediately tired myself out. Despite the fact that I told myself 200 times that I was just going run happily and not worry about time, I did what I always do and got competitive with myself.

But all it took was that first hill to get my ego in check. I had to slow down or I was never going to make it round the course the second time. Soon after, I fell into a strong and steady pace of about 5:40/km and I felt pretty good throughout. And just as the sun started to actually come out, I crossed the finish line with a chip time of 56:50. I was 74th out of 311 runners. 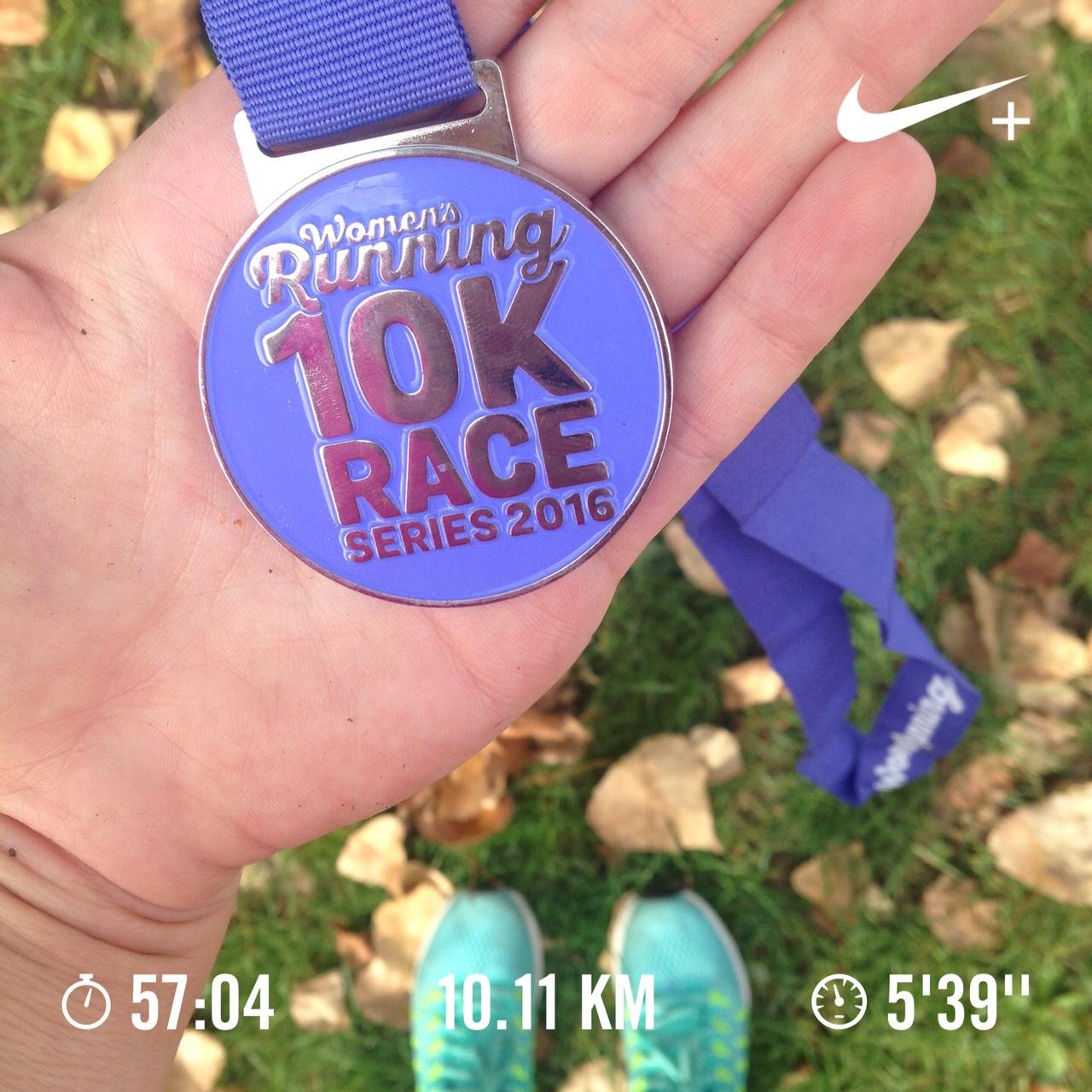 Definitely not my best time, but I’m pretty proud of the result because… THOSE HILLS!

After the race, I was handed about 67 different things – a bottle of water, a medal, a tshirt, a huge goody bag and a bag from Buff, one of the sponsors. I felt like I had just gone trick-or-treating. I went to the grass to stretch and take a few pictures before heading home.

Let me just say, this goodie bag may be one of the best I’ve ever received! Check out this haul: 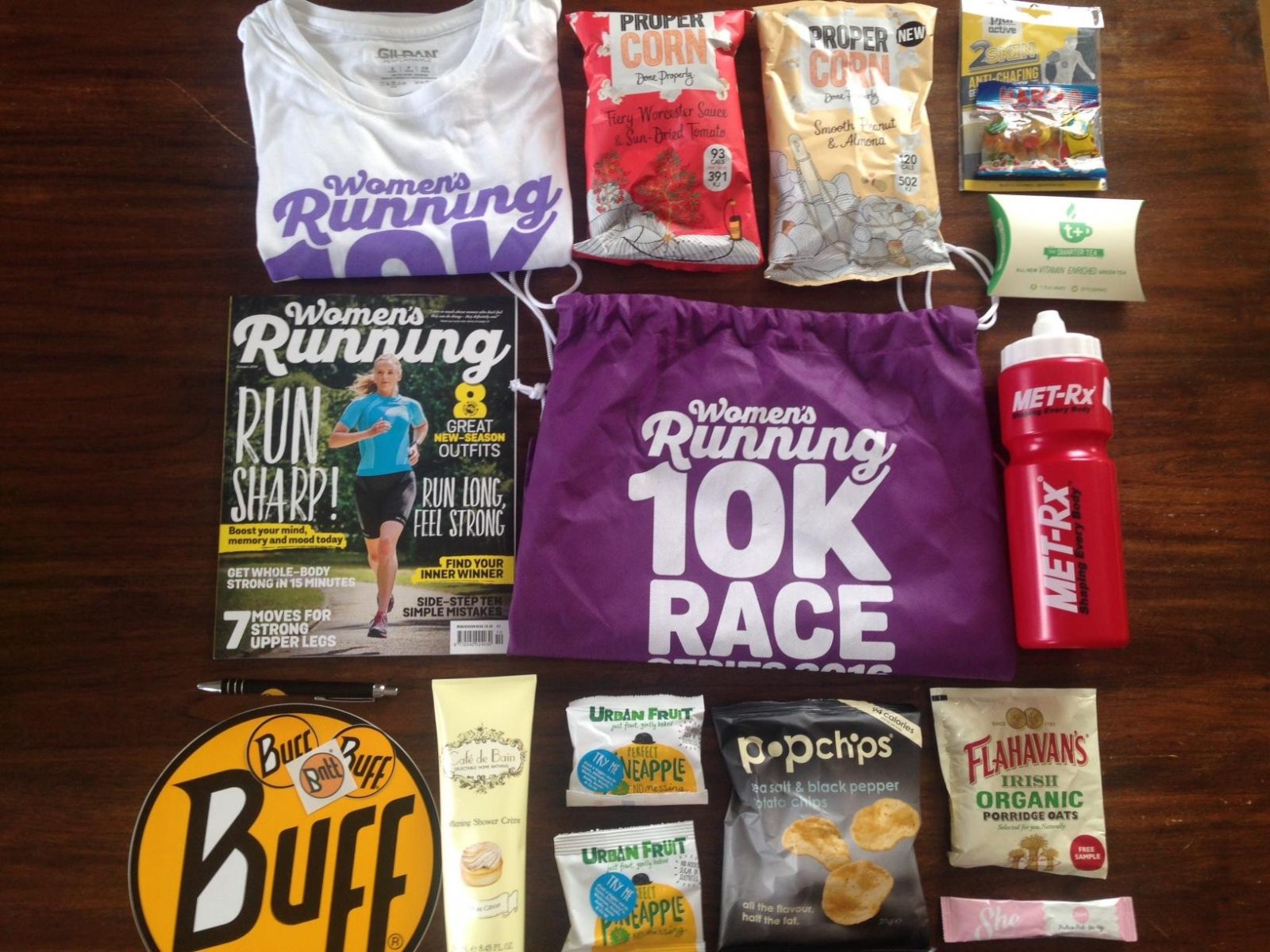 I had to exercise extreme self control to not eat anything before I took this pic!

Big thanks to Women’s Running for hosting such a friendly, encouraging event. It was a great race, and I was inspired by all the first-time runners taking on their first 5 or 10K challenges.

I’ll definitely be back next year.