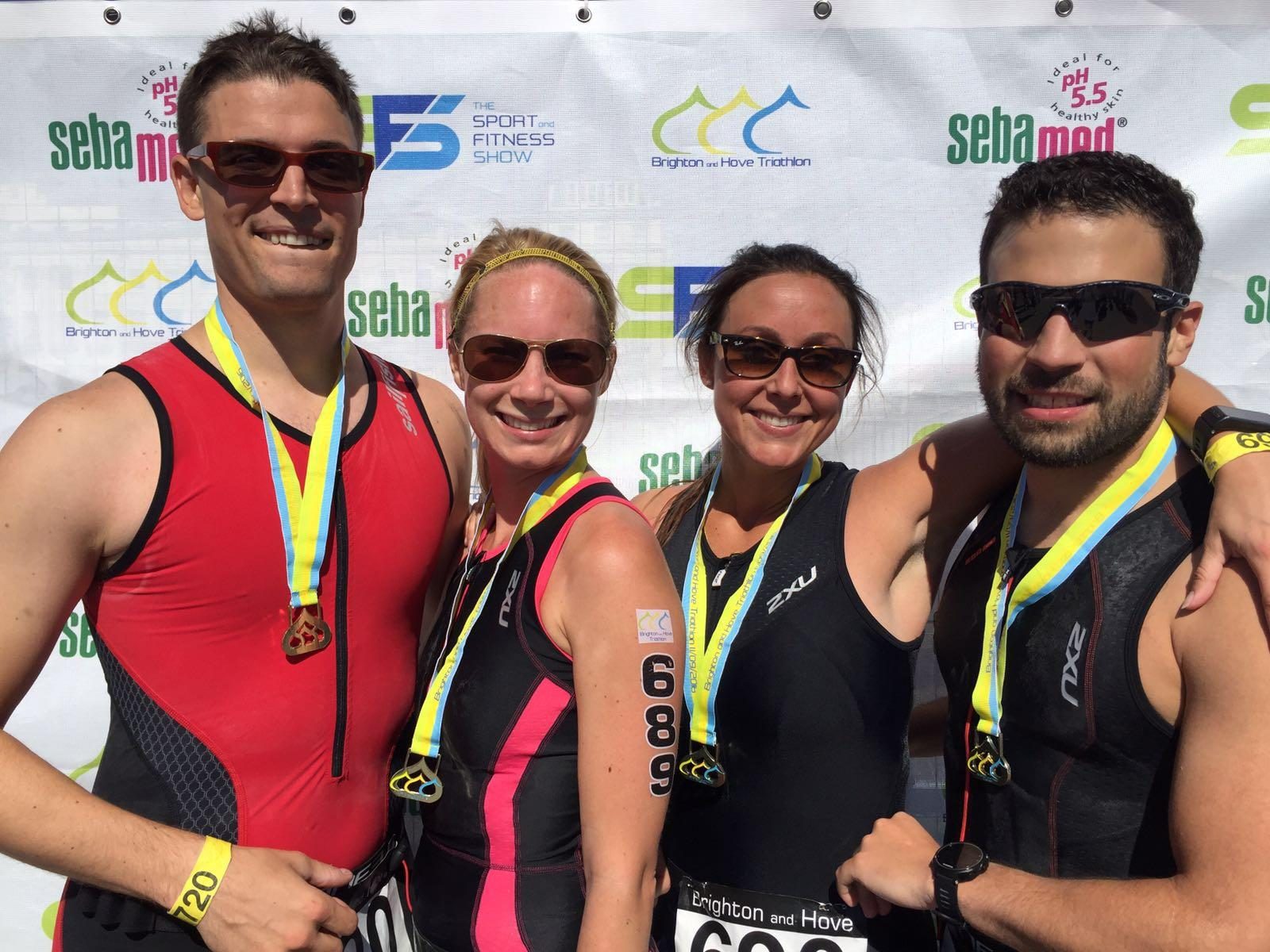 On Sunday, I completed my second sprint distance triathlon! Who would have thought, just 5 weeks after my first triathlon, I was back in my wetsuit and ready to line up at the starting line of another race. It was another great accomplishment, but a different challenge from the first. Turns out swimming in the sea is really hard!

The Brighton and Hove Triathlon took place on the lovely Brighton seafront. Having never been to Brighton, it was a great opportunity to see the city, made even better because our friends were on board for the weekend event as well. Yay for friends who like races!

When we arrived in Brighton on Saturday, the weather was pretty grim. Cold, rainy and windy. We killed time in a bar by eating nachos and having a conservative pint of beer – clearly the same tactic used by all elite triathletes, right? We went to look at the sea and it was menacing. If the waves stayed as they were, I would have surely drown. Well, actually, the more likely outcome was that the race would be reduced to a duathlon. Neither option was ideal.

Luckily, the weather forecast did not disappoint and we woke up to an absolutely perfect day on Sunday. Blue skies, warm temperatures and a (reasonably) calm sea. 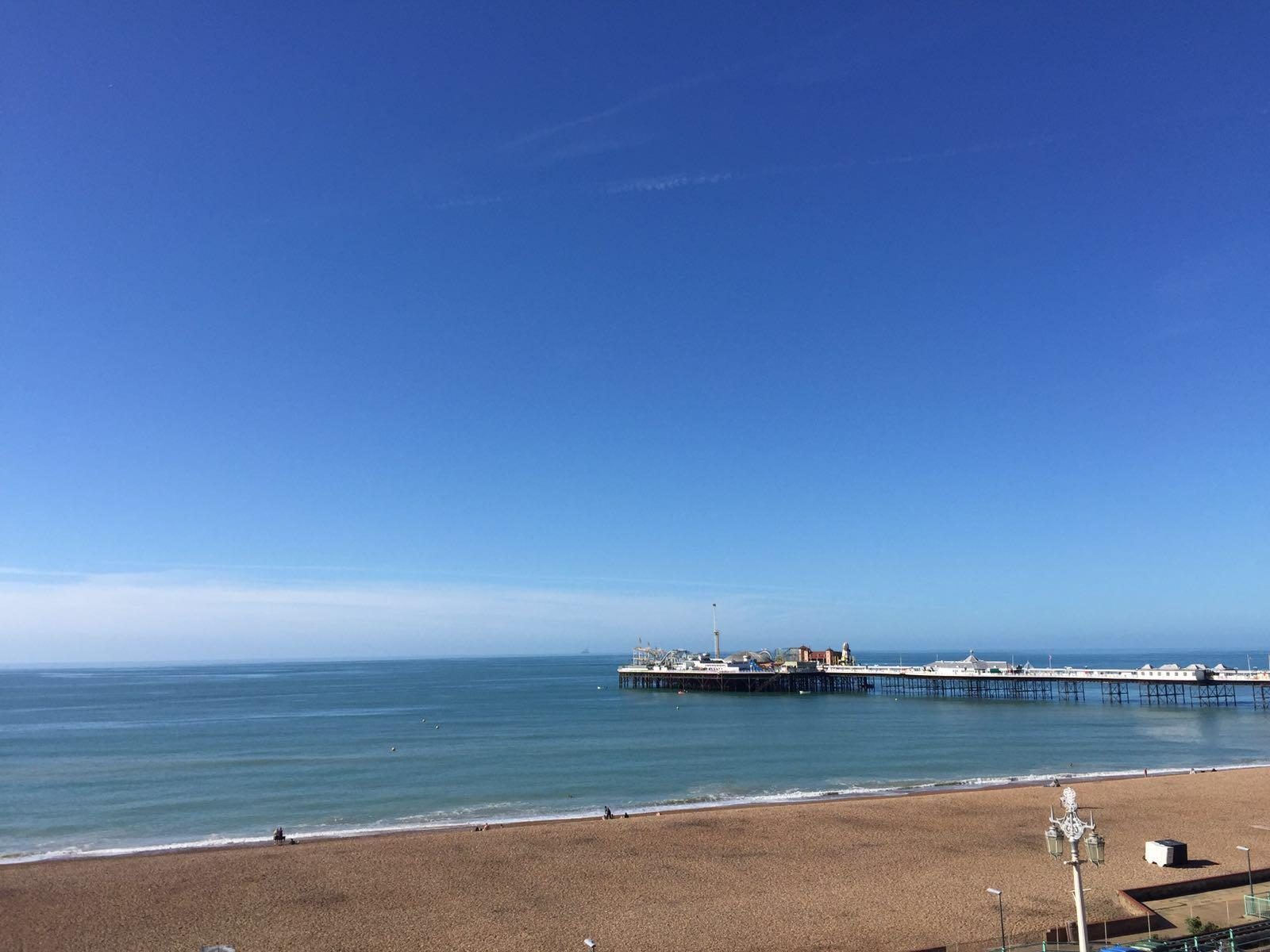 I mean, could we have had a better day?!

As usual, I wrestled with my wetsuit a bit. Seriously, if anyone has any tips for how not to put fingernail holes in their wetsuit, I’m all ears. I cut my nails much shorter than I would like, and I use a plastic bag to slide my arms and feet into the suit more easily. And to top it off, I also wear thin gloves to pull it on so I don’t puncture it even more. The result is that I look ridiculous…but my wetsuit stays in one piece. 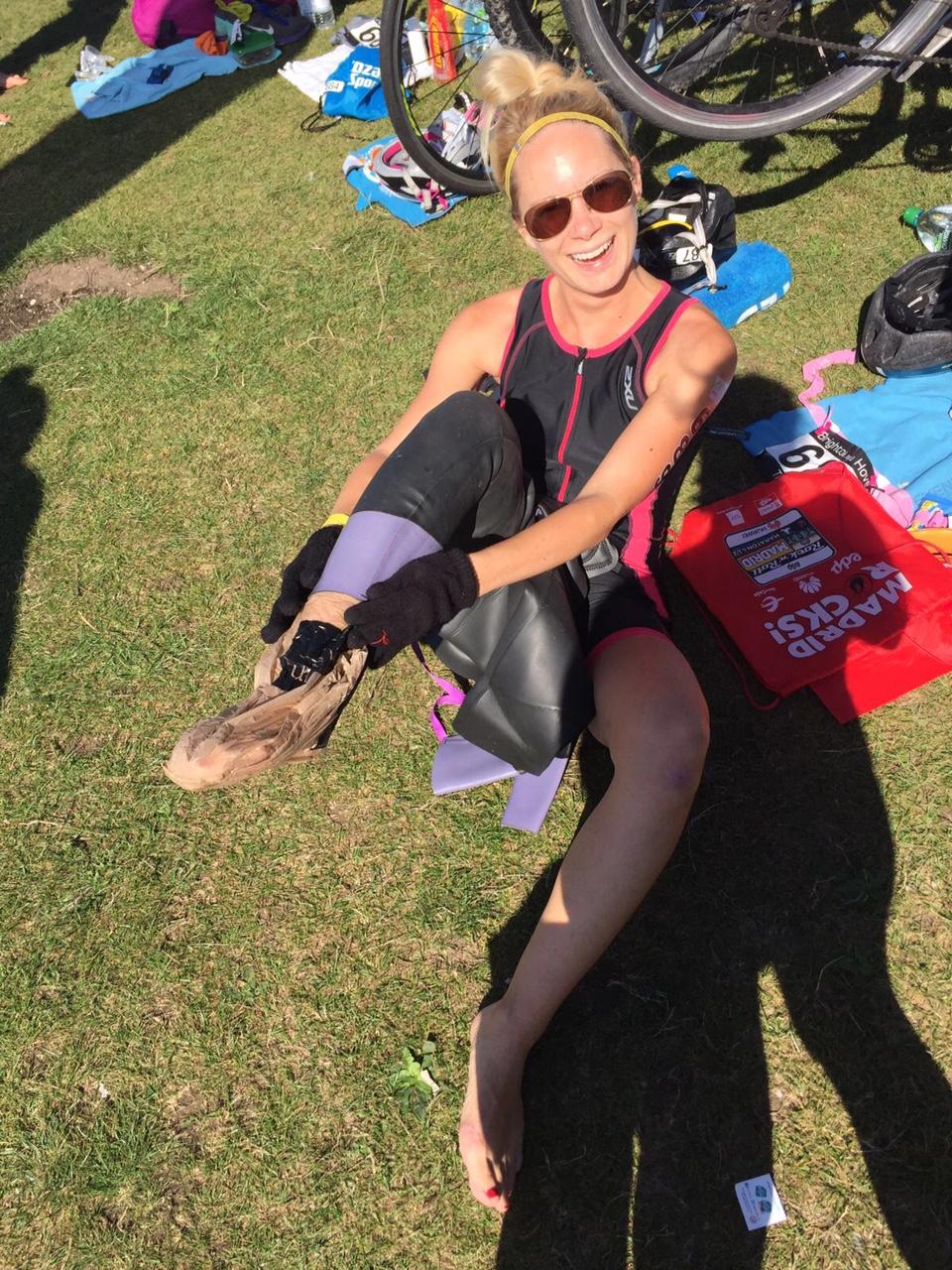 Don’t mind the weirdness of my shoulder muscle. I swear that is a shadow or something. My arm doesn’t usually look like that!

Eventually, we were ready to go. 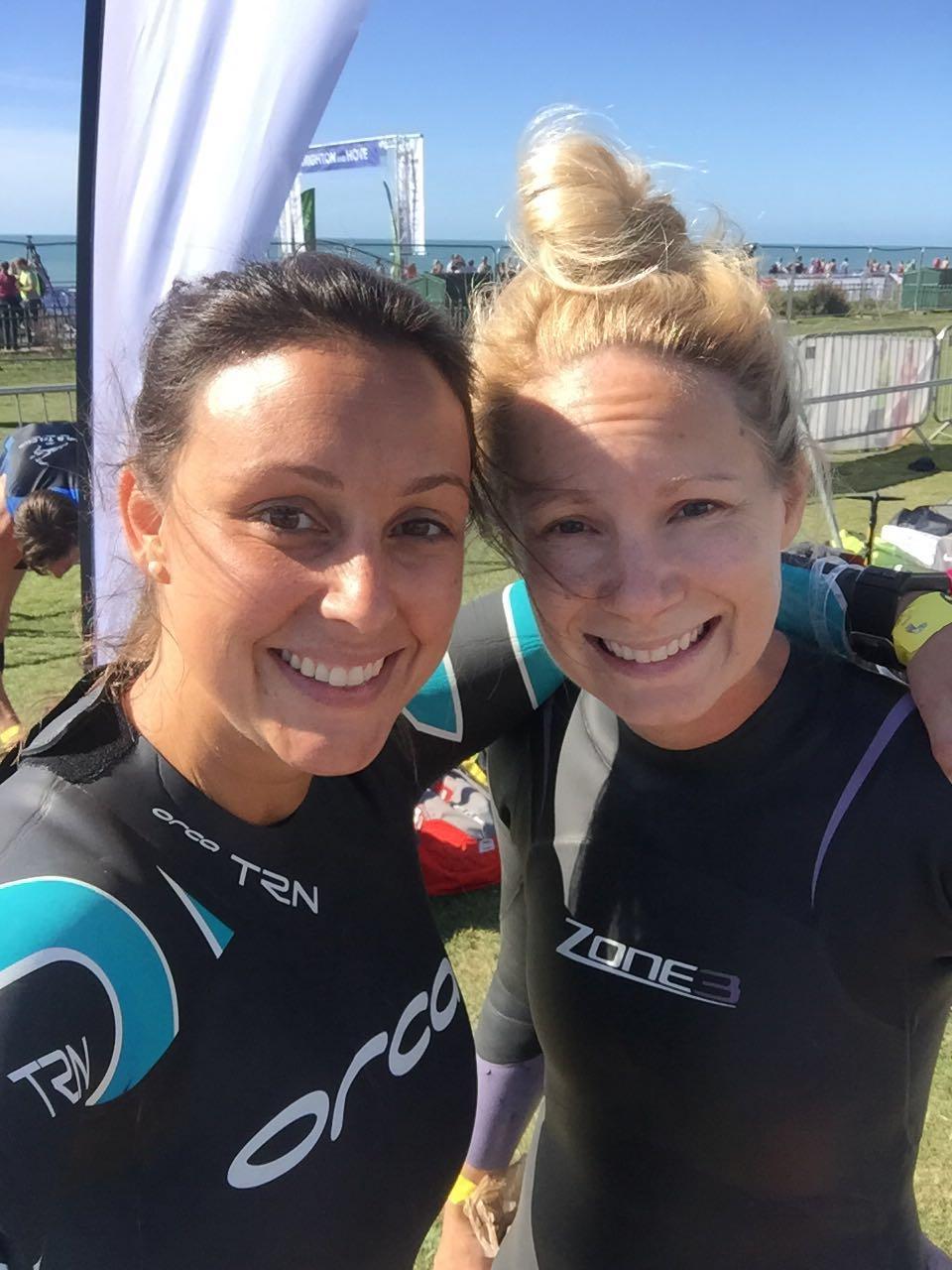 After practicing my sea swimming while on holiday last month, I was feeling pretty confident. 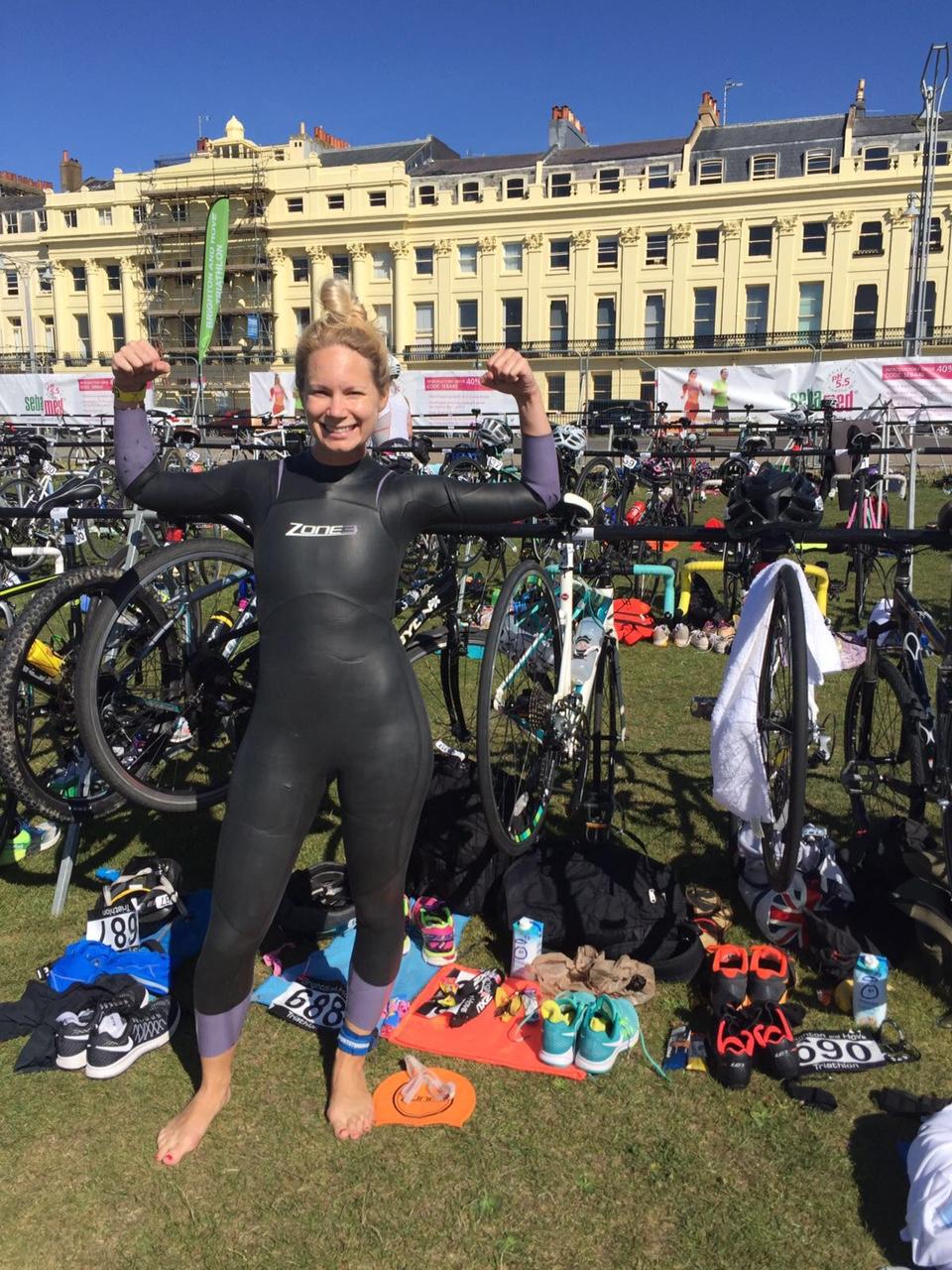 Successfully in the wetsuit, ready to go.

So we headed across the pebbly beach to the water. This race was different than last month’s London Triathlon because we started from the shore and ran in. I have to admit, I didn’t like it as much as the in-water start in The London Triathlon. There, I had time to float and get all zen and comfy in the water before we started. This time, I barely had time to frolic in the water for 60 seconds to get my suit wet before they blew the starting horn. Even though I said I would take it slow, I still ran in and started swimming at a furious pace. I got a bit winded and then a bit panicked. I had to slow down and do some calming breast stroke before I could get back into a front crawl again. The consequence was a very long swim for me. 27 minutes and 47 seconds! (Compared to my 19 minute swim time in The London Triathlon)

BUT there’s a silver lining. There was some debate after the race that the swim course was long. Graham’s watch said it was closer to 900 meters (not the 750 meters it is meant to be). And today: VALIDATION. The race organizers sent out an email with the following message:

The swim course on every distance was longer than advertised. We will ensure that next year’s course will be accurate. We would like to offer our sincere apologies to all our swimmers and a special well done to all the first timers!

I KNEW IT. I just knew it. It felt so long. So endlessly and horribly long. There were times where I actually felt like I was making negative progress. The acknowledgement that the course was long was very comforting information. So, who knows. Maybe it wasn’t such a bad swim for me after all. Anyway, after that disappointing start, I had some serious time to make up. 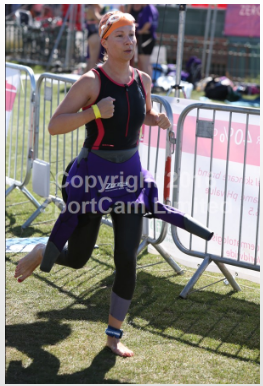 I didn’t even recognize this pic as myself at first! (This is the only pic I will steal. I promise!)

The bike was decent for me. I managed a pace slightly faster than last time, shaving about a minute off my time for 20k. It was a bit of a boring route, but it went by quickly. I passed by Graham and our friends numerous times. Hard to miss the boys when they were lapping me!

My transitions were blazing fast. Minutes less than last time. I was easily climbing up the ranks with each event. After the swim I was in 254th place. By the time the run started, I had clawed my way back to 214th.

I am so glad triathlons end with the running part. This is the part I feel good at. The part I know. And it’s always a motivator for me because even though I’m running at a slow-ish pace (In this case, about 5:50/km), I am still passing people like crazy. Such an ego boost. By the end of the run, I was in 210th place. Take that, crappy swim time!

I crossed the finish line in 1:48:43, about a minute slower than my last triathlon. 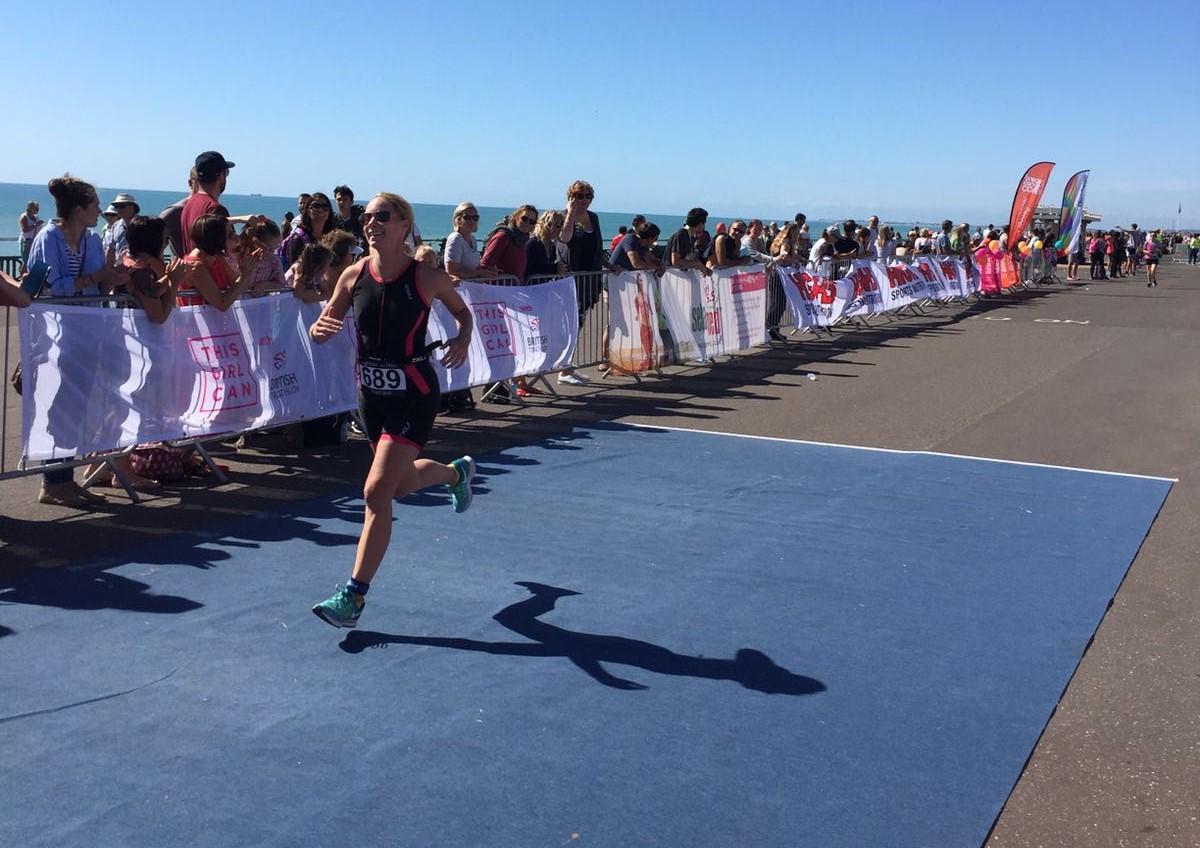 One of the benefits of being last of your group of friends to finish a race is that they take great pics of you, like this!

But all things considered, I’m pretty happy with that. With the exception of the swim, every single disicpline was faster than my last triathlon.

After a few obligatory photos to commemorate our awesomeness, we went in search of food and drink. 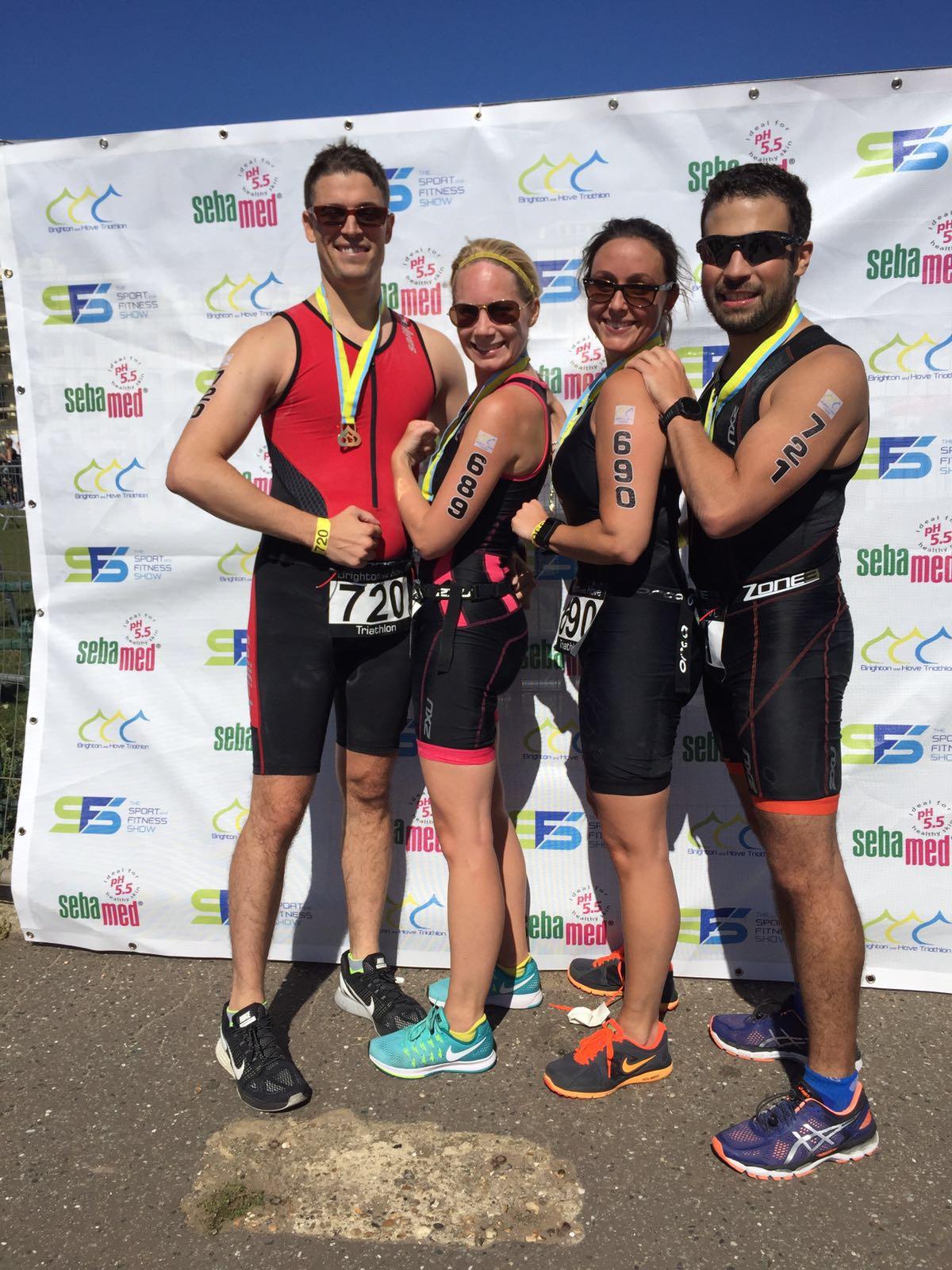 We enjoyed a nice beer, and some (healthy?) corn at the race event. 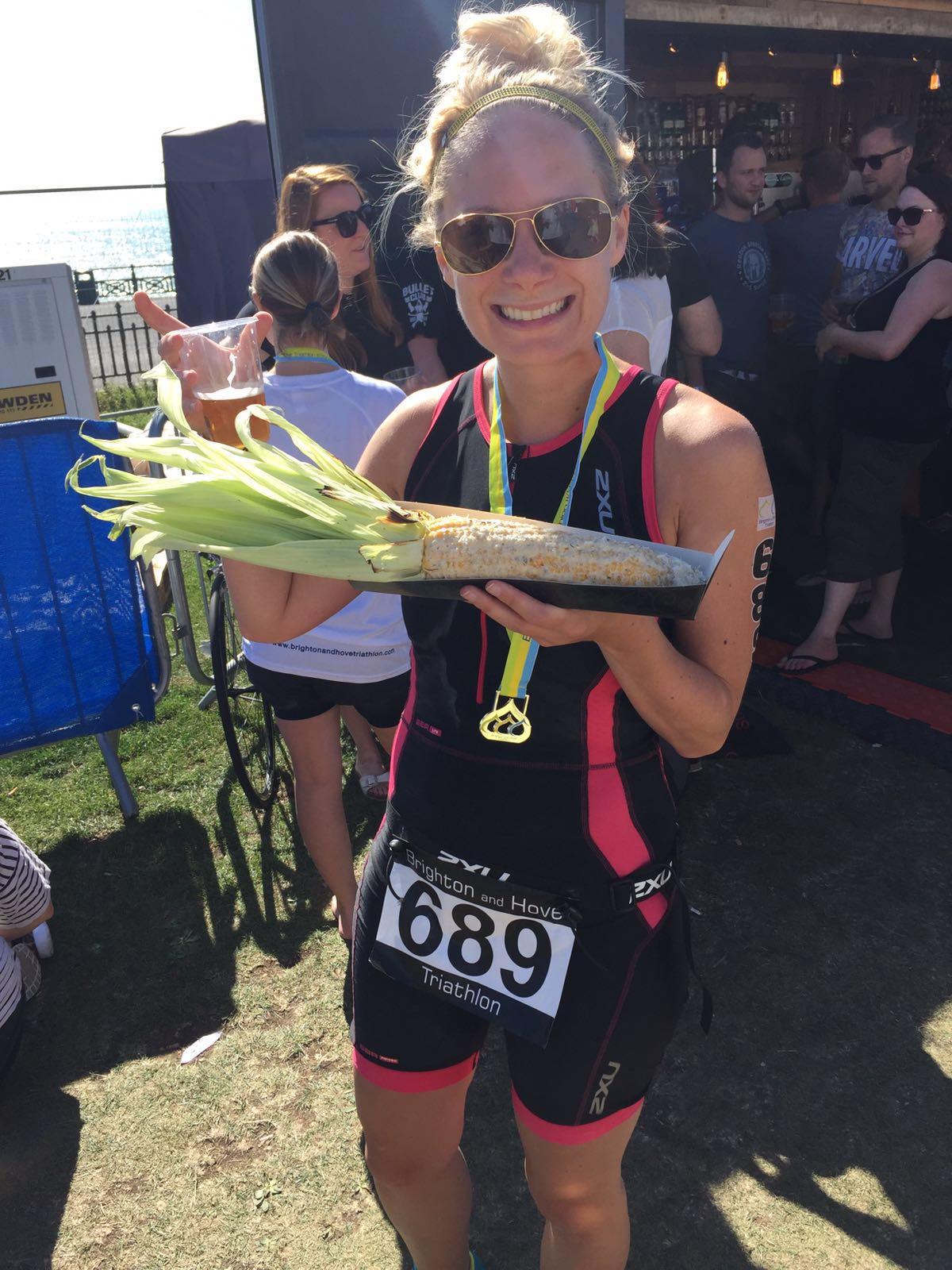 And we found a nice patio where we drank a few bottles of wine, listened to some fun live music and refuelled with some fish. 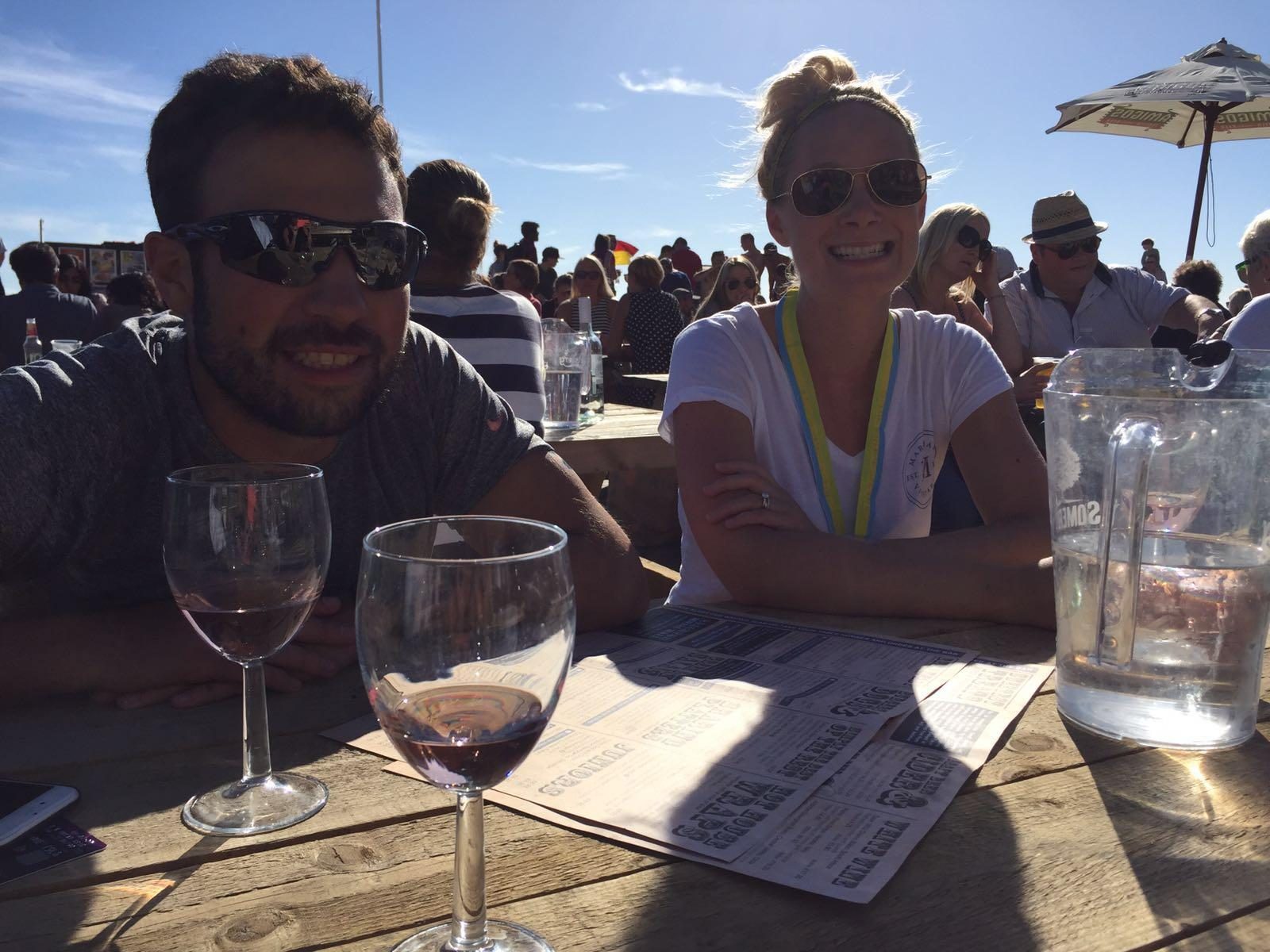 Like any race, we came home with some souvenirs. Some random stuff from the race expo, a medal and in this case, our race numbers forever sunburned into our arms. The race gave out temporary tattoos of your race number to put on your arm and after a day in the sunshine, we now all have a semi-permanent reminder of our really fun day! 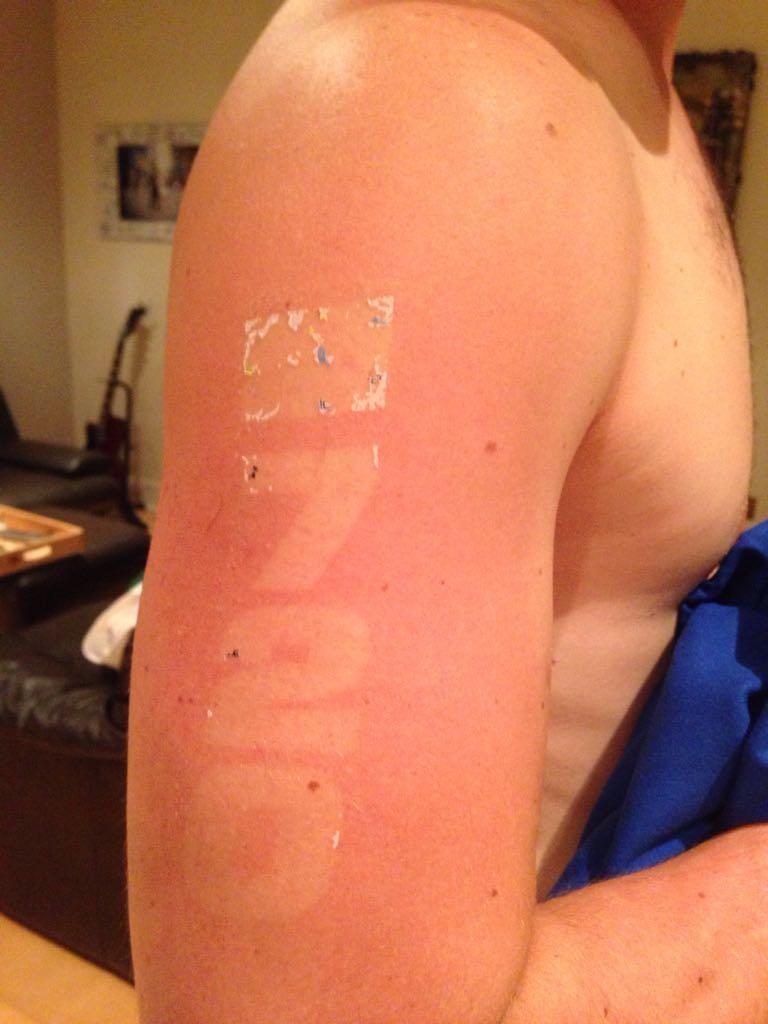 Hah! Let this be your PSA for always bringing/wearing sunscreen!

A super fun weekend overall. A big shout-out to the organizers. This was the first time for this inaugural event and despite the distance miscalculation, everything else as pretty flawless. No complaints, and we couldn’t have had a better day.

Finally, huge congrats to Caine, Clare and Graham who all crushed it. I’m glad people like doing these things with me. Looking forward to the next one! 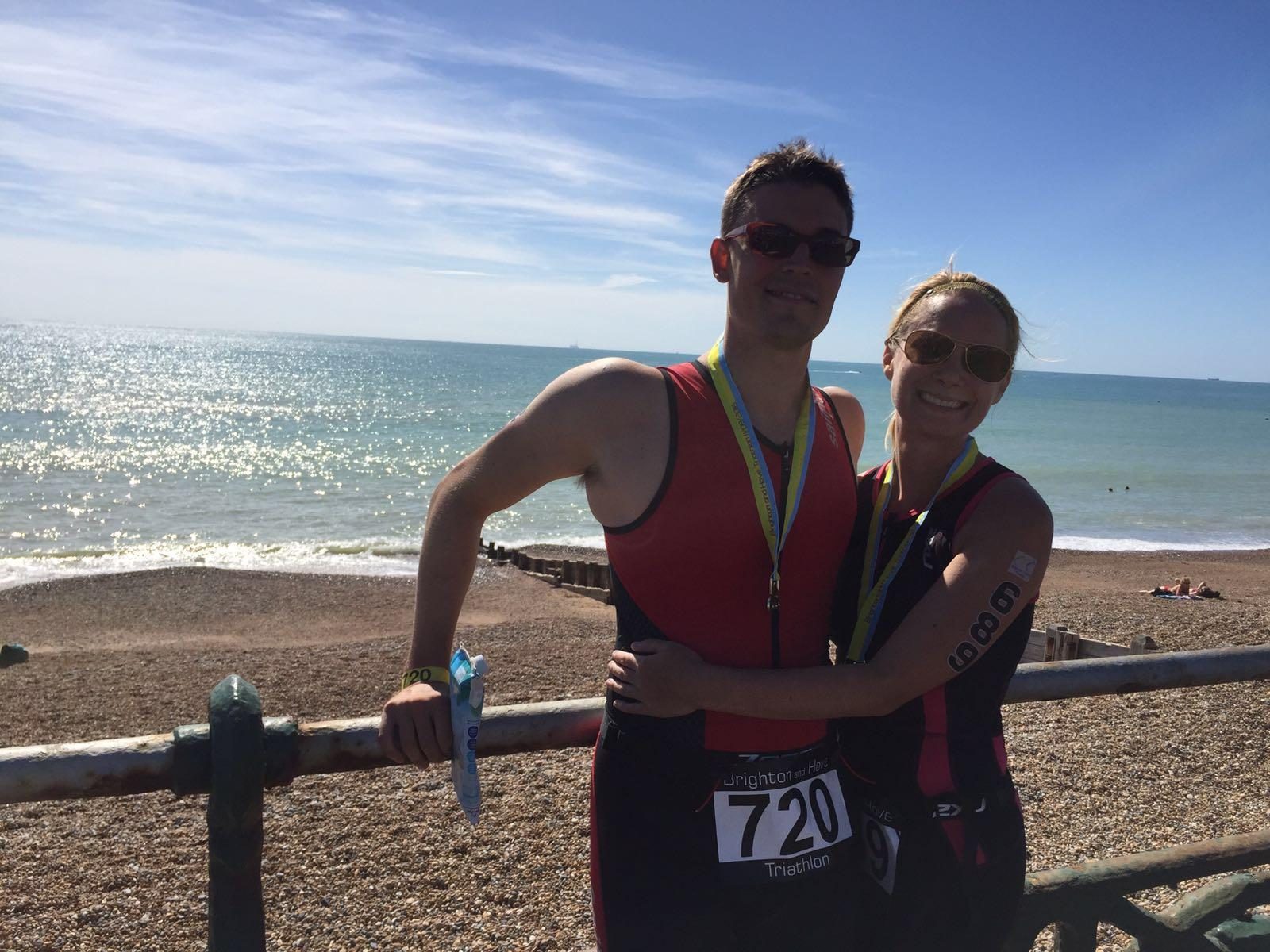