On Saturday, I completed my first ever triathlon! The AJ Bell London Triathlon proved to be the perfect event for my first foray into the world of the tri. It’s the world’s largest triathlon and London’s only major triathlon in 2016. I swam. I biked. I ran. It was awesome! What a great race!

The day before the event, I obediently read the race information only to discover there were some critical pieces of kit that I did not own, including a race belt and water bottle that could fit on my bike. Whoops. The race belt was a critical time saver as you have to wear your bib on your back for the bike and your front for the run. If it was pinned, like it normally is in my road races, it would take minutes to change so the belt was key for quick transitions.

So, on Friday after work, I headed to Cycle Surgery to pick up the items I needed. While there, I started looking at triathlon suits, and somewhat impulsively, decided that I needed one too. I mean, I’ve come this far. I might as well look the part. And besides, I looked like a superhero in it. I’m a firm believer that if you look powerful, you act powerful.

I was excited on Saturday morning, and the perfect blue sky and sunshine actually made the water look inviting instead of menacing. The only downside was that my race didn’t start until 3:10 in the afternoon, so I had a lot of time to kill before jumping in. Luckily, my husband Graham and our two friends, Caine and Kyle, were doing the Olympic distance triathlon which started at 11, so we got to watch their entire race before I had to head to the swim assembly. 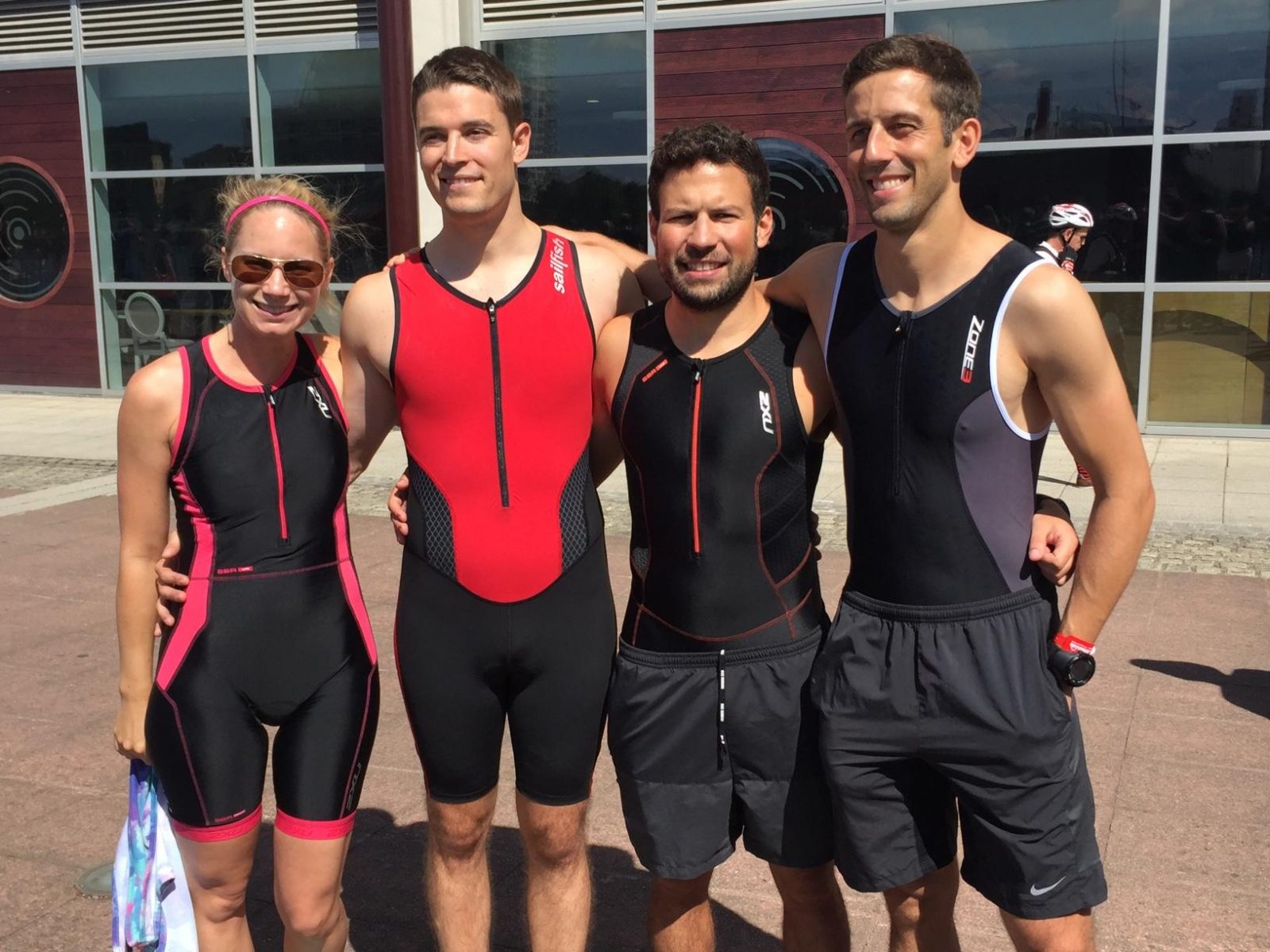 Tri-suit party! Don’t mind the weirdness of my crotch in this pic. haha

It was great watching the race for so long. I felt totally prepared and motivated. I knew exactly where to go and what to do. I watched what other people did in an effort to copy their technique and set-ups. And after watching many swim waves start, I felt reasonably assured that I wouldn’t be the worst swimmer in my wave. So we passed the time by cheering enthusiastically for Graham and friends. 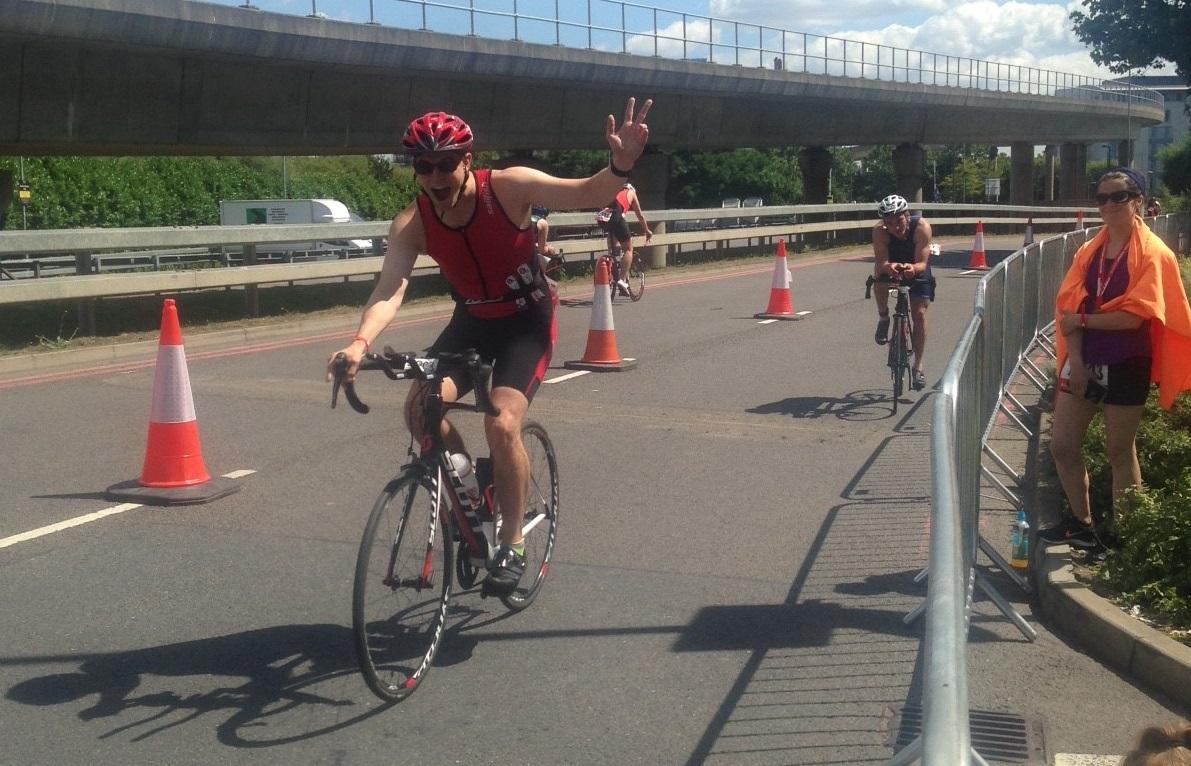 Graham is having way too much fun!

Unfortunately, 5 hours is a long time to wait around, and I started to get a bit anxious. I was also standing in the hot sun for hours, and worried that I would be dehydrated and lethargic. I hid in the shade for the last hour or so as we watched the run part of the Olympic distance race. It was HOT. People were really struggling, but all three guys finished in fine form with great times. So proud of them! What an accomplishment! 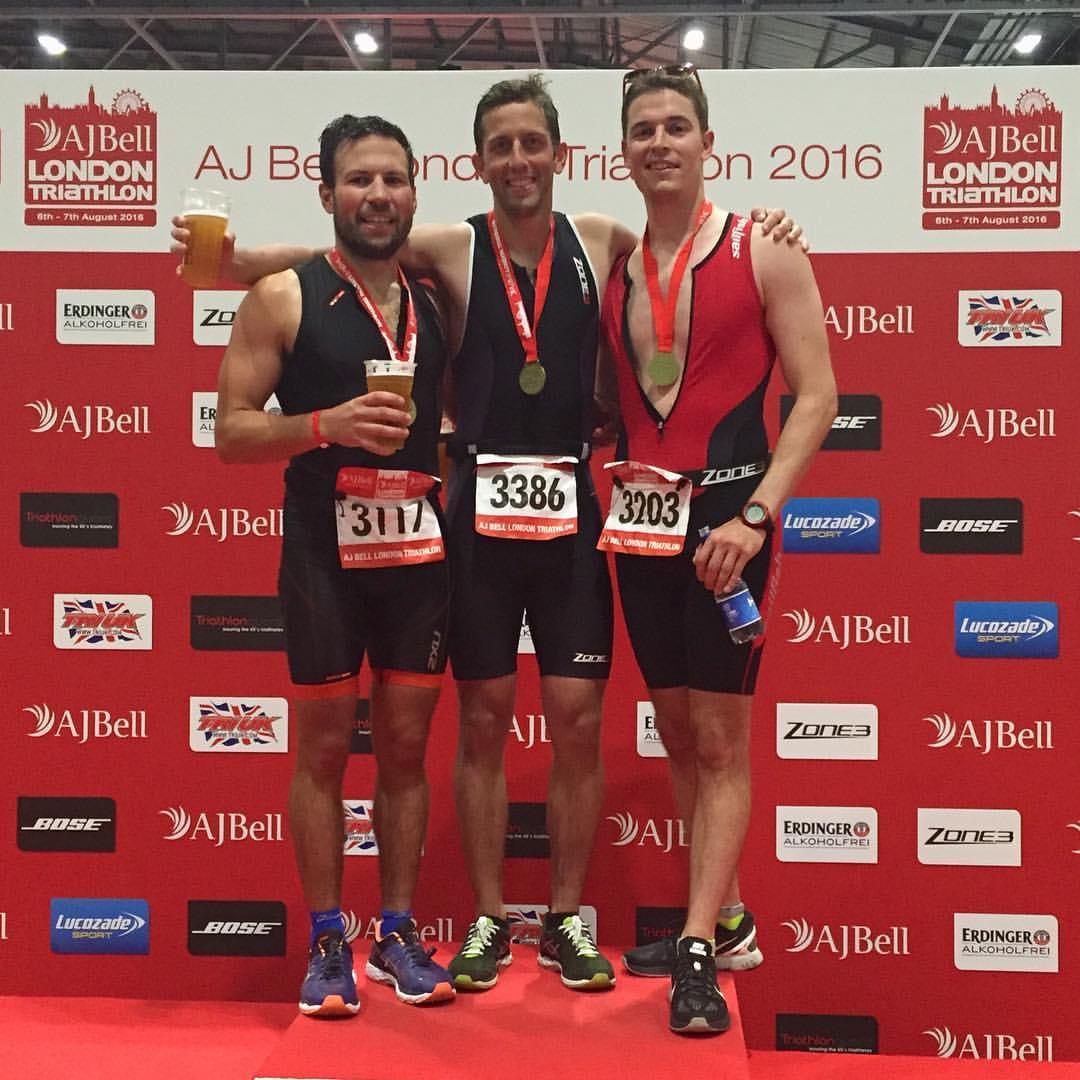 So at long last, it was finally time for me to wrestle with my wetsuit and get to the swim assembly to start the race. Two girls getting ready next to me admitted it was their first triathlon and that made me feel better. I took a few minutes to visualize being awesome, and then headed to the start where 200 other girls were assembling; a bunch of nearly androgynous people sweating in black wetsuits and white swim caps.

During the pre-race brief, one of the organizers asked who was doing a triathlon for the first time, and about 80% of people’s hands shot up in the air. Everyone laughed and started looking at each other. It totally diffused some of the nervousness as we all suddenly realized how much we had in common. We wished each other good luck and then headed to the water.

With 200 girls, the largest wave of the day, it took a long time to get everyone in and settled. I ended up floating in the water for a good 5 or 6 minutes before they finally let us go. I was oddly Zen about the whole thing. For someone who doesn’t even like swimming near someone in a pool lane, I was feeling oddly at ease with the hundreds of other bobbing heads around me. 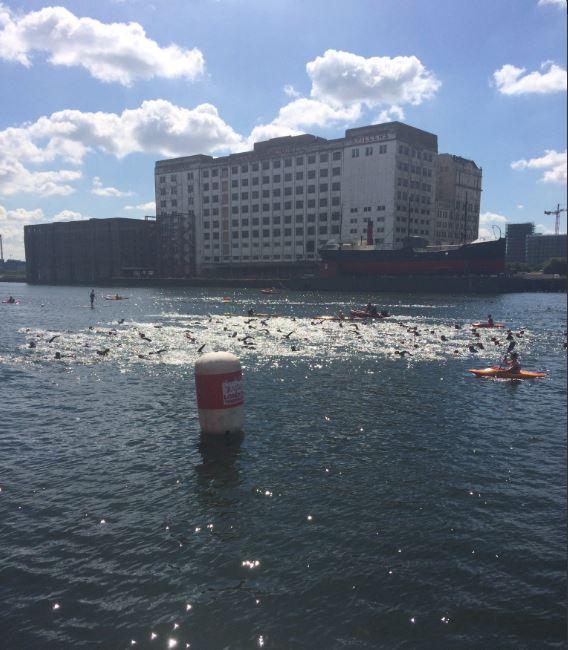 Stranger still was how calm I was throughout the swim. My original plan was to hang near the back, but I quickly realized that my swimming speed was about average and I ended up squarely in the middle of the pack. As a result, there was no point where there wasn’t someone a few feet from me in every direction. This was the very scenario I dreaded. Before the race, I panicked at the thought of such a thing. But oddly, I was completely un-phased and swam my absolute best 750 meters ever – 19 minutes! It barely felt like an effort at all.

My transition was less than glamorous but I managed to hop on my bike about 5 minutes later. I was so grateful for the triathlon suit. It made the transition so much more seamless and as soon as I got going on the bike, it dried in minutes. Worth every cent I paid for it. Who says you shouldn’t try something new on race day?

I managed to maintain an average pace of about 25km/hour in the bike portion of the race, and throughout the 20km course, I was feeling strong and powerful, passing dozens of people along the way. I still haven’t managed to learn how to drink while riding. I tried once during the race, got nervous, and abandoned the drink. I decided I’d have a good drink before heading out for the run. I’d rather be slightly dehydrated than crash my bike! 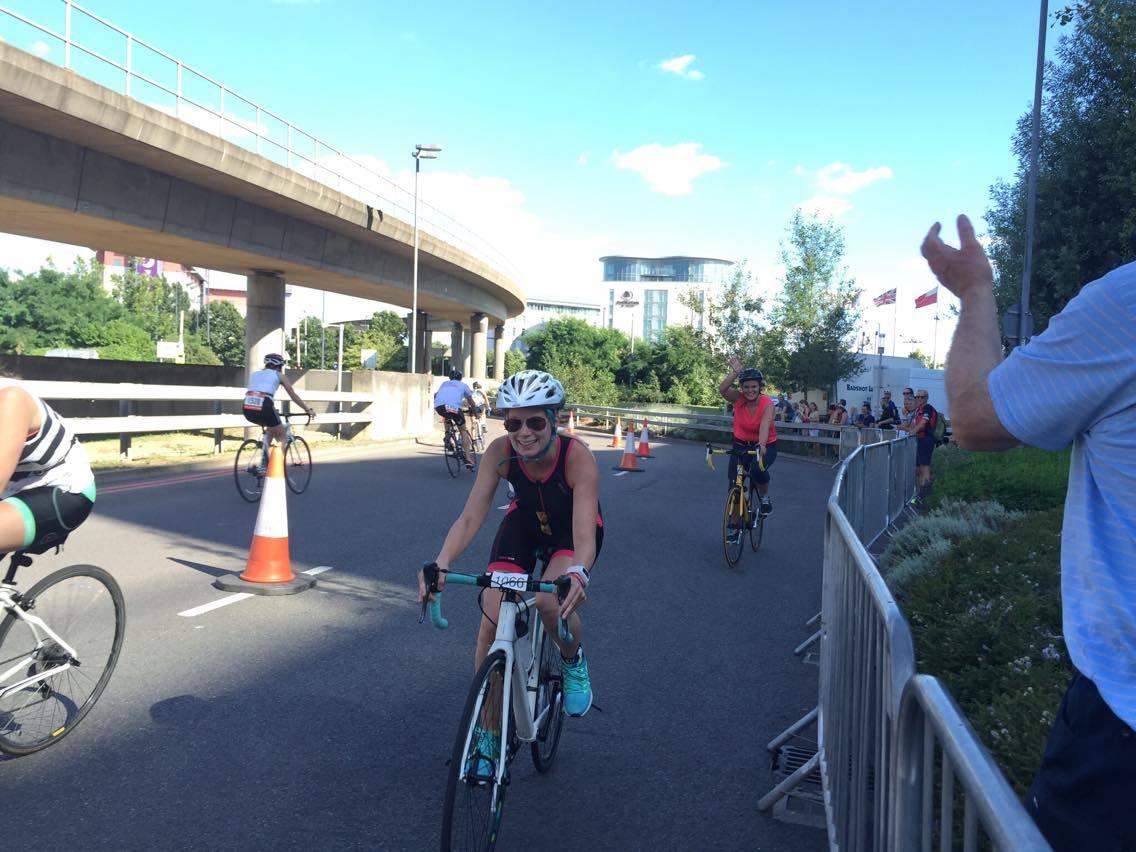 Surprised anyone could capture this photo given my serious speed! haha

My transition to running was a swift three minutes, 11 seconds. I still had lots of energy and was ready to run. Unfortunately, the relentless sun slowed me down and despite the fact that I felt fantastic and was passing people left and right, my average pace was disappointingly slow – about 5:55/km.

I crossed the finish line in 1:47:38, well under my conservative goal of 2 hours. I was very pleased. 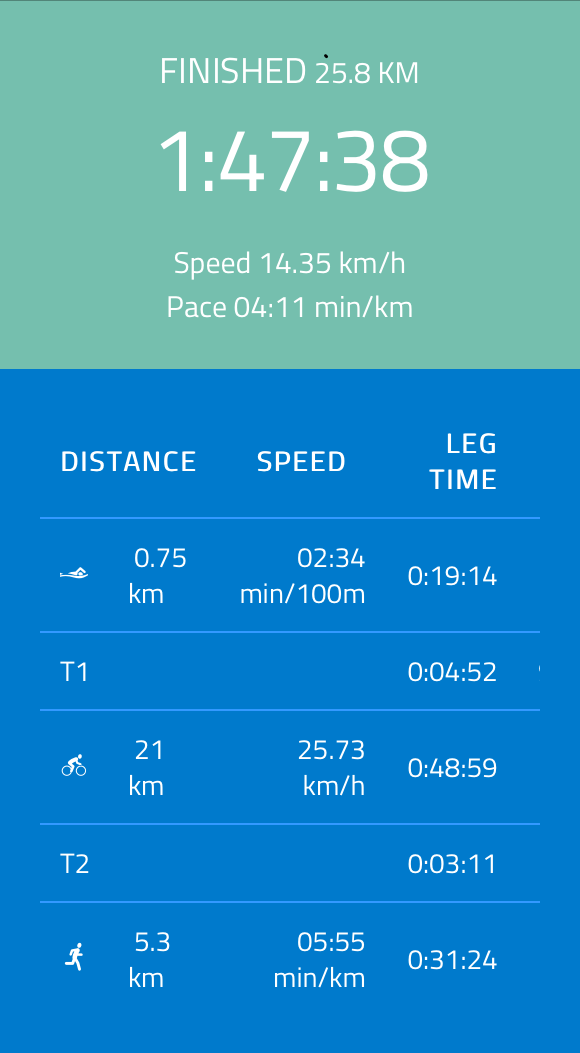 Check out these (totally average) results

After the race, we gathered our gear, which took a while. Triathlons are high maintenance! 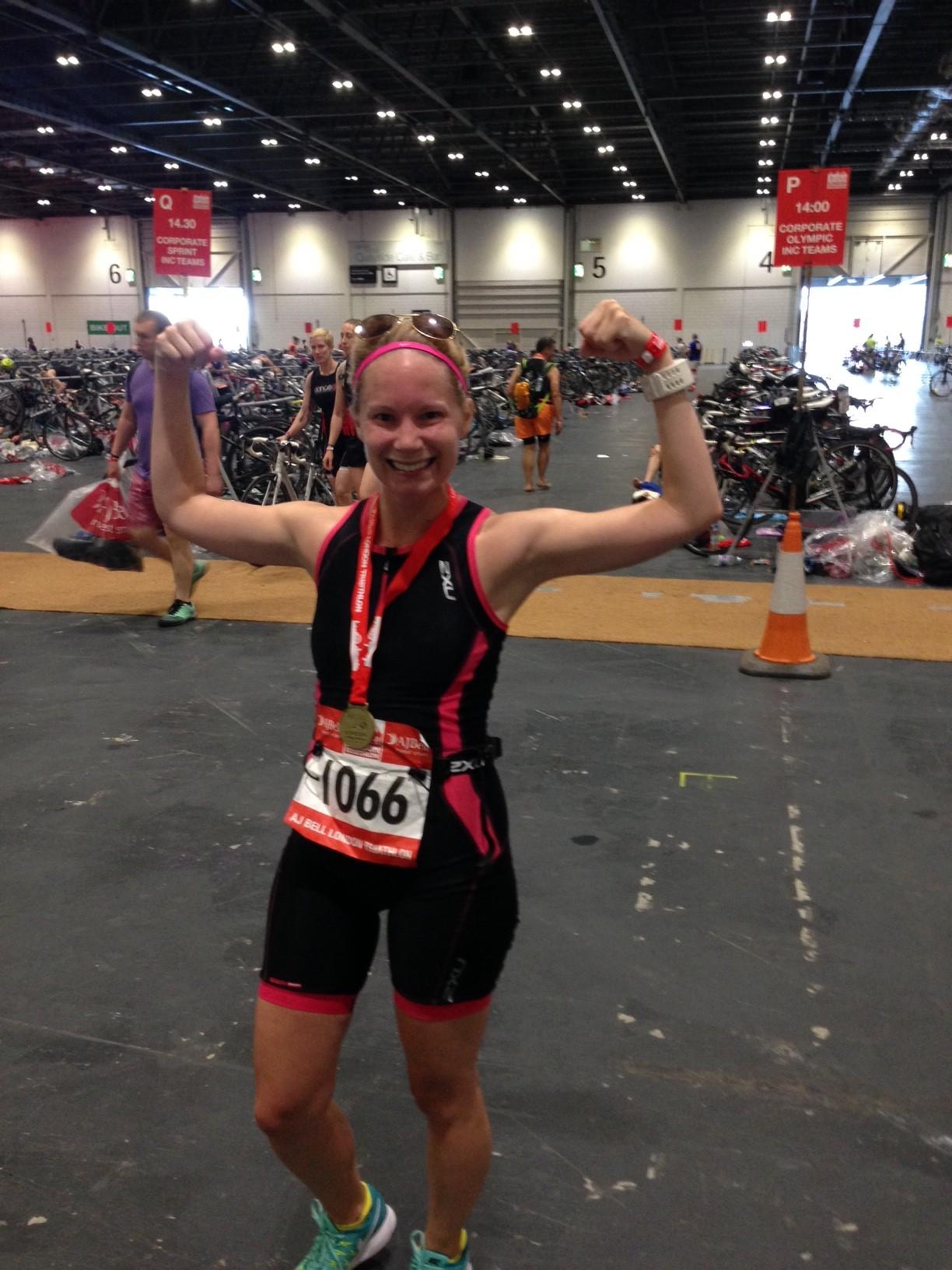 It was already 5pm by the time we left the Excel Centre, so we were all in need of some nourishment. Even cheering for that long is a hard job! We found a lovely Thai restaurant that overlooked the docks where we had all swam earlier that day and I enjoyed some crisp rose and a big plate of Pad Thai. Nomnom…. 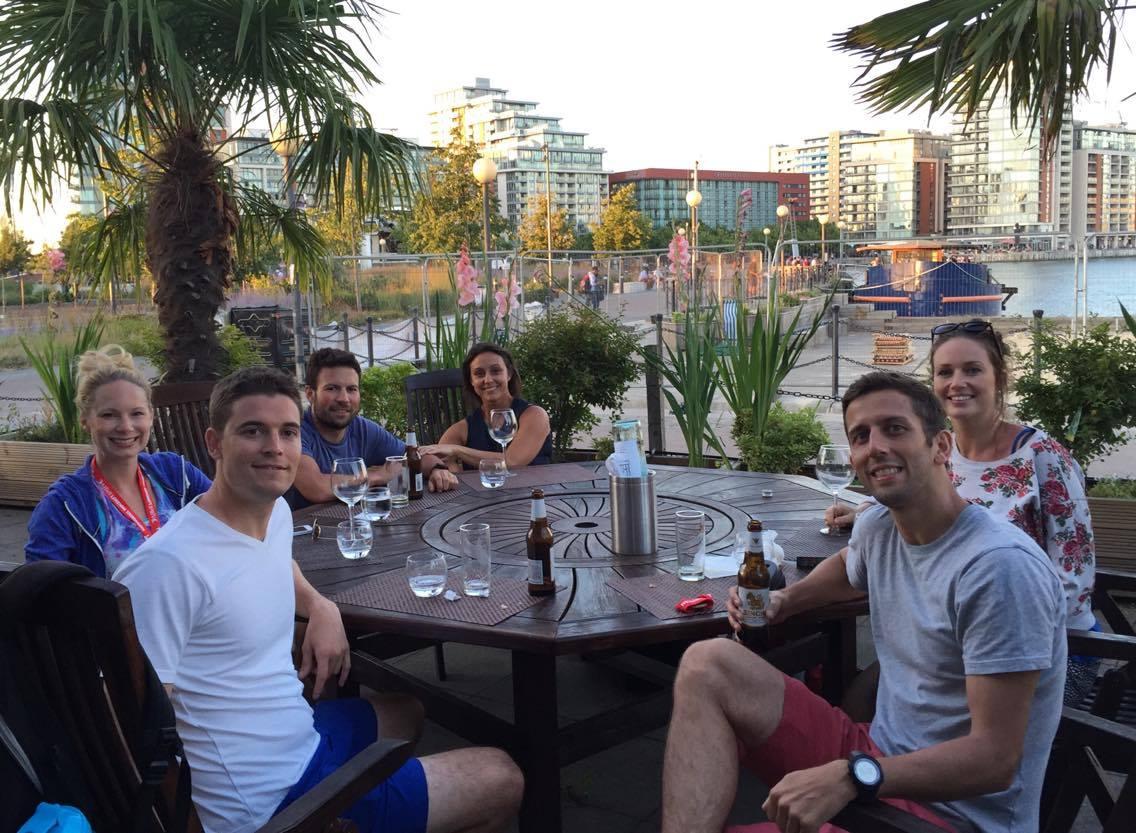 It was such a fun race and I will absolutely do another sprint triathlon! I can’t believe it took me 12 years to finally bite the bullet and do it. I have honestly been thinking about doing a triathlon since 2004. This was truly procrastination at its finest. Maybe this is the post-race endorphins talking, but I think I could even be convinced to do an Olympic distance triathlon at some point.

Big shout out to Clare, Caine, Catrin, Kyle and Graham for cheering so enthusiastically for me, and taking many of these pictures. You guys are great cheerleaders.

And thanks to The London Triathlon for such a well-organized and welcoming event. An absolutely wonderful and inspiring day for a would-be triathlete. I hope to be back next year.