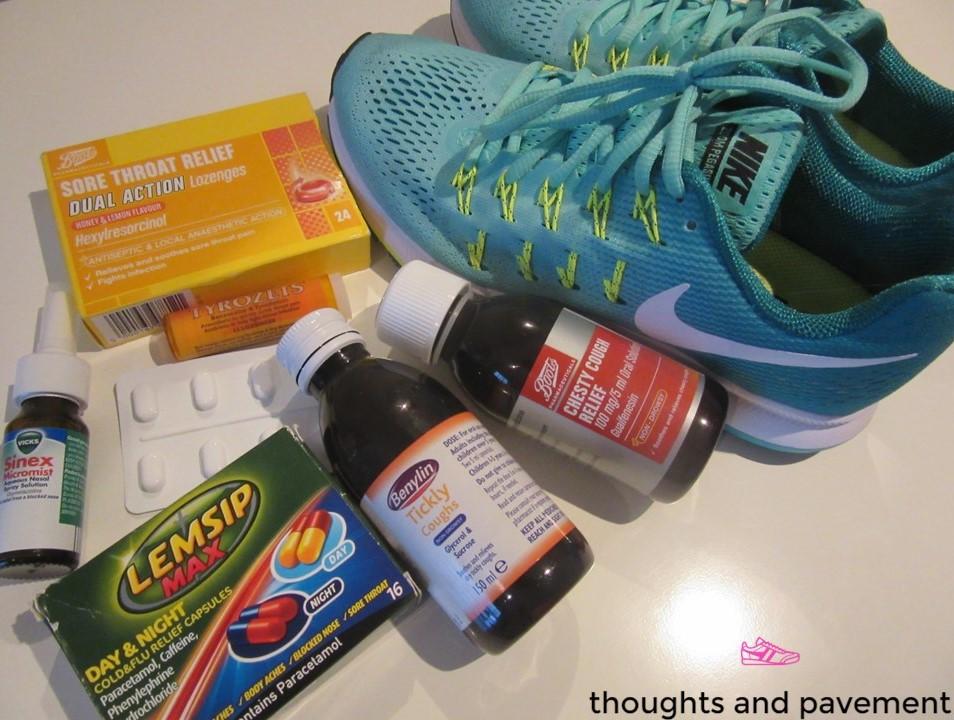 Check out all my drugs! It’s quite a collection.

I have basically been sick for the entire month of July. I got sick early in the month. A standard cold. Nothing major. But enough to make me feel like crap, causing me to work from home for a few days in an effort to keep my germs to myself. I also took 4 days off training altogether in an effort to get back at it in full force. I thought that was very reasonable. My first triathlon is in less two weeks and I have some work to do so four full days of rest and recovery seemed quite generous, I thought. And by day 4, I was saying ridiculous things like, “I have lost all fitness. I need to start again,” or “I probably won’t even be able to run 5K.” My rational brain knows you can’t lose fitness that fast, but my emotional brain was anxious and getting carried away.

As soon as I felt better, I went into super-training mode. I started doing insane things I’ve never done before, like working out twice in one day (what?!) or running to the gym from work and doing back-to-back classes. I think, subconsciously, I was trying to make up for the four days I took off.

It was a stupid move.

I felt super powerful for about a week, but then I got sick again, and I’m still sick, a week later. I guess I was probably never healed to begin with. And, when my weak, recovering body went into Wonder Woman mode, it just couldn’t cope.

Round 2 of the illness was worse than the first. A chest cold this time, and that’s a big no-no for running, or any sort high intensity exercise. A couple years ago, I wrote a post about whether you can run while you’re sick and the general rule of thumb is:

If your symptoms are below the neck (chest cold, fever, body aches, bronchial infection, or cough), you should take some time off. If the symptoms are above the neck (runny nose, sneezing, or stuffiness), you’re good to go.

So now I really screwed up. I took another three days off and am back at it, but very gently. I’m forcing myself to go easy, which in my world is one very light workout a day. I ran home from work tonight – a mere 2.5K – and felt great. I even wildly entertained dropping my bag at home and running another 5K along the canal. But as soon as I got to the flat, I started coughing uncontrollably – my body’s desperate plea to rest. So, I came inside and ate spaghetti instead.

I suppose the bottom line is listen to your body, not your training schedule. If you’re still confused about when it’s OK to run or train when you’re sick, check out this handy “Should I Run” flow chart from Women’s Running.