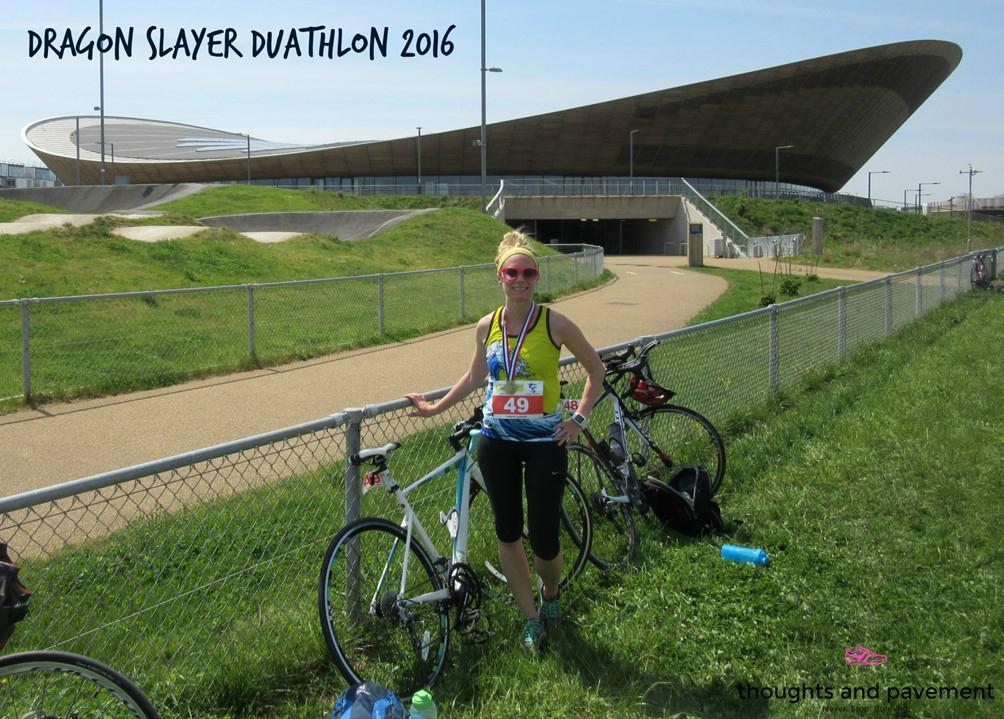 Check out the cool velodrome behind me!

As the name might suggest, the Dragon Slayer Duathlon was intense. Not only was it on the hottest day of the year (26C! WHAT?!) but it was my first real ride on my new road bike. On top of that, it was also 50% longer than the duathlon I did back in February.

The race was at the Lee Valley Velopark in Olympic Park on a 1 mile track. It consisted of a 3 mile run, a 15 mile bike ride and a 2 mile run. My entire race strategy was thrown into chaos with the added challenge of the 15 mile bike ride. I had barely ridden my bike, except for a few jaunts around the city streets which were stressful and slow. Seriously, cycling in London is terrifying. I had never really tried to go fast, let alone race. I also didn’t know what the hell to wear. I haven’t run in temperatures over 20C in a looong time. I broke the cardinal rule of race day: I tried something new. I put on some running shorts thinking I’d be cooler in the blazing heat. But once we got to the park, I realized there’s a reason why cycle shorts are longer than running shorts! So your inner thighs don’t chafe! Worried that my legs would look like ground beef by the end of the race, I changed into a backup pair of black capri tights I brought just in case.

Before the race, I nervously glanced around at our wave of participants. 75 elite humans, all decked out in serious triathlon suits with £10,000 bicycles and aerodynamic helmets. I was intimidated. I haven’t felt that nervous before a race in a long time. I fretted about everything. Sunglasses or no sunglasses? Bring water and try to drink it on the bike? Will I fall off? How do I eat a gel while riding? Ahh!

It didn’t matter. The race started and I just had to do my best. The goal: don’t come in last. Which honestly, was a very real possibility in this field of athletes.

The first 3 miles were fine. Hot, but OK. I kept a decent pace and fell into step with some runners about the same speed. I hopped on my bike and off I went, thrilled to see that my Nike+ GPS watch was actually tracking laps properly. This was a big weight off my shoulders because you have to count your own laps. This would ensure I wouldn’t lose track.

My new bike was awesome and a HUGE difference from the borrowed hybrid I rode in the last race. I finally had a chance to see how fast I could go and after the first tentative lap or two, I was zooming! Or so I thought. You know, there’s pros and cons of racing with people that are way better than you. On the one hand, it’s inspiring and motivating to watch such great athletes, but on the other, it’s pretty rough on your ego. I was lapped several times by some of the really fast cyclists and when some of them started their final 2 mile run, I still had FIVE cycle laps to go! It was a bit demoralizing.

Somewhere along the line, I managed to extricate a gel from my back pocket and eat it without crashing. That was helpful. The heat was making me sweat more than usual.

Once I finished my 15 miles, I thought that I might be able to make up some ground on the run. Hah. That was optimism at its finest. What I neglected to remember was that 15 miles was possibly the longest bike ride I’ve ever done in my life. So no wonder my legs felt drunk when I finally started to run. I’ve done plenty of bike/run workouts to know that your legs hate going from cycling to running, but this was really rough. I literally could not make them move properly. Sadly, I had to stop and walk a few steps here and there. I felt like I might die. I think I said that to Graham as I limped by as he was finished the race while I still had a mile left to run. One long, horrible, tortuous mile.

At long last, I crossed the finish line, totally drained and slightly delirious. I finished in 1:43:44. Not last… but close. In a total field of 123 finishers, I came in 105th! But with no real goal in mind or any benchmark set, I can safely call this a personal best! I also compared my results to the last duathlon and was pleased to see that I shaved about 20 seconds per mile off my cycling time: about 3:40/mile pretty consistently for 15 miles. All credit goes to the new bike.

Once I had a few moments to collect myself, I felt pretty proud of the accomplishment. It was a hard race. Way harder than I was anticipating. Like half marathon hard. And we did it on the hottest day of the year. We are awesome.

The race is super well organized. Small and lovely with enthusiastic volunteers cheering at various points along the 1 mile course. They also had a water station this time and music playing at the finish line, and I’m always impressed with how quickly they send the race results out. There were also several photographers on the course. I look forward to / dread the pictures!

Big shout-outs to Caine and Graham who crushed the race with amazing times and for cheering for me on my final, horrible lap around the track.

Looking forward to the next event at the Velopark!

Special thanks to the East London Triathlon Club for the great event pictures! 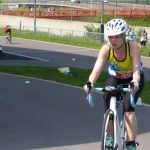 No one looks cool in a helmet. 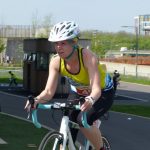 Of course, they would capture me up the steepest hill. 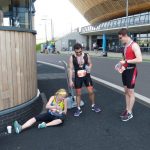 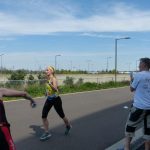 Graham high fives me as I cross the finish line 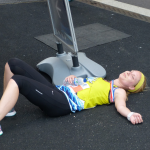 It was a really hard race 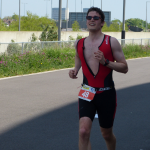 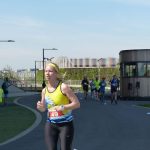