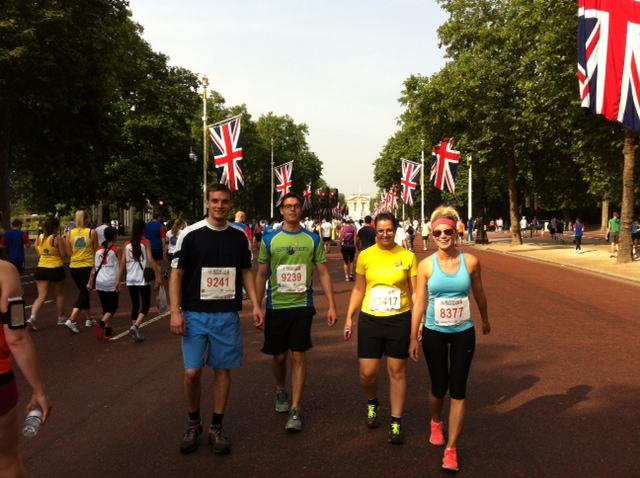 Walking down The Mall in London in 2013, getting ready for the British 10K. Might I find myself running here again in 2017?

On Monday, the ballot for the 2017 London Marathon opened to the public. The date was marked in my calendar so I wouldn’t forget. Just like last year, I filled in all the details and as I clicked submit, I was filled with a combination of both dread and excitement. Do I really want to run another marathon?

The chances of getting into the London Marathon are extremely low. For the 2016 race, a record total of 247,069 people entered the ballot. They accepted 50,000 runners. And interestingly, only 39,000 were on the start line on 24 April this year. Apparently that is how many people drop out due to things like injury or illness. Seems high… but after 35 years of running this race, this is apparently the average proportion of drop-outs, accurate within 1%!

So, I’m not a numbers girl, but overall, the odds look pretty bleak, which is not necessarily a bad thing. I basically assume it is fate. If I get in, it was meant to be and I was meant to run another marathon. If not, well, that is the universe telling me to stick to shorter distances. I can’t really think of another marathon that I would be compelled to run. London is special. It’s my second home now and it’s an iconic race – one of the World Marathon Majors. Running London would be epic.

After my first and only marathon in 2013, I collapsed at the finish line and said, “never again.” Not a chance in hell would I ever go through that grueling process again. But like many things, time heals all wounds and I’m starting to feel a little nostalgic for the awesome, life-changing accomplishment that is completing 42.2. I’m reading Marathon Woman right now, the memoir of Kathrine Switzer, the first woman to run the Boston Marathon as a registered participant in the late 60s. It’s inspiring and wonderful and it’s fueling my desire to be lining up at the start line next April. I’ll find out in October if I was one of the lucky ones. A birthday present perhaps.