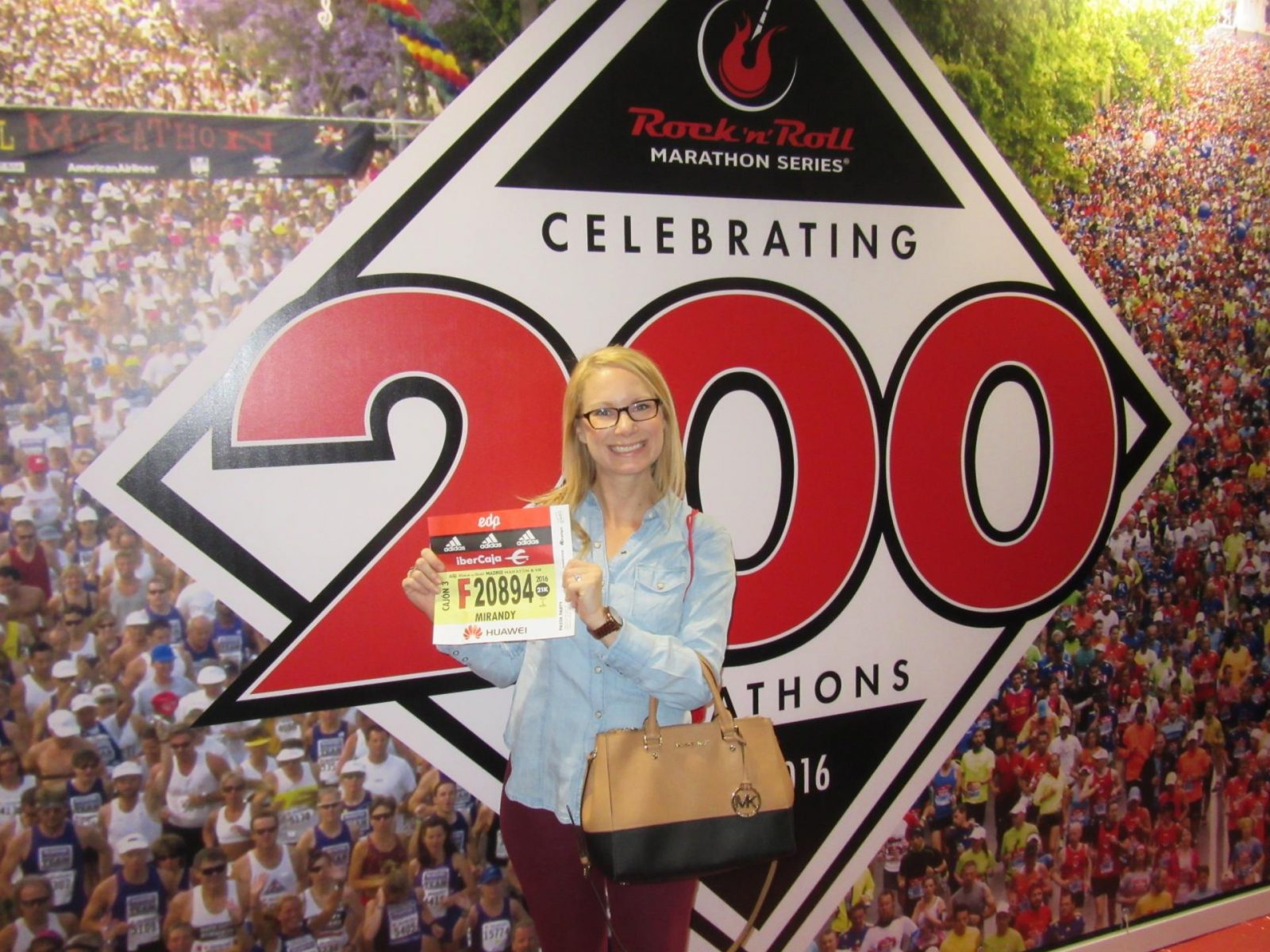 So it turns out I have no will power. I should have known that going to Madrid – the land of beautiful wine, great tapas and late night parties – would conflict quite significantly with running a half marathon, but alas, I was naïve. I thought I could exercise extreme self-control, and save all the indulgence until after the race, but I failed. And my half marathon time shows it – 2:04:28. More than 6 minutes off my personal best!

Nevertheless, we had a wonderful time in Madrid, sight-seeing, sampling the fine cuisine and running my 7th half marathon. The Rock n’ Roll series of races are special because they are deemed the world’s largest running series with more than 500,000 people taking part in 30 cities around the world. The race in Madrid had three distances: 10K, half marathon and full marathon and is the largest running event in the city. It was also the first time I had ever travelled anywhere exclusively for a race.

The day before, we tried to limit our wandering around to save our feet for the race, but we didn’t do a very good job. First, we had to venture to the Race Expo. I think I sort of neglected to realise that everything would be in Spanish but despite the language barrier, we picked up our race kits without issue and wandered around the Expo looking like lost tourists. We couldn’t understand anything that was being said or read any pamphlets that were being handed out. So we took a couple pics and headed back to the city in search of fun. We ended up at the Mercado San Miguel and that’s where all will power was lost. We just couldn’t give up the opportunity to sample some oysters and a glass of champagne! 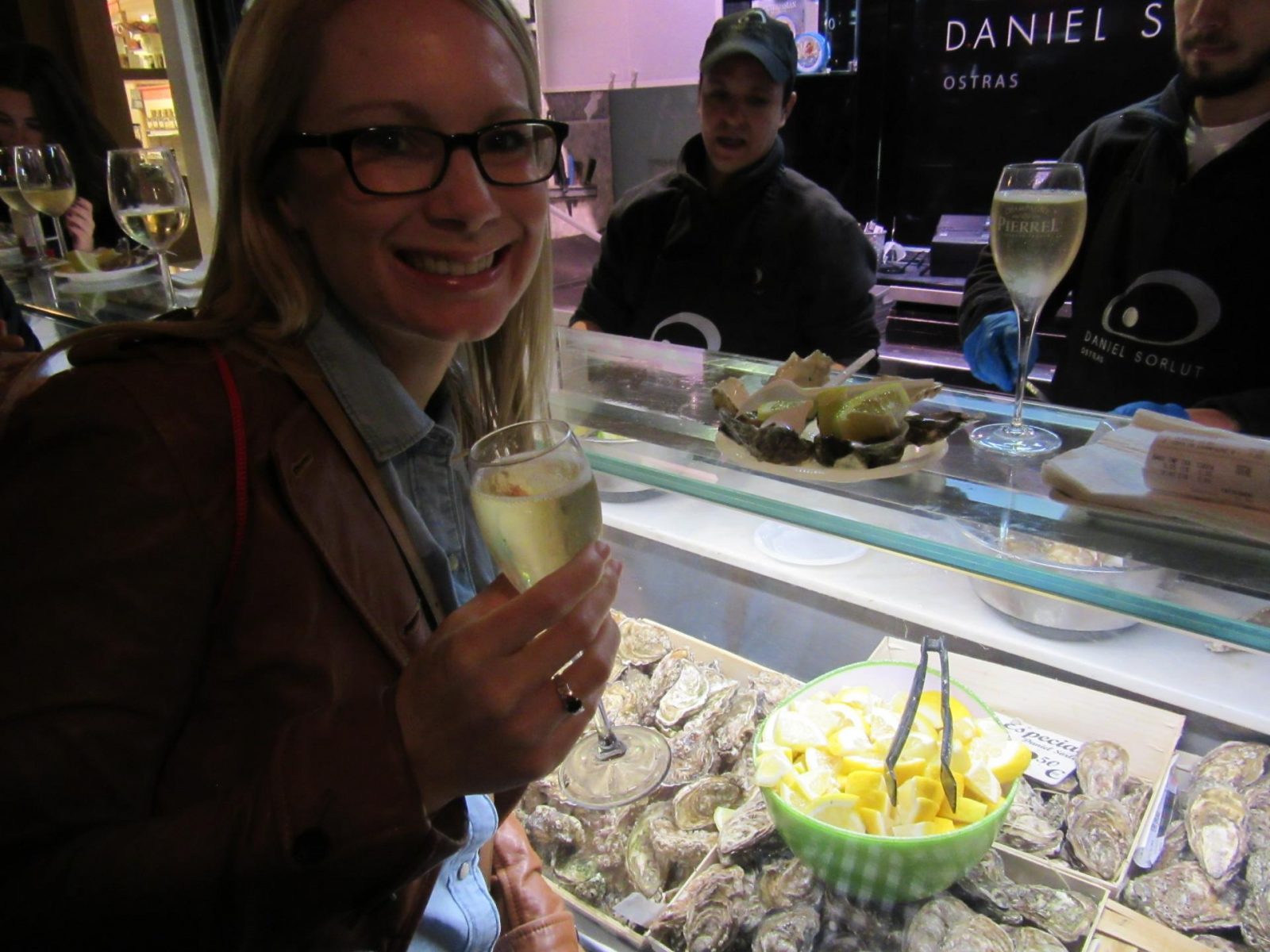 Later that evening we went to a Flamenco show, and the ticket came with a glass of wine. So of course, we indulged again. My pre-race meals consisted of oysters, champagne, a full pizza with loads of cheese, a paella and a glass of red wine. Exactly what all the elite runners were eating, I’m sure.

Despite the amazing party scene all around us, we were actually responsible and tried to go to sleep early. But Graham got hungry and ended up sneaking away while I was dozing off, returning the room with a plate of tapas at midnight. I indulged in a few nibbles of a tiny hamburger while laying in bed. A new low.

Race day arrived and luckily, our hotel was walking distance to the start line and the weather was glorious so we didn’t need to wear a coat or check any bags. We easily found our corral and before we knew it, we were off! 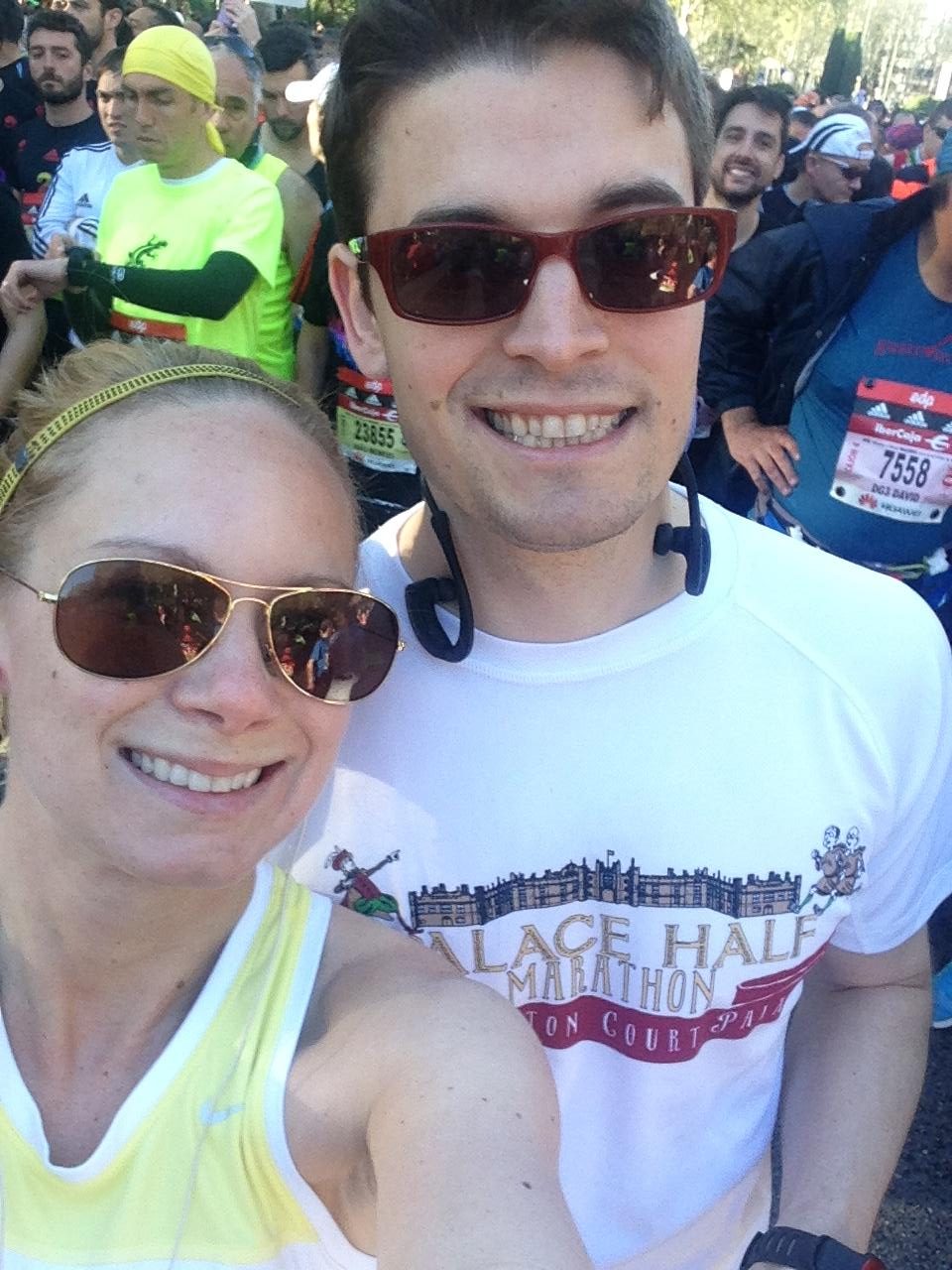 While I did check the route and elevation before we left, I really didn’t appreciate how hilly the course was. The first 7K were all up-hill and it destroyed me. I could not keep on pace and I was exhausted. By the time the rolling hills started, I was already spent but we weren’t even half way there! Thankfully, Graham ran with me the whole time and he had a great race, happily listening to his audiobook the whole time. I couldn’t get my music to work, so I had the Spanish encouragement from the crowd and the occasional band along the way. There were 7 bands along the race route. I needed there to be 20. At one stage, Graham asked how I was feeling. “Like a sack of potatoes,” I said. “With brick legs.” A sub 2-hour time was not in the realm of possibility.

But the sunshine was glorious and the route was pretty. I made it up the last hill, breathless and exhausted, at what felt like barely above a walk and mustered up the rest of my stamina to push the pace until the finish line. Just by sheer coincidence we finished the race alongside the first place male elite runner, who was finishing the full marathon around the same time I was finishing my half! Both maddening and inspiring, really. But it did give me a little burst of energy at my absolute lowest point. 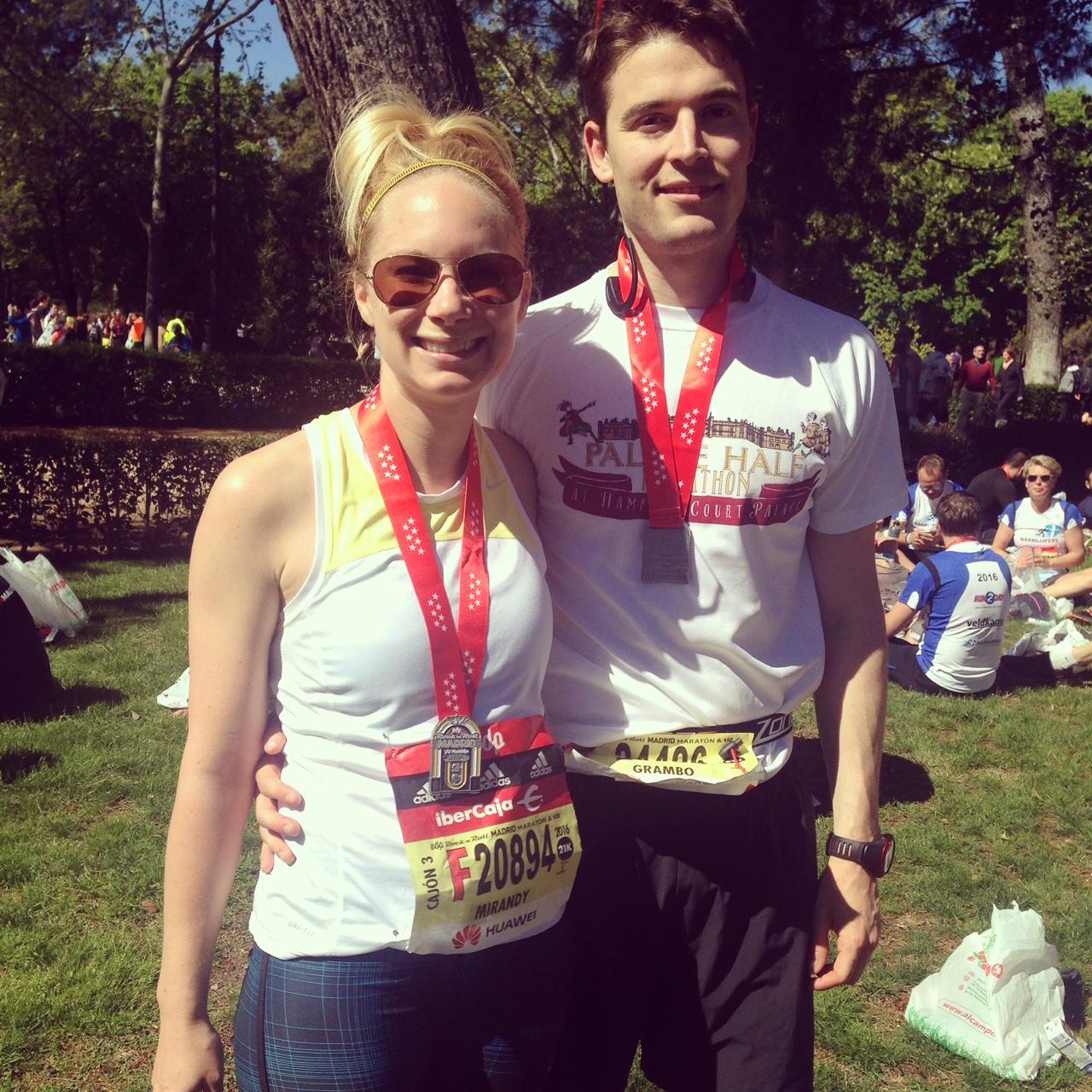 Ugh! It was so tough! 21K of pain! I was a bit disappointed with myself, but I tried to get over it and just enjoy the fact that we could stretch in beautiful Retiro Park in the sunshine. It was just what I needed to let any lingering disappointment completely disappear. 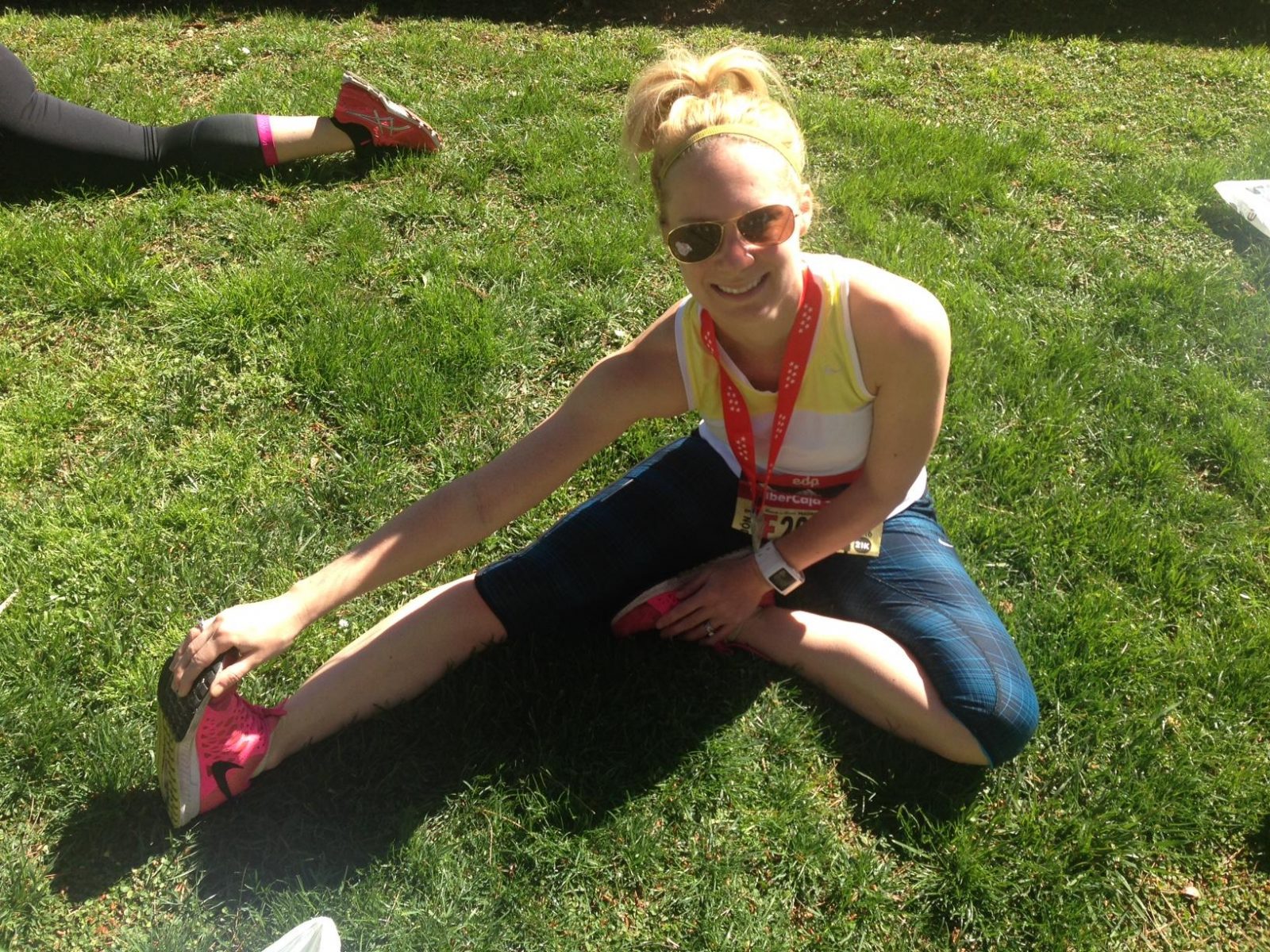 Don’t mind the disembodied leg in the background

We walked slowly back along the race route, watching the end of the marathon and eventually made it back to our hotel. The 25 steps to our room felt like 200. We showered and rewarded ourselves with sangria and a giant seafood paella. We then went back to the hotel and I slept for two hours. 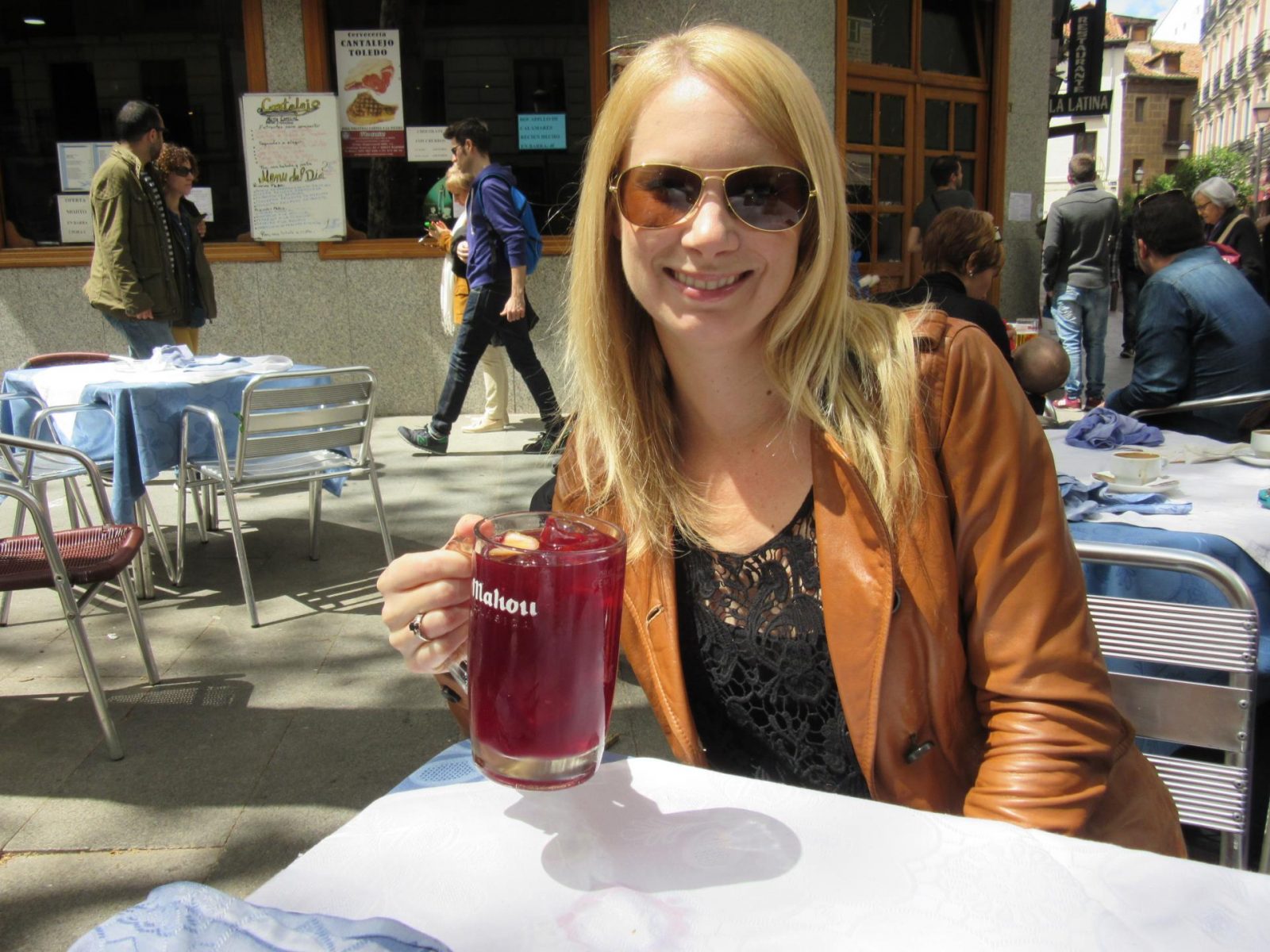 Overall, such a great, well organized race with great energy. Highly recommend the Rock n’ Roll series of races. If you have a chance to run one, it’s well worth it.