After running the Richmond Half Marathon last week, the idea of a 5K seemed pretty easy by comparison. That is, if you’re not totally sleep deprived, hungry and hungover.

We returned to Toronto for a wedding, and my lovely mother-in-law signed us up for the Yorkville 5K on Sunday morning. I figured that I would try to behave myself at the wedding, and if I was a bit tired, so what? It would take longer to get to the start line than to actually run the race, so I figured I would be back in bed resting in no time. Also, I was excited about running this particular race. Not only did it come with the BEST race kit of all time (a long-sleeve New Balance tech shirt, New Balance capris AND a black New Balance tshirt!), it also boasted a fabulous post-run party with tons of food like pizza, gourmet sandwiches, baked goods and cold-pressed juice.

Clearly, I should know myself better. I drank a lot of white wine and danced around all night in bare feet, and actually cut the bottom of my foot on some broken glass. Whoops. I had such a great time socializing and dancing with my friends that I also kind of forgot to eat. I think I ate a tiny pulled pork slider at some point… and I have a vague recollection of eating a rib while on the dancefloor. Sigh…

When the alarm went off Sunday morning, I was not in great shape. But I pulled myself together, got in the car and headed to the race. It was quite cool and a bit drizzly but I was thankful. Add some humidity to the day and I would have surely been sick at the start line.

The race started off with a nice gradual downhill so I got off to a great start. And as soon as the competitive drive of race day set in, I managed to maintain my pace as the road levelled out. I kept telling myself that the faster I went, the sooner it would be over. I crossed the finish line next to Graham with a time of 27:42, a mere 12 seconds off my personal best for 5K.

And just like that, my hangover was gone! Hooray! I was able to properly feast on the plethora of lovely snacks, promptly consuming 5 times more calories than we burned.

The best part of the day was that two members of our group – Ian, my father-in-law, and Keith, my uncle-in-law placed in the top three of their age category. What a day for the Markham fam! I was so proud to have two members of our team accepting some well-deserved race day hardware. Very inspiring.

And speaking of hardware, check out the picture of the medals they gave us! They are massive! A very large medal for a very short race.

A big shout-out to my mother-in-law Janet for organizing the day. I am sorry for being a grump on the way there. I did truly enjoy myself in the end. Also big shouts to brother-in-law Andrew who ran the race in borrowed, decrepit shoes with a hole in the bottom and still got a blazing fast time. And congrats to his girlfriend Lesley who did amazingly well despite claiming that her goal was to not be last! We were pretty spectacular, all things considered. 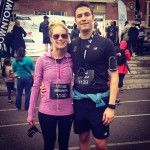 Only 12 seconds off my personal best. Not bad all things considered! 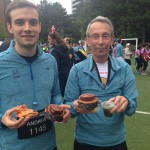 Forget the stale bagels and bananas! We had cold pressed juice, cinnamon buns and pizza! 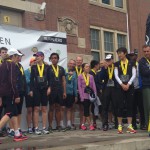 Category winners on the podium to receive their second medal 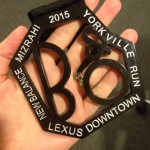 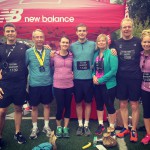