Two 10K races just 6 days apart? Why not. Following our amazing race in Corsham, Graham and I decided we’d sign up and run the Richmond Park 10K and see if we could improve on our time from the week before.

It was not to be unfortunately. With the race starting bright and early on Saturday morning, we had big plans to head home after work for a healthy dinner and a quiet night. Wild Friday night plans, I know. However, we were wooed into one glass of wine with colleagues. That glass of wine quickly became two. Then three.

Before we knew it, it was getting close to bedtime, and not only had we drank copious amounts of alcohol, we hadn’t eaten dinner. Whoops.

Needless to say, we managed to eat some food and put ourselves to bed at a decent time. At least we weren’t low on sleep.

We woke up dehydrated to a grey, gross day. It was cool and pouring rain. My motivation was low.

I’m sad to report that talk of deer sightings were greatly exaggerated. At one point in the race, Graham looked across an open field and said, “Look! A deer!” I squinted at the brownish-red figure in the distance. It set off running and we both immediately realized it was a dog. Albeit, a large, deer-like one. But a dog nonetheless. Other than that, no deer were seen.

The race was tough for both of us. The first 3K seemed to be entirely uphill and my attempt to maintain my 5:20/km pace was a struggle. I knew I couldn’t keep it up. The race consisted of two 5K loops and I sincerely regretted not signing up for the 5K. I was definitely ready to quit after that first loop. We both finished the race but it certainly wasn’t a personal best. I crossed the finish line at 55:41 and Graham was shortly after me at 56:41. All things considered, not a completely terrible race.

We saw our friend Tori near the last 1K and it was a much needed boost. As she chased alongside us trying to take pictures, she encouraged us by yelling out that we’d go for a beer after the race. It was very appreciated because I was fading fast. The sun had come out, I was tired and sweaty and at that point, I realized I wasn’t going to see a deer. Tori had run the 5K, and actually came in 2nd place out of all females in the 5K! She humbly mentioned this fact as Graham and I huffed our way across the finish line.

After the race, we casually made our way through the park to the pub. It was a much nicer walk then run and I could actually enjoy the pretty landscape.

There’s no shortage of races in London. We could honestly run a race every weekend if we wanted, but this is the last official race on the horizon for now. However, inspired by the recent Boston and London marathons, we’ve decided we’re going to put our name in the ballot for entrance into the 2016 London Marathon! It’s a low chance we’ll get in, but worth a shot. I feel like I have one more marathon in me and London is a pretty epic one. 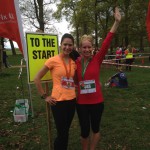 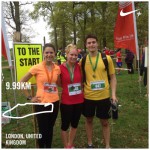 The route was apparently .01 km short of 10K. And no, I did not have the energy to run that last 10 meters. 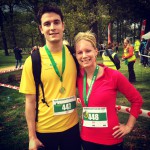 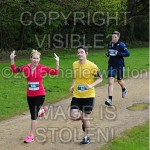 Less than 1K in when we were feeling enthusiastic. This quickly ended. (Don’t mind the intense watermark! STOLEN!!! #Sorry)