My first race of 2015 was a memorable one. In addition to it being my most hungover race to date, the St. Patrick’s Day Festival 5K was also my first race in the lovely city of Dublin.

While the race organizers generously made the start time of this race 12 noon, it still felt like an early wake-up call. After a festive day visiting many pubs in the Temple Bar area, I did realize this might be a struggle, but I was determined to run this race. Not only would it be an epic start to the 2015 race season, it would be a great way to see some of Dublin given our short weekend visit. And besides, it was just 5K.

I have to say, I was feeling remarkably fresh on Sunday morning despite the day of drinking we had. I woke up in a panic at 8 am, totally convinced that I had forgotten to take my contacts out and not set an alarm. Instead, I woke up to discover that I had not only taken my contacts out, I had washed my face, laid out my race clothes, plugged in my phone and set my alarm. Relieved at my drunken planning, I went back to sleep for several more hours.

When the time finally came to wake up, I was feeling alright. My husband probably would have liked to have done anything but run a 5K but he very kindly got up and headed to the starting line with me.

We decided to walk the 2K from our hotel to the starting line in search of food. We found a place selling nice sausage breakfast sandwiches – exactly what we needed before our run.

We arrived at the starting area and it was rather quiet. I was starting to think that many people had the same idea we did and decided to bail at the last minute. We got to the Round Room in Mansion House, the building where you picked up your race bibs, and discovered hundreds of people milling around waiting for the race to start. There was a nice little Irish quartet complete with harpist welcoming people to race day – exactly as you’d expect on St. Patrick’s Day in Dublin.

Oddly, race participants were encouraged to pick up their race bags and shirt before the race. I had to kindly decline the various treats, since I had nowhere to store them, but decided I’d grab a souvenir shirt and tie it around my waist. Running with a bag of popcorn in hand would have been more of a challenge.

Pre-race information boasted enthusiastic spectators along the race route. In reality, there were very few. Like three. I think they accidentally stumbled upon the race on their way home from the previous night’s pub crawl. Very few people seemed to care about the race!

That said, there were more than 1,500 participants in Sunday’s race. It was won by a guy named John Coughlin who ran the 5K in a blazing 14:32. He was clearly not out drinking the night before.

The race route was pretty and the weather was mild – perfect running conditions actually. There were lots of serious runners, and some not-so-serious ones wearing silly St. Patrick’s Day inspired costumes. It was clear that some people were just there for a casual run, and others were really trying hard. It was a nice mix.

Despite our hangovers, we ran at a respectable pace. Fuelled by race-day adrenaline, we became determined to finish in under 30 minutes. With a big push at the end, we just made it. Graham finished with a time of 29:26, and I finished in 29:28.  Not our finest performance, but given the conditions, I’m pretty proud of us.

We celebrated by – you guessed it! Going back to another pub! But this time for lunch… and water. 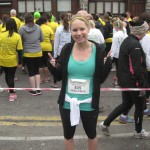 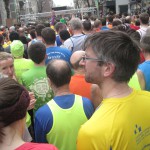 From the starting line… 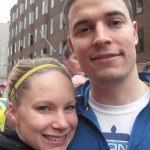 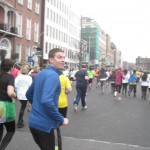 My attempt at in-race photography 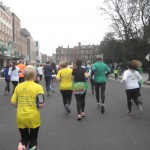 Another attempt… I gave up after this. 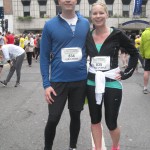 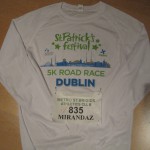