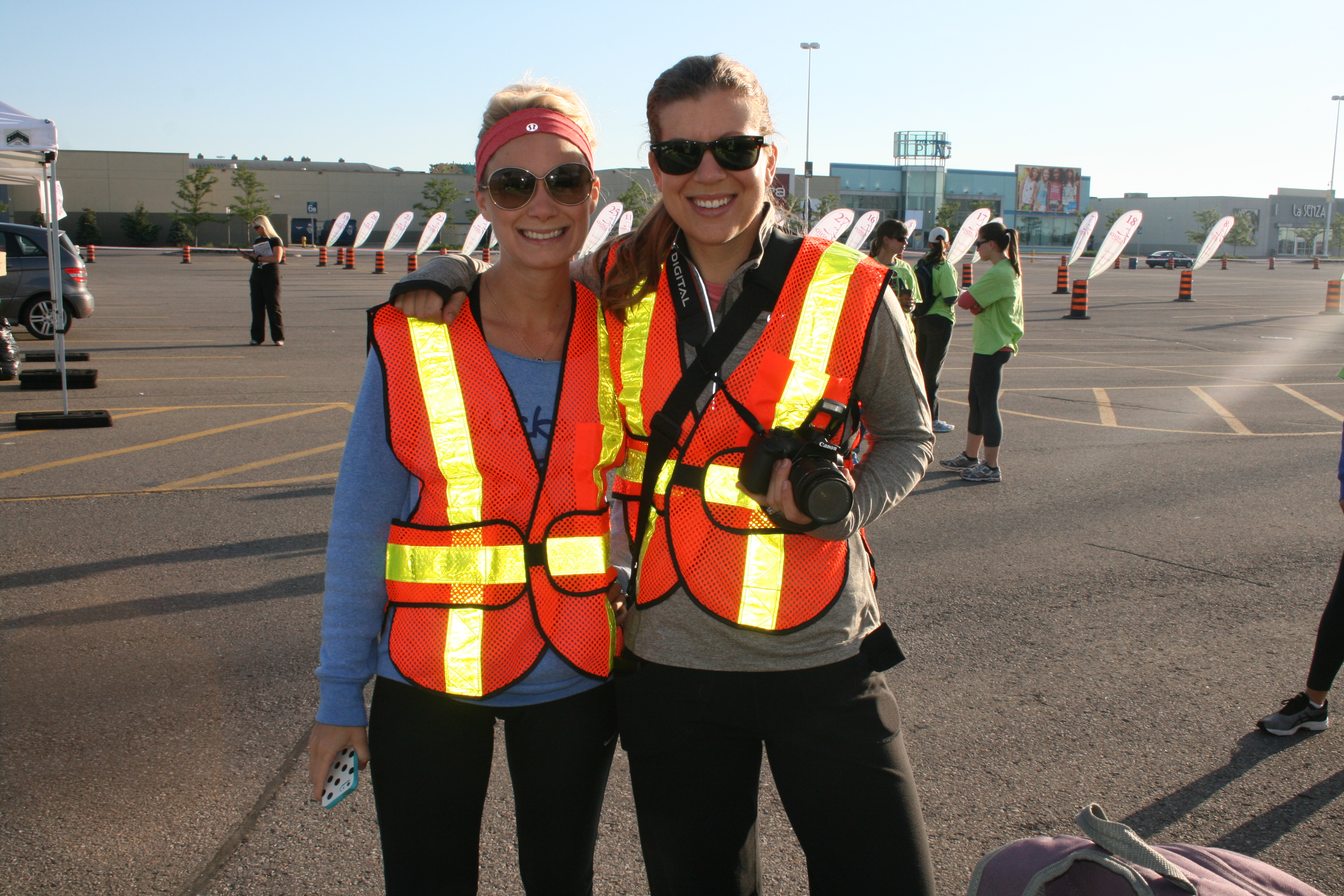 Fellow volunteer Allison and I looking very official in our vests.

For the past several months, I’ve been volunteering with an amazing charitable organization called Girls on the Run. It’s an after-school program for Girls in Grades 3-8 that helps improve self esteem, health and confidence through a 10-week program that creatively integrates running. The program ended this past Sunday with a 5K run in Vaughan.

In addition to sporting an ultra official looking security vest, my role during the event was to live tweet from the @GOTROntario Twitter account, capture pictures from the event, and do some on-camera interviews with some of the girls, parents, coaches and sponsors.

There aren’t many things in this world that can get me out of bed at 5:30am on a Sunday morning, but this is one of them. We arrived as the sun was rising to a pretty empty Vaughan Mills parking lot, but over the course of the next couple hours, the space came to life.

You could literally feel the excitement as the girls – all 1,100 of them – started to arrive. Their energy and enthusiasm was contagious. If my body wasn’t so decrepit from the previous day’s O Course, I probably would have wanted to run with them.

Cityline’s Tracy Moore was on-hand to kick off the event. She’s been a long-time supporter of Girls on the Run, even before she had her own children. You can read her blog post about the event here.

Finally, the race began. I use the word “race” loosely. This is not a competitive event. It’s not timed and every girl wears the number 1 on her bib. There’s no prize or shout-out for the winner and every girl gets the same praise and congratulations whether she was the first one across the finish line, or the last.

I’ve run plenty of races, and I know how it feels to cross the finish line, but I’ve actually never been on the other side of it, watching as runners complete their race. It was truly one of the most touching and rewarding things I’ve done in a while. Many of the girls ran with their moms or dads. Many ran with classmates or coaches. They crossed the finish line holding hands. They hugged and high fived. The look on their faces was just priceless. So proud and confident and happy. This is what running is all about. Seeing their smiling faces as they crossed the finish line was a great reminder of why I run.

I always believed in the value of this program, but talking to the girls after the run ended really made me realize how influential Girls on the Run can be. Not only does this program get girls running and exercising, it also teaches them to manage life’s many challenges including gossip, bullying, friends and standing up for themselves and others.

While I know that many won’t become runners, I hope they carry the lessons from this program, and the amazing feeling of crossing that finish line with them long after the race is over.

I want to give a HUGE shout out to the race committee. Volunteering can often be a pretty thankless job, but never in my life have I felt so appreciated. The team was amazing to work with – a tireless, hardworking and inspiring group of women. And a big high five to Tim Hortons for being cool sponsors. Who doesn’t like a good cookie after a run? Also, thanks to Vaughan Mills for the incredible venue for the race. And finally, thanks to Mother Nature for not sucking. Apparently this is the first race in 11 years where it hasn’t rained!

If you want to check out some pictures of the event, you can see them on my Flickr page here.